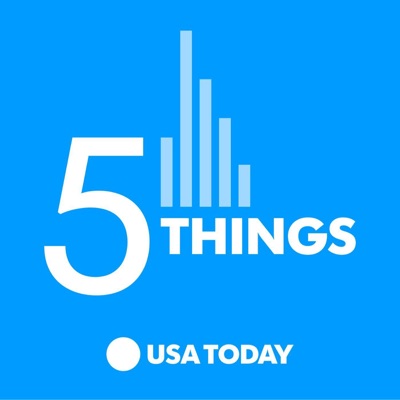 The news you need to know to start your day. Five top news stories and why they matter. Seven days a week, with deep-dive Sunday episodes. Powered by the USA TODAY Network and hosted by Taylor Wilson and Claire Thornton.

Who will replace Rep. Liz Cheney as GOP Conference chair?

Republicans will hold a forum for potential replacements Thursday. Plus, Israel ups its military offensive in Gaza, the Colonial Pipeline restarts operations, children aged 12-15 can now get a COVID-19 vaccine and Tesla stops using Bitcoin as a form of payment.(Audio: Associated Press)

Cheney lashed out at Republican leaders on Tuesday for undermining democracy. Plus, Israel and Hamas attacks increase, the family of Andrew Brown Jr. speaks out after viewing more video of his shooting death, a fuel pipeline will likely restore service by the end of the week after a cyber attack and a new report looks at how much a college degree is actually worth.(Audio: Associated Press)

Tensions have escalated in recent days. Plus, the family of Andrew Brown Jr. will see more footage of his fatal shooting, President Joe Biden brainstorms with governors on how to get more people vaccinated, family members of murdered veterans will speak in court and local governments begin to receive American Rescue Plan payments.(Audio: Associated Press)Episode Transcript linked here.Also available at art19.com/shows/5-Things

A motive is still unclear. Plus, COVID-19 vaccine rates drop in India as the virus surges, calls grow louder inside the GOP for Rep. Liz Cheney to step down from her leadership role, trainer Bob Baffert speaks out after his Kentucky Derby winner tested positve for steroids and a NASA spacecraft loaded with asteroid dust makes its return journey.(Audio: Associated Press)Episode Transcript linked hereAlso available at art19.com/shows/5-things

The crew from The Mothership, USA TODAY’s pop culture podcast, discuss their favorite moms from TV shows and movies. Host Brett Molina reminds us why Winona Ryder’s Joyce Byers in “Stranger Things” is a powerful and insightful mother. And Kelly Lawler celebrates moms like Elastagirl from “The Incredibles.” Guest host Shannon Green from the USA TODAY podcast team tells us how Regina George’s mom from “Means Girls” helped her enjoy maternity leave during the pandemic.You can nerd out with The Mothership podcast every Friday. Listen to the show on Apple Podcasts, Spotify, or Google Podcasts.

Other countries around the world are also trying to deal with case increases amid new variants and low vaccine rates. Plus, Israeli-Palestinian tensions flare, threats against members of Congress are on the rise, part of a Chinese rocket will re-enter Earth's atmosphere and we don't know where and Elon Musk hosts 'Saturday Night Live.'Episode Transcript linked here Also available at art19.com/shows/5-Things.(Audio: WHO)

The VP will discuss migration and other issues. Plus, a 6th grade girl opened fire at an Idaho middle school, a hostage situation at a Minnesota bank ended peacefully, the Biden administration supports efforts to waive intellectual property protections for COVID-19 vaccines and Guy Ritchie and Jason Statham team up again in a new movie.(Audio: Associated Press)

US may be closer to a vaccine tipping point than expected

In the latest excerpt from 'Boots on the Ground,' we hear from Toshira Garraway, who lost her fiancée to alleged police violence more than a decade ago. She continues to fight for justice. Plus, Supreme Court correspondent John Fritze stops by to break down the court's latest oral argument, former President Donald Trump might soon be back on Facebook, the U.S. birth rate falls to its lowest point in more than a century and the Eta Aquarid meteor shower lights up the sky.(Audio: Associated Press)

Today, we play more clips from USA TODAY's new documentary, 'Boots on the Ground.' Plus, the U.S. will restrict travel between the U.S. and India, severe weather continues after an Atlanta tornado, teachers are appreciated after a hard year and May the 4th be with you.(Audio: Associated Press)

Funeral to be held for Andrew Brown Jr. in North Carolina

Sheriff's deputies killed him last month. Plus, tens of thousands of municipal employees return to the office in New York City as reopenings continue, Apple goes to court with the maker of 'Fortnite,' severe weather dips temperatures in the central U.S. and Grand Canyon National Park is looking for hunters to reduce the bison population.Click here for a documentary on Minnesota activism after the death of George Floyd.(Audio: Associated Press)

Talking Tech podcast host Brett Molina joins Claire Thornton to discuss the fractured landscape of streaming. For some users, there's no way to get the content they're after because of disagreements between tech companies like Roku and Google. These situations can remind us that when we stream, we're at the mercy of tech giants like Amazon, Apple and Disney to keep the content we're craving available to users.Follow Talking Tech on Apple Podcasts, Spotify or wherever you listen to your audio.Episode transcript linked here. Also available at art19.com/shows/5-Things.

Nearly half the country's population has received at least one dose. Plus, Israel mourns the victims of a deadly stampede, Reviewed.com's Felicity Warner has some travel tips for going to Europe once it opens up to Americans, USA TODAY Sports' Dan Wolken previews the Kentucky Derby and Mental Health Awareness Month kicks off.(Audio: Associated Press)Episode Transcript linked here

Plus, deputies are named in the fatal shooting of Andrew Brown Jr., the U.S. sends emergency relief to India, the first round of the NFL Draft is in the books and Apple keeps making a lot of money.(Audio: Associated Press, Alison Cutler/The News Leader)

The president also talked about a number of other issues on the horizon, and looked back on his first 100 days. Plus, those charged with murder in Ahmaud Arbery's death face additional hate crime charges, housing and economy reporter Swapna Venugopal explains how companies are trying to lure workers back to the office, the NFL Draft holds its first round and menthol cigarettes might be on the way out in the United States.(Audio: Associated Press)Episode Transcript linked hereAlso available at art19.com/shows/5-Things

The CDC on Tuesday said vaccinated Americans don't need to wear a mask outside, except in crowded settings. Plus, an autopsy shows that police shot Andrew Brown Jr. five times, jobs reporter Paul Davidson explains how job openings are increasing but a surge in applying candidates isn't, President Joe Biden will give his first formal address to Congress and the Supreme Court will hear a critical First Amendment case.(Audio: Associated Press)Episode Transcript linked hereAlso available at art19.com/shows/5-Things

They viewed 20 seconds of body camera footage on Monday. But family members and lawyers want to see the full version, and for it to be released to the public. Plus, politics reporter Chelsey Cox talks about President Joe Biden's first 100 days in office, the U.S. will soon share its AstraZeneca vaccine supply with the world, a judge has dismissed the latest sex abuse lawsuit against Michael Jackson's estate and Apple rolls out privacy changes to iOS.(Audio: Associated Press, HBO)Episode Transcript linked hereAlso available at art19.com/shows/5-Things

Plus, there's new footage of a fatal police shooting in Virginia, the U.S. prepares to send vaccine supplies to India, 'Nomadland' has a big night at the Oscars, the Supreme Court will hear arguments on whether nonprofits should reveal their donors and a 'pink moon' lights up the sky.(Audio: Associated Press)Episode Transcript linked hereAlso available at art19.com/shows/5-Things

What's next for police reform after the guilty Chauvin verdict?

Many people weren't expecting a guilty verdict in the Derek Chauvin trial this week, because there’s almost no precedent of white police officers being convicted for killing Black people in the U.S.Since George Floyd was killed less than a year ago, over 960 people have been killed by police, according to the research group Mapping Police Violence. So, what are we doing to make sure the police stop killing people?Reporters N'dea Yancey Bragg and Grace Hauck explain where reform efforts have failed and where reform measures have been left unenforced in Minneapolis, Chicago, and across the country.Activists who celebrated the guilty Chauvin verdict as a measure of accountability say there's not much else to celebrate right now regarding the future of police reform.Additional reading:What if there isn't a video? For families of people killed by police, it's 'not a fair fight'Columbus police release bodycam footage, identify officer in fatal shooting of Ma'Khia BryantWhite cops have been convicted of killing a Black person before, but it's rareThis Is America: Lessons I learned from covering the Derek Chauvin trialPodcast transcript linked here. Also available at art19.com/shows/5-Things.

I find it very difficult to consider a news item credible when the broadcaster refers to "Mary" as the nephew of the president.