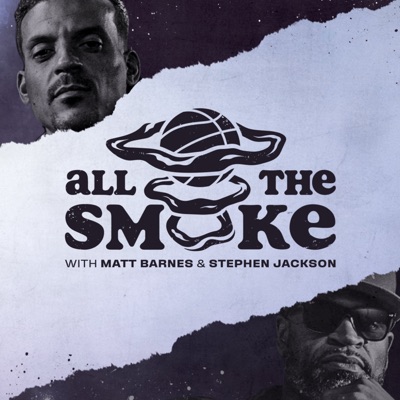 ALL THE SMOKE pairs two of the most outspoken and controversial players of their time. Known as fiery, intense competitors during their on-court careers, Matt Barnes and Stephen Jackson are now two of the most widely respected voices by today’s crop of NBA stars. Serving as mentors to numerous players throughout the league and with their hands firmly on the pulse of the game, they have first-hand insight into the minds, lives and pressing issues facing today’s players. Barnes and Jackson, who have played alongside two generations of All-Stars, will dish on the latest news and drama from on and off the court without boundaries.

The boys are back with another remote edition of All The Smoke. On Episode 25, JR Rider joins Matt and Stephen to talk about his battles with Kobe, playing with Kevin Garnett, and the dunk contest. He also recalls untold stories of MJ.

On episode 24 of All The Smoke, rapper Lil Wayne joins Matt and Stephen remotely to talk about his music career and the impact sports had on it. Lil Wayne also opens up about Kobe Bryant's impact on him and gives us his favorite players in today's NBA.

On Episode 23 of All The Smoke, Matt and Stephen are joined remotely by former NFL star, 'Primetime' himself, Deion Sanders. Sanders talks about Antonio Brown, his NFL career with the Cowboys and 49ers, and his time playing in 2 pro sports (MLB and NFL) in one day.

Matt and Stephen are joined by Thunder point guard Chris Paul in a special remote episode of ALL THE SMOKE. CP3 opens up about being traded to the Thunder, his days with the Lob city Clippers and talks about his bond with Kobe. The boys also dive into the state of the NBA today and Adam Silver’s leadership.

On episode 21 of All The Smoke, NFL Hall of Fame and Super Bowl winning Tight End, Shannon Sharpe joins Matt and Stephen to talk about his football career, his transition to television, and what it's like working with Skip Bayless. They also dive into Lebron's greatness and Tony Romo's new CBS contract.

Celtics legend Paul Pierce joins Matt and Stephen on episode 20 of All The Smoke to talk about his beef with Dwyane Wade, Kobe’s impact on his game, and being a part of the first Big 3 in Boston. He also opens up about being stabbed in 2000.

On episode 19 of All The Smoke, music legend Snoop Dogg joins the boys to talk about his favorite Lakers moments of all-time, Nipsey's legacy, and Ja Morant. He also reveals how he got his start in the music industry.

On Episode 18 of All The Smoke, Al Harrington joins the boys to talk marijuana industry, his path to the NBA from high school, the 'We Believe' Golden State Warriors and shares some personal Stak and Matt stories.

Staff writer for The ATLANTIC and former ESPN talent, Jemele Hill, joins Matt and Stephen on Epsiode 17 of All The Smoke to talk about her time at ESPN, Colin Kaepernick, her current role at The ATLANTIC, and how social media has changed the game of journalism.

Kevin Garnett joins Matt and Stephen live from NBA All-Star weekend in Chicago for Episode 15 of All The Smoke. The Big Ticket talks about the Celtics-Lakers rivalry, being inducted into the Hall of Fame, and shares some stories about playing against MJ.

Kevin Durant joins Matt and Stephen on Episode 14 of All The Smoke to discuss his time with the Warriors, joining forces with Kyrie on the Brooklyn Nets and his Twitter beef with former teammate Kendrick Perkins. Recorded on January 22, 2020 Subscribe to the SHOWTIME Basketball YouTube Channel: https://bit.ly/2OLkr50 Follow ALL THE SMOKE: Instagram: https://www.instagram.com/allthesmoke/

Steph Curry joins All The Smoke and takes us from the 160 pounder at Davidson to earning playing time early in his career, the work he puts in and the secret of his success.  Steph reflects on his early years at Golden State from the impact that Monta Ellis had on his career to Klay and Draymond joining and forming the nucleus of a championship team.

Cari Champion joined All The Smoke to talk about her life from growing up in Pasadena to majoring in English at UCLA to starting a career in journalism that led to The Tennis Channel and First Take on ESPN, part of a 7 year run including SportsCenter and SportsNation.  Cari shares the secret of her success that helped Matt in his career as well!

All The Smoke welcomes The Black Mamba to the show!  Kobe and Stack reminisce about the 1996 McDonald's All-American Boys Game.  Stack says he should have won the MVP, does Kobe agree?  Kobe talks about the team that stopped the Lakers from winning even more championships, Matt getting feisty with Kobe, lack of playing time in his first three years and his break during the NBA lockout that lead to the beginning of one of the greatest careers in American sports.

E10: ALL THE SMOKE ALL-DECADE TEAM!

2010'S...THAT'S A WRAP!  We were so excited to get All The Smoke off the ground and thank you to everyone for listening, subscribing and loving our show!  What an amazing decade of basketball and it was a challenge, but we were able to select OUR ALL-DECADE TEAM!  Enjoy and we will see you in 2020 with some great guests!   SHOWTIMEBasketball #AllTheSmoke #DwyaneWade Subscribe to the SHOWTIME Basketball YouTube Channel: https://bit.ly/2OLkr50 Follow ALL THE SMOKE: Instagram: https://www.instagram.com/allthesmoke/

ALL THE SMOKE NBA CHRISTMAS PREVIEW!

Matt and Stack are feeling festive so they acquire a Christmas Tree to get into the spirit before breaking down The Celtics vs Raptors, Bucks vs Sixers, Rockets vs Warriors, Clippers vs Lakers and finally Pelicans vs Nuggets.  All The Smoke gets you ready for a great day and night of Christmas basketball!   Merry Christmas and Happy Holidays from All The Smoke!

D-WADE IN THE HOUSE!  Dwyane Wade comes to All The Smoke to talk about life after basketball.  D-Wade is not just sitting around!  He's working on content, he's focused on his family and his children and helping the next generation navigate the NBA and life in the spotlight.  Come be a fly on the wall as Matt, Stack and D-Wade talk about basketball and maybe a few life lessons along the way. Subscribe to the SHOWTIME Basketball YouTube Channel: https://bit.ly/2OLkr50 Follow ALL THE SMOKE: Instagram: https://www.instagram.com/allthesmoke/ Follow SHOWTIME Sports: YouTube: https://www.youtube.com/user/shosports FaceBook: https://www.facebook.com/ShoSports/  Twitter: https://twitter.com/SHOsports

E8: STEPHEN A. SMITH JOINS ALL THE SMOKE

You know who Stephen A. is, but do you REALLY know Stephen A.?  Matt and Stack go way back with Stephen A. and they dig in and learn about Stephen's story and rise up the ranks.  Stephen A. tells All The Smoke who he was closest with in the league, stories that he killed to protect a player, Colin Kaepernick, beef with A.I. and his approach to his job and the repurcussions that come along with it.  Sit back and enjoy a great conversation between these three legends!

E7: MATT AND STACK ON TALKIN' SMACK AND THEIR NBA EXPERIENCE

Matt and Stack talk about dealing with Kobe Bryant and his trash talk and the mental part of his game.  Stack reflects on the 2003 Spurs team that knocked off the Lakers and ended their attempt at a 4th consecutive title.  Matt talks about the high expectation of The Clippers Lob City team and how they fell short against The Rockets which led to the beginning of the Warriors run.  Segue into the current Clippers and the job Doc Rivers is doing and the opportunity they have.  Stack talks about returning to The Spurs and the tough loss to OKC.
See More
Comments (23)

Great interview. This show is dope

All the Smoke is easily Top 5 podcasts out today! Gotta love the Realness of Matt Barnes and Stephen Jackson man 🔥🔥🔥🙌🏽🙌🏽

This is 🔥🔥🔥🔥 Keep up the great work guys

Its not working , not any episode here ... make it right

This is so awesome!!

Yall podcast the truth keep up the good work please

S1E3 with Shaun King is an enlightening episode. Keep up the good work.