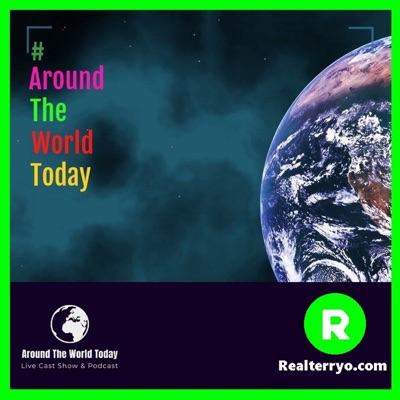 Around the World Today

Around the World to day is a Podcast by Real Terryo hosted by Terry Davies that looks at News & Politics from all over the world and picking out a underline topic to talk about each episode.
55 Episodes
Reverse 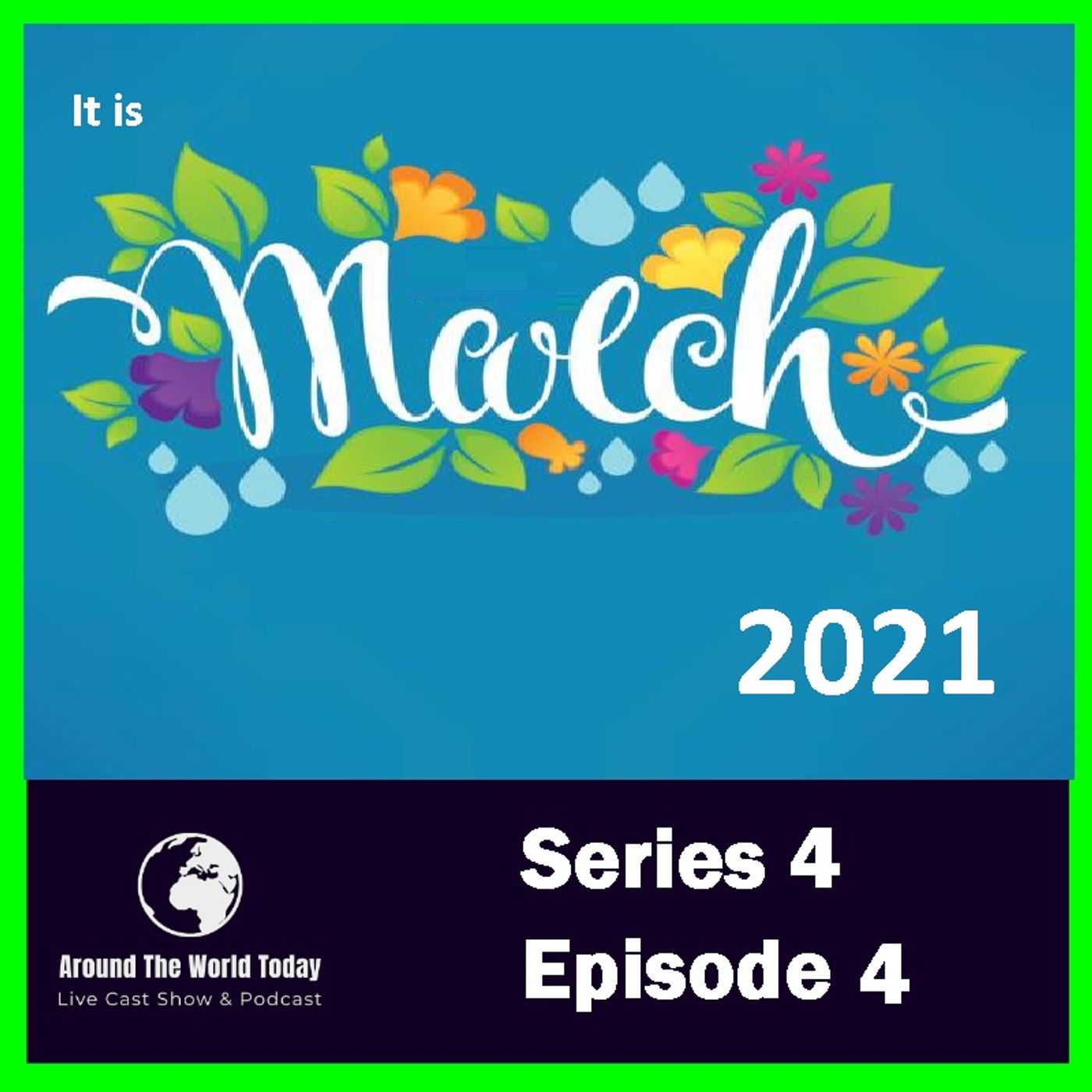 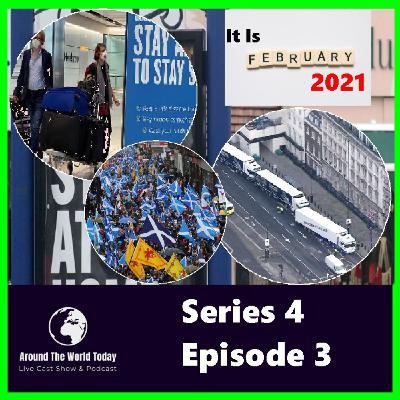 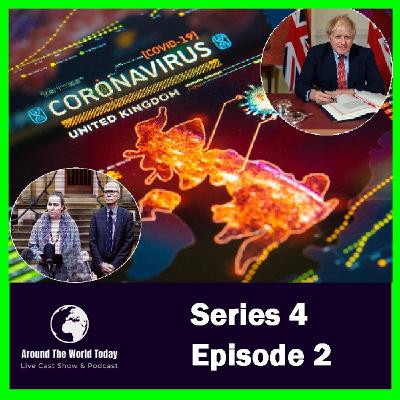 COVID-19: It's been a year since cases were reported in the UKTerry D Talks about COVID-19 and It's been a year since cases were reported in the UK. It was a Wednesday afternoon when a 23-year-old Chinese national called the NHS 111 phone line from his hotel room in York city centre. The University of York student, known in medical journals only as "B", was suffering with a fever, a dry cough and muscle pain. His 50-year-old mother, "A" - who had flown to the UK from Wuhan, in Hubei province, a week earlier - was also feeling unwell with a fever, cough and sore throat.When she arrived in the UK, coronavirus had spread from the Chinese province to countries including Thailand and the US, with some 500 confirmed cases and 17 dead. On 23 January - the day patient A landed in the UK with the student's father - Wuhan and its population of 11 million people, became the first in the world to enter coronavirus lockdown.SUBSCRIBE to our YouTube channel for more videos: https://zurl.co/rHuu​Follow us on Twitter: https://twitter.com/RealTerryo​Like us on Facebook: https://www.facebook.com/RealTerryo​Follow us on Instagram: https://www.instagram.com/RealTerryo​For more content go to http://realterryo.com 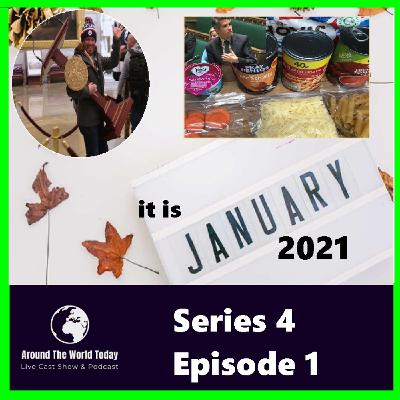 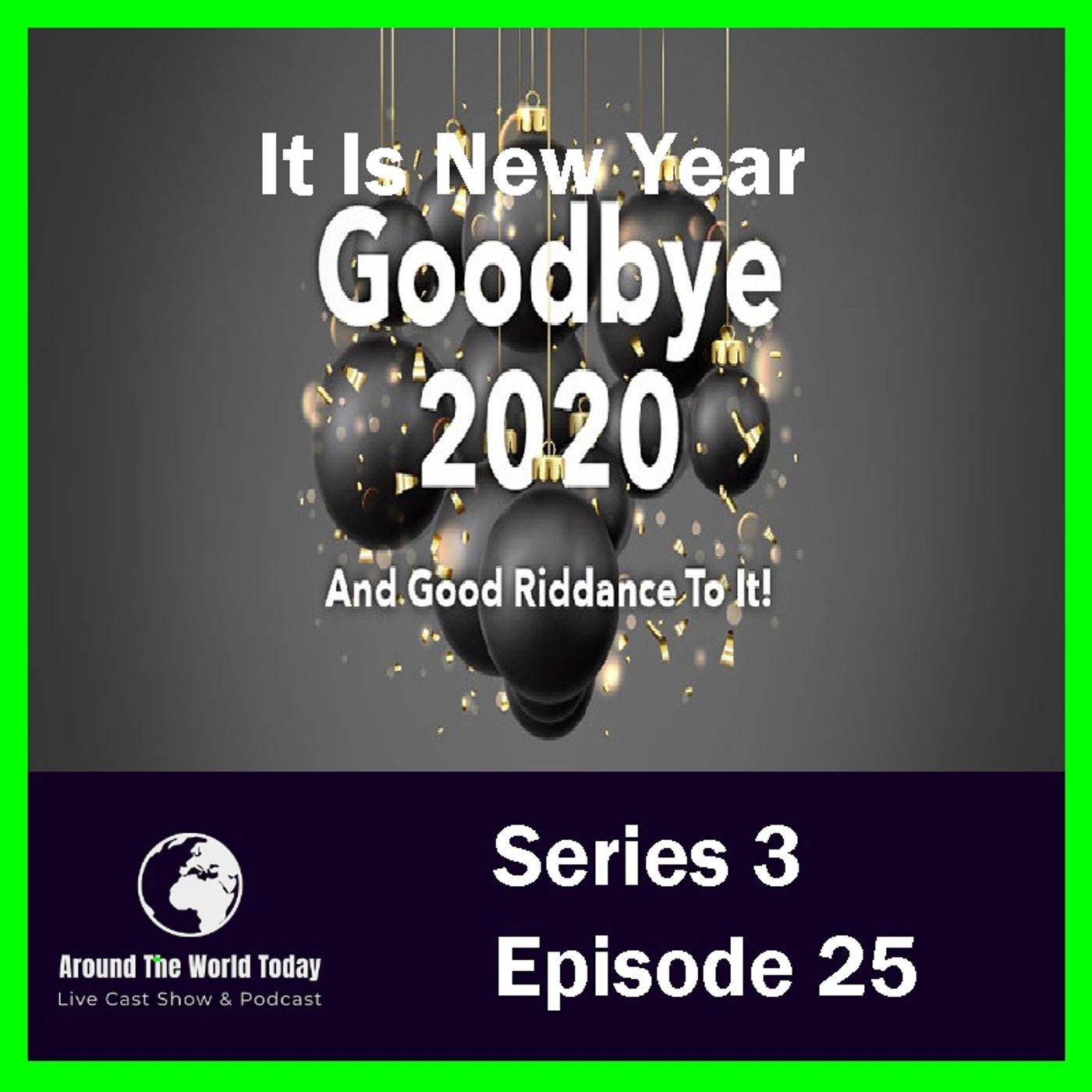 Terry Talks about the last Year is the current year, and is a leap year starting on Wednesday of the Gregorian calendar, the 2020th year of the Common Era (CE) and Anno Domini (AD) designations, the 20th year of the 3rd millennium, the 20th year of the 21st century, and the 1st year of the 2020s decade. 2020 was heavily defined by the COVID-19 pandemic, which has led to global social and economic disruption, mass cancellations and postponements of events, worldwide lockdowns and the largest economic recession since the Great Depression of the 1930s2020 was declared the "International Year of Plant Health" by the United Nations[4] and "Year of the Nurse and Midwife" by the World Health OrganizationSUBSCRIBE to our YouTube channel for more videos: https://zurl.co/rHuu Follow us on Twitter: https://twitter.com/RealTerryo Like us on Facebook: https://www.facebook.com/RealTerryo Follow us on Instagram: https://www.instagram.com/RealTerryo For more content go to http://realterryo.com 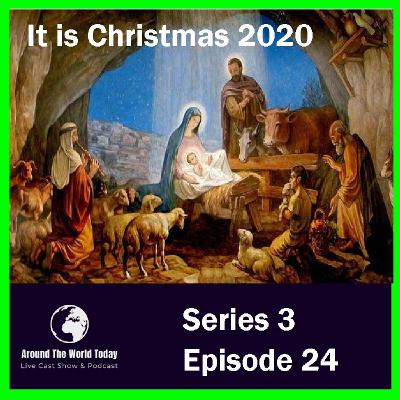 SO Who would of Thought Christmas pudding and Turkey would be on the Menu a few months ago and that so there was a lot of talk with in the media that Christmas this year the year of the Plague as a Friend said a few months ago on a zoom call. But for me as a Christian and a person who’s country and heritage celibates Christmas how can it be cancelled when you know to do that we will need to be Doctor Who and take the Tardis Back to that Little town of Little Town Of Bethlehem and to that staple. 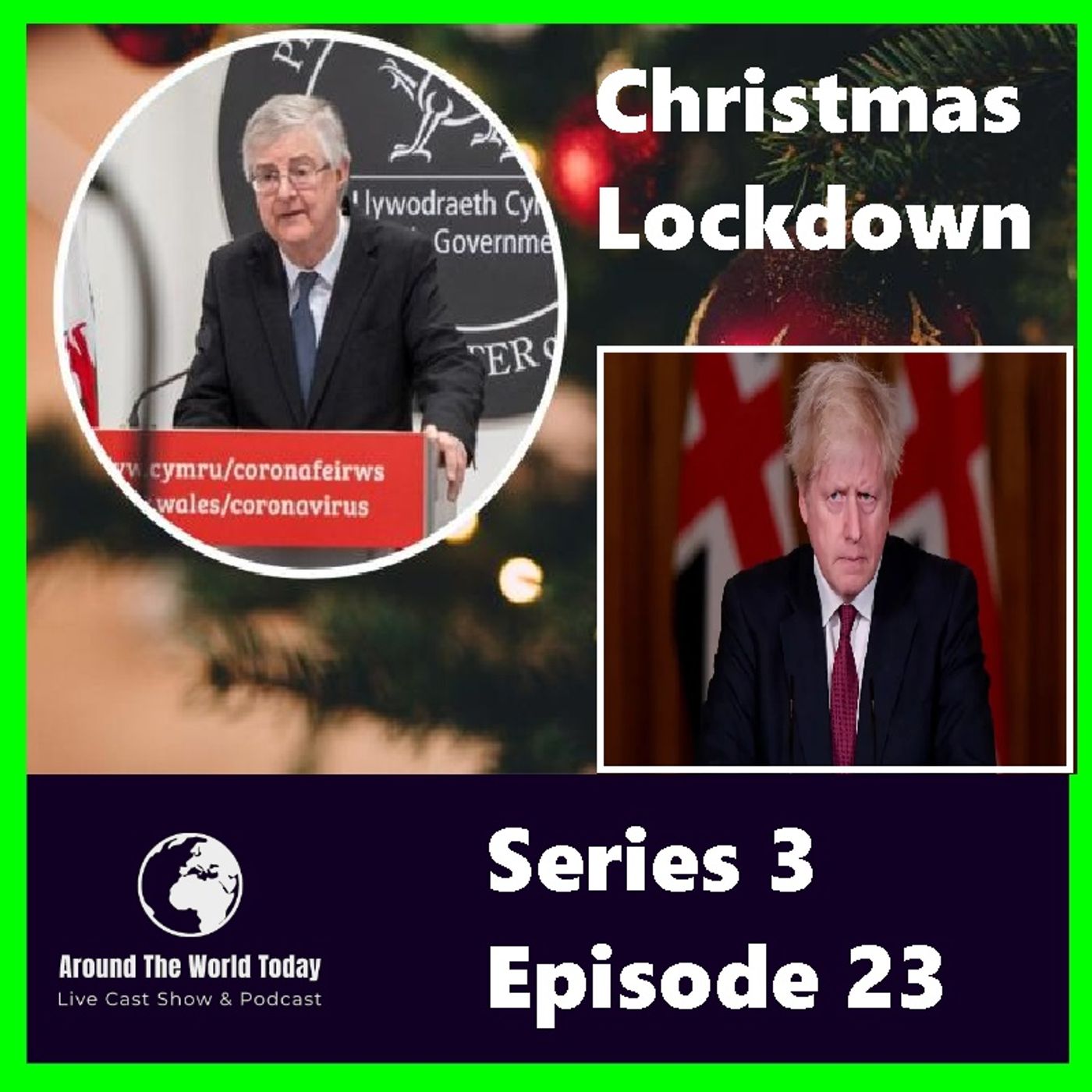 Around the World Today Series 3 Episode 23 - It Is a Covid Christmas 2020 Terry Talks about The rapid spread of a new variant of coronavirus has been blamed for the introduction of strict tier four mixing rules for millions of people, harsher restrictions on mixing at Christmas in England, Scotland and Wales, and other countries placing the UK on a travel ban and Few people had heard of Chris Whitty or Jonathan Van-Tam at the beginning of 2020. Now, months on from their Downing Street press conference debuts, England's chief medical officer Prof Whitty and his deputy Prof Van-Tam are proving a hit with shoppers. while Trying to enforce lockdown laws over Christmas could put police at risk of harm and in "difficult" situations, the Welsh Police Federation has warned. 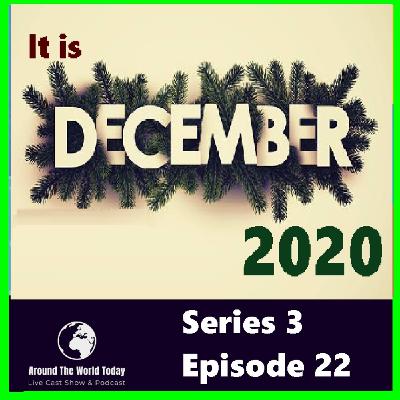 Terry Talks about Members of the US electoral college have affirmed Joe Biden's presidential election victory, one of the final steps required for him to take office. The Democrat won November's contest with 306 electoral college votes to Republican Donald Trump's 232. Under the US system, voters actually cast their ballots for "electors", who in turn, formally vote for candidates weeks after the election. Despite this process, President Trump is not expected to accept the result and Brexit trade deal possible within days after Johnson concession, says EU. Terry then Talks about the how Hate seamed to Win but Love has won. Terry Also Would like to Dedicate the Song The Clash - I Fought the Law To President Donald J Trump 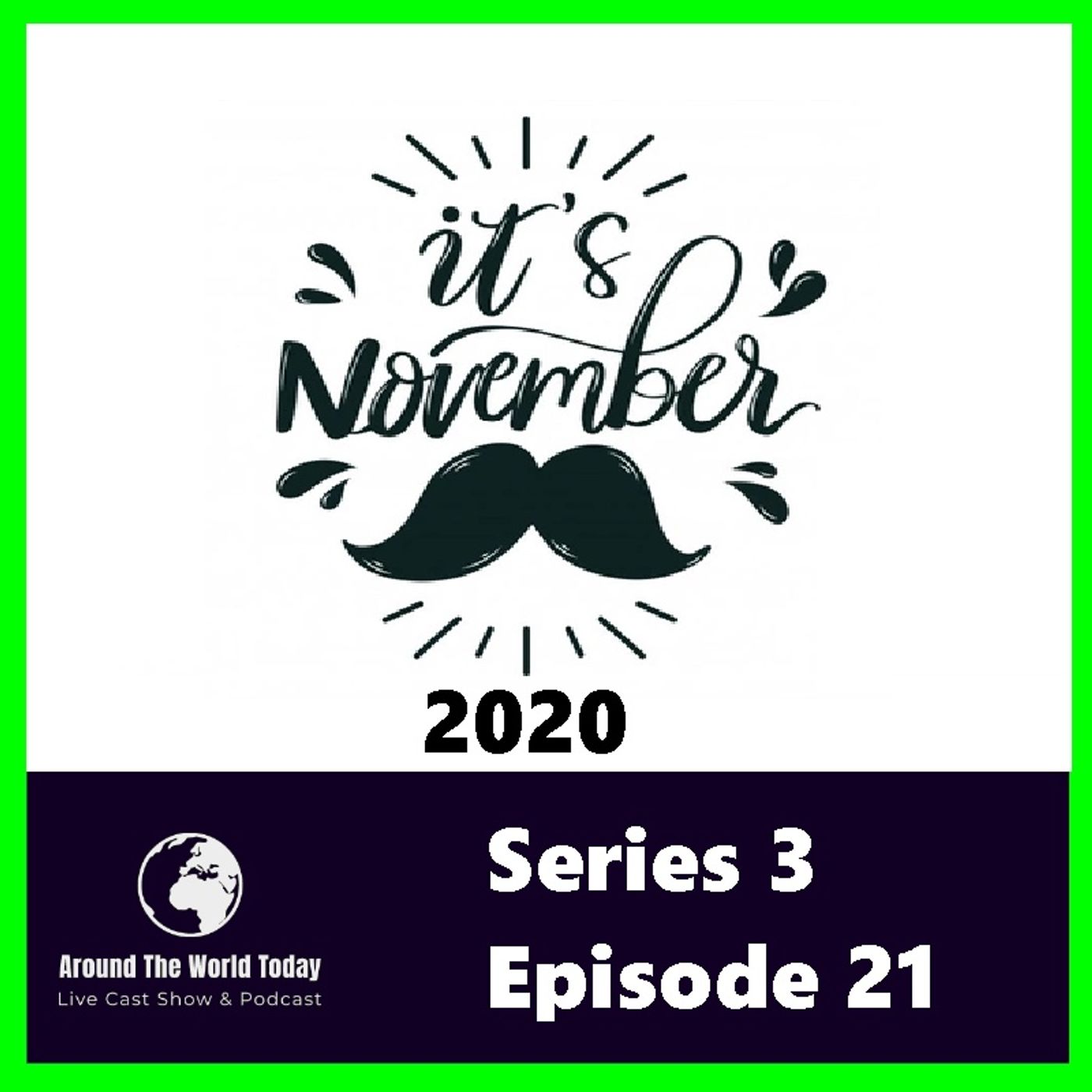 Around the World Today Series 3 Episode 21 - It Is November 2020 Terry D Talks about some of the story's that have been going on in the last few days with in the Media. Terry Has some advise For Mr Cummins as Sir Humphrey in Yes Minister Or Yes Prime Minister would say you should put a statement out expressing Solidarity in unemployed as you just joined them and pop along to the Job centre on the Horseferry road. 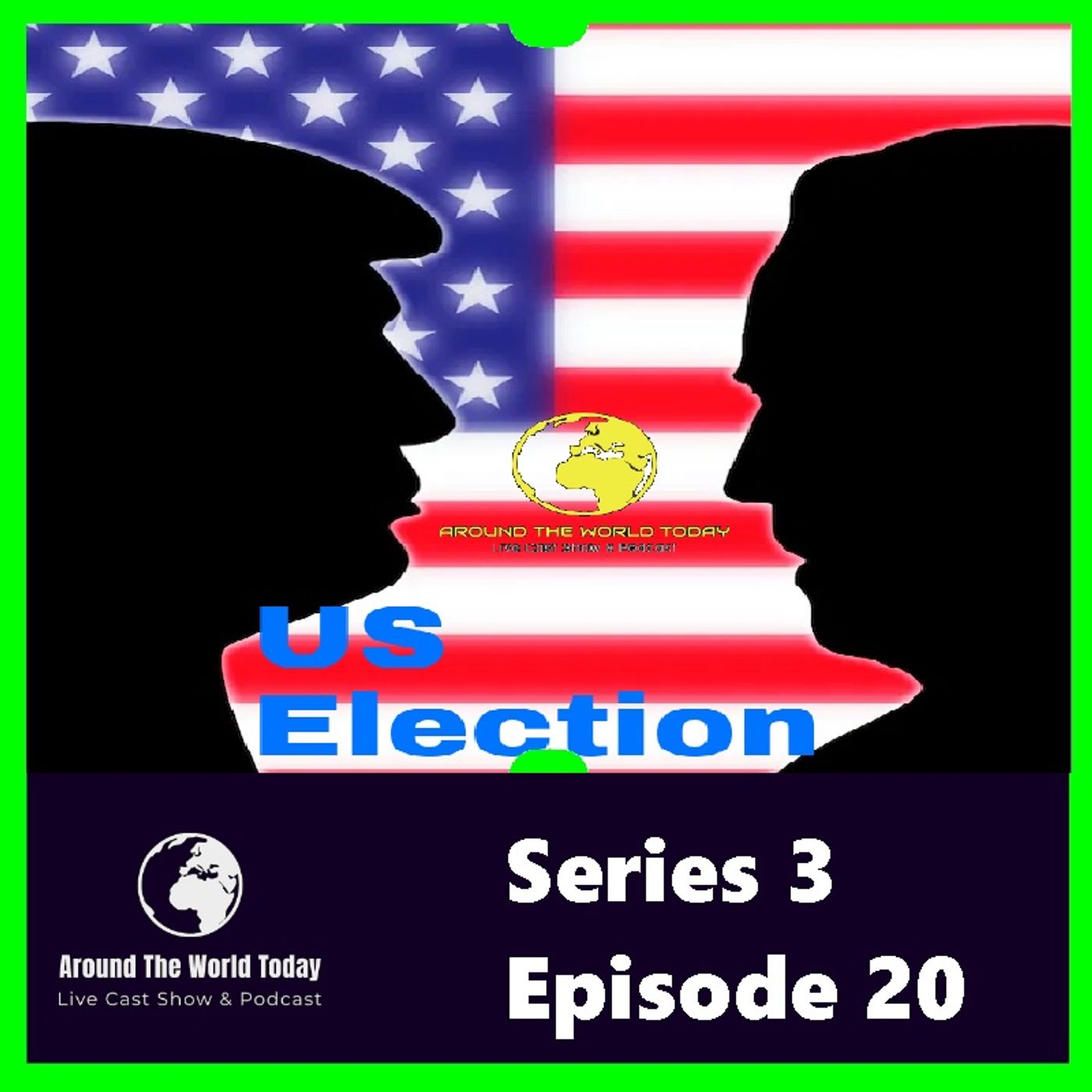 Around the World Today Series 3 Episode 20 - The US Election

The United States is about to have a New President after the Election has been called for President Elect Joe Biden. Terry Talks about Hate and a rants about trump. 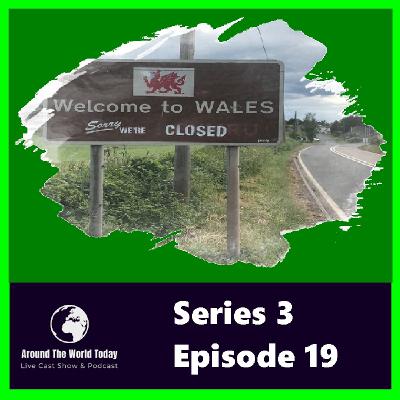 Terry Talks about The new Rules for wales. So basically in English law it states that you shouldn’t travel outside of it a tear 3 area so all the first minister is doing is putting it into Welsh law so if someone from England is caught in Wales and has come out of a hotspot area they will be fined just like they would if they are stoped in England. So who are the ones being divisive here the Welsh government for backing up the UK government law in their pandemic regulations or the Conservative party and plaid, media making it a union v Nationalist or welsh v English fight. 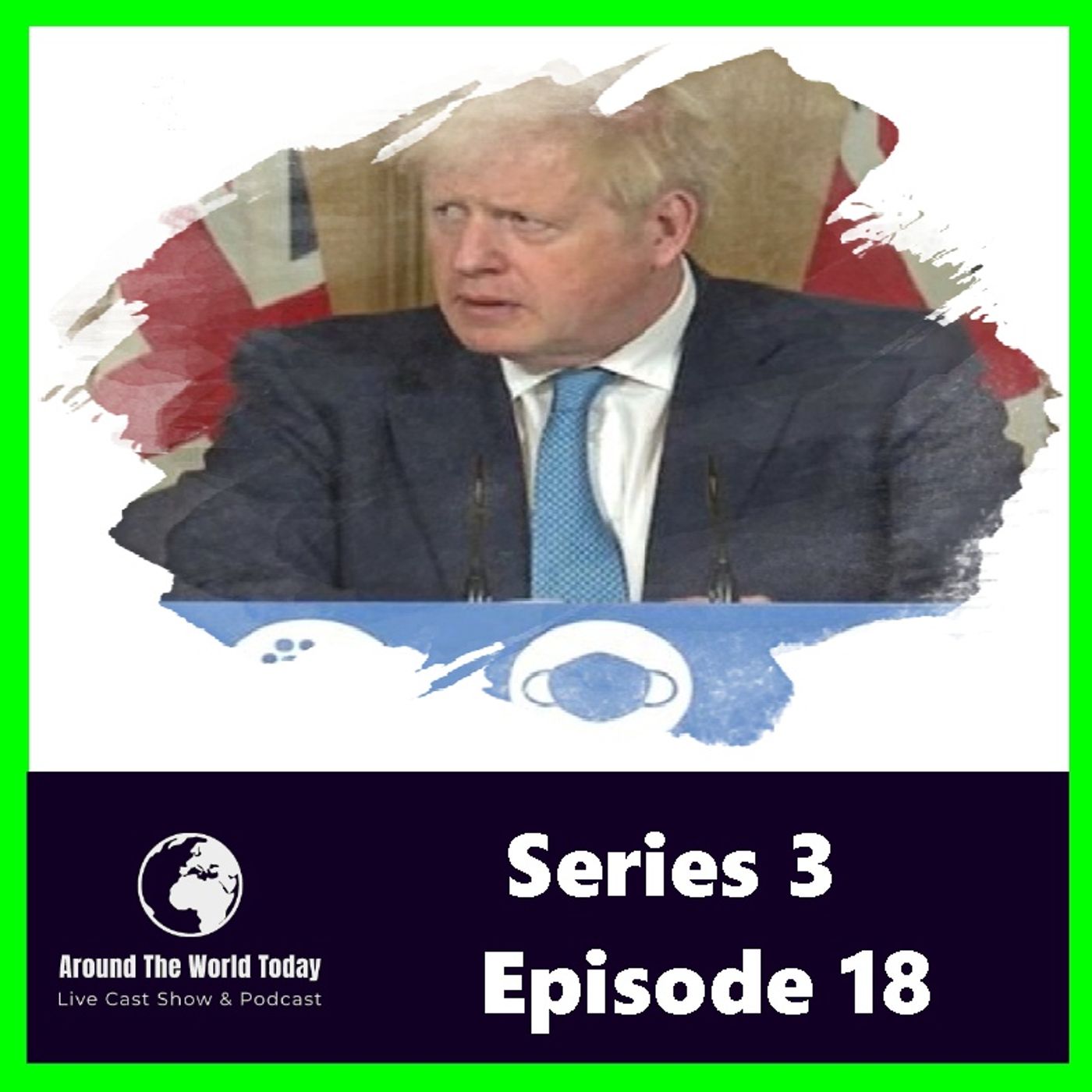 Around the world today series 3 episode 18 - Oven Ready Deal Brexit and Covid and the WelshTerry Talks about what has been going on to day with the UK/EU Trade deal and even Covid and a bit of Welsh independence. 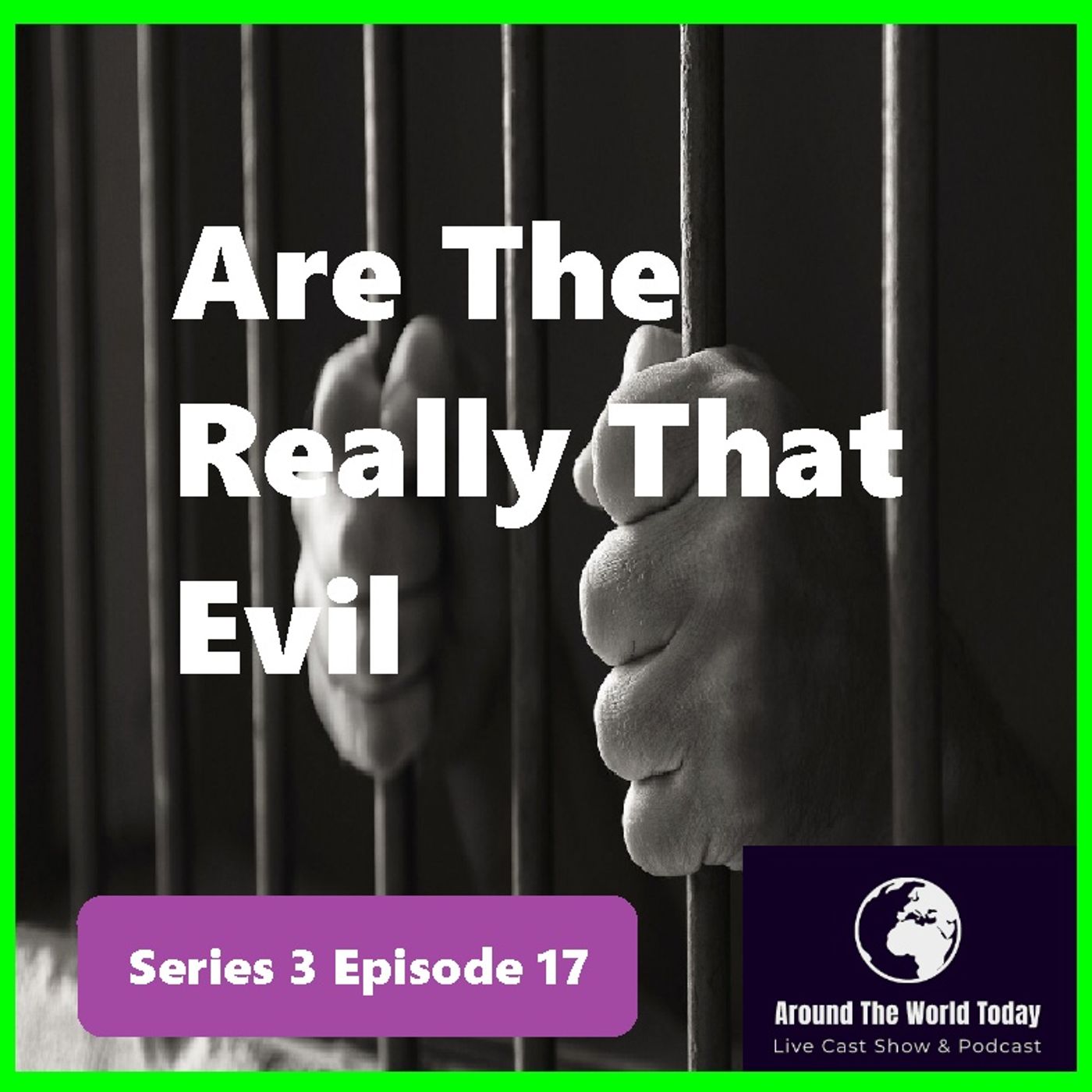 Terry Talks about Prison how Lots of people in prison have made mistakes, and a lot have massive awareness of this. Not excusing the impact of their crimes, but how easy is it for most people to end up in a place like this, save for one or two things here and there?Are people really evil? Or are they examples of people that have fallen through the cracks and been failed by society and the system? 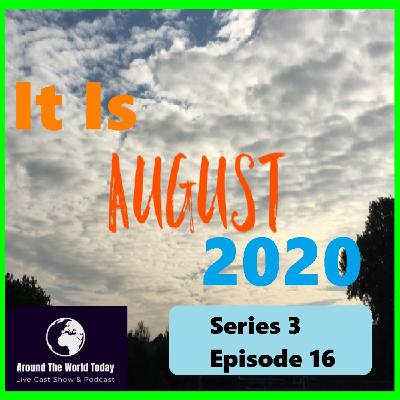 Around the world today series 3 episode 16 - Its August 2020. Terry Talks about the what he has been up to in the last month 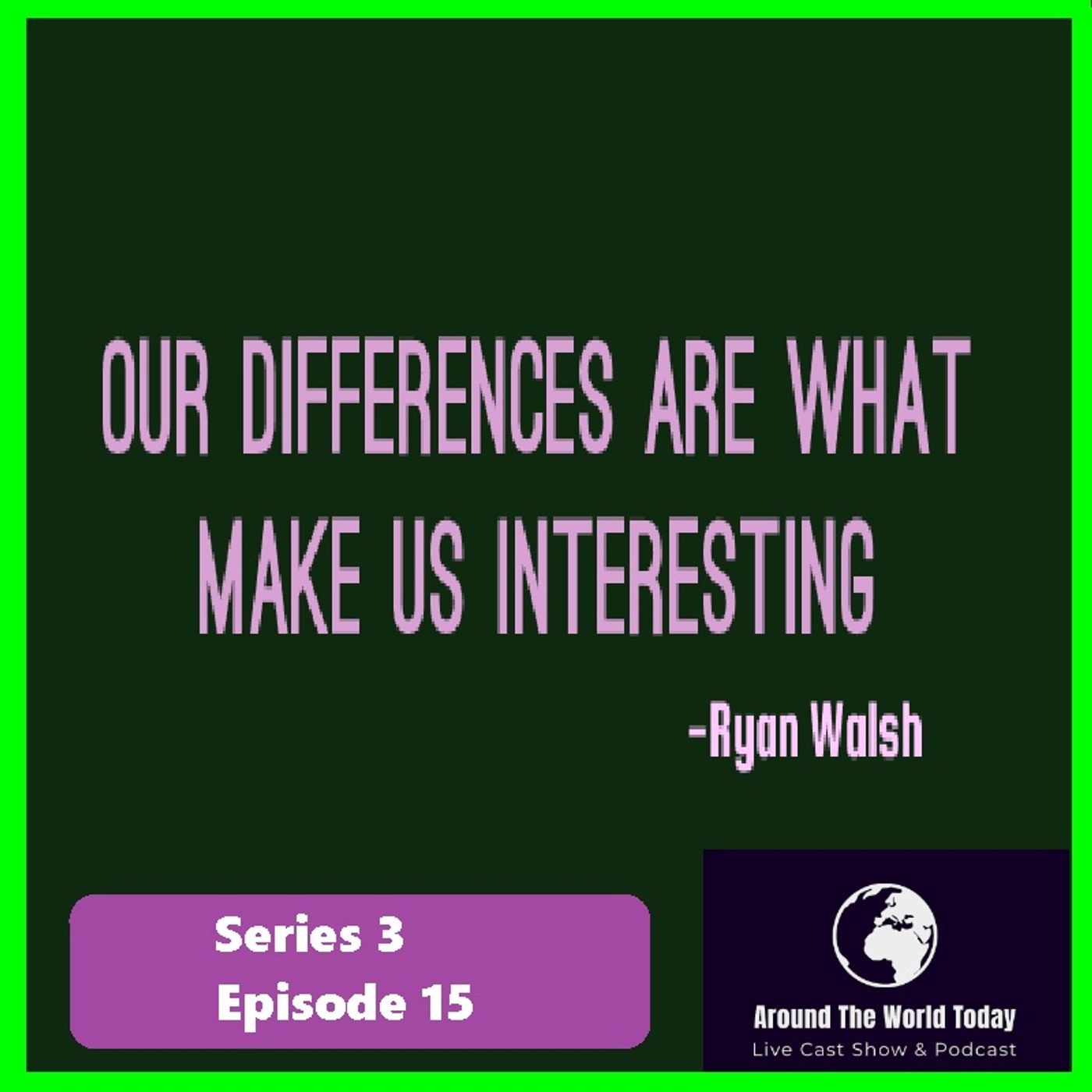 So you have a Book and a Film telling the same story or plot and before you watch the film you read the book and you form your own judgments then you sit down and start to watch a Film or Mini Series Like I said I was talking about the Bible and the mini series mini Series is that 1977 Tv Mini Series Jesus of Nazareth but then It got me thinking to others things so what some would say the more practical things so how people can see the exact same thing it 2 different forms of communication so taking this in to account look at big media you can be given a story in the media so the company Reach Plc they own the Daily Mirror and the Daily Express now these 2 news papers have totally different type of readers but the same news. Just told in a different way. 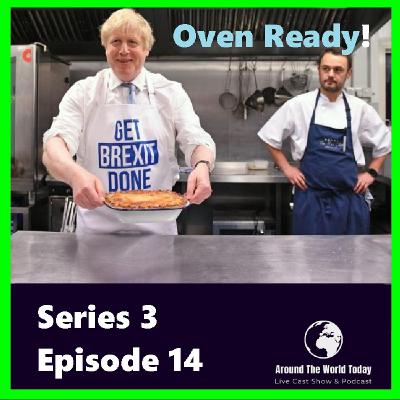 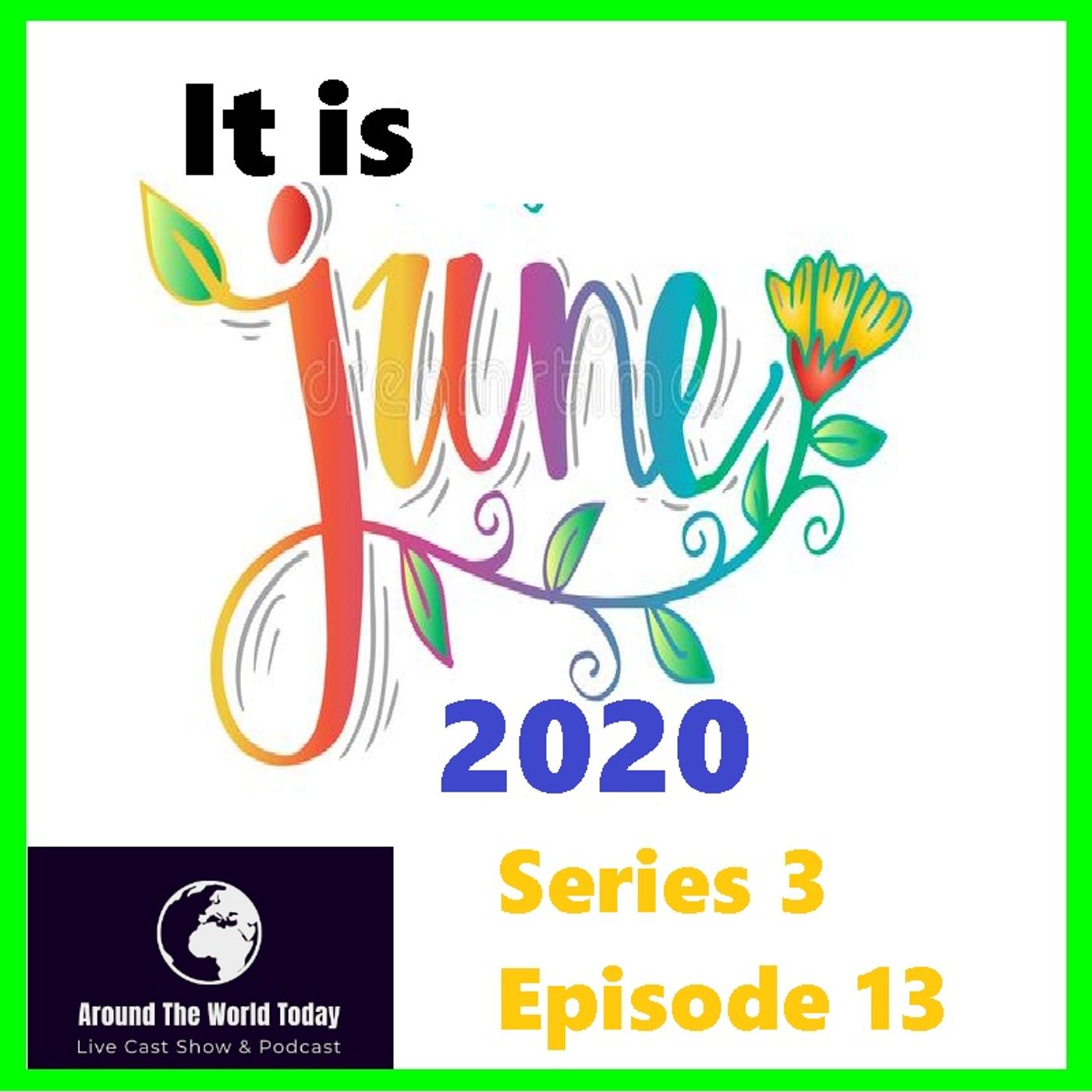 Terry rounds off some of the nxews in the last month. 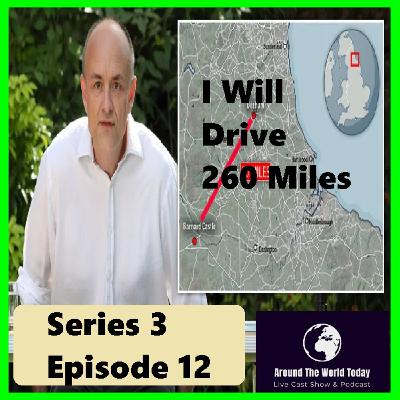 With in the United kingdom over the last few days there has been one story that has dominated the news cycles of all media outlets that has lead to death threats of religious leaders and even politicians and a government Staff member (Appointed by the PM as a Political Adviser) not a government minister (Elected Official) has to give a statement of his actions. So what am I talking about well Prime Minister Boris Johnsons Chief Adviser Dominic cummings on the and Braking the lockdown Rules now some are saying this is about left or Right or even Brexit and Remain but its not about that what it is really about is Right from Wrong was British people are asking was the lockdown one rule for us and then another rule for them or were we taken for fools. 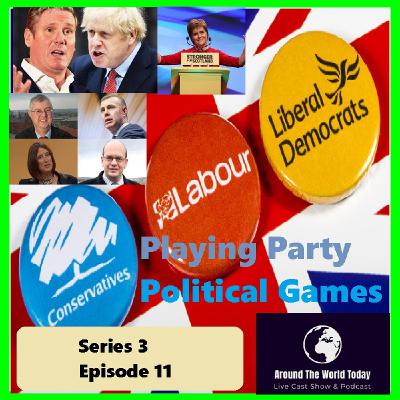 So over the last few weeks I have found myself being even more angry at the political games being played over the plague that we know as Coronavirus or Covid 19. In the United kingdom with Devolution what is effectively federalisation in all but name if you are seeing this from out side the United Kingdom. We have a Government in Westminster and than 4 Home Countries and then 4 Crown Dependencies and 14 other British Overseas Territories (BOTs) or United Kingdom Overseas Territories (UKOTs), what we have is that when the United Kingdom Government acts in a matter it also speaks for all 21 nations but they only really run England. 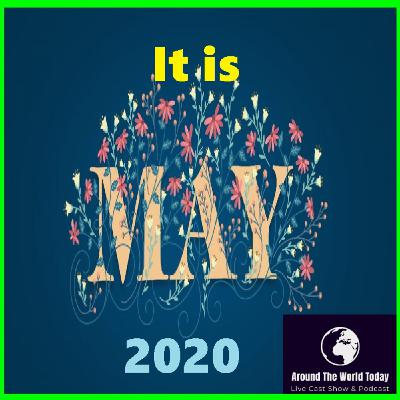 Series 3 Episode 10 - it is May 2020 Terry offers a refledction of the last month and how the lockdown has changed the world asd we kknew it .
See More
Comments