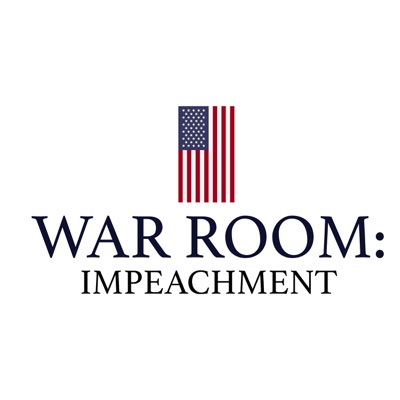 © Copyright Citizens of the American Republic 2020 All rights reserved. 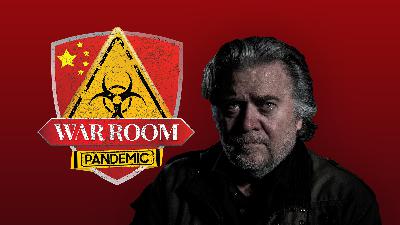 Steve Bannon and Jack Maxey discuss the steps U.S. government is taking and what steps local communities should take as the outbreak reaches America's shore and the markets take a nosedive. 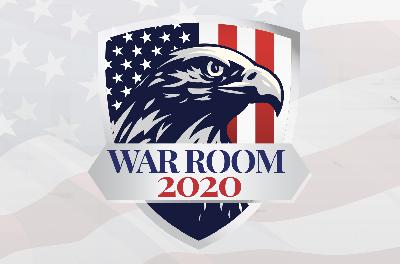 Jason Miller and Raheem Kassam are joined by European-American populist activist Matthew Tyrmand to discuss the latest on the market reactions to the coronavirus outbreak and Biden's chances of staying alive past the South Carolina primaries.

Steve Bannon and Jack Maxey are joined in studio by Jason Miller, Rosemary Gibson, and Maura Moynihan discuss the politicization of the pandemic and how we would fare with China controlling the global supply of Active Pharmaceutical Ingredients.

Steve Bannon and Jack Maxey are joined by Jason Miller to discuss the impact of an outbreak in America. Calling in is Maria Luisa Rossi Hawkins to provide updates from Italy as well as Dr. Michael Yon calling from Bangkok to provide granular perspective on the coronavirus in Asia.

Ep 13: South Carolina on the Horizon

Steve Bannon, Jason Miller, and Raheem Kassam discuss the Democrat primaries, the focus of the candidates on South Carolina and what the picture going in to the nominating convention may look like.

Steve Bannon sits down with Curtis Ellis of America First Policies PAC to discuss the supply chain impacts of the coronavirus and how it will affect the American economy.

Special Ep 23- War Room: Pandemic, Microeconomics of the Virus and the Italian Shutdown

Steve Bannon and Jack Maxey are joined in studio by Curtis Ellis to discuss the shutdown of Italy. Calling in is Maria Luisa Rossi Hawkins to highlight the situation on the ground in Italy. Also calling in is Christopher Balding to discuss the microeconomics of China and the virus.

Ep 12: Bernie has the Democrats on Their Back Foot(w/Sheriff David Clarke)

Steve Bannon, Jason Miller, and Raheem Kassam are joined in-studio by Sheriff David Clarke to discuss the momentous victory by Bernie Sanders in the Nevada caucuses and how this will impact the remaining field as we march closer to the DNC Nominating Convention.

Steve Bannon and Jack Maxey are joined in-studio by Bill Gertz with Miles Guo calling in to discuss the extent of the outbreak of the coronavirus from an international perspective.

Steve Bannon, Jason Miller, and Raheem Kassam discuss if Mike Bloomberg has a shot of making a comeback in the Democrat's Presidential Primary after his disastrous debate appearance in Las Vegas. 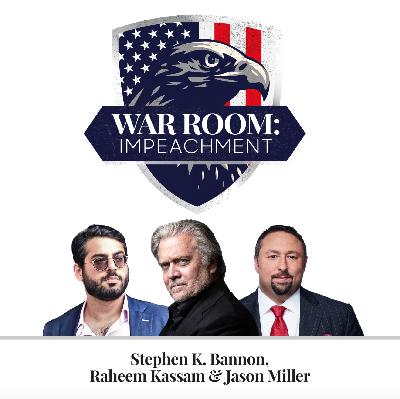 Bloomberg is up in polls across the board, but is it enough to catch Bernie Sanders? And what ever happened to Joe Biden?Raheem Kassam, Jason Miller, and Greg Manz discuss what a good debate looks like for all of the candidates, as well as discussing Trump's pardons and the alleged friction between AG Barr and the President.

Steve Bannon and Jack Maxey are joined in studio by Dave Ramaswamy, Jay Kansara, and Dr. Steven Hatfill to discuss how India can play a pivotal role in saving the world from the coronavirus ahead of President Donald Trump's visit to India next week.

Ep 8: On the Box or In It? Will Bloomberg Take the Debate Stage?

Mayor Michael Bloomberg has officially qualified to take the debate stage tomorrow ahead of the Nevada caucuses. But will he step up, or continue to hide behind millions of dollars of advertisements?Steve Bannon, Jason Miller, and Raheem Kassam discuss.

Steve Bannon and Jack Maxey are joined by callers Christopher Balding and Mark Simon to discuss China's microeconomics and what the situation on the ground in China actually is.

Ep 7: Bloomberg and The Beast

Michael Bloomberg is outspending (and now outraising in EARNED media) his fellow Democrats primary contenders. So is Hillary Clinton going to be his Vice President pick? And can he REALLY win a meme war against Bernie?Steve Bannon, Jason Miller, and Raheem Kassam discuss.Oh, and the New York Times meltdown over President Trump's appearance at the Daytona 500.

Steve Bannon, Jack Maxey and Dr. Steven Hatfill discuss the validity of China's reporting on the coronavirus outbreak. Calling in is Senator Tom Cotton who also questions China's relationship with the facts.

Steve Bannon and Jack Maxey are joined in studio by Dave Ramaswamy and Dr. Xiaxou "Sean" Lin to discuss the influx of infections in China and how India may be a strategic ally in building a "bio-wall" to stop the spread of the coronavirus pandemic.
See More
Comments (40)

I just copied this podcast on SA news 24 and this was a woman from SA's reply Verita, STOP spreading rumors. I live in Beijing, and it is NOT on lockdown. Where does it bring you in life by spreading false information...Janet Lambrecht Haasbroek.

stop talking about stupid coronavirus on the impeachment show

It is just a few seconds until midnight.

I don't agree with Jason Miller and your first speaker on Star. He gave a lesson how the House should have worked. Basically he said Pelosi could not sign the Impeachment documents. She did not have the authority. It's like you guys are dismissing this important issue.

Listening to Star. Did he hint that Pres Trump is looking at a lawsuit against those who falsely accused him?

I think it is interesting to see how rhetoric from CNN and the left leaning media is resonating well with Communists leaning organisations. In South Africa theybare Protests against Trump because of false narratives from CNN https://ewn.co.za/2020/01/23/cosatu-hits-out-at-war-obsessed-trump-for-always-smelling-blood

Thank you all for this unformative podcast. A running commentary would be amazing while the trail is on.

Just a question maybe it's Ridiculous. Is it not possible that Nancy Pelosi wants to be President? Is this not her personal agenda in harassing Trump? She knows she hasn't got the votes so this is her very.

Steve Bannon it was so frustrating today you ask hundreds of questions but don't let them answer it properly. Please give them time to answer.

Exhibit 69 illustrating this late-Breznev style propaganda operation. Executive summary: whenever you hear Steve Bannon and his bunch of 'wingmen' laugh, just realize they're laughing at you. In this episode they continue to build the Potemkin village for Trump. He's sure delivered on his every promise so far. No, it's not a personality cult, right? They also keep using the word 'granularity' in every possible context, except for one: they simply can't see the elephant in the room - Trump asking Zelensky for a favor with witnesses having direct knowledge of the process confirming the fact. And nobody ever connecting Trump with having any qualms about corruption in Ukraine, or anywhere else for that matter. And yes, to 'prove' the opposite, they would dig some document in somewhere in the belly of the US administration that, whenever it suits them, they call the deep state. They just believe you'd be dumb enough to believe that. And they are worried about FISA, but they are never worried by the sitting president asking a foreign power to help him dig up some dirt against an American citizen, but also his political opponent. And, yes, they want you believe that Flynn was a hero. What to expect when McCain couldn't be a hero and Vindman can't be a hero either. Apparently, you have the heroes you deserve. Unfortunately, Kassam's prediction about the result of the British election at the end of the show didn't materialize. So he won't make up for taking part in the mendacious Brexit campaign that he helped orchestrate.

you need to muzzle bannon jeezus

And the saddest moment of the episode was when Bannon got at the Bidens for 'exporting American crony capitalism'. Given the fact that he served the Trumps, buddies of the sheikhs and Parnases of the world, that gives a new quality to hypocrisy. And the reason why it was saddest rather than second funniest is that he's not the classic example of right wing/populist media/politics personality when you wonder 'are they so dumb or they think their audience is dumb? Or both?' - he's not stupid, but he believes you are. And when you hear him laugh, just be sure he's laughing at you.

The funniest moment of this episode was when Bannon claimed that Trump only wants a fair trial now and he's willing to appear before the House/Senate. Yes, it's like with revealing his taxes. He's willing and Bannon believes that. Ha, ha. But Bannon is having good fun spreading his spin. He genuinely enjoys messing with people's heads. An interesting case for psychoanalysts...

Having nothing to say about the essence of Hill's testimony Kassam goes after her personally, making a fool of himself in the process. First, he quotes her 2017 text comparing Trump's revolution to the Bolshevik one. Again having no arguments he absurdly concludes that it makes her a Tsarist. He then uses this absurd logic to make an even more absurd attack, claiming that quoting Okhrana-made protocols of the elders of Zion she can't be on opposite sides simultaneously - being a Tsarist and criticizing Tsarist police. For that he calls her a dilletante! Can that/he get any more foolish?

It's amazing how Bannon believes Trump can achieve anything that Deep State allegedly wants to stop him from doing when he sees Trump only as a victim. He just doesn't do anything. It's all talk about what others do to him. Poor thing. #cognitive_dissonance #coverup

Hey thanks again for all that your doing. In my view, I think that Schiff is trying to set himself up as the next speaker of the house.

This episode reveals the true nature of this show: it's just a smoke screen aimed to help Always Trumpers to survive the cognitive dissonance caused by the impeachment process.