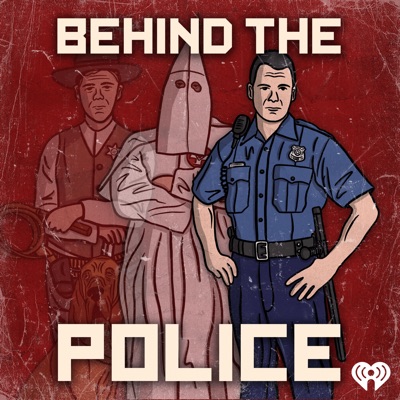 How did American police get so violent? The answer to that question goes back centuries, to the earliest days of this nation. On this special podcast miniseries hosts Robert Evans and rap artist Propaganda (Jason Petty) draw a straight line from the darkest days of slavery, to the murder of George Floyd and the mass violence American police meted out to their citizens this summer.

How The Police Declared War On All Of Us

For the last episode of Behind the Police, we discuss the history of police militarization in the United States, and where it's led us to today.  FOOTNOTES: I'm From Philly. 30 Years Later, I'm Still Trying To Make Sense Of The MOVE Bombing The History of Policing in the United States A New History Tears Down the Myth of the Texas Rangers American Police Training and Political Violence: From the Philippines Conquest to the Killing Fields of Afghanistan and Iraq THE MILITARIZATION OF THE PHILADELPHIA POLICE Militarized policing doesn’t reduce crime and disproportionately hits black communities Multi-Method Study Of Special Weapons and Tactics Teams  The Growing Epidemic of Cops Shooting Family Dogs U.S. spends twice as much on law and order as it does on cash welfare, data show Militarization fails to enhance police safety or reduce crime but may harm police reputation Police officers in the US were charged with more than 400 rapes over a 9-year period 'Who will protect you from rape without police?' More cops. Is it the answer to fighting crime? How shows like ‘Cops’ and ‘Law & Order’ affect our views of the police The Militarization of America's Police: A Brief History

How Police Unions Made Cops Even Deadlier

If you thought police were deadly up till this point, wait until you hear about what unionization did to the U.S. police (hint: it got a hell of a lot of the rest of us killed.) FOOTNOTES: The History of Policing in the United States Study finds misconduct spreads among police officers like contagion The End of Policing  How Police Unions Became Such Powerful Opponents to Reform Efforts The unjust power of police unions How Police Unions Enable and Conceal Abuses of Power Minneapolis Police Union President Allegedly Wore a “White Power Patch” and Made Racist Remarks Police chiefs are often forced to put officers fired for misconduct back on the streets How a 50-year-old study was misconstrued to create destructive broken-windows policing In New York, major crime complaints fell when cops took a break from ‘proactive policing’

How The Police Defeated Lynching Via Torture

Lynching was the sharpest blade in the arsenal of white supremacy for decades, until American police replaced it with the death penalty. In this episode, Prop and Robert trace the evolution of police torture, and how the legacy of 'the third degree' persists in law enforcement to this day.  FOOTNOTES: History of the KKK in Oklahoma Tulsa, Oklahoma, Race Riot Tulsa Timeline The Color of the Third Degree: Racism, Police Torture, and Civil Rights in the American South, 1930–1955 ACCUSED TORTURER JON BURGE DIED LAST WEEK, BUT HIS LEGACY OF BRUTAL, RACIST POLICING LIVES ON IN CHICAGO CHICAGO POLICE TORTURE: EXPLAINED

The History of American Police and the Ku Klux Klan

For years protesters have chanted that the 'cops and klan go hand in hand'. Today, we discuss the very real history behind that, and how it influenced the birth of American policing. FOOTNOTES: KKK in the PD The Red Summer of 1919, Explained At least 2,000 more black people were lynched by white mobs than previously reported, new research finds Extremist cops: how US law enforcement is failing to police itself Yesterday’s Ku Klux Klan members are today’s police officers, councilwoman says The FBI’s Secret Rules Ku-Klux: The Birth of the Klan during Reconstruction The US government destroyed the Ku Klux Klan once. It could do so again Constituting whiteness: The National Horse Thief Detective Association and racial mores in Indiana, 1850–1930 When Watchmen were Klansmen The Rise and Fall of Jim Crow

How The First Police Went From Gangsters, To An Army For The Rich

When U.S. police departments didn't evolve out of slave patrols, they tended to form out of a desire to protect the property of the wealthy. In practice, this meant beating, murdering and arresting people who didn't want to work 12 hour days until they died. FOOTNOTES: Krypteia: A Form of Ancient Guerrilla Warfare  The Police Journal: Theory, Practice and Principles The Beginning of American Policing How Stereotypes of the Irish Evolved From ‘Criminals’ to Cops REMEMBERING THE 1906 STRIKE FOR UNION IN WINDBER, PENNSYLVANIA State Police were warned about possible racial bias in car searches. The agency's answer? End the research. The Pinkertons Still Never Sleep

Slavery, Mass Murder and the Birth of American Policing

Ever wonder how Policing started in the U.S.? In this episode, Robert and Prop trace the bloody birth of American policing, from Ancient Greece, to the slave-holding South, to the streets of Ferguson, Missouri today.  FOOTNOTES: Myths and Realities of Crime and Justice A Brief History of Slavery and the Origins of American Policing Slave Patrols: An Early Form of American Policing How the U.S. Got Its Police Force Slave Patrols The History of the Police The History of Policing in the United States Police Dog Bites Black Man A Look at Urban Violence & Police Brutality in Ancient Rome

Behind the Police Trailer

How did American police get so violent? The answer to that question goes back centuries, to the earliest days of this nation. On this special podcast miniseries hosts journalist, Robert Evans and rap artist, Propaganda (Jason Petty) draw a straight line from the darkest days of slavery, to the murder of George Floyd and the mass violence American police meted out to their citizens this summer.
See More
Comments (21)

I couldn’t even get through one episode. It’s annoying honestly. And some stuff is just not 100% right on your views. Not saying the history is wrong.

LoL I wonder which of the commenters here are cops or else "knows a cop & he's nice, so there's no way he'd ever cover up the cold blooded, hate-fueled rage killing of an innocent African American man by his partner in a transparent miscarriage of justice"?

PRop's delight at the absurdity of the truth is contagious.

listened to another episode just to see if what i heard was accurate. this podcast paints large strokes with large brushes which in actuality is not true. there are some bad police officers. that doesn't mean they are all bad. defund the police is the stupidest thing i have ever heard. they do need more training. 3 months ro be able to know the rules and enforce the rules? next doctors are gonna go to school for 3 months. that's crazy short! this poscast spita hate. our police who protect and serve us need our support! god bless american and God bless our police officers!

any chance they can put this in an international context? I know it's about USA police but if it was the same the world over then it's not a remarkable thesis that Robert presents, just a history.

this is by far one of the worst podcasts with fictitious information. what a waste

Fake and stupid. Get real jobs.

propaganda can take some getting used to, but he has insights and value to add, more than some other guests

The first couple of minutes were so bad I stopped listening. Too much giggling and "likes".

This is good but that rapper is incredibly annoying.