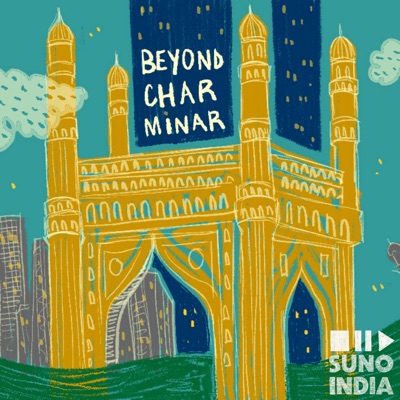 Picnic in Golconda fort, shopping in Charminar- just some of the many memories that every child growing up in Hyderabad makes. With grandiose forts & majestic monuments, these historical places are just some of the few symbols of Hyderabad. But even with 428 years of history, why is Hyderabad's rich history often ignored in textbooks? Why is there apathy and little interest in protecting these structures and the culture around it?
Beyond Charminar is our ode to this city. History aficionado and pucca Hyderabadi at heart Yunus Lasania, aka “That Hyderabadi Boy” will bring-to-you incredible stories of Hyderabad history and it’s rich multi-cultural heritage.
11 Episodes
Reverse We all know of the Nizams and their wealth, especially of Osman Ali Khan, the last Nizam. He appeared on the cover of Time magazine in 1937 when he was the richest man in the world. But much before that, in the first half of the 19th century, the years that passed between the third Nizam Sikander Jah and fifth Nizam Afzal-ud-Dowla were not all rosy. The kings were forced to borrow money from a bank named Palmer and Company. The bank not only lent the Nizams money, but the entire episode turned Hyderabad into a debt-ridden state. In this episode of Beyond Charminar, Serish Nanisetti talks with the host, Yunus Lasania about a major banking scandal in 1800s which shook Hyderabad. In this scandal, the Nizams were forced to borrow a lot of money to maintain British troops and turned Hyderabad into a debt-ridden state. Listen to the full episode to know more. 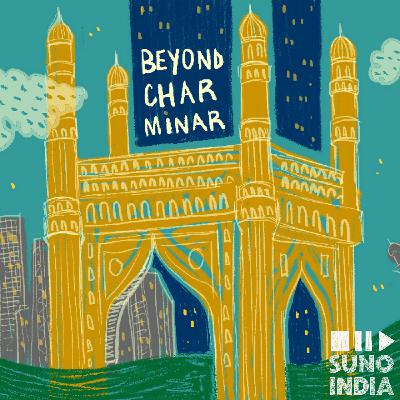 The Golconda or Qutb Shahi dynasty founded Hyderabad in 1591. Its history isn’t known to much of the Hyderabadis, let alone the smaller details of Qutb Shahi heritage scattered in and around Hyderabad. In an effort to document Golconda history, author and journalist Serish Nanisetti gives us an idea of how the fort and city grew, and also a basic understanding of the complex history of the Persian Qutb Shahi Empire, that lasted from 1518 to 1687. It has left an indelible imprint on Hyderabad's core culture.

A house frozen in time

Imagine living in a house where the furniture hasn't changed for over 100 years. That's the kind of heritage Zubair Noor-ul-Haq lives with today. He’s one among the very few Hyderabadis who have managed to preserve the past in the form of their homes and priced possessions, when most of Hyderabad's heritage is slowly being pushed aside. Mostly, those grow up in Hyderbad today don't really know how the city looked decades ago, thanks to rapid urbanisation. In this episode, Yunus explores the rich heritage he comes with, not just in the form of possessions, also through his memories.

The tale of Irani chai and its origin in Hyderabad

Recently, Hyderabad was included in the UNESCO’s culinary heritage list, as the Creative City of Gastronomy.  Hyderabadi’s love their daily cup Irani chai and Osmania biscuit. Hyderabad's oldest Irani hotel, Grand hotel which started in 1935 is still running strong. However, most people are not aware of the Iranian roots, and how the early owners of these cafes or restaurants migrated from Iran. In this episode of Beyond Charminar, Mr. Mohammed Farookh Jaleel Rooz, the owner of Grand Hotel discusses with Yunus, how Irani chai, Hyderabadi biryani and other lesser known Hyderabadi delicacies have evolved.

Secunderabad and an old timers tale

The twin City of Secunderabad, established in 1806/7, was built as the British cantonement, after the East India Company signed the treaty of Subsidiary Alliance with the Nizams in 1798. In this episode, our host Yunus is in conversation with Mr. Shapoor Toorkey, a Parsi old-timer who has seen Secunderabad grow from then. Mr Toorkey comes from a very illustrious family, his grandfather was the first mint master in Hyderabad state. Dakhni as we know it

"Even most Hyderabadis don’t realise that what we speak today is Hyderabadi, definitely not Dakhni, it is closer to the standard Urdu" says Mr Sajjad Shahid. As language is an important thread that speaks about the culture and the power equation of a place at any time, Yunus reached out to Mr Shahid to explore the linguistic roots of the Hyderabad region. Even as Telugu is the language of the region, people in Hyderabad converse fluently in what is known as Dakhni.

While the Nizams stood against acceding to India or Pakistan, the peasants from rural Telangana revolted against the landlords with the support of the communists. Commonly called the Telangana armed struggle, it's an important communist revolt in Indian history. In this episode, our Yunus speaks with Mr Raghupal, who's from a communist family at that time, about what led to this anti-feudal struggle and how the society was back then. In Part two of our episode on Operation Polo, host Yunus interviews  Mr Mohammad Khaja Mohinudeen, now in his eighties. He was among those leaders who led and participated in the 1948 Telangana armed struggle.  He was also forced to go underground for a brief period and spent considerable amount of time with Makhdoom Mohiuddin, a poet and communist leader. Mr Mohinudeen escaped the clutches of Nizam's police thrice and in this episode  gives a completely different perspective of the Operation Polo. In this episode, he shares his lived experiences during the Armed Struggles and tells how Operation Polo had caused a lot of displacement in the erstwhile Hyderabad State.

History, as we know, is told by the winning side, in the way they'd choose to. During Indian independence, the military action Operation Polo annexed the princely state of Hyderabad to India, against the communists and the Nizam rule. This part of history is often not spoken about as much as we speak of the freedom movement or the partition. Yunus Lasania, in his two-part episode on Operation Polo, tells the story of the Hyderabad rebellion through the people who lived through that time. In this episode, Burgula Narsing Rao, the nephew of the first chief minister of Hyderabad state before the creation of joint Andhra Pradesh Burgula Ramakrishna Rao shares his memories and view of the Hyderabad rebellion during the last phase of Nizam's rule.

In this episode of Beyond Charminar podcast, we continue our conversation with Yunus Lasania, who will host the subsequent episodes of Beyond Charminar. We will also speak to the convener of INTACH Hyderabad Ms Anuradha Reddy about Errum Manzil. Erram Manzil is an Indo-European Baroque styled structure built by Nawab Safdar Jung Musheer-ud-daula Fakhrul Mulk in 1870, which the ruling Telangana government wants to demolish to build a new assembly in its place.  For more stories like this, you can listen on www.sunoindia.in (http://www.sunoindia.in/) . Also follow us on Facebook (https://www.facebook.com/sunoindia.in) , Twitter (https://twitter.com/SunoIndia_in) or Instagram (https://www.instagram.com/sunoindia.in) .

Hyderabad's heritage & history when told by journalist Yunus Lasania sounds so intriguing in the weekly history walks that he organises in Hyderabad. So we at Suno India decided to bring this tête-à-tête with Yunus in our introductory episode of Beyond Charminar.  In this episode of our podcast, he discusses why the rich history of Hyderabad heritage is often ignored, some interesting things he dugout in his research and some fascinating facts and enduring myths with our editor, Padma Priya.
See More
Comments (1)

Can you add the transcript or provide sub titles