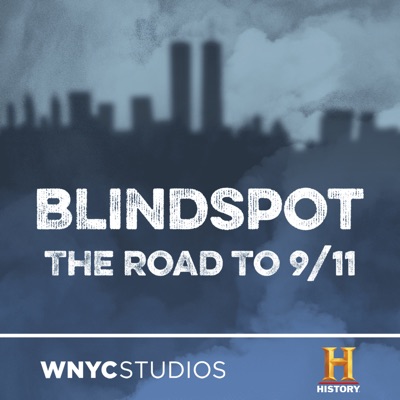 While the devastating images of the 9/11 attacks are seared into our national collective memory, most of the events that led up to that day took place out of public view. Over eight episodes, Blindspot: The Road to 9/11, brings to light the decade-long “shadow struggle” that preceded the attacks. New episodes drop every Wednesday.

Hosted by WNYC reporter Jim O’Grady and based on HISTORY’s television documentary Road to 9/11 (produced by Left/Right), this 8-episode podcast series draws on interviews with more than 60 people — including FBI agents, high-level bureaucrats, journalists, experts, and people who knew the terrorists personally — and weaves them together with original reporting to create a gripping, serialized narrative audio experience.

Blindspot: The Road to 9/11 is a co-production of HISTORY and WNYC Studios.
7 Episodes
Reverse

Introducing Blindspot: The Road to 9/11

Time has flattened our understanding of the 9/11 terror attacks. There’s a sense that they came out of the clear blue sky of the day itself. They didn’t. We'll revisit the evidence and question the people at the center of the story. Voices featured in this trailer include Jim O’Grady, Cofer Black, Steve Simon, John Anticev, Huthaifa Azzam, Michael Scheuer, Emad Salem, Mary Jo White, Cynthia Storer, and Matthew Besheer.  The first two episodes drop Wednesday, September 9. Subscribe now.

The 9/11 attacks were so much more than a bolt from the blue on a crisp September morning. They were more than a decade in the making. Our story starts in a Midtown Manhattan hotel ballroom in 1990. Shots ring out and the extremist rabbi, Meir Kahane, lies mortally wounded. His assassin, El-Sayyid Nosair, is connected to members of a Brooklyn mosque who are training to fight with Islamic freedom fighters in Afghanistan. NYPD Detective Louis Napoli and FBI Special Agent John Anticev catch the case, and start unraveling a conspiracy that is taking place in plain sight by blending into the tumult of the city. It is animated by an emerging ideology: violent jihad.

In 1981, the radical cleric Omar Abdel-Rahman -- known as The Blind Sheikh -- inspires the assassination of Egyptian president Anwar el-Sadat at a military ceremony. One of the soldiers present is Emad Salem. He swears revenge against the Sheikh. Cut to: 1990. Salem is retired from the Egyptian army and scratching out a living as an immigrant in New York. NYPD Detective Louis Napoli and FBI Special Agent John Anticev approach him with a potentially life-altering request. Would he be willing to infiltrate a terrorist cell in Brooklyn led by the Blind Sheikh himself? Salem agrees and, relying on his street smarts and military experience, becomes a trusted member of the cell. He’s on the brink of uncovering a major plot when FBI supervisors make a disastrous decision.

NYPD Detective Louis Napoli and FBI Special Agent John Anticev fear an attack is coming, but without their mole, Emad Salem, they’re blind to the machinations of the Brooklyn terror cell. Then on February 26, 1993, a bomb goes off in the basement parking garage of the World Trade Center, killing six people and injuring more than a thousand. We follow investigators as they chase down clues and round up suspects, including one who bungles his way directly into the hands of the FBI. (His fellow terrorist will later call him “the stupidest, the stupidest, the stupidest of God’s creatures.”) The mastermind, Ramzi Yousef, gets away. Yousef, the most dangerous terrorist in the world, is now hiding out overseas and planning even deadlier attacks.  Back in New York, the FBI convinces Salem to rejoin the terror cell. He does, and becomes the personal assistant of Omar Abdel-Rahman (a.k.a. the Blind Sheikh). One of Salem’s jobs is to communicate by fax with a Saudi financier named Osama bin Laden. Then Salem learns that the cell is planning an attack designed to topple city landmarks and kill thousands.

FBI informant Emad Salem is close to not only the Blind Sheikh but his trusted lieutenant, an ambitious terrorist named Siddig Ibrahim Siddig Ali. Salem soon finds himself at the Statue of Liberty with Siddig Ali; their goal is not to enjoy their visit but figure out how to destroy it with a bomb. It is one of five targets in what will come to be known as The Landmarks Plot -- a plan to cause mass casualties by attacking not only tourist sites but heavily trafficked crossings such as the Holland Tunnel and George Washington Bridge. Salem convinces Siddig Ali and his accomplices to make their bombs in an abandoned Queens warehouse that has secretly been wired with FBI cameras and other recording devices. As the plans near completion, the plotters are arrested. They will eventually be convicted and sent to prison. Law enforcement now better understands that the threat of terror against America is ongoing and international … which makes it even more difficult to fight.

Emad Salem has been called one of the most successful undercover agents in the history of the FBI. In a rare interview, Salem opens up about the personal price he paid for foiling the Landmarks Plot and bringing down a dangerous terrorist cell.  It’s been more than 20 years since Salem testified against terrorists linked to Al Qaeda in open court; he’s been in hiding ever since. He tells WNYC’s Jim O’Grady what it was like to win the confidence of terrorists who, if they’d found him out, might have killed him on the spot. He recounts wild, heart-stopping episodes in which he’s an inch away from disaster but then saves himself through a combination of bravado and fast-thinking. Salem also talks about the strains borne by his wife and two children since he agreed to become a mole. All of which begs the question, “Was it worth it?”

The World Trade Center was built with soaring expectations. Completed in 1973, its architect, Minoru Yamasaki, hoped the towers would stand as “a representation of man’s belief in humanity” and “world peace.” He even took inspiration from the Great Mosque in the holy city of Mecca with its tall minarets looking down on a sprawling plaza. What he did not expect was that the buildings would become a symbol to some of American imperialism and the strangling grip of global capitalism. Our story picks up in Manila -- January 6th, 1995 -- where police respond to an apartment fire and uncover a plot to assassinate the Pope. A suspect gives up his boss in the scheme: Ramzi Yousef, the mastermind of the 1993 World Trade Center bombing. Yousef has been on the run for two years and has disappeared again. Port Authority Detective Matthew Besheer and FBI Special Agent Frank Pellegrino fly to Manila to follow his trail. They learn that Yousef has a horrifying attack in the works involving bombs on a dozen airplanes, rigged to explode simultaneously. President Bill Clinton grounds all U.S. flights from the Pacific as the era of enhanced airline security begins. Yousef’s plot is foiled. But what it reveals about his intentions is chilling.
See More
Comments (3)

weirdly, it's nice to think about a conspiracy other than the one happening right now in real life

wow, the CIA fired there single BEST source of intelligence gathering at the worst possible time, right when the group he was gathering Intel on was planning a massive attack. all because he didn't want to wear a wire for one single occasion because he'd have to testify in court, which would undoubtedly cause his family members living in egypt be murdered as revenge. they're lucky they even found this guy by pure chance. I love his his quote on the way out the door "when they find a replacement for me to help carry out the attacks, don't come knocking on my door." sure enough, the terrorists found another guy but this time the guy was an actual bomb maker willing to kill. The following actions of firing the mole inderectly led to the growth of the group, and then to 9/11.