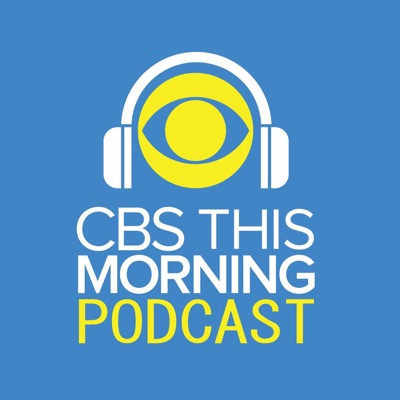 Go beyond the weekday broadcast with the daily "CBS This Morning Podcast.” Listen to in-depth and insightful conversations with newsmakers, authors, executives, celebrities and CBS News reporters.

Subscribe to "CBS This Morning - News on the Go," for the all the news you need to know to start your day in less than 17 minutes.

Last year, CBS News producer Rodney Hawkins shares the story of his family's efforts to restore a nearly 200-year old ancestral cemetery in East Texas. Almost a year after beginning the progress, Hawkins is back with an update. Talking with "CBS This Morning Saturday" co-host Michelle Miller, Hawkins explains how he was able to dig deeper into his family's past with the help of the Lone Star Slavery Project at Stephen F. Austin State University. And what's next for him and his family on this journey.

Rapper Lathan Warlick is helping to transform country music with genre-defying collaborations - including with Florida Georgia Line's Tyler Hubbard. The two discussed their song "My Way" with CBS News' Vladimir Dutheirs - along with the important part faith plays in their lives and music.

At-home COVID-19 tests are becoming a reality. What you need to know.

Testing for the coronavirus is moving from public sites to the privacy of your own home. The F.D.A. has now authorized five over-the-counter COVID-19 tests that give you results in minutes. CBS News chief medical correspondent Dr. Jon LaPook speaks with Dr. Michael Minna, an assistant professor of epidemiology, immunology and infectious diseases at the Harvard School of Public Heath and a physician at Brigham and Women's Hospital, about everything you need to know about these tests.

A new documentary series follows teenage environmentalist Greta Thunberg's journey around the world as she witnesses firsthand the effects of climate change. CBS News' Adriana Diaz spoke to Thunberg about being a leader in the climate movement and how the lessons we've learned fighting the pandemic can help us battle climate change. The three-part documentary series, "Greta Thunberg: A Year to Change the World," premieres April 22nd on PBS.

Fans want "Roots" actor and "Reading Rainbow" host LeVar Burton to be Jeopardy!'s next host — and he's ready for it. A petition has collected more than 200,000 signatures calling on the show's producers to hire him. CBS News' Vladimir Duthiers spoke with Burton, who says he's more than ready to take on the gig. He also discusses the legacy of the iconic mini-series "Roots" and the children's educational series "Reading Rainbow."

Country music duo TJ and John Osborne of Brothers Osborne talk with "CBS This Morning" co-host Anthony Mason about their decision to take a break after John reached a breaking point with his mental health and how they banded together as TJ decided to come out as gay this February.

Riz Ahmed on his historic "Sound Of Metal" Oscar nomination, taking risks, and being the underdog

Riz Ahmed earned his first Oscar nomination for his performance in "Sound Of Metal," becoming the first Muslim ever nominated in the Best Actor category. He talks with Anthony Mason about being drawn to rapping and acting as a child, and immersing himself in drumming, the deaf community, and addiction recovery circles for his role as Ruben Stone.

Esther Perel on work, relationships and grieving during the pandemic

New York Times best-selling author and psychotherapist Esther Perel discusses balancing working from home and maintaining healthy relationships. Perel, the author of “Mating in Captivity” and “The State of Affairs,” is out with the second season of her popular Spotify podcast, “How’s Work?”

Hunter Biden opens up to “CBS This Morning” co-host Anthony Mason about his revealing new memoir, "Beautiful Things." He discusses his decades-long battle with alcohol and drug addiction, an intervention staged by his family, and why making amends to his late brother Beau was the hardest part of getting sober. Less than 100 days into President Biden's first term, his son addresses the scandals that put him front and center in the 2020 presidential campaign, including possibly incriminating documents found on a laptop that may have belonged to him and the federal investigation into his taxes. "Beautiful Things" is published by Gallery Books, an imprint of Simon & Schuster, which is a division of ViacomCBS.

Cruises ships have not set sail from a U.S. port with passengers in over a year because of the coronavirus pandemic. Richard D. Fain, chairman and CEO of Royal Caribbean, tells CBS News transportation correspondent Errol Barnett how his company is preparing its ships to be COVID-safe before taking to the seas. Fain shares when he expects the industry and its 100,000 U.S. jobs will return to business as usual.

CNN anchor Brooke Baldwin examines the power women can wield when they work together in her new book, "Huddle: How Women Unlock Their Collective Power." She tells CBS News' Vladimir Duthiers how covering Donald Trump's presidential inauguration and the Women's March inspired her to find her own "huddle" of women. Baldwin also shares why she has decided to leave CNN after 13 years and what’s next for her.

Actor Nathan Lane on returning to the stage

For one afternoon, Broadway came back to life for the first time in over a year. Part of the New York Pops Up program Tony Award winners Nathan Lane and Savion Glover took to the stage to perform at the St. James Theater. CBS News' Vladimir Duthiers spoke with Lane the day after the performance about performing to a limited audience wearing masks and socially distant. They also discuss the 25th anniversary of the film "The Birdcage."

Today, the typical White household has about ten times the accumulated wealth of the typical Back household.  Some scholars attribute the current racial wealth gap in America to the raise of modern suburbs. David Troutt, a law professor at Rutgers University and author of The Price of Paradise: The Costs of Inequality and a Vision for a More Equitable America, tells CBS This Morning co-host Tony Dokoupil that much of the disparity in wealth and the segregation we see today can be traced back to the growth of America’s suburbs.

The nearly century-long battle to pass the Equal Rights Amendment

Columbia University Law professor Katherine Franke joins CBS News congressional reporter Nikole Killion to discuss the status of the Equal Rights Amendment (ERA). Initially proposed in 1923 and passed by Congress in 1972, the amendment would enshrine sex-based equality in the U.S. Constitution. Finally ratified by the required number of states in 2020, the status of the ERA remains an open question. Franke, head of the ERA Project at Columbia University's Center for Gender and Sexuality Law, explains the current roadblocks and additional steps required in order to have the Equal Rights Amendment officially added to the U.S. Constitution as the 28th Amendment.

In his new book, “The Secret Apartment,” author Tom Garvey says he spent three years living and working inside the Veterans Stadium in Philadelphia. He spoke with CBS News' Elaine Quijano about how he pulled it off, how it helped him cope with coming home from Vietnam, and why he's telling his story now.

Jessica Lessin, the founder and editor-in-chief of "The Information" joins CBS News' Vladimir Duthiers to discuss the latest in tech news. Lessin discusses the future of remote working, how virtual realty could change our everyday lives, the new audio app "Clubhouse" and Facebook's Mark Zuckerberg. Founded in 2013, "The Information" is a subscription based-digital media company that covers the tech industry.

Vice President Kamala Harris on the push for gun reform, the situation at southern border & attacks on Asian Americans

Vice President Kamala Harris joined the "CBS This Morning" broadcast for an exclusive interview to discuss the White House's push for stricter gun control regulations following the recent mass shootings in Georgia and Colorado. Harris also addresses the influx of unaccompanied minors crossing into the U.S. and what the Biden administration is doing to curb migration at the border. Plus, her reaction to the recent spike in bias attacks against Asians, as the country's first Asia American vice president.

Jesse Ashlock, U.S. editor for Condé Nast Traveler, joins CBS News correspondent Mola Lenghi to discuss what travel in 2021 may look like. After the coronavirus pandemic canceled or delayed many trips last year, Ashlock says that leisure travel will pick up in the second half of 2021 as confidence increases with more vaccinations. He sees an increase in domestic travel, road trips and destinations compatible with social distancing. Ashlock says travelers should be have an "increase tolerance of uncertainty" if planning a trip this year. Plus, hear some of the destinations Condé Nast Traveler has outlined as 21 of the best places to visit in 2021.

Author Tim O'Brien on returning to writing, fatherhood and his obituary

Novelist Tim O'Brien, best-known for his books that focus on the Vietnam War, is the focus of a new documentary - "The War and Peace of Tim O'Brien" - chronicling his efforts to write his first book in 15 Years. The author of "The Things They Carried" and "Going After Cacciato," tells CBS News' Vladimir Duthiers why he decided to stop writing in the first place and what prompted him to return to his computer. A finalist for the Pulitzer Prize and the National Book Award, O'Brien explains why he does not like being called a war writer and he shares details about the new novel he is currently working on. Plus, he tells Duthiers that he just finished working on the screenplay for "The Things They Carried," set to star Tom Hardy and Pete Davidson. The documentary, "The War and Peace of Tim O'Brien," is available on demand.

A Father's Story on Dealing with His Son's Incurable Disease

Miguel Sancho chronicles his family's journey of confronting their son's diagnosis of a rare and lethal immune deficiency in the new book, "More Than You Can Handle: A Rare Disease, A Family in Crisis, and the Cutting Edge Medicine That Cured The Incurable." Sancho joined CBS News correspondent Mireya Villarreal to share how the ordeal tested him and his marriage. Falling ill at two-months old, their son Sebastian would send the next six years in some degree of self-quarantine. Sancho tells Villarreal how the family came out on the other side stronger.
See More
Comments (10)

Love Richard and Outlander, so this was a lot of fun. Thank you! (:

where is Friday's news and mondays news? please put the date in the title of the episode

you should get an interview with Foundation for PR and Discover Puerto Rico to get their statement on this situation....

turn off the back ground music? why does it play so long

You have to approve of every picture on your yearbook page. Duh...! He knew.

First time listening to your podcast and it's a great service! I try to watch CBS THIS MORNING everyday but miss things here and there. So thank you.