DiscoverCities and Memory - remixing the world 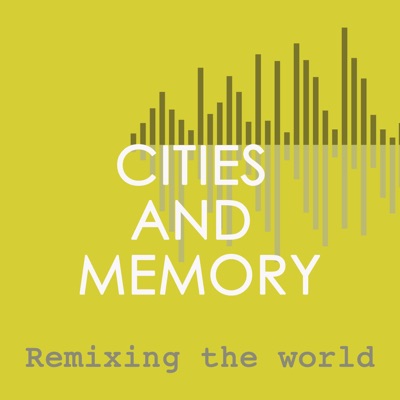 Cities and Memory - remixing the world

Cities and Memory remixes the world, one sound at a time - a global collaboration between artists and sound recordists all over the world.

The project presents an amazingly-diverse array of field recordings from all over the world, but also reimagined, recomposed versions of those recordings as we go on a mission to remix the world.

What you'll hear in the podcast are our latest sounds - either a field recording from somewhere in the world, or a remixed new composition based solely on those sounds. Each podcast description tells you more about what you're hearing, and where it came from.

There are more than 5,000 sounds featured on our sound map, spread over more than 100 countries and territories. The sounds cover parts of the world as diverse as the hubbub of San Francisco’s main station, traditional fishing women’s songs at Lake Turkana, the sound of computer data centres in Birmingham, spiritual temple chanting in New Taipei City or the hum of the vaporetto engines in Venice. You can explore the project in full at http://www.citiesandmemory.com
3002 Episodes
Reverse 3920: Garlands for Than Tao Mahaprom

Bangkok shrine dances reimagined by Vlad Suppish. "Before making a reimagined version of the recording I've watched a few videos about Erawan Shrine and its deity - Than Tao Mahaprom.  "What caught my attention is the amount of offerings to it, especially garlands. Layers upon layers of them.  "Also layers of overpasses above the shrine. Spiritual sanctuary in the heart of large and busy city. "My version is precisely that - layers upon layers of heavily processed original recording. No external sound sources were used.   "I hope that while listening to my composition, people will get some of the virtues from Than Tao Mahaprom - kindness, mercy, sympathy and impartiality."

Field recording from Bangkok, Thailand by Shaun Malone. "A recording of several ritual dances at Erawan Shrine, at the corner of a very busy and noisy intersection in central Bangkok. The BTS (skytrain) passes by during the second dance. Recorded 5 Jan 2020." Elephants in Mweya, Uganda, July 2018 recorded by Daan Hendriks. "While in technical terms I don't consider this my "best" recording, it is one of my favourites of the last year due to the intense emotions conveyed by this elephant herd. "It was recorded during an overnight session in the Mweya peninsula of Queen Elizabeth National Park in Uganda, July 2018. I had tracked this herd during the day in my car as far as I could until they disappeared into the  bush, after which I set up a microphone rig in the general direction of the river where they were presumably heading. I left this mic behind as it recorded throughout the rest of the day, night and the next morning. "There was a real intensity in the air that night, with the frog chorus going at full strength, insects stridulating feverishly, occasional strong wind gusts and regularly barking hippos. I am not sure what caused distress to this elephant herd but they vocalised all night, continuously rumbling and often screaming and trumpeting loudly. The overall result was a night that conveyed a really wild and primeval sound scape, and for that reason I love this recording quite a bit."

Elephants in Uganda reimagined by Peter Hodgkinson. "Elephants are capable of hearing at low frequencies and are most sensitive at 1 kHz" so the  exploration began figuratively inside the elephant head between the two wondrous ears.  "The original recording is wonderful in itself, but given an emphasis on the infrasound element of the elephant and the rhythms of breath through the trunk, the piece unfolded. Unfortunately, so did the Mac computer and the result was edited on a not so familiar software on a new PC.  "I hope to complete a surround sound mix in the future to give real acknowledgement to elephant acoustics. The piece is entitled 'Proboscidean lament' in homage to the terrible plight of the elephant today." Thingvellir national park reimagined by Allis Hamilton. "This track is a conversation between midwinter, in my bushland home of Heron Cottage in Southern Australia, with that of the Iceland Thingvellir National Park. It is a song of the elements of rain and ice, wind and spirit.  "The night I first heard the Icelandic track was an evening of an enormous storm, a tornado of sorts, and the recordings I made of that fierce wind and the trees in my garden swaying and swirling in their unified response to the wind created my first thoughts for the music.  "Over the winter, through frosts, thunderstorms and rain I recorded the sounds of the natural world outside my squeaky front door. Alongside these I played some piano, ocarina; and added vocal layers laid like whispers on the wind over the footsteps of the other sounds, including the Icelandic recording which bookends the song alongside thunder and the calls of the mystical and mythic black cockatoos, the rain bringers."

Thingvellir National Park, Iceland recorded by Richard Watts. "The sound of the wind, tourists and walking on a stone path." Kafiche cafe in Sarajevo reimagined by Andy Billington. "The original field recording of a string instrument being played in the city of Ferhadija is beautiful, uplifting and haunting, filled with drones and complex melody lines. You get a sense of the town, people and architecture with the natural reverb. "I wanted to try and capture these architectural parts and capture a sensation you were (like in the film Enter The Void by Gasper Noi) floating around the city.  "I layered the sounds, resampling them many times onto tape cutting and repeating the exercise and changing the pitch. Finally, a sort of sonic framework emerged and was anchored by soft synths.  "I then re-added the original field recording, cutting out phrases of melody, adding echo and positioning until happy with the track. Ferhadija Summer was completed." Saint Petersburg art exhibition reimagined by Simon Woods. "The piece is built up from the original field recording. Added to this is an ever changing series of sequences, rhythms and sounds – the notes, scales and chords dictated by the original recording.  "The music is constantly changing with new sequences coming in and dropping out – at least one new track (often more) was added each day, 31 in all."

3910: Laboratory of the future

Recording from the Manege Exhibition Hall in Saint Petersburg, Russia by Valo Tsvetkutia. "The Laboratory of the Future is an exhibition that took place in the "Manege", at which I volunteered at.  "There was an art installation, a piano cut in two, and there was a magnetic coil that is making the sound you hear in the recording." Uzbekistan Khiva Star hotel sounds reimagined by Martha Riva Palacio Obón. "Night is a liminal spacetime where, paraphrasing Salomé Voegelin, different rhythms and beings converge creating simultaneously many possible worlds.  "In this brief aural essay, I bring forward the background sounds in the field recording and mix them with a hybrid chorus of human and insect voices. The mechanic hum is replaced with the reverberation of wine glasses.  "The main structure of this piece is built from two tracks that run in different directions: backwards and forwards.  "Past, present, future: I evoke the memory of many nights spent alone and with company. A cacophony that flows into silence. Nocturnal disjunctures and entanglements, every ghost requires a translation." Soundscape recorded at the Orient Star Hotel in Khiva, Uzbekistan by Mark Wilden. 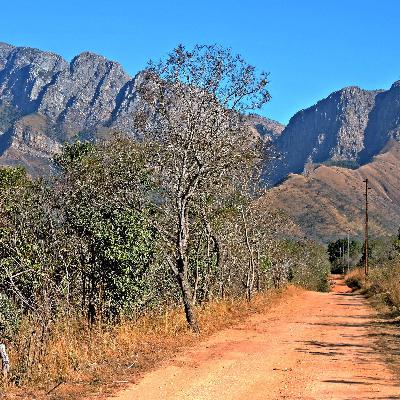 Klein Karoo nature reserve, South Africa, reimagined by Emmy Tither: "I was inspired by the dry and the dust." 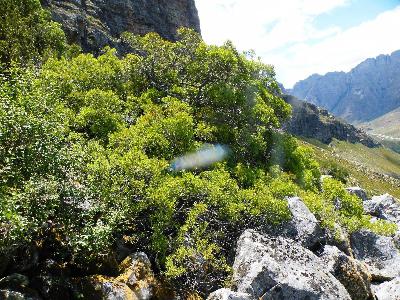 Klein Karoo nature reserve, South Africa, recorded by restive. "Field recording made on a recent trip to the Klein Karoo near Ladismith. This was recorded during the day; you can hear the sound of a tractor plowing a field, workers in the fields, water rushing down an irrigation furrow, various bird and frog calls, the occasional car passing on the road." Laos forest sounds reimagined by Martin Juenke. "I took the recording, cleaned and streamlined it, pitched it down a bit to avoid harshness and fatiguing highs and stretched it to an appropriate length.  "Then I added kind of Berlin School arpeggios and harmonies, a layer of pulsing tones and other stuff to create a rich, calm, flowing atmosphere."

Recording from a forest near Luang Prabang, Laos, recorded by Manuel Oberkalmsteiner. "Birds singing in the forest somewhere in the nowhere." Petra traditional flute music reimagined by Nigel Lloyd. "The reimagined piece is built from a few recordings taken on a trip to Jordan and Israel in 2019. The recordings were mostly from Petra in Jordan during a sound and light show where a man was playing a traditional piece of flute music. "On the long walk down to the building in the accompanying photograph there was an atmospheric drone echoing through the cleft in the mountain called the Siq. In the piece you can also hear some chattering sparrows and a recording of people at the Wailing Wall in Jerusalem."

3902: Traditional music from the Rose City

Field recording from the famous archaeological site at Petra, Jordan (otherwise known as The Rose City due to its pink sandstone cliffs), during a sound and light show featuring pieces of traditional flute music. Recorded by Nigel Lloyd. Pyramid of Tirana reimagined by Museleon. "What things do you think of as summer? "Sun, sea, sandcastles, ice creams melting, strawberries and cream and aliens enjoying a competitive game of tennis at Wimbledon… "Hang on there... aliens at Wimbledon? "Starting with the field recording from the Pyramid of Tirana, I heard a tiny sample of what seemed like cutlery or metal clanging, that when looped sounded like a game of ping pong. This became the rhythmic basis of the whole track.  "Like most of my tracks they go through metamorphoses during development, and a ping pong match became something bigger in scale when I came across a field recording of a tennis match on Freesound - Tennis Match by Huubjeroen (licensed under Creative Commons 0  https://freesound.org/people/huubjeroen/sounds/114052). " edited the match down and rearranged it into a shorter length and then took several samples from the Tirana sound file to create the rallies and ball sounds. I did not process the samples at all, as I liked the sounds of the metal clanging and banging and so it sounds as if the players are using large metal ladles to play the match. "The final idea of my track came from the group of alien monsters I have sitting on top of my studio speakers …small rubber ones... and my imagination ran riot as I thought it would be fun to imagine them having a game of tennis. The MIDI information from the field recordings was used as a basis for synths, to create alien type sounds. For the full effect the track is best listened through headphones. "Aliens for tennis, anyone?"
See More
Comments (1)