Five Hot Takes is a new, fun, and educational music podcast brought to you by American Songwriter Magazine and GRAMMY nominated singer/songwriter, and podcaster Dave Barnes. Follow along each episode as Dave host’s a multitude of different artists/entertainers across all genres of music for a fresh perspective on their, Five Hot Takes!
15 Episodes
Reverse

Today we get to hear Lucie's scolding hot takes on music ranging from Diana Ross to Jack White to Prefab Spout. Here are her hot takes: Hot Take 1: “Chain Reaction” by Diana Ross, written by the Bee Gees, is the motherload of key changes with 8 of them throughout the song.Hot Take 2: “Chain of Fools” by Aretha Franklin is basically one chord the entire song.Hot Take 3: Jack White’s “Take Me With You When You Go” has the craziest tempo change Lucie has heard in awhile. He has his own set of rules and Lucie admires that.Hot Take 4: REM’s “Losing My Religion” has no chorus yet blew up in the pop music world.Hot Take 5: Prefab Sprout’s “The King of Rock ‘N’ Roll” has a chorus with some of the most random but catchy pop lyrics: “hot dog, jumping frog, albuquerque.”

On this episode, Dave covers hot takes on the stresses of being a successful singer/songwriter, Lionel Ritchie, "Sweet Home Alabama", Led Zeppelin and more! Here are the 5 Hot Takes: Hot Take 1: Successful singers and songwriters who wrote their own songs will never be able to enjoy their songs like we enjoy them. When you have created something, you will always see the cracks in it.Hot Take 2: “Say You, Say Me” by Lionel Ritchie is one of Dave's favorite bizarre bridges in pop music history. It jumps 25 bpm in tempo in addition to implementing a weird key change.Hot Take 3: “Sweet Home Alabama” is perfectly executed in every way and what Dave would pick as the southern culture song he is most proud of.Hot Take 4: Dave knew Bobby Brown’s “Humpin’ Around” as a kid and thought Led Zeppelin’s “Dancing Days” stole from it the first time he heard it.Hot Take 5: “Missing You” by Jon Waite is the quintessential pulsing eighth note song.

Dave's favorites of Cory Wong includes:Hot Fav 1: “Golden” began as an instrumental but quickly morphed into a full track when Cory met Cody Fry on the internet, whom he refers to as his “German counterpart.” They became close friends and writing partners, doing both from different parts of the globe.Hot Fav 2: “Limited World” started as an instrumental, but wasn’t doing it completely for Cory. With his decision to add vocals, he sent it to Caleb Hawley and told him to go wild.Hot Fav 3: Cory was fiddling around on guitar, playing Eric Clapton’s “Change the World” when the first version “Meditation” came to him. While playing on Stephen Colbert’s Late Show, Cory and Jon Batiste combined forces to complete the song.Hot Fav 4: “Blackbird” is a song that Cory consistently puts on to calm his mind. He wanted to experiment with acoustic arrangements during quarantine and figured it was a great cover to start with.Hot Fav 5: “Cory Wong” by Vulfpeck solidified Cory as a mainstay in the band. The song was originally from a Vulfpeck tour vlog where Cory and Joe Dart improvised during a jam sesh. They couldn’t think of a name for the track and thus, “Cory Wong” was born.

Cory Wong will wow you with his five hot takes. Here are the hot takes this week: Hot Take 1: Whether or not they release another record, Sugar Ray might have the greatest Spotify top 5 of all-time.Hot Take 2: Smash Mouth’s “Fush Yu Mang” and “Astro Lounge” are two of the greatest produced albums of all-time.Hot Take 3: They might want to revisit the mix on The Doobie Brothers’ “Takin’ It to the Streets”; the bass is ridiculously loud.Hot Take 4: Earth, Wind & Fire could’ve used another take on “September”. The trumpet and bass lines are pretty off at times.Hot Take 5: All of Cory’s favorite guitar tones he’s ever recorded have come from going DI and using plugins, not amps.Find out more from Cory Wong at www.corywongmusic.com. Find more from Dave Barnes at DaveBarnes.com. American Songwriter Podcast Network

On this episode, Dave and Jon McLaughlin cover Jon's 5 hottest takes on music. Hot Takes include: Hot Take 1: "Don't Get Around Much Anymore" written by Duke Ellington and Bob Russell is a classic standard that is the perfect example of what Dennis Herring calls a great song: "a happy melody with sad lyrics." Hot Take 2: Go West's "The King of Wishful Thinking" has the greatest chorus of all time.Hot Take 3 (&4): Billy Joel's "New York State of mind is a master class in 1 to the Major 3/7 progression.Hot Take 4: "Georgia" performed by Ray Charles and Sublime's "Santeria" also have the same dramatic chord change from the 1 to 3/7, and evoke that same extreme emotion. Hot Take 5: "Come By Me" by Harry Connick Jr. is the best example of bridging the gap between instrumentalism and extremely catchy verses.  American Songwriter Podcast Network

On this episode, Dave covers hot takes on Christina Aguilera, Dawes, Elton John and Coldplay.  His hot takes include: Hot Take 1: In Christina Aguilera’s “What A Girl Wants”, the chorus starts with the end of the phrase, while the middle of the chorus starts with the beginning of the phrase.Hot Take 2: Taylor Goldsmith from Dawes is one of the best lyricists of this generation.Hot Take 3: Elton John’s “Rocket Man” has an unconventional double strum guitar pattern that juxtaposes well with the musical thinking of 2020, which is centered on perfection and fine-tuning.Hot Take 4: Dave’s favorite key change in all of rock music comes in Def Leppard’s “Armageddon It”.Hot Take 5: “Yellow” by Coldplay and “I Can’t Make You Love Me” by Bonnie Raitt both have chord changes in the last waning seconds of the songs that catch you off guard. American Songwriter Podcast Network

From examining a song that took 6 years to write, to a song that took 15 minutes, Drew explains his perspective and how its transpires into a complete song, from lyrics, melody to how the instrumentation supports what Drew was trying to convey. Dave's FavsDave's Fav 1: “Nothing But Trouble” took Drew around 6 years to write, with multiple versions and revisions before the final release.Dave's Fav 2: Drew wrote “Live Forever” in fifteen minutes as he contemplated his sister and her kids moving to Panama for work. It’s also his favorite song he has ever written.Dave's Fav 3: Drew wanted “Family” to sound like growing up in a big family, as he did. Some words he uses to describe the tone of the song include “cacophonous”, “chaotic”, “loud”, in addition to “beautiful” and “hopeful”.Dave's Fav 4: “You’ll Always Be My Girl” was written as a promise to Drew’s 3-year old daughter. He also wrote it by simply fooling around on the guitar and freestyling lyrics.

On this episode, Dave and Drew Holcomb cover Drew's hot takes on music. Hot takes include: 1.) Willie Nelson is one of the greatest jazz singers of all-time.2.) Percy Sledge’s “When a Man Loves a Woman” is the best male vocal performance of all time.3.)  Sinéad O'Connor’s “Nothing Compares 2 U” is Drew’s favorite recording of all time.4.) When it came out, Ray LaMontagnes’ “God Willin’ & The Creek Don’t Rise” was Drew’s least favorite LaMontagne record, and it has since become his absolute favorite of Ray’s.5.) If Drew could have anyone’s career in music history, it would be Tom Petty’s.Follow Dave Barnes on social media at @DaveBarnesMusic. Check out our network and more content from AmericanSongwriter.com.

On this episode, Dave covers hot takes on Boyz II Men, Earth Wind and Fire and a hot take on lyrical content of songs. His hot takes include the following: Boys II Men, End of the Road. They do not sing the same melody on the verses.One of the best bass lines of all time, Spacehog - In The Meantime.September by Earth Wind and Fire speeds up 10 BPM in 3 and 1/2 minutesThe rhythm guitar on the cover of “Got to Get You Into My Life” by Earth Wind and Fire body slamming the pocket on this iconic shuffle.Sometimes the simplest lyrical moments in a song are the most profound.Follow Dave Barnes on social media at @DaveBarnesMusic. Check out our network and more content from AmericanSongwriter.com. American Songwriter Podcast Network

Make sure to subscribe to stay up to date on all the Hot Takes!

Make sure to subscribe to stay up to date on all the Hot Takes!  American Songwriter Podcast Network 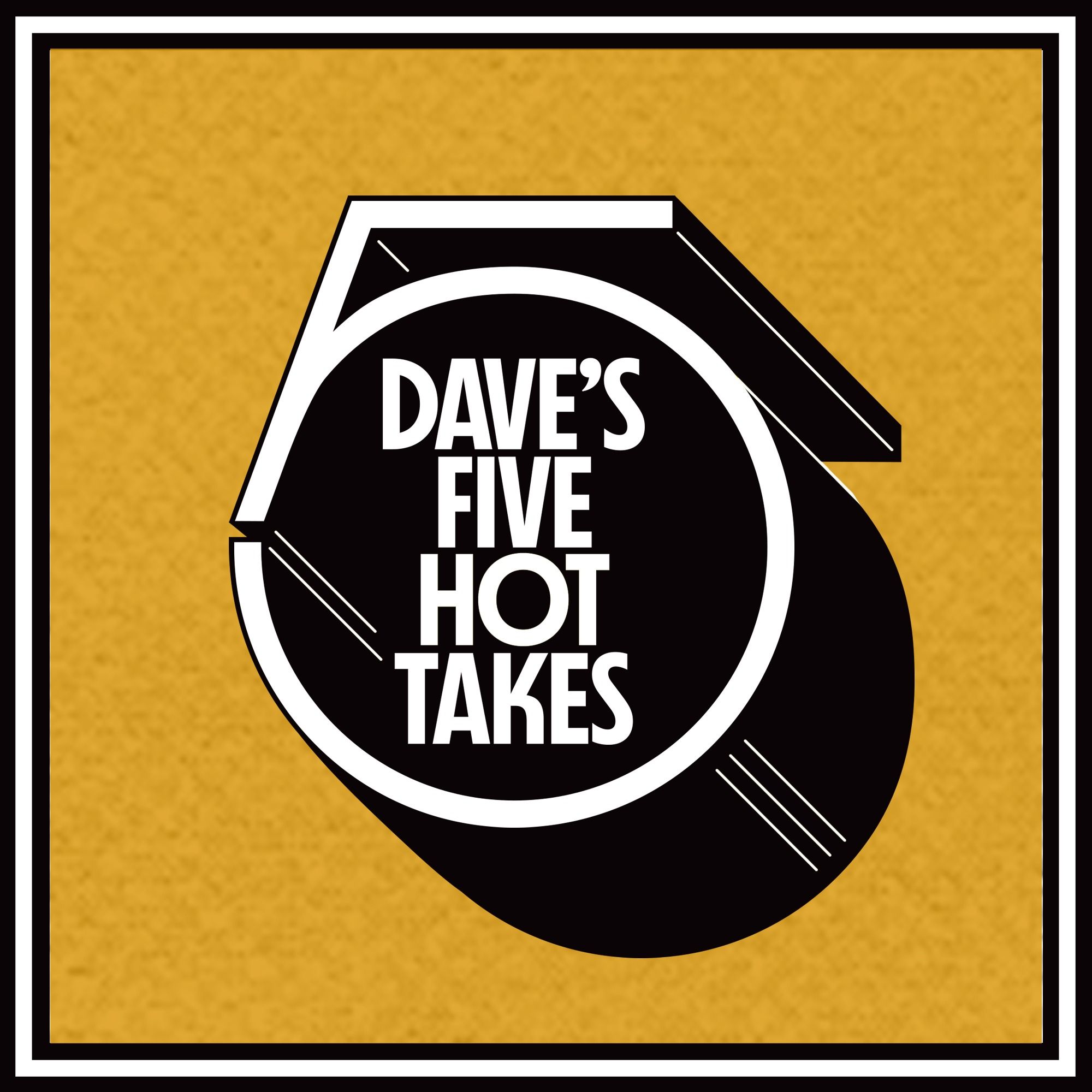 This whole thing puts a grin on my face...now listening to those key changes on repeat! Thanks Dave!!!

Been looking forward to this!!!