DiscoverDid I Ever Tell You The One About... Podcast 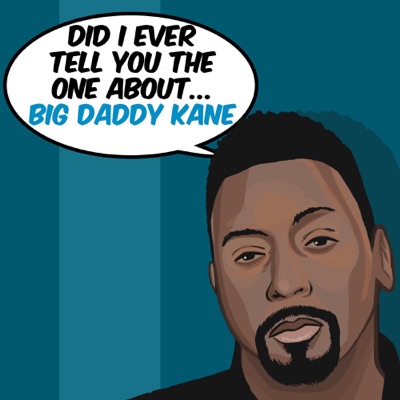 Did I Ever Tell You The One About... Podcast

A deep dive into the lives of your favorite artists told by the artists, family, friends, and other artists. We take a look at the stories of the artists who made the music that we love. Told in IMMERSIVE SOUND DESIGN, so that the stories are enveloped in 5.1 stereo sound, giving you sound around the story-telling. These are the stories of our musical heroes told the way they deserve to be told.

Trailer: Introducing 'Did I Ever Tell You The One About... Big Daddy Kane'

Big Daddy Kane, born Antonio Hardy, is easily one of Brooklyn's most known artists. He was introduced to the world through one of Hip Hop's first and most legendary crews, the Juice Crew.  Here, Kane tells us first hand how he became the man he is today. From his humble upbringing in Brooklyn, NY with his family to recording with legends like Quincy Jones, Barry White and Pattie LaBelle. His journey was filled with hope, encouragement, failures and achievements. Not only did he have what it took to be on record, but to be on the big screen as well, making movies with Mario Van Peebles and Robert Townsend. He's top 5 dead or alive and has been everywhere and done everything a person could do. Including being in Madonna's Sex book.

Is Brooklyn In The House?

On the premiere episode of Did I Ever Tell You The One About...Big Daddy Kane, Kane paints a vivid picture of his early years growing up in Brooklyn with his parents and brother Shane.  He takes us to the park jams where the DJs would play classics and party goers who had the courage would reach for the mic.  As Kane himself started to become an MC, he'd travel from project to project battling anyone that stepped to him.  But the world wasn't ready for Kane yet.  Only the streets were. Additional commentary by Disco Ritchie, Little Daddy Shane, AB. Money, Steve Brown, Cliff Love and Grandmaster Caz

The Making Of An M.C

Kane tried being in groups early on, but ultimately after meeting Mister Cee in high school, the two of them would become a duo, opening up for local shows. Kane soon learns about Biz Markie and seeks him out for a battle at the infamous Albee Square Mall.  But what started as a battle turned into a lifelong friendship with Biz taking Kane under his wing.  Once Biz became a recording artist with the newly formed Juice Crew, he made sure Kane was right there with him.  Their bond was so tight that at Biz Markie's Union Square show he announced that Kane was the newest member of the crew.  But not everybody in the Juice Crew agreed. Additional commentary by AB. Money, Steve Brown, Mister Cee, Cutmaster Cool V, MC Serch, Chris Rock and Cliff Love.

Biz's Union Square show was like a homecoming party for Kane.  He had made it like all his Albee Square friends that were in attendance knew he would.  Kane knew early on what it took to become successful.  He witnessed it first hand living across the street from Divine Sounds.  He saw them go from a neighborhood DJ sound system to a recording act with a hit single, "What People Do For Money".  He befriended them and was there to witness their success and at some points help out along the way.  But meeting Marley Marl and sitting in his studio where so many other hits were made was the fuel he needed to make his own hits. Additional commentary by Little Daddy Shane, Disco Ritchie and AB. Money

Kane finally gets the opportunity to make a record and the song that takes off from his 12" is "Just Rhymin' With Biz".  It was a freestyle with Kane and Biz Markie rhyming over the beat to Kane's "Somethin' Funky" track.  The record did well at radio in the tri-state, but Kane couldn't get booked for a show.  But he knew why.  Sitting at home broke, Kane kept pressuring Fly Ty from Cold Chillin'/Prism to put out a new record.  Once the green light was given, Kane brought a couple records to Marley's house to sample for his next single.  The outcome.....RAW. Additional commentary by Cutmaster Cool V, Drip, Mister Cee, Cliff Love and Steve Brown

The Juice Crew were clicking and touring as a unit.  Marley Marl was now focusing on his own album and wanted Kane and G. Rap to be on a track together.  But when Marley suggested an unknown Masta Ace join the song, tension got thick.  Reluctantly the song got recorded and ended up becoming "The Symphony", one of the greatest posse cuts in history.  Kane also reflects on the Juice Crew/BDP wars and how his relationship with both MC Shan and KRS-ONE made him sit that one out...sort of.  Then he finds himself in a battle that was more fabricated than reality.  Fueled by fans, the Kane vs Rakim rumors was something everyone wanted to see, but something that wasn't being talked about behind the scenes. Additional commentary by Masta Ace, Mister Cee, Cutmaster Cool V and Steve Brown

Touring the world opened up Kane's eyes that he had a wider audience.  On "It's A Big Daddy Thing", Kane wanted to tap into that audience.  The creation of songs like "Smooth Operator", "Warm It Up, Kane", "Young, Gifted And Black" and "I Get The Job Done" not only have hilarious stories behind them, but also were made to show the growth of Kane as an artist.  Kane's popularity was expanding and it wasn't just amongst his fans.  He was now being called on for features by fellow musicians such as Rick James and Quincy Jones. Additional commentary by Mister Cee. Cutmaster Cool V and AB. Money

From 1990 to 1991 Kane released two more albums, "Taste Of Chocolate" and "Prince Of Darkness".  On the first, Kane worked with unique artists such as Malcolm X's daughter Gamilah Shabazz and Rudy Ray Moore aka Dolemite.  Kane was now at a point in his career where he was able to reach out to the artists that he grew up idolizing.  Artists like Barry White who he found he had much in common.  On "Prince Of Darkness", the posse cut "Come On Down" was to have a different line up.  Luckily Q-Tip was there to fill the gap. Additional commentary by Mister Cee and Cutmaster Cool V

We On A World Tour

Kane continues to push the envelope of Hip Hop by merging it with R&B and working with the legendary Patti LaBelle.  After touring with Patti, Kane took notes of what he could incorporate within his show once again proving he was more than a Hip Hop artist, he was an artist period.  He goes out on his 1st headlining tour with Digital Underground, Queen Latifah, MC Lyte & 3rd Bass.  Memories of backstage water gun fights and building with a young Tupac Shakur are takeaways from these more innocent times. Additional commentary by Drip, AB. Money and Mister Cee

Meteor Man, Gunmen and Posse all showed Kane had acting chops in movies.  Unfortunately, Kane himself had proven to be his own worst enemy.  After his time in Hollywood was over, Kane went back to Warner Brothers and found himself contemplating his future with the label.  He realized he wasn't as focused on his last couple of albums.  Either way he was happy he met and worked with all the artists he did during that time, including Madonna.  Who happened to be working on a new book... Additional commentary by Drip, Lionel Martin, Ralph McDaniels, Mister Cee and Little Daddy Shane
See More
Comments (2)

as a kane fan this is heaven

I need that grand master caz at the end tho where can i get that !!