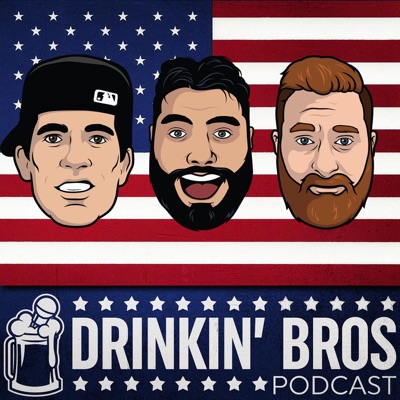 Ross Patterson, Jarred Taylor, Dan Hollaway, and friends get together every week to make sure you never drink alone... at least that's what their excuse is.
751 Episodes
Reverse

Ross Patterson and Dan Hollaway sit down with "man of the street" journalist James Klug who recently just returned from covering the Portland protests where he lived for a week straight.  The coverage of what is happening there is shocking. www.ghostbed.com/drinkinbros

Ross Patterson and Dan Hollaway welcome special guest Kerri Kasem, daughter of American radio legend Casey Kasem, as they discuss the strange and toxic circumstances around his death, the similarities between the Joe Biden and the members of her family with dementia, why everyone is afraid to talk about the real numbers behind Covid, and why Americans don't take care of their gut enough.

Ross Patterson and Dan Hollaway welcome special guest ESPN Science host John Brenkus to discuss UFO's and the recent announcement that the Pentagon would be releasing information about a vehicle found that was "not of this world".  The show gets interrupted live on air by something we've never experienced.

As Derek undergoes a test for Coronavirus, we give a never before heard episode from when he first started the show!  #prayers4derek www.ghostbed.com/drinkinbros

Ross Patterson and Dan Hollaway bring you the realest fake news of the week starting with the New York AG trying to ban the NRA, Joe Biden going off the rails in an interview, what really happened in Beirut, and why black Americans don’t want to defund the police.

Ross Patterson and Dan Hollaway welcome back special guest Dr. Frank to discuss the importance of testosterone replacement therapy (TRT), why so many men come back from fighting overseas have low testosterone levels, how you can combat it, and why your local family physicians might not be giving you the correct information that you need.  You can call the Frank Institute at 910-679-8534. www.ghostbed.com/drinkinbros

Ross Patterson and Dan Hollaway discuss the repercussions of the PAC-12's list of demands for it's college athletes, why the ratings are awful for the restart of the NBA and MLB, why the NHL is flourishing, and Ross picks the winner of the first PGA Major this weekend. www.ghostbed.com/drinkinbros www.killcliffcbd.com promo code DRINKINBROS for 20% off mybookie.com promo code DRINKINBROS doubles your deposit

Ross Patterson and Dan Hollaway have one last hurricane in their system in Wilmington, NC and Dan asks his best friend Matt Hunter of Forgotten 11s to come on the show to talk about their service together in Iraq, why you can't drop a nuclear bomb into a hurricane, and why the AC is out as people take cover.  Weird show.    www.ghostbed.com/drinkinbros   www.forgotten11s.com

Ross Patterson and Dan Hollaway sit down with SpaceX lead engineer Karl Wesson to discuss Bob and Doug’s mission to space, Elon Musk’s new internet venture Starlink which Ross hopes is $40, why he doesn’t get free Tesla’s, how no one can pronounce Elon Musk’ baby name, and his love of restoring old Landrover Defenders.

Derek Weida is joined by Owen and special guest Sean Endsley for Part 2 of their conversation from last week as he discusses getting out of the military, what it means to him, and more importantly what is next.  Powerful show.

Ross Patterson and Dan Hollaway bring you the realest fake news of the week with the media "accidentally" announcing Biden's VP choice, Zimbabwe giving reparations to white farmers, big tech faces the Senate to answer the question of why the are censoring people, why the Jump Out Boys are coming to a city near you, and how an NYC artist is in hot water for painting a Thin Blue Line on the street.

Ross Patterson and Dan Hollaway welcome special guest former Navy SEAL Rob O'Neill as they discuss his effort of helping in transitioning Veterans into life after the military through his Special Operators Transition Foundation, the pride his Dad felt when he found out Rob killed Osama Bin Laden, how Rob thinks this year's election will shake out, his friendship with Kid Rock, and his dream foursome in golf.   www.ghostbed.com/drinkinbros www.sotf.org

Ross Patterson and Dan Hollaway welcome ESPN Sports Science host John Brenkus to discuss 17 players from the Miami Marlins testing positive for Covid after opening weekend of MLB, why young teams are the ones who might win the World Series, why colleges like Ohio State might start off the season against their rivals like Michigan, and the NBA starts it's regular season in 2 days.

Ross Patterson and Dan Hollaway welcome special guest WWE Badass Eva Marie to discuss her improbable journey to wrestling’s highest stage, what it’s like being in Wrestlemania, the travel schedule of fighting in the WWE every year, the real scoop on the Bella Twins and their show on E!, and why she might come back to win the Championship belt some day.

Derek Weida is joined by Owen and special guest Sean Endsley to discuss how they met in the same Army platoon and what it was like coming into the army as an E4, he talks about his experience in SOPC, and the two recollect moments from their deployments in Iraq.   www.ghostbed.com/drinkinbros

Ross Patterson and Dan Hollaway bring you the realest fake news of the week with the suicide of the “Fedex Hitman” linked to multiple murders including the son of an Epstein prosecutor, child gangs are committing tons of crime in the south side of Chicago, gun sales are up 95% in the US, the Chinese Consulate in Houston has 2 days to pack up and leave the country, the breaking news of a judge ordering the opening of files from the original 2015 Epstein trial which will include flight tickets to Epstein Island, a new study reveals Hitler had micro penis and 1 testicle, and the two explain how the terrible mismanagement of Joe Biden’s campaign is starting to become extremely obvious.

Ross Patterson and Dan Hollaway welcome NHL junkie Zack Hird to discuss the odds and their over/unders for the NHL playoffs starting August 1st including teams such as the Golden Knights, Boston Bruins, Edmonton Oilers, Toronto Maple Leafs and others. They also talk about how NHL players are different from other sports players in that they are complete animals and will do what they need to do to get to the Stanley Cup!    mybookie.com

Ross Patterson and Dan Hollaway welcome back comedian Vincent Marcus to discuss why Chris D’Elia’s sexual misconduct might not be as severe as previously thought, Vincent tells all about his ongoing experience on America’s Got Talent and why he and Sofia Vergara might have a thing, they talk about Louis C.K.’s $7 comedy special, Chris Hemsworth will be playing Hulk Hogan in a biopic about the wrestler, and Vincent shows off his many amazing impressions of well known figures.   www.ghostbed.com/drinkinbros

this podcast is what I was waiting for and damn yall hit the spot with this one!!! love you guys! cheers

my two favorite podcasters in one this is great

You guys just keep killing it! Keep up the great work. Love it!!!

I’m so glad that you shared your story, I feel you’re sharing my story! Thank you!

you still on this alt right shit..it's 2020 its boring find a new gimmick

Story time with Tanzey needs to be a regular deal

I wanted to like this podcast. Yall need better language and more respect for women. Super duechey at times

need a episode with disgusting justin and Jared

i love the older shows . just feels like a guys version of Hollywood access mixed with some political talk anymore .

I fucking love this guy like a Thailand tranny

I love this podcast. It reminds me of some of the conversations had with my bros in the Army back in the day. Just sitting around bullshitting all day. Keep it up!

we were genetically engineered by aliens

10 minutes of ads are you fucking kidding me? makes it easy for me to unsubscribe and leave a low rating.