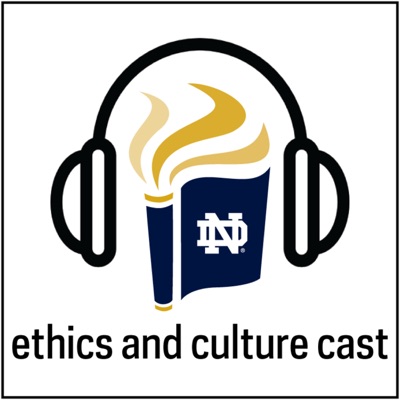 Lively conversations with professors, fellows, scholars, and friends of the University of Notre Dame's de Nicola Center for Ethics and Culture. The Center is committed to sharing the richness of the Catholic moral and intellectual tradition through teaching, research, and public engagement, at the highest level and across a range of disciplines. For more information visit http://ethicscenter.nd.edu
48 Episodes
Reverse

Fr. John Paul Kimes is an Associate Professor of the Practice at Notre Dame Law School and the Raymond of Peñafort Fellow in Canon Law at the de Nicola Center. After his undergraduate studies at Notre Dame, he studied for the priesthood at the North American College in Rome, where he earned his Licentiate in Canon Law and was ordained in 2000 for the Maronite Catholic Eparchy of Our Lady of Lebanon of Los Angeles. He subsequently earned his Doctorate in Canon Law and served for 11 years at the Vatican's Congregation for the Doctrine of the Faith. Special Guest: Fr. John Paul Kimes.

Zena Hitz was a scholar in residence at the de Nicola Center for Ethics and Culture in 2018, where she wrote the bulk of the manuscript that is now published as "Lost In Thought: The Hidden Pleasures of an Intellectual Life." Special Guest: Zena Hitz.

Episode 46: George Weigel and "The Next Pope"

In this episode, we chat once again with George Weigel, the distinguished senior fellow at the Ethics and Public Policy Center in Washington, D.C. He has written a new book, "The Next Pope: The Office of Peter and a Church in Mission (https://www.amazon.com/dp/B08BJBYHD7/)". We discuss why he wrote the book, who it's for, and how every Christian, not just the Pope, has the responsibility to introduce people to Jesus Christ. Special Guest: George Weigel.

Anja Renkes of the Notre Dame Class of 2020 was a member of the dCEC's Sorin Fellows Program. She studied Theology and Irish Studies, as well as Art, and was a member of the Notre Dame Rowing Team. We chat about her studies, her research project in Ireland visiting and documenting the Holy Wells, and the lessons she learned through her athletic training. Special Guest: Anja Renkes.

Reverend Terrence P. Ehrman, C.S.C. is chaplain to the de Nicola Center for Ethics and Culture. A native of Baltimore, Father Terry joined the Congregation of Holy Cross after earning a B.S. in biology from Notre Dame and an M.S. in biology from Virginia Tech. He was ordained in 2000 and received his Ph.D in theology from the Catholic University of America in 2012. Father Terry teaches the course "Science, Theology, and Creation" to undergraduates. His latest book is Man of God: Lessons to Young Men About Life, Sex, Friendship, Vocation, and Loving with the Heart of Christ (2017). Special Guest: Fr. Terry Ehrman, C.S.C..

Steve Barr is professor of physics and director of the Bartol Research Institute at the University of Delaware. He is the president of the Society of Catholic Scientists and author of bestselling books on science and religion such as Modern Physics and Ancient Faith (Notre Dame) and The Believing Scientist (Eerdmans). Special Guest: Steve Barr.

We chat with Therese Cory, an associate professor of Philosophy at Notre Dame and the newest member of the Pontifical Academy of St. Thomas. We talk about reading Aquinas with undergraduates, the cross-cultural conversation around Aristotle's writings, and how the thought of St. Thomas is relevant to modern-day A.I. researchers. Special Guest: Therese Cory.

Dr. Komrad is a psychiatrist on the teaching faculty of Johns Hopkins and Sheppard Pratt in Baltimore and Clinical Assistant Professor of Psychiatry at the University of Maryland and Tulane. He earned his undergraduate degree in molecular biophysics at Yale University, his M.D. degree at Duke Medical School, and trained in internal medicine and psychiatry at Johns Hopkins. He was an attending psychiatrist on the Treatment Resistant Psychotic Disorders Unit at Sheppard Pratt Hospital for 15 years, where he continues to train residents in psychotherapy and psychopharmacology. In addition to clinical psychiatry, Dr. Komrad is a medical ethicist. He chaired the Ethics Committee and ethics consultation service for the Sheppard Pratt Health System in Maryland for over 25 years. He served on the Ethics Committee of the American Psychiatric Association for 6 years, which oversees ethics and professionalism for psychiatry in the U.S. Recently he has been speaking throughout the U.S. and internationally, also consulting to government policy makers, expressing ethical concerns related to physician assisted suicide and euthanasia, especially concern that these procedures are available to people with mental illness in some countries. He speaks widely about why legalizing these procedures is neither good social policy nor good medical ethics. Special Guest: Mark Komrad, MD.

In this episode, we chat with Villanova University professor and poet James Matthew Wilson. He was with us on campus as part of our 20th Annual Fall Conference on friendship. In our conversation, we talk about the real work of writing poetry, listening to the muse, and why each of us should learn to write a bit of poetry ourselves. Special Guest: James Matthew Wilson. 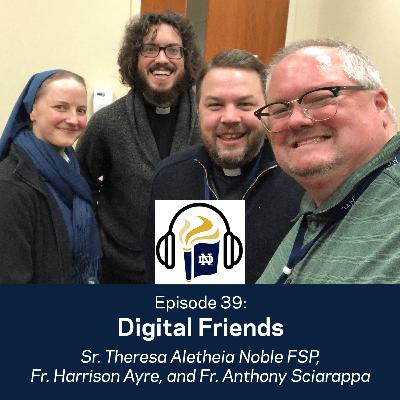 Our guests were part of a panel discussion at the dCEC's 20th Annual Fall Conference, "I Have Called You Friends." Their panel discussed "digital friendship." Video of the panel session will be posted to the Center's YouTube channel. Special Guests: Fr. Anthony Sciarappa, Fr. Harrison Ayre, and Sr. Theresa Aletheia Noble, FSP.

J. J. Wright is a composer with roots in jazz and sacred music. He is the director of the Notre Dame Folk Choir, and his gig list includes recording and performing with Caribbean Jazz Project: Afro Bop Alliance, featuring vibraphonist Dave Samuels. The album was nominated for a GRAMMY for 'Best Latin Jazz Album' and won the Latin GRAMMY in the same category. In addition to Mr. Samuels, J.J. has had the privilege of performing with Billy Hart, Ike Sturm, Nate Wood, Chris Cheek, Zach Harmon, Mark Ferber, Matt Ulery, and Delfeayo Marsalis. Special Guest: J. J. Wright.

Dale Ahlquist is the president of the Society of Gilbert Keith Chesterton and the author of five books about Chesterton, including The Complete Thinker and Common Sense 101. We chat about Chesterton's 1930 visit to Notre Dame, his interdisciplinary approach to writing, and (spoiler alert!) the meaning of The Man Who Was Thursday. Special Guest: Dale Ahlquist.

In this episode, we sit down with Arthur Brooks, the former president of the American Enterprise Institute and the author of "Love Your Enemies: How Decent People Can Save America from the Culture of Contempt." We talk about the importance of freedom of speech on college campuses, the role of American Catholics throughout history, and the importance of willing the good of the other as other. Special Guest: Arthur Brooks.

Ernest Morrell is the Coyle Professor in Literacy Education and Director of the Center for Literacy Education at the University of Notre Dame. Ernest has recently been named director of the National Council of Teachers of English (NCTE) James R. Squire Office for Policy Research in the English Language Arts. He is an elected Fellow of the American Educational Research Association, a past president of NCTE, and a co-convener of the African Diaspora International Research Network. From 2015-2019 Ernest has been annually ranked among the top 200 university-based education scholars in the RHSU Edu-Scholar Public Influence Rankings published by EdWeek. Ernest is also the recipient of the NCTE Distinguished Service Award, the Kent Williamson Leadership Award from the Conference on English Leadership, and the Divergent Award for Excellence in 21st Century Literacies . His scholarly interests include: literacy studies, the teaching of English, literature for children, critical media pedagogy, youth popular culture, and postcolonial literatures of the African Diaspora. Email Professor Morrell directly to receive a copy of his forthcoming book! Email: emorrel1@nd.edu (mailto: emorrel1@nd.edu) Special Guest: Ernest Morrell.

Martin, a systematic theologian who received her Ph.D. from Notre Dame, joined the faculty in the College of Arts and Letters in 2012. Her first book, Hans Urs von Balthasar and the Critical Appropriation of Russian Religious Thought, was one of 10 winners internationally of the 2017 Manfred Lautenschlaeger Award for Theological Promise. She is co-editor of An Apocalypse of Love: Essays in Honor of Cyril O’ Regan, and she is currently working on a second book project, tentatively titled ‘Recollecting Forwardly’: The Poetics of Tradition, that treats repetition, poetics, and theologies of history in mainly French ressourcement theology. Special Guest: Jenny Martin.

We chat with Margaret Cabaniss, the scholarly research and publications program manager for the de Nicola Center for Ethics and Culture. She oversees the Center's book series with the University of Notre Dame Press, manages the visiting scholars program, and coordinates the Notre Dame Fall Conference, the signature academic event that the Center has sponsored since its foundation in 1999. Special Guest: Margaret Cabaniss.

On April 26, 2019, we were joined by His Eminence, Timothy Cardinal Dolan, the Archbishop of New York, for a special Mass in the Basilica of the Sacred Heart as we formally dedicated the de Nicola Center for Ethics and Culture. In this episode, we share the Cardinal's homily at that Mass, in which he speaks about the mission of a great Catholic university like Notre Dame, and the role that the de Nicola Center plays in advancing that mission to share the richness of the Catholic moral and intellectual tradition. Special Guest: Timothy Cardinal Dolan.

Undergraduate students Emily Hirshorn and John Hale, along with Ph.D. candidate Fr. Justin Brophy, O.P., were part of a student pilgrimage and tour to the Holy Land sponsored by the de Nicola Center for Ethics and Culture during Spring Break 2019.