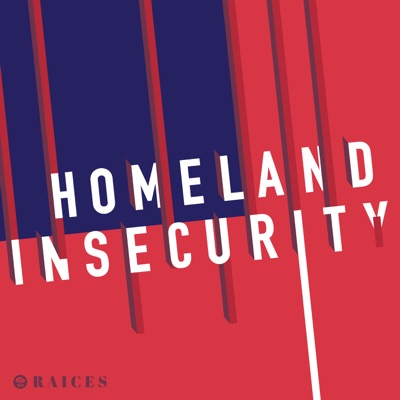 How Fear Changed America. Homeland Insecurity is a new documentary podcast from RAICES that chronicles the untold story of the Department of Homeland Security (DHS). We go back to the beginning, when our government built a powerful new agency in the wake of 9/11 to protect America from terrorists—only to use that agency to terrorize immigrants. From family separation to federal agents deployed in Portland, the scope and cruelty of DHS continues to expand, begging the question: Is anyone safe? Season 1 is hosted by civil rights leader Erika Andiola, a galvanizing voice in the fight for migrant justice.

Trailer: How did immigrants like me become the enemy?

I'm Erika Andiola: immigrant, activist, and host of the podcast Homeland Insecurity, which asks, "How did immigrants like me become the enemy?" We answer that question by investigating the unwritten history of the Department of Homeland Security. The first 4 episodes are available now. New episodes available weekly beginning September 28.

Nearly 20 years ago, Presidents George W. Bush and Vicente Fox stand side by side on the White House lawn, poised to broker a deal that would give undocumented Mexican immigrants in the US a path to becoming documented. That deal never came to pass. Days later, 9/11 forever changed the course of immigration in this country and the future for immigrants like our host Erika Andiola. Overtaken by a climate of fear, Congress and the White House created the Department of Homeland Security (DHS), a department with a vague mandate and almost unlimited resources. Join us as we trace the unwinding of US immigration policy and the dangerous consequences of increasingly unchecked powers of government.

On the heels of 9/11, early warning signs indicate that the US is changing its approach to immigration. Congress approves a hiring spree at DHS’s newly-created Customs and Border Protection (CBP), doubling the size of Border Patrol forces by 2010. CBP quickly becomes the largest law enforcement agency in the country—and the most corrupt. The impact: dire consequences for immigrants.

In addition to staffing CBP, the federal government begins to expand immigration detention, with a mandate to add 34,000 beds in 4 years. Join us as we visit several of the Texas detention centers launched during this period. Learn how the Bush administration expanded the detention system, contracting with private companies and allowing profit motives to guide immigration policy. And hear from Cecyll Padilla, who turned himself in only to be detained.

As power switches hands from Republican to Democratic leadership in 2009, the nation holds its breath, hoping President Barack Obama will fix an immigration system that has become both unfair and unwieldy. Instead, hope turns to dismay as the new administration champions the Secure Communities program, expanding the reach of ICE through local law enforcement and creating a chilling effect on immigrants’ abilities to report crimes. Hear about one such case involving a child predator working at an elementary school in Los Angeles –– and the undocumented families of the victims who were afraid to come forward. Host Erika Andiola also shares the deeply personal impact that these policies had on her family life. Discover how a program that promised “secure communities,” in fact accomplished the opposite, making everyone more unsafe in the process.

The Obama administration builds bigger and bigger jails to lock up families and labels moms and their children national security threats. President Obama’s legacy on immigration sets the stage for President Trump’s crackdown on immigration.

Episode 6: They Separated You From Me

When the Trump administration gets ahold of DHS, they implement a new, horrific policy: Family Separation. Parents and children who present themselves at the border to request asylum are torn apart. In this episode, we follow the story of Luz, a mother who comes to the U.S. with her two daughters Clarita and Isabel. They flee violence in Guatemala only to endure the agony of months-long separation.

What happens when a dangerous immigration policy collides with a global pandemic? "Remain in Mexico," the Trump administration’s 2019 policy to deter immigrants from coming into the U.S., sets the stage for the spread of COVID-19 across borders. We investigate how DHS doubles down on plans to abolish immigration to the U.S. even when the coronavirus looms—sickness and death be damned.

Episode 8: We All Become the Enemy

In June 2020, DHS descends on nationwide protests for racial justice and throws Portland demonstrators into unmarked vans. DHS was supposed to protect us from terrorist attacks, only to be weaponized against immigrants. Now it is being deployed against U.S. citizens exercising their right to protest. Just how far will this go?
See More
Comments (11)

... I mean, I understood the value of fear on a large scale. In regards to war and Military budgets, and related defense spending. But I had not thought about how fear is such a money making device all the way down. It pervades our culture.

wow. This is an eye-opener. I had not thought about how fear is a commodity. this explains so much. about immigration, and about so much else.

I have a crazy idea. One thing that would help border problems, is uplifting Mexico. To begin with, decriminalizing drugs... Therefore reducing the influence of organized crime. then, find ways to stimulate the economy, reducing the desire to migrate to the US. the only losers with this program would be violent criminals, and owners of private prisons.

I was born here in the USA, and I am of Western European descent. You have nothing but love from me.

apparently, the attack on 9/11 was highly successful. The repercussions have virtually destroyed what America Used to Be. the terrorists gave us Trump indirectly.

If you are here illegally you are a criminal. You do not belong here in our country. Follow the immigration policy's set forth for all immigrants. If citizens of the United States commit a felony and they have children they become wards of the state. That means they're separated from their families. Stop whining about your immigration status and become a citizen of the USA

Excellent podcast!!! I learned so much more about ICE detaining Dreamers, immigrants, & undocumented immigrants. How ICE is making unilateral decisions to deny renewals for no reason, arresting, & detaining these people, & deporting them to countries without their consent where they know no one nor speak the language.