Irish Stew, the podcast for the Global Irish Nation featuring interviews with fascinating influencers proud of their Irish Edge. If you're Irish born or hyphenated Irish, this is the podcast that brings all the Irish together Listen Notes
13 Episodes
Reverse

From when her mother gave her a book of James Thurber’s cartoons, Liza Donnelly has expressed her wit and rising political consciousness through pencils, pens, watercolors, and now through her live drawing on an iPad at the Oscars, the Democratic National Convention, other marquee events for CBS.On this episode, Liza traces her journey from Washington, D.C. to New York, with an impactful year-long layover in Rome, where she explored a new sense of freedom and immersed herself in the arts, especially the drawings of Leonardo Da Vinci.In New York she used her artistic skills behind the scenes at the American Museum of Natural History. But her goal always was to get her cartoons in The New Yorker which she did through dogged determination despite all the rejections—but she’ll tell why she needed to go out on the streets of New York to sketch parking meters before the magazine published her first cartoon.Liza reveals how the assassination of Dr. Martin Luther King, Jr. sparked her growing political consciousness and why she saw her art as the best way to add her voice to the cause.While it was in New York that Liza began to feel Irish, that feeling intensified in her first trip to Ireland where she found a warm welcome, new inspirations for sketching, and a kinship with the people from a shared passion for politics and love of poetry—because for Liza Donnelly cartooning is a form of poetry.

Viewing life as “something of a random walk,” Ted Smyth went from rural to urban, to international, from leadership roles in diplomacy to C-suite roles in Fortune 500 companies, to a rich post-corporate career in Irish American community leadership.On this episode of Irish Stew, Ted describes his journey from a protestant farming community in Co. Westmeath, to “finding his place” in Trinity College Dublin, an intellectual “petri dish” that fostered his growing social justice focus. That led him to Ireland’s diplomatic corps and his work on conflict resolution in Northern Ireland and Irish America engagement in the peace process.Settling stateside, he forged an enviable business career instilled with his social responsibility ethos and is now in his “Act III,” he serves the Global Irish Nation through his writing, speaking, and volunteer service, including his roles as president of the advisory boards of both Glucksman Ireland House and UCD Clinton Institute.

Shaunagh Connaire is an award winning journalist who has reported from some of the most challenging and troubled spots on the globe. In her most recent venture, a podcast called Media Tribe, she has shifted her focus towards highlighting the work of critically acclaimed journalists and media executives, providing a forum to tell the story behind the storyShaunagh will be Irish Stew's guest on the first episode of season 2. For more on Irish Stew, please visit: https://www.irishstewpodcast.com

Ruth Cannon BL is a Dublin based barrister specializing in property and probate law. Ruth acts as a guide in giving  an introduction to both the the esoterica and arcane that constitutes the Irish Legal profession and it's history on this episode. Together with cohosts John Lee and Martin Nutty, Ruth details the state of the Irish Law and why this third decade of the 21st century is an exciting time for the profession especially as the impact of Brexit is felt. We also discuss some of the extensive content Ruth has been published on her blog: Stories of the Four Courts which features tales of pioneering barristers, duels to the death and even a ghost story

Alison McKenna shares tales from acting on the stages of the Abbey, Gate, and Royal Shakespeare Company, traces her journey as a producer for the theatre and cultural programming such as New York’s centerpiece 1916 Centenary commemoration, and demonstrates why she’s an in-demand voiceover artist in the burgeoning field of audiobooks. Along the way she tells us why tap dancing’s loss was acting’s gain, how fitting into a particular costume was the opportunity she needed to win her first role at the Gate, the cheeky comment that helped her land a part at London’s National Theatre, how Hozier ended up performing at one of her events, and why Ireland needs to embrace its “culture makers,” now, more than ever.  Learn more about Alison McKenna at http://alison-mckenna.comThanks for listening and we welcome your comments and reviews at: https://www.irishstewpodcast.com

For 10 years, Damian Shiels has mined the American Civil War pension files to tell the staggering story of Irish participation in that conflict. This archive is the richest source of early 19th century Irish social history. John Lee and Martin Nutty talk with Damian about his herculean work, his love of history and how that fits with his career in archaeology.  For more on Damian's work visit his amazing blog at: https://irishamericancivilwar.comDon't forget to subscribe to Irish Stew Podcast on your favorite podcast platform and you can visit www.IrishStewPodcast.com to get the latest on our work and provide feedback on our efforts.

Ciarán Cannon is the elected TD (Irish Member of Parliament aka  Dáil Éireann) for the Galway East constituency. Ciarán served as Minister of State for the Diaspora and International Development from 2017 - 2020. John Lee and Martin Nutty talk with Ciarán about the importance of the Diaspora to Ireland, the Irish word: Meitheal, the difficult decisions that elected officials are sometimes called upon to make and Ciarán's abiding interest in music.Please feel free to leave comments on this episode on the associated episode page at www.IrishStewPodcast.com

Geoff Cobb is a New York City school teacher, a blogger, a columnist and a historian with a focus on the lesser recorded histories of the personalities and neighborhoods that constitute the seething ferment that is New York City. Our conversation  focuses on Geoff's upcoming book detailing the lives of Irish New Yorkers who left a mark on the city and the state.

Aisling MacRunnels came to America on an athletic scholarship in the 1980s. Hear Aisling's story detailing the windy route taken to the upper tiers of the Silicon Valley hierarchy. Learn how Aisling leveraged her Irish EQ to achieve success in America's tech land.

Jeffrey Hayzlett is a former Fortune 100 C-Suite executive turned C-Suite Network CEO, keynote speaker, media entrepreneur, and TV & podcast host. We talk about what drives him in business, his ringside seat for the demise of Kodak, what he really thinks of Donald Trump after working with him on The Apprentice, his reasons for living in South Dakota, and why his first visit to Ireland meant so much to him.

Bill Schultz,  Executive VP/Content Development at Cadence13, has had a career spanning more than 30 years in the radio and podcast world. Our conversation delves into the fast changing podcasting industry and how the most creative people in the audio arts are gravitating towards this space

Canadian by birth, New Yorker by choice, Bridget Bray recounts her genealogical journey from avocation to profession as she blows the dust off the topic with her insights on internet and DNA research, how she followed leads and knocked on doors in Ireland, why dog licenses are one of her workarounds for information gaps, and her tips on how to break through the frustrating genealogical “brick walls. 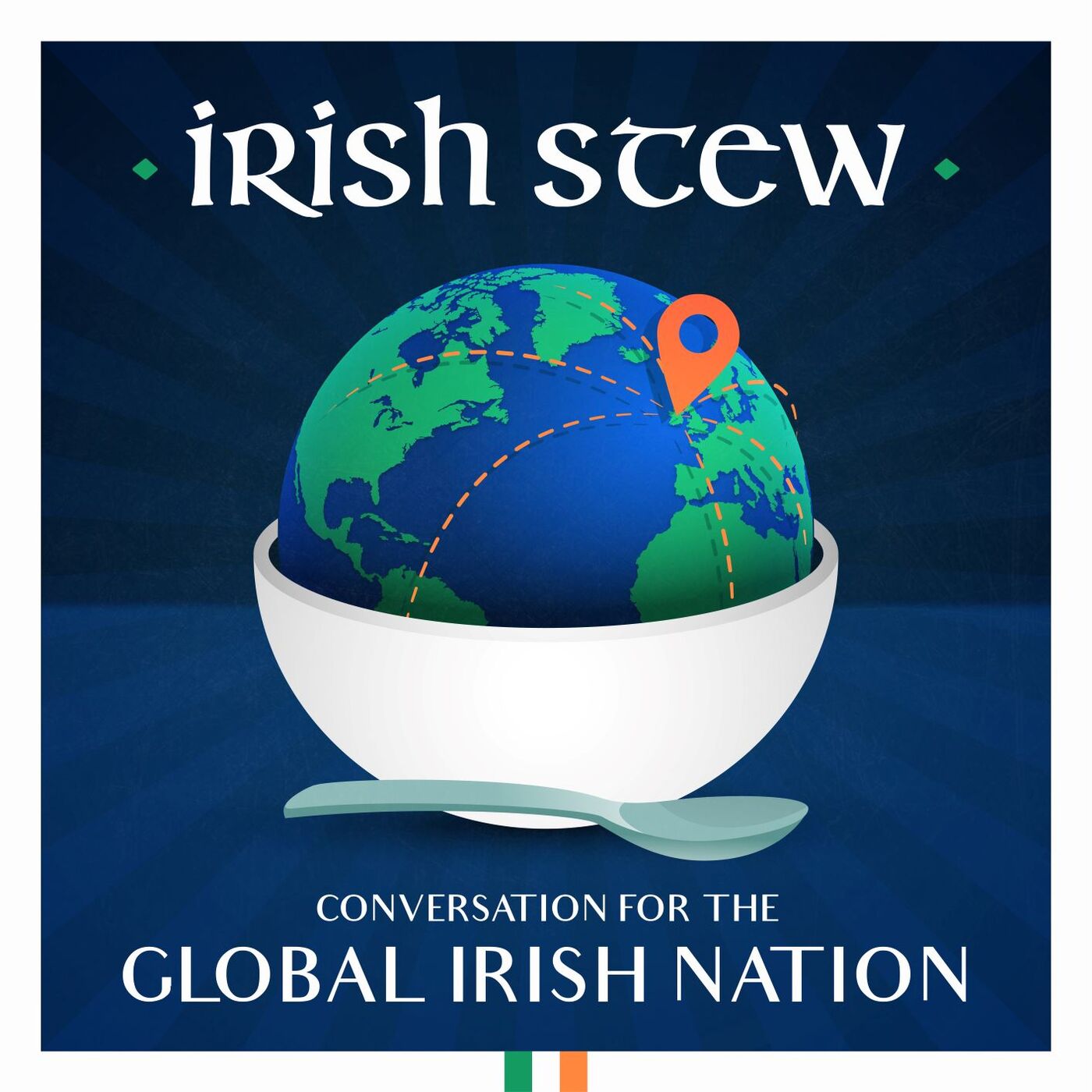 Preview of Irish Stew the podcast for the Global Irish Nation featuring interviews with fascinating influencers proud of their Irish Edge. If you're Irish born or hyphenated Irish, this is the podcast that brings all the Irish together
See More
Comments (1)

Hi Martin, loved the podcast and you were brilliant with the interview..... Well rounded and loved how chance meeting at JFK such an irish thing...... Well done Aisling in finding niche market and leading the way 👏👏. Irish people will always get on and as the saying goes "if you first dont succeed try try again" Love the Irish stew podcast and keep up the good work Martin👍👍