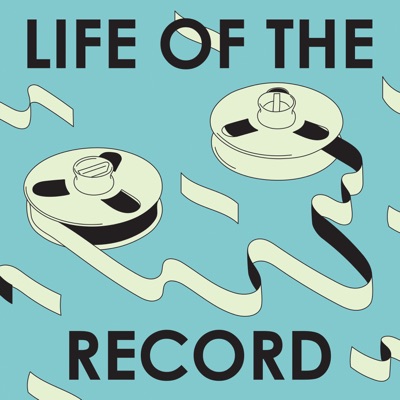 Life of the Record

Author: Life of the Record

© Life of the Record

Classic albums, told by the people who made them.
14 Episodes
Reverse 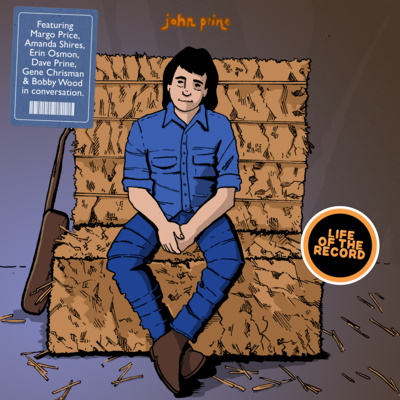 For the 50th anniversary of John Prine’s debut album, we take a detailed look at the extraordinary circumstances of how this record came to be. In this episode, John’s older brother, Dave Prine, describes the shocking moment when he realized his brother’s staggering talent. Erin Osmon, author of the forthcoming 33 1/3 book about this album, takes us through John’s discovery story and how he first made an impact at folk clubs in Chicago before being discovered by Kris Kristofferson and Jerry Wexler. We’ll hear about the unlikely pairing of Prine with legendary Atlantic producer, Arif Mardin, and session players, the Memphis Boys, who had never made a folk record before. Keyboardist, Bobby Wood, and drummer, Gene Chrisman, of the Memphis Boys, discuss what it was like to record these songs at American Sound Studio with a very nervous and inexperienced young performer. Additionally, we’ll hear from another generation of Nashville songwriters and Prine collaborators, Margo Price and Amanda Shires, who describe why many of the songs from this record have become standards. From Prine’s wry sense of humor to his ability to write characters to covertly writing about controversial subjects to his deep empathy, we’ll hear the stories around how this record came together and why it ended up becoming one of Prine’s most enduring works. 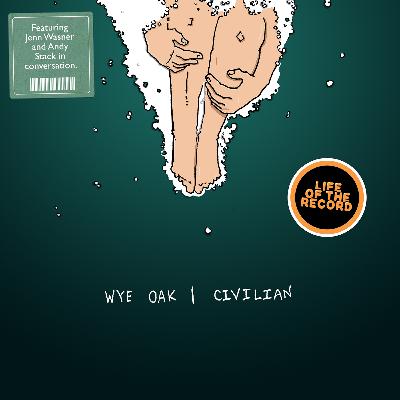 In celebration of the 10th anniversary, Jenn Wasner and Andy Stack reflect on the writing and recording of the third Wye Oak album, CIVILIAN. In this episode, they describe this intense period as a young band when they were taking every touring opportunity available and were getting burnt out by working constantly. For CIVILIAN, they were moving out of their comfort zone with recording as they sought help beyond their tight knit Baltimore community and went to Dallas to have the record mixed by John Congleton. On a personal level, Jenn talks about the panic attacks she was experiencing along with a sense of shame that she was feeling in response to her music career taking off, distancing her from the people she loved. In addition, Jenn and Andy talk about a key romantic relationship that was ending, which greatly informed the songwriting for this record. From ominous energy in Dallas to questioning religion and long-term relationships to capturing the right guitar solo to making beautiful ugliness, we’ll hear the stories around how the record came together.

The Making of THE SOPHTWARE SLUMP by Grandaddy - featuring Jason Lytle

In this episode, Jason Lytle reflects on the process of making Grandaddy's second album, THE SOPHTWARE SLUMP. Jason talks about being "a man with a mission" while holing up in a farmhouse outside of their hometown of Modesto, California and tracking and mixing nearly everything himself. During this era when bands were starting to record themselves, Jason describes how he was obsessively buying gear and learning the craft of recording while being inspired to experiment after hearing Radiohead's OK COMPUTER. Since Grandaddy had signed with major label, V2, prior to the making of the record, Jason describes the pressure he felt as the band was gaining popularity and the curse of the sophomore slump lingered. From writing cautionary tales, sci-fi epics and songs about drinking and failed relationships to sending a joke version of the album to the label to sharing a stage with Elliott Smith, we'll hear the stories around how the record came together.

The Making of MOUNT EERIE by the Microphones - featuring Phil Elverum

In this episode, Phil Elverum reflects on the experience of making MOUNT EERIE, the last album made under the Microphones name before adopting Mount Eerie as his project name. Phil gets into the process of taking a different approach from his previous album, THE GLOW PT. 2, and conceiving of a theatrical story about death and transformation. As his final album recorded in Olympia, Phil talks about embracing collaboration and enlisting friends from the Pacific Northwest music scene, including Mirah Zeitlyn, Khaela Maricich, Kyle Field, Karl Blau and Calvin Johnson to take on the roles of different characters. From the initial inspiration of driving around in Florida shortly after September 11th happened, to the difficulties of solo recording a 10-minute samba drum section to tape to taking inspiration from artists like Sade, Bjork and Timbaland to the young person’s search for meaning, we’ll hear the stories around how the record came together.

For the 20th anniversary, Mimi Parker and Alan Sparhawk reflect on the making of the classic Low album, THINGS WE LOST IN THE FIRE. After Low had made several records in their signature slow and minimal style, they were beginning to expand their sound while recognizing the possibilities of the studio. For THINGS WE LOST IN THE FIRE, Low took their time recording with Steve Albini in Chicago and later enhancing the recordings with Tom Herbers in Minneapolis. The recordings represented a turning point for the band as they built the songs up more than they had in the past with guest musicians, lush string arrangements, layered harmonies and keyboard textures. Mimi Parker and Alan Sparhawk’s songwriting in this period was heavily influenced by the birth of their first child, Hollis, who also makes an appearance on the record. From writing mournful songs about the cycle of life to figuring out how to translate parts to string players to studying the original innovators in the studio, we’ll hear the stories around how the record came together.

In this episode, Kyle Field reflects on the experience of making LIGHT GREEN LEAVES, Little Wings’ second album for K Records. Kyle gets into the process of conceiving of a record about the fall and ambitiously deciding to make three completely different versions of the album for three different formats. As Kyle reflects on the writing and recording of each song from the album, we’ll hear a detailed look at his creative process. From moving to the Pacific Northwest on a quest, to living in a house full of musicians in Portland, to being nostalgic for the Central Coast of California, to making the decision to try and make it as an artist, we’ll hear the stories around how LIGHT GREEN LEAVES came together.

The Making of ONE MISSISSIPPI - featuring Brendan Benson

For the 25th Anniversary, Brendan Benson looks back on the process of making his debut album, ONE MISSISSIPPI.  In this episode, Brendan Benson reflects on the experience of unexpectedly being signed to a major label at a young age and all of the pressures that came along with that. After initially recording 4-track cassette demos with Jason Falkner, Brendan takes us through the process of making the record in New Orleans, controversially scrapping it, and then remaking the record again in San Francisco with a new band and a young Ethan Johns as the producer. From the competitive songwriter scene in Los Angeles, to touring with no experience as a frontman, to falling in love while having to work a record, we’ll hear the stories around how ONE MISSISSIPPI came together.

In celebration of the PLEASED TO MEET ME Deluxe Edition, we look back at the unique circumstances around how the record was created.  Bob Mehr, author of Trouble Boys: The True Story of the Replacements, offers a detailed perspective of this uncertain period when the Replacements entered Ardent Studios after splitting with guitarist Bob Stinson. Luther Dickinson, son of the late producer, Jim Dickinson, reflects on his father’s contribution to the album, as well as his own experience of joining the band in the studio as a teenager. Additionally, we’ll hear from Paul Westerberg himself, in a 1987 Warner Bros. interview with Julie Panebianco, where he shares his thoughts on the writing and recording of PLEASED TO MEET ME.  From alcohol-fueled and trick-filled sessions in Memphis to the controversy of using horns and strings to the existential conflict of being an underground rock band in a major label world, the episode offers a unique look at this pivotal moment in the Replacements’ history.

For the 25th Anniversary, Elliott Smith’s friends and collaborators, including Larry Crane, JJ Gonson, Tony Lash, Slim Moon and Leslie Uppinghouse, offer a unique oral history of how the Self-Titled record was created. With many new details that have never been heard before, Tony Lash and Leslie Uppinghouse describe the DIY processes that Elliott used while recording songs at their homes. From Elliott teaching himself how to play cello, to using cracked and out of tune guitars, to calling family members for help remembering lyrics, you’ll hear stories about how the album came together. Larry Crane, JJ Gonson and Slim Moon also reflect on where Elliott was at during this period, when the Self-Titled record ended up becoming a turning point in his solo career.

The Making of PENTHOUSE by Luna - featuring Dean Wareham

For the 25th Anniversary, Dean Wareham looks back on the process of making Luna’s third record, PENTHOUSE.  In this episode, Dean Wareham reflects on recording at Sorcerer Studios in New York City with engineer Mario Salvati and producer Pat McCarthy. Dean Wareham gets into the process of pushing for better performances, major label pressure, the grunge era and working with Tom Verlaine.

For the 15th Anniversary, Jolie Holland looks back on her first studio album, ESCONDIDA. In this episode, Jolie Holland reflects on recording in the redwoods with Lemon DeGeorge and her band of San Francisco musicians. Jolie Holland gets into the process of going from the lo-fi aesthetics of Catalpa to the studio environment and finding new fans like Bob Dylan and Daniel Lanois along the way.

The Making of BOWS & ARROWS by The Walkmen - featuring Paul Maroon, Walter Martin and Peter Bauer

For the 15th Anniversary, Paul Maroon, Walter Martin and Peter Bauer look back on writing, recording and touring the classic Walkmen record, BOWS & ARROWS. In this episode, members of The Walkmen reflect on recording in the south during a hurricane, opening for Incubus after 9/11, a tiger balm incident with Hamilton Leithauser, and the contentious process behind their biggest song, "The Rat."

For the 20th Anniversary, Kjartan Sveinsson of Sigur Rós looks back on the writing and recording of their breakthrough album, ÁGÆTIS BYRJUN. In this episode, Kjartan Sveinsson reflects on being an undiscovered, ambitious band in Iceland, working day jobs while recording at night, finding inspiration in broken equipment and rudimentary software, and repurposing bass riffs from Nirvana. 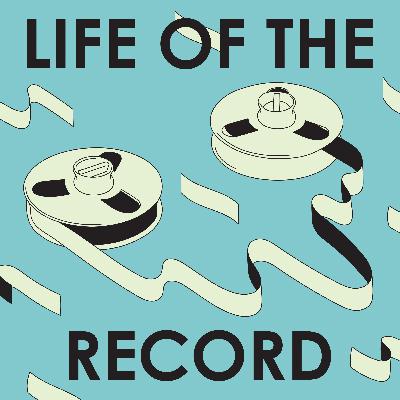 Life of the Record - A podcast where artists look back on the making of a classic album. Featuring Sigur Rós, The Walkmen, Jolie Holland and more.
See More
Comments