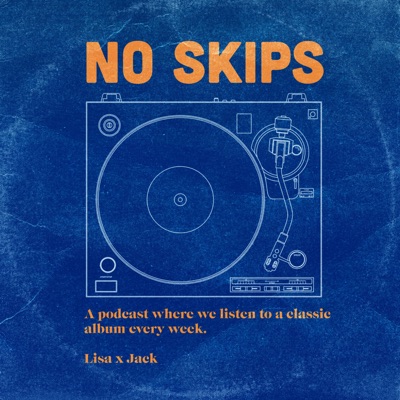 A habitual song-skipper and her music-fiend husband casually listen to and discuss some of the most iconic albums of all time. New episodes released weekly.
21 Episodes
Reverse

Up this week is Big Brother and the Holding Company featuring Janis Joplin’s “Cheap Thrills.” A big title for a big album. The intensity of this band paired with Janis’ vocals is incredible and absolutely worth giving an in-depth listen to. Listen to this episode to hear our hot takes on this absolutely raucous album.

The Beatles had an amazing run chock full of incredible albums and songs, and this week we are covering their iconic “Abbey Road” album. With several mega hits like "Come Together" and "Here Comes the Sun," this album is one everybody should know (whether or not Lisa likes it).

We are covering a quieter but still unique album this week - Air's debut album "Moon Safari." It dropped in 1998 and helped lead the way for other downtempo artists, as well. Full of quirky and unique melodies, definitely worth listening to.

This week we are covering Led Zeppelin's monster of a fourth album. With songs like "Stairway to Heaven" and "Black Dog," this album is undeniably incredible. If you didn't go through a Led Zeppelin phase, the time is now!

We are covering one of the most influential hip hop albums of the 90s (and of all time) this week on No Skips! Wu-Tang Clan's 1993 debut album "Enter the Wu-Tang (36 Chambers)" was on repeat this past week. Listen now to hear how this amazing lineup of rappers paved the way for rap to take over in the 90s.

We cover one of the most amazing jazz singers on this week's episode - Billie Holiday's "Lady in Satin." A heart-breaking but beautiful album at the end of her career and life. An absolutely amazing album by a truly one-of-a-kind musician. Give it a listen!

Don't mind us, we're just covering the greatest album of all time this week on No Skips! Michael Jackson's "Thriller" has sold 66 million copies worldwide and features some of his absolute best songs, period. Listen in as we discuss this mammoth album!

We are going our own way this week and covering Fleetwood Mac's 1977 magnum opus "Rumors." Lots of interpersonal relationship issues boil over with the band and the result is this really creative and beautiful album. Listen now to hear what we thought!

This week Lisa and Jack are sampling DJ Shadow's groundbreaking album "Endtroducing." This album is a masterpiece made up of almost entirely of samples and influenced so many of the artists we both love today. Give it a listen or go on our super secret side quest mentioned in this episode. ;)

We are back after a quick week off and are here to tackle Nirvana's second studio album, "Nevermind." Full of some of their biggest hits, this album is undeniably iconic. But did we like it? Listen and find out!

We are tackling an iconic electronic album this week on No Skips: Kraftwerk's 1977 hit "Trans Europe Express." The album was truly monumental for the electronic genre. If you're not familiar, this is definitely one to check out! Also, we are taking a one-week break from the show for spring break and will be back in two weeks with a big, big album. See you then!

This week we are tackling Kanye West's 2010 mega-hit "My Beautiful Dark Twisted Fantasy." Every track on here is big enough to basically be a single of its own. From "All of the Lights" to "Runaway" to "Lost in the World," this album 100% owns. Listen now!

After a week of no power or water and freezing temperatures in Texas, we are back to finish up the second disc from "Mellon Collie and the Infinite Sadness!" What a finale to this giant album. Lots of gigantic laughs and a lot of fun in this episode. We are back to our regularly scheduled programming - see you next week!

We are tackling The Smashing Pumpkin's 1995 mega hit of "Mellon Collie and the Infinite Sadness." Because it's a huge two-disc album with 28 tracks, we are breaking the review into two episodes. This week we cover the first disc titled "Dawn to Dusk" which featured many of the album's singles including "Tonight, Tonight," "Zero," and "Bullet with Butterfly Wings." Disc two is up next week. Listen now!

On this week's episode we cover one of Jack's all-time favorite singers, Neko Case. "Fox Confessor Brings the Flood" was dropped in 2006 - how does it hold up to a 2021 listen by Lisa? Listen to find out!

Episode 5: Pink Floyd - Dark Side of the Moon

We are throwing it back to one of the most undeniably amazing albums of all time. This week we are covering the one and only "Dark Side of the Moon" by Pink Floyd. Released in 1973 and yet it still hit the Billboard Top 200 in 2020. Just amazing. Listen now!

This week we are taking on the queen of neo-soul, Erykah Badu and her debut album "Baduizm." This album is a force to be reckoned with! Listen as we discuss one of the most soulful albums of the 90s in its entirety. Share your thoughts on the album and the episode with us on Twitter @noskipspodcast and on Facebook.com/groups/noskips.

This week Lisa and Jack take on an incredibly influential album, "Pet Sounds" by the Beach Boys. God only knows what we thought of this album. ;) Listen now to hear our thoughts and epiphanies, and feel free to share your thoughts with us on social media! We are on Twitter @noskipspodcast and on Facebook.com/groups/noskips.

Dearly beloved! We are here this week to tackle Prince's most famous album, "Purple Rain." This one Lisa at least knew of the hits - sort of- and Jack's appreciation of Prince only grew even more. Join us as we discuss the album from the insanity of "Darling NIkki" all the way to the undeniable powerhouse that was "Purple Rain." Want to connect with Lisa and Jack? Follow the show on Twitter at @NoSkipsPodcast and on Facebook in our No Skips Podcast group. Cheers!

On the first episode of No Skips, Jack and Lisa take on Radiohead's critically acclaimed "Kid A" album. This is one Jack knows very well, but one that Lisa definitely does not (despite calling herself a Radiohead fan). Join in as we discuss this magical album, all of Jack's personal memories of its release, and Lisa describing "The National Anthem" as "a chaotic farty saxophone."
See More
Comments