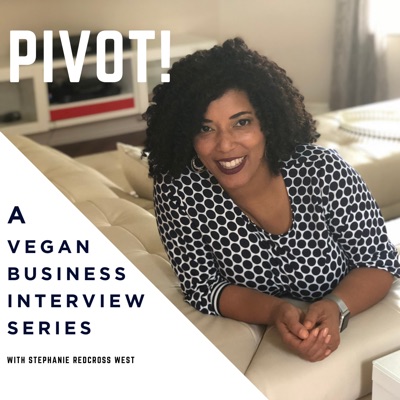 We live in fast-paced times, and in an ever-changing marketplace business owners must be able to adapt readily. The Pivot podcast, hosted by Stephanie Redcross West, features interviews with successful vegan business owners, keeping you up-to-date on topical issues & how the pros are handling them.
11 Episodes
Reverse

Meet Our Guest: Nora Kramer Youth Empowered Action (YEA) Camp is a summer camp for social change that has been training aspiring activists to make a bigger difference since 2009. YEA Camp runs weeklong overnight leadership camps for progressive teens and tweens to build their knowledge, skills, confidence, and community to make a bigger impact on the social justice issues of their choice. In alignmnent with the camp's values of respecting people, animals, and the planet, all the food at YEA Camp is vegan. YEA Campers have gone on to do amazing things, like getting Meatless Mondays in their schools, doing voter registration drives and even getting a new polling place added at their college campus, raising thousands of dollars for great causes, organizing protests and climate strikes, and lots more. http://www.yeacamp.org/ Subscribe to Pivot! A Vegan Business Interview Series on Soundwise

Meet Our Guest:Courtney Garza is a passionate vegan that brings her love for journalism, creativity, helping local businesses, and animals altogether with her compassionate social media agency that she co-founded with her business partner Christina Bluford, Sprinkles Creative to aid businesses with their branding strategy. Courtney also owns and operates VEGWORLD Magazine, an international vegan lifestyle publication, as the Editor-in-Chief to curate and promote plant-based stories from vegan products, services, and individuals from all walks of life.http://vegworldmag.com/ Subscribe to Pivot! A Vegan Business Interview Series on Soundwise

Meet Our Guest: Sherimane Johnson is a Vegan Chef, owner of two vegan eateries (Night Owl Vegan & NaturallySweet Desserts) and certified Vegan Nutrition Coach who specializes in helping her clients attain their goals of adopting a vegan approach to eating and life.  Having overcome the life-altering impacts of Type 2 diabetes with a plant-based diet and vegan approach to life, her results encouraged the creation of products and services to help others do the same.  Today Sherimane offers individual coaching and virtual cooking classes while her vegan eateries provide weekly meal delivery service. https://nightowlvegan.com/ https://naturallysweetdesserts.com/ Subscribe to Pivot! A Vegan Business Interview Series on Soundwise

Meet Our Guest: Juan Bautista Piqué The company "Un Mundo Vegano" ("One Vegan World" in spanish) starts as a response to make it easy for people to experience veganism in latin america. Juan Bautista Piqué, founder, was a heavy meat eater and one day changed his diet (after feeling much better physically and emotionally without eating meat), but without knowing "how to do it". Un Mundo Vegano helps people experience veganism in three areas: #1 - Information and Education: through online courses and "one on one" assessments / #2 - Products: informing of vegan products and soon distributing also products / #3 - Places: informing people of places to eat a delicious vegan meal. http://unmundovegano.com/ Subscribe to Pivot! A Vegan Business Interview Series on Soundwise

Meet Our Guest: Cindy wants you to be Trimazing—three times better than amazing! After improving her health and fitness through plant-based nutrition, losing 60 pounds and becoming an adult-onset athlete, she retired from her 20-year firefighting career to help people just like you. She works with people and organizations so they can reach their health and wellness goals. Our health and wellness is closely tied to the health of our environment. Cindy incorporates zero-waste and sustainable practices throughout her programs. You’ll see it IS easy being green! Cindy Thompson is a certified Health Coach, Vegan Lifestyle Coach and Educator, Fitness Nutrition Specialist, and Firefighter Peer Fitness Trainer. She is a Food for Life Instructor with the Physicians Committee for Responsible Medicine and Rouxbe Plant-Based Professional, teaching people how to prepare delicious, satisfying, and health-promoting meals. You can find Cindy at Trimazing! Health & Lifestyle Coaching Additional info about classes/COVID-19 response: https://trimazing.com/events/ Subscribe to Pivot! A Vegan Business Interview Series on Soundwise

MEET OUR GUEST:Vegannoying chronicles the tasty, rapidly growing vegan food opportunities through sharing photos, podcasts, and articles. From nutrition to “becoming vegan” to “How can my restaurant/cafe offer more plant-based options?” Vegannoying provides content, discussion, and targeted consulting for virtually all personal and professional vegan matters. Subscribe to Pivot! A Vegan Business Interview Series on Soundwise

Meet Our Guest:Diana Edelman is the founder of Vegans, Baby, whose mission is to make vegan life easier, and vegan dining more approachable and attainable. She does this through Vegansbaby.com, which serves as the definitive guide to vegan dining in Las Vegas; a vegan guidebook to Las Vegas; organizing a vegan dining month in Las Vegas which has recently expanded to other cities; curated events and chef-driven dinners; hosting local and international tours taking people on culinary vacations (her Las Vegas tour was named as one of the top vegan tours in the world by Travel + Leisure); and a new podcast -- The Good Fork -- talking to leaders in the plant-based movement. Diana is a partner with the James Beard Foundation and Life is Beautiful, curating vegan dinners and activiations. She also provides consulting to restaurants who want to expand their plant-based offerings and audience, as well as private coaching to businesses.https://vegansbaby.com/ Subscribe to Pivot! A Vegan Business Interview Series on Soundwise

Meet Our Guest--> Kirti YadavI am a Clean Eating Evangelist and have already inspired 3500+ people across India. I love to share one simple mantra " Eat Right, KuKClean" and you will see all the problems disappearing. It's actually that simple.I lost 27 kgs of Weight which inspired me to start "KUKCLEAN" so that I could help not only women but also men who are struggling with sedentary lifestyle disorders where weight loss is the most important issue.While I was losing weight, I started my first startup "Plattershare" and learned the meaning of the word "STARTUP" for the first time. I learned one more thing that motherhood should not be treated as a career break but a search for that career which you wanted to do.Motherhood taught me to run a business, run a family, and nurture a soul with healthy food and upbringing.So at KuKClean, My second startup, I promote and spread health via Eating right Program to Corporates, schools, and colleges and I am on a mission to build a healthy next generation and change our generation. https://kukclean.com/ Subscribe to Pivot! A Vegan Business Interview Series on Soundwise

Meet Our Guest--> “The Content Doctor” Sandra Nomoto is the Managing Editor of TruHavn, an online magazine on the science and benefits of plants and fungi. After earning her university degree, she worked in the public relations industry for 13 years. During that time, she launched Conscious Public Relations Inc. at the age of 25. Over the 10 years in business, Nomoto was awarded the 2009 Volunteer of the Year by Women In Film & Television Vancouver, earned B Corporation® certification, and contributed to eWomenNetwork Vancouver earning the Best Social Media and Community Engagement Award. She was a founding member of the Vancouver Short Film Festival, which she helped grow from 2005 to 2015. Nomoto authored The Only Public Relations Guide You’ll Ever Need in 2019, blogs on vegan lifestyle at SandraNomoto.com and for Cold Tea Collective, and serves on the board of the Vancouver Mural Festival.Website: thecontentdoctor.co Subscribe to Pivot! A Vegan Business Interview Series on Soundwise

Meet Our Guest---> Sachin A. Shah, PharmD, FAHA, is CEO of VeganMed and dedicated to creating a world where medications, supplements and cosmetics contain no animal-derived ingredients. As a pharmacist and research scientist, he has published over 50 scientific papers which have generated over 1 billion media impressions in outlets such as NPR, BBC News, and USA Today. He is a former TEDx speaker on “managing the mind” and enjoys nature hikes with friends. -------------------------- VeganMed, Inc aspires to create a world where medications, dietary supplements and cosmetics do not contain any animal-derived ingredients. For manufacturers, they offer the only proprietary “animal-free” certification program that incorporates lab testing. For consumers, they host a marketplace allowing worry-free shopping of independently verified animal-free over-the-counter products, and individualized, custom made animal-free prescription products. https://www.veganmed.org/ Subscribe to Pivot! A Vegan Business Interview Series on Soundwise