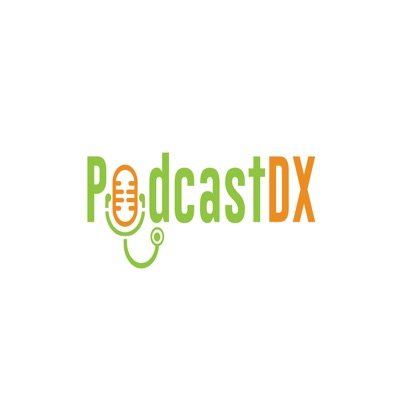 PodcastDX is an interview based podcast series in a “peer-to-peer supportive format."

We have found that many people are looking for a platform, a way to share their voice and the story that their health journey has created. Each one is unique since even with the same diagnosis, symptoms and the way each person will react to a diagnosis, is different. Sharing what they have experienced and overcome is a powerful way our guests can teach others with similar ailments.

Many of our guests are engaging in self-advocacy while navigating a health condition, many are complex and without a road-map to guide them along their journey they have developed their own. Sharing stories may help others avoid delays in diagnosis or treatment or just give hope to others that are listening. Sharing is empowering and has a healing quality of its own. Our podcast provides tips, hints, and support for common healthcare conditions. Our guests and our listeners are just like you- navigating the complex medical world. We hope to ease some tension we all face when confronted with a new diagnosis.

We encourage anyone wanting to share their story with our listeners to email us at PodcastDX@yahoo.com .
​
105 Episodes
Reverse

FINDING THE RIGHT doctor isn't easy—and it shouldn't be. When you put your life in someone else's hands, you need to feel confident that this is an individual with enough smarts, qualifications, and skills to give you the care you deserve.

A hernia occurs when an internal organ or other body part protrudes through the wall of muscle or tissue that normally contains it. This episode discusses all hernia types with more attention given to  inguinal hernias with descriptive text that may not be appropriate for all listeners.

Our guest today is Brian Tally.  Brian developed idiopathic osteomyelitis in his spine in 2012.  The infection was missed by the healthcare providers and he ended up with severe damage to not only his spine but his organs as well as the disease ate away at him from the inside.  Brian is a former Sgt in the United States Marine Corps. He was stationed in Camp Lejeune NC where he served with BTO Co 2d FSSG, Okinanwa Japan where he served with Landing Support Co 3d FSSG and Camp Pendleton having served with base Hazmat / Compliance.  He enlisted in 1994 and served active from 1995-1999. Brian has been married for 20 years, has 4 children, and is a dedicated family man . He spends his time advocating and lobbying Congress to ensure the rights and protections of all veterans.

Although there is no single cause to suicide, suicide is a major public health concern. Over 47,000 people died by suicide in the United States in 2017; it is the 10th leading cause of death overall. Suicide is complicated and tragic, but it is often preventable. Knowing the warning signs for suicide and how to get help can help save lives. It most often occurs when stressors exceed current coping abilities of someone suffering from a mental health condition.  Our guest today is a suicide survivor and speaks openly about this difficult topic.

Focal Segmental Glomerulosclerosis (FSGS) is a disease in which scar tissue develops on the parts of the kidneys that filter waste from the blood.  Our guest today, Jon Rankin is a runner that discovered he had this disease as he was taking a physical for the Olympics. Jon was the 17th African American male to break the 4 minute mile! Focal = some Segmental = sections Glomerulo = of kidney filters Sclerosis = are scarred  In the spring of 2008, Jon Rankin was ranked among the best milers in the world. He had run a personal best of 3:53 for the mile and was ranked 4th in the US by Track and Field News that year. He was a favorite to finish in the top 3 at the US Olympic Trials and qualify for the 2008 Olympics later that summer. As part of a routine physical prior to the Trials, he was diagnosed with a terminal, incurable chronic kidney disease called focal segmental glomerulosclerosis (FSGS). Despite the diagnosis and his reduced kidney function, he finished 6th at the Trials, earning an alternate spot on the team. Three years later, Jon received an experimental stem cell treatment that appears to have reversed his chronic kidney disease. He is the only known person in the world to have received this treatment for FSGS. He is now completely healthy and is once again pursuing his Olympic dream, this time in the marathon. Jon is also committed to sharing his kidney disease story and advocating for research into stem cell treatments for chronic kidney disease sufferers via his public speaking and his inspirational apparel company Go Be More. #https://gobemore.co/founder

Mental Health & Suicide Awareness Through the Eyes of a Comedian

We certainly realize suicide is a serious matter, but we have a guest that has chronic suicide ideology and yet, he is a stand up comedian! He literally puts a new spin on mental health.  He was lucky enough to get off the ship he was working on (in his stand-up role) after being turned away by several countries due to the Corona Virus.  During the brief break he called in from Cambodia!  Yes, this is an episode you won't want to miss!

Sharon Krischer was diagnosed with Parkinson’s Disease in October, 2009 after several years of experiencing odd symptoms.  Ever since she has read everything she could find on Parkinson’s with the goal of finding a way to move on – literally – and not be defeated by the disease.

Most kinds of Juvenile Arthritis are autoimmune or autoinflammatory diseases. That means the immune system, which is supposed to fight against foreign invaders like viruses and germs, gets confused and releases inflammatory chemicals that attack healthy cells and tissue. In most JA cases, this causes joint inflammation, swelling, pain and tenderness, but some types of JA have few or no joint symptoms or only affect the skin and internal organs.  Our guest on this week's episode is Effie K. who was diagnosed as a teenager.

Factitious Disorder Imposed on Another (FDIA)

Factitious Disorder Imposed on Another (FDIA), also known as Munchausen Syndrome by Proxy (MSbP) is a very serious form of child abuse. The perpetrator, usually the mother, invents symptoms or causes real ones in order to make her child appear sick. Our guest today is Craig Lewis, not only survived the ordeal but he has also written a book on his experiences and is a Peer Counselor to help others.

Radon, The Radioactive Gas That May be Lurking in Your Home

Radon is a radioactive gas that forms naturally when uranium, thorium, or radium, which are radioactive metals break down in rocks, soil and groundwater. People can be exposed to radon primarily from breathing radon in air that comes through cracks and gaps in buildings and homes. Because radon comes naturally from the earth, people are always exposed to it. The U.S. Environmental Protection Agency and the Surgeon General’s office estimate radon is responsible for more than 20,000 lung cancer deaths each year in the U.S. When you breathe in radon, radioactive particles from radon gas can get trapped in your lungs. Over time, these radioactive particles increase the risk of lung cancer. It may take years before health problems appear.

Our guest today is Amee Quiriconi the Blogger and Podcaster for "One Broken Mom" she spoke with us recently about Rheumatoid Arthritis and now shares with us how childhood trauma can develop into lifelong illnesses like Autoimmune, Cardiac problems and even Cancers!  An extremely interesting  topic that opens the doors between sociology, psychology and physical medicine.

Post Traumatic Stress can be painful for the family as well as the person experiencing this disorder.  Dr. Seth Kastle of WaKeeney,  is a retired U.S. Army first sergeant and the author of the children’s books, Why Is Dad So Mad,  and Why Is Mom So Mad, both which address how military families can cope with post-traumatic stress disorder.

Heart Attack on a Train

Do to overwhelming positive feedback and requests we are running this episode for TWO WEEKS! Featuring Bill Hennessey who had a cardiac event after boarding a Chicago Metra train and the two bystanders that weren't about to let these be his LAST train ride!

Marc Coronel has dedicated his life to inspiring, motivating, and empowering others.  At the same time, Marc has been battling kidney disease and talks with us today about dialysis.  Kidney dialysis is temporary fix while a person waits for transplant.

Rheumatoid arthritis (RA) is an autoimmune disease in which the body’s immune system – which normally protects its health by attacking foreign substances like bacteria and viruses – mistakenly attacks the joints. Our guest today is Amee Quiriconi the Blogger and Podcaster for "One Broken Mom"

In this episode we discuss Mast cell activation disorder (MCAD) with Tara Notrica from New York.  MCAD is an immunological condition in which mast cells inappropriately and excessively release chemical mediators, resulting in a range of chronic symptoms, sometimes including anaphylaxis or near-anaphylaxis attacks.

Cerebellar slumping (aka cerebellar ptosis) occurs as a result of too much bone being removed around the foramen magnum that there is no longer enough bone to support the weight of the cerebellum. Today we speak again with Heidi concerning her Brain Slump diagnosis.

Although we normally discuss a different diagnosis each week, we wanted to introduce some forms of Therapeutic Recreation from time to time since Ron & Lita both received their advanced degrees in TR Administration from Aurora University. A study into the therapeutic benefits of scuba diving by students from the University of Sheffield’s Medical School  published in the Journal of Disability and Rehabilitation under the title: 'Can scuba diving offer therapeutic benefit to military veterans experiencing physical and psychological injuries as a result of combat?' leads us to this week's episode.  Jim Elliott, Founder and President of DiveHeart is here to talk about his organization, and the therapeutic benefits of SCUBA!

A premature birth is a birth that takes place more than three weeks before the baby's estimated due date. In other words, a premature birth is one that occurs before the start of the 37th week of pregnancy. Premature babies, especially those born very early, often have complicated medical problems.  Sheila talks about some of the medical challenges her premie twins have faced during their first 7 yrs..  Sheila is still a stay-at-home-mom due to the chronic health conditions her twins continue to fight.  Never stopping to rest, she continues to find ways to help raise her family in-between tube feedings and doctors visits.
See More
Comments