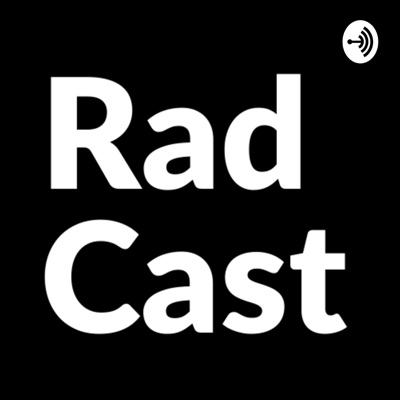 This month we're in celebration mode as we (Jamie and Uzoma - sorry Muhammad) have finally completed training. To mark the occasion we're releasing a rambles episode where we recap on the last 5 years as registrars, give our top tips for the trainees of the present and future️, discuss post CCT life and consider what the future has in store for RadCast.

The Rules of Radiology with Dr Paul McCoubrie

In this episode we speak to Dr Paul McCoubrie, Radiology Consultant at North Bristol NHS Trust, about his brilliant new book 'The Rules of Radiology', which is the culmination of a popular long running series that he has been releasing on a personal blog since 2013. Paul tells us about the inspiration behind the book and we pick his brains on the rationale behind some of our favourite rules ranging from the hilarious "Never offer to eat your pants", to the controversial "Never measure anything". This book for should be standard issue for all new radiologists....if you're a serial rule breaker, this episode comes with a trigger warning!

In this episode we speak to Dr Sam Dumonteil and Dr Amy Davis, two of the co-founders of Hexarad, a teleradiology company set up by a group of radiologists who met as registrars on the St George's training scheme. They tell us about the proprietary tech systems that give them a competitive advantage and how they have become the most peer referred teleradiology company through really prioritising the health and well-being of their reporters, even sending everyone a monthly box of healthy snacks! As all of the Hexarad co-founders have "portfolio careers", we also discuss entrepreneurship in Radiology more generally. Please note that the Hexarad scholarship mentioned in this episode has now closed but will re-open next year.

This month we kick off our fellowship review series with Dr Flavius Parvulescu, first year IR consultant at Royal Liverpool Hospital, who spent a year as an IR Clinical Fellow at Sunnybrook Hospital in Toronto from 2019-2020. We discuss his rationale for doing the fellowship, the application process (which begins two years in advance!), and his day to day experience within a Canadian IR department. We also discuss important lifestyle considerations such as the relatively modest fellow's salary and how he managed to make this work while bringing his wife and two pre-school aged kids along with him! A must listen for anyone considering doing an IR fellowship abroad. If anyone would like any more advice on applying for a Canadian IR fellowship, you can contact Flavius directly by email at flavius.parvulescu@gmail.com or on twitter @FIavius_P

The State of the Specialty with RCR President Dr Jeanette Dickson

In this special extended edition of RadCast we speak to Dr Jeanette Dickson, consultant clinical oncologist at the Mount Vernon Cancer Centre & President of the Royal College of Radiologists. In a wide ranging interview we discuss the shared roots of radiology and clinical oncology; her experience leading the College's COVID response (including how to COVID proof exams); the workforce crisis; diversity in the workforce, mental health and much more. Keep a listen out for some "RadCast exclusives" including the RCRs long overdue appointment of a public relations person to push agenda for radiology and clinical oncology to the media and politicians.

Precision MRI - A glimpse into the future with Ward Detwiler, President & CEO of Spintech

In this episode we chat to Ward Detwiler, President and CEO of Spin Tech, an MRI technology company specialising in advanced neuroimaging. He discusses several of the groups projects trying to realise the true potential of MRI including their flagship STAGE protocol which provides super-fast comprehensive brain imaging complete with quantitative analysis of biomarkers that has the potential to be used for anything from diagnosis of traumatic brain injury to movement disorders.

In this episode we chat to Dr Elizabeth Joekes who is a Consultant Radiologist with a special interest in Tropical and Infectious Diseases and Co-Founder of the charity Worldwide Radiology. She shares experiences from her eventful career which has taken her from IR in the Netherlands, to Head of a radiology department in Ghana and now the Liverpool School of Tropical and Infectious Diseases in Liverpool.  She also tells us about her charity, Worldwide Radiology, and the great work they are doing bringing radiology services and education to resource poor countries. Worldwide Radiology are actively recruiting a broad range of volunteers from radiologists and radiographers to sonographers and biomedical engineers. to find out how you can get involved visit: https://www.worldwideradiology.org/

2021 Clinical Radiology recruitment is now open, so we run through the key dates for your diary, including major COVID related modifications. We also tell you the RadCast Clinical Radiology Application Course (CRAC) and why we feel it is the best course out there to help you secure a number. Check out the course at https://www.radcast.co.uk/courses/CRAC. This episode is sponsored by Mcqbank who we strongly recommend for SRA prep for this year. Use the discount code radcast6m for a 10% discount on a 6 month subscription.

In this episode we speak to Dr Mat Elameer, who is a radiology trainee in Newcastle with a keen interest in academia and who has recently completed an Academic Clinical Fellowship (ACF). He tells us about his positives experiences of the ACF and gives his insight into the ACF application process. We also discuss his Neuroradiology research interests; the difficult balancing act between research and clinical commitments, and why there are so few academic radiologists. Mat is happy to be contacted for queries on academic radiology/ACF at mselameer@gmail.com

In this episode we speak to Dr Elika Kashef, Consultant Interventional Radiologist and lead for Trauma Imaging at Imperial College Healthcare Trust who gives us a great insight into the exciting and varied worklife of an IR consultant. We discuss turf wars, boosting the number of female IR consultants; whether intervention should split from diagnostic radiology and have its own faculty and much more. An all round brilliant advert for IR!!

In this episode we chat to Elad Walach, in New York, who is the CEO and Co-Founder of the Tel-Aviv based AI start-up AIDOC.  We discuss his transition from AI lead in the Israeli air force to the healthcare space; and the success of AIDOC's 'always on' AI solutions, which led to him being named in the Forbes European 30 under 30 list in Science & Healthcare in 2018. We also discuss AIDOC's contribution to the global COVID response, what the AI community can learn from gaming and Tel Aviv as a tech hub.

In this episode we speak to first year consultants Dr James Hare and Dr Dina Hikmat about their experiences transitioning from being senior trainees. They discuss the pros and cons of doing a fellowship, the step up in workload and responsibility and how to negotiate a great job plan. They also talk about how work life balance actually improves as a consultant and give senior trainees some tips on navigating the transition.

In our first transatlantic interview we discuss AI with Dr Martin Willemink, research lead at Stanford Cardiovascular Imaging group. We cover a range of issues related to medical imaging data from de-identification and labelling to synthetic data and federated learning. We discuss the findings of his international survey of radiologists opinions towards AI; and he tells us about his start-up Segmed, how they aim to solve the data problem in AI, and what its like living and working in Silicon Valley.  Special thanks to Merel Huisman and Eusomii for hooking up the interview!

Its been 6 weeks since our first coronavirus episode and we've now felt the full effects in the UK, so we reflect on the impact the pandemic has had on radiology services and our training and our differing fortunes when comes to redeployment.

In this episode of RadCast we discuss the Coronavirus pandemic gripping the world. We consider the effect it is predicted to have on already stretched radiology services and the plans being put in place to tackle what the biggest public health emergency the UK has faced in a generation.

In this episode we get a fascinating insight into this little known niche of medical imaging from qualified dentist, and senior Dental Radiology trainee, Dr Lee Feinberg. He explains why he chose radiology over traditional dental practice; why dental radiologists are well placed to report a range of head and neck studies and how he handles those dreaded lung apices!!!

In this episode we host Dr Elizabeth Dick, Consultant Radiologist at Imperial College NHS Trust, President of the European Society of Emergency Radiology and former President of the British Society of Emergency Radiology. She tells us about the rapidly evolving field of Trauma Radiology; how the rise of violent crime in london has affected the workload at her major trauma centre and reassuringly explains why ultra-low dose CT won't be replacing the primary survey!

In this episode we discuss the radiology speciality application process, due to open in November, with the candidate who ranked number 1 nationally in the application process last year Dr Omnya Ahmed. We cover all you need to know about the SRA, preparing a portfolio, interviews and little tips that can give you that competitive edge. This really is a must listen for anyone applying to Radiology this year!

In this episode we speak to Dr Richard Pullicino, a Consultant Neurointerventionalist at the world renowned Walton Centre for Neurology and Neurosurgery in Liverpool. He gives us a fascinating insight into the ultra-specialised world of Neuro-IR and addresses the critical issue of Thrombectomy; the gold standard treatment for large vessel strokes which is only available out-of-hours in a handful of centres in the UK.

In the second of our Aunt Minnie podcasts we sit down with Dr Giles Maskell, former RCR President and regular contributor to Aunt Minnie Europe and BMJ Opinions.  We discuss some of the important issues Dr Maskell has raised in his thought-provoking, yet entertaining articles ranging from Radiology errors to  department productivity and workplace-based rivalry.
See More
Comments