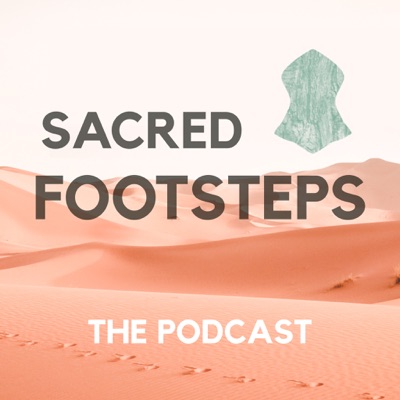 Sacred Footsteps is dedicated to travel, history and culture from a Muslim perspective. We talk to writers, historians, artists and others, about travel as a spiritual practice, and discuss aspects of Muslim culture and history that are often overlooked.
28 Episodes
Reverse

Omar, Yasmine and Shahroze discuss the history, evolution and spiritual significance of qawwali. Qawwali incorporates music, poetry and story-telling in to a celebration of Love. The singing of qawwali in Sufi shrines and mausoleums is a practice of samaa, a devotional practice that involves singing, dancing, playing musical instruments, praying, reciting poetry and participating in rituals in order to achieve a higher spiritual state.

026 Models of Liberation in West Africa

Mustafa Briggs speaks to Professor Rudolph Ware, author of the 'Walking Quran', about models of liberation in West Africa. They talk about the West African approach towards power and religion, and consider the diverse response of the ulama to the challenges presented by the transatlantic slave trade and European colonialism. They also discuss how racist colonial policies had the unintended effect of preserving sufism and traditional Islam in the region.

025 Which Rumi are you Reading?

Zara and Zirrar talk to poet Baraka Blue about the life, work and legacy of Jalal al-Din Rumi. Baraka tells us about the era in which he lived and how he came to be the great poet we know him as. They discuss his most famous work, the Masnavi, which is often referred to as the 'Persian Quran.’ Zirrar and Baraka share their somewhat differing views on the controversy surrounding English translations of his work, and the claim that Islam has deliberately been ‘erased’ from his poetry. We consider how Rumi was received in the West and the East, and how his poetry, or perceptions of his poetry differ accordingly.

For our first ever crossover episode, Zara speaks to Imran Ali Malik, host of the American Submitter podcast. They discuss the concept of travel as a 'mutual unveiling' and share 'transformative' travel experiences. Imran talks about his time in Guinea Bissau, where tribes were converting to Islam after an elder dreamt of the Prophet Muhammad (saw), and tells us about the Wali Songo, the 'Nine Saints' of Indonesia.

023 Islam in the Caucasus: Sufi Tariqahs, Imam Shamil and Resistance Through Dhikr

Muazzam is joined by journalist, producer and avid traveller, Salahuddin Mazhary. Salahuddin tells us about the history of Islam in the Caucasus, with a focus on Chechnya and Dagestan. He talks about the Sufi tariqas in the region and the role dhikr played in resisting the Russians. He also tells us about notable figures such as Imam Shamil and Kunta-haji and their legacies.

022 Searching for the Tomb of Imam Ghazali: The Personal Journey of a Lost Pilgrim

A few years ago, Zirrar, poet, photographer and key member of the Sacred Footsteps team, went on an incredible journey. Having already spent considerable time in Iran, he decided to set out alone, in search of the tomb of Imam Ghazali. In this episode, Zirrar reads his beautiful article recounting that journey. You can also read his words on sacredfootsteps.org.

Omar Rais and Zirrar speak to Alex Reynolds (Lost With Purpose) on how is travel political. They discuss the pressures of travel blogging while travelling in politically charged countries and the intentional and deliberate steps needed to challenge passive neutrality. Alex also sheds light on how politics factors in to the female solo traveller experience.

Zara and Muazzam speak to Mohammed Isaaq about 'finding' or 'knowing' yourself and ultimately, God, through travel. Isaaq explains how this desire has always been a reality for humans, and the ways in which it has evolved in the modern day. He talks about the importance of intention and introspection when travelling, and the essential quality that traveller's must possess: courage.

Omar Rais speaks to Alyssa Ratkewitch, a third generation Tatar Muslim living in Brooklyn and the vice president of the board at the historic Brooklyn Mosque. Also joining the conversation is travel writer, journalist and broadcaster, Tharik Hussain who specialises in the Muslim heritage of the West. Together they explore the migratory roots of Brooklyn’s Tatar community, the longest serving mosque in the United States, and discuss the identity-shaping of Muslims in the West.

Zara and Ali speak to travel writer Tharik Hussain about Lonely Planet's new Saudi Arabia guide book (which he authored) and the new Saudi tourist visa and its possible implications for travellers. They talk about historical sites in the country, including surviving Ottoman heritage, and indications that there is a shift in attitudes concerning historical preservation. They also ask why there are lack of Muslim travel writers.

017 Conservation & Protection of Wildlife from a Muslim Perspective

Muazzam Mir speaks to fellow Kenyans, activist and founder of Halal Safaris, Samia Bwana and conservationist and Mandela Washington Fellow, Raabia Hawa, about the conservation of wildlife and the environment, specifically from a Muslim perspective. They talk about whether hunting animals for sport is permissible in Islam, and discuss the responsibility of travellers to ensure their travel practices are ethical and not harmful.

Omar Rais and Muazzam Mir  speak to Sana Saeed, Sanna Wani and Hassan Yassin about their experiences as part of the Kashmiri diaspora. They consider what being ‘Kashmiri’ means, and the multiple cultures and identities that it entails. At the time of recording, Kashmir had been under a media and communications blackout, imposed by India, for several weeks, following the revocation of Article 370.

Zara and Ali are joined by Salim Bharwani and Maaria Lohiya to discuss their experiences of Hajj. They talk about whether or not pilgrims should be taking photos during Hajj, as well as the history of photography in the Haram al-Sharif. They discuss how modes of travel for pilgrims have changed over the centuries, and the benefits of reading pilgrim travel accounts from the past.

Omar Rais & Muazzam Mir speak to Thuraya Tarig, Mandour El Mahadi & Ehab Eltayeb, about their experiences growing up as part of the Sudanese diaspora. They discuss their individual experiences & memories of Sudan, their attempts to 'belong' & stay connected to 'home' while navigating two identities. They tell us about the role of the diaspora in supporting Sudan & how the ongoing revolution is changing the perception of the diaspora within Sudan itself.

Zara and Ali speak to Salim Bharwani winner of our Sacred Spaces competition about Arbaeen, one of the world's largest gatherings of people, and visiting the tomb of Imam Husayn. He explains its significance for Shias, as well as the profound effect it has had on him personally.  Later, Muazzam speaks to Muhammad Zahir, one of the cyclists from the Pedal to Hajj team, who are cycling from Kenya to Mecca for Hajj, to raise money for the education of children in Nairobi.

In this special episode from Kenya, Muazzam Mir speaks to Salim Amin, son of the late Mohamed Amin, at his home in Nairobi, about his father's legacy & the remarkable achievements of his career as a photojournalist. They talk about his work on the Ethiopian famine, that raised awareness and an outpouring of charity across the world, eventually leading to the Live Aid concerts. They also discuss the ethics of photojournalism, and the ways in which the profession has changed in the smartphone era.

010 Lahore: Secrets of the Old City

Zara speaks to Shahroze Khan, a politics and history student and photographer, about the walled city of Lahore. Shahroze explains its history, from its somewhat contentious roots, steeped in Hindu mythology, to the heights of its splendour under the Mughals, followed by its brief period as capital of the Sikh Empire in the 19th century. He discusses the politicisation of history after Partition and the creation of Pakistan, and talks about his favourite buildings and monuments in the Old City. Lastly, we talk about whether enough is being done to preserve the Old City and its historic sites, as well as the controversy surrounding the Tourism Summit recently held by the government of Pakistan.

Zara is joined by Sacred Footsteps' writers and photographers Afaq Ali and Omar Rais, and Chirag Wakaskar, a photographer based in Mumbai, India and creator of the @everydaymumbai project on Instagram. We discuss the response to our previous episode on Orientalism in travel photography, and Ali tells us about the 'Rooftop campaign' that demands National Geographic apologise for endorsing a 'racist and dehumanising' photo. Chirag talks about the problematic nature of 'Steve McCurry's India' and the ways in which photography is a tool of privilege within an Indian context, that often results in the 'othering' of the lower classes. Omar discusses the negative impact of 'voluntourism', a growing sector that is often linked to the 'white saviour' complex. Lastly, we talk about ways in which we can be proactive by supporting 'local' photographers.
See More
Comments