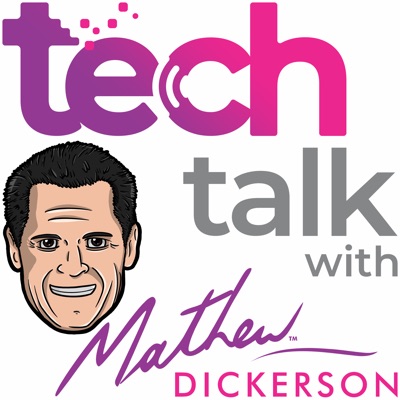 Technologist and Futurist, Mathew Dickerson, discusses the latest technology developments on a weekly basis with James Eddy. Gain a glimpse of the technological future in this technology podcast.
18 Episodes
Reverse

COVID-19 breath test. How big is too big when it comes to TVs? NASA and their 30-year-old computer. 'In Good Faith' deals with tech organisations. Finalists for new emojis. Eye tests on your phone. Worldwide sand shortage solutions. Energy at your fingertips! Do you have Pegasus spy software on your phone?

Windows 11 is here! THOR to fry a swarm of drones. Water from thin air. Space race is on - for tourists. Cryptocurrency investment lessons. Power from a nuclear battery. Quieter flying with graphene based aerogel. Naming the new Honda SUV EV. Needle free vaccines.

Irish passwords, watching your blood glucose and dishonour among hackers.

Technology robbing you of sleep. There may be honour among thieves – but not among hackers. Police revealing passwords in Ireland. Mobile phones revitalising ancient languages. Watch your blood glucose levels on your...watch. The end is nigh for Windows 10. Hydrogen or Ammonia for Japan? New phone features for the vision impaired. Mobile phone? Do you want a vax with that?

Supersonic flights, Jeff Bezos in space and cost of scams.

Charge your phone in eight minutes. An app to show you how local your products are. Detecting your snore score. Growing drugs or mining coins? Fully autonomous planes. A real-world Stargate between Lithuania and Poland. More efficient transparent solar panels. Green hydrogen in regional Australia. Wages in bitcoin.

Will the Ford F-150 Lightning EV be a game changer? Do you like the idea of a big-screen TV but don't like the clutter? Batteries can be made from lithium or cobalt or nickel or...concrete? What? Concrete? 13 years in prison for a photo of your hand on social media. How? How do you create a natural sleep cycle when you are live on a submarine? Watch out for smishing...but what is smishing? Are you one of millions now using a Digital Driver Licence? Finally. Which State in Australia is now offering free rego for Electric Vehicles? Would you be happy with someone else to pay to control your life?

VR to cure phobias, future petrol stations and where to store photos.

Can VR technology help with a fear of spiders and needles? Can robots be used to comb and untangle hair? Why are NBN installations and repairs being delayed? How secure are your security cameras? Have you ever thought about renting out your driveway space? Would you pay a monthly fee to use Twitter? What is all the hype about lossless streaming and should you care? What options do you have to store your photos? What does a petrol station of the future look like?

Bending light, lasering weeds and Johnnycabs drive off the screen.

How many people does it take to remove the weeds from 8 hectares of onions? Can light travel around corners? Would you like to try an EV before you buy? Tax time = scam time? The gentlemen of the cyberattack industry. Can a smartphone help you “see” in the dark? What is Academy Award winner Hans Zimmer doing at BMW? Is Ford about to revolutionise the ‘truck’ market in the US? Are you ready to jump in a robotaxi yet?

Power from skin, smart glass with Krypton and saving the birds.

Is there a technology solution to stop birds slamming in to tall buildings and masts? Can we charge our smart watch with body heat? Is one Australian state about to encourage residents to purchase Electric Vehicles (EVs)? What does it take to be tagged a 'smart' glass? The city of Eindhoven, known for innovation, is the first in Europe to do what? Apple V Epic Games in a battle over what? How do you actually know a QR Code is legitimate? Is a spinning propeller blade the most efficient shape for a wind turbine? Be careful with your car - thieves are looking for palladium!

Did the UK Post Office place too much faith in their software? Could someone use Bluetooth tracking devices to stalk your every movement? What is the topic of the latest Wikipedia editing wars? Which major car manufacturer has announced their fossil-fuel end date? Fancy a new domain name for your business? Are scientists any closer to a truly biodegradable plastic? Have we now reached the end of the line for the landline phone? Is Airbus about to take a giant leap forward in flying safety? Will the US Congress change the landscape for autonomous vehicles?

Is there a modern alternative to rubbish bins along the footpath? Is it possible to create a whiter white paint? Why is Spotify about to venture in to the hardware space? How has Google fared in the Australian Federal Court? Would you be happy to let a smart speaker watch you sleep? Green energy is good for the environment but is it good for the economy? How can you tell if it is confirmation bias or your phone really spying on you? Surveys show Australians want to buy electric cars, so why are sales stalled at around 0.7%? Which is the latest US State to put a ban in place for the sale of gas-powered vehicles?

What new feature from Android helps us while we walk down the street? Do you have trouble stopping your kids from playing on their phones? Keep leaving your keys “somewhere” but just can’t remember where? Like the new Xbox? Need a new fridge? Why not combine them both? Do you need a CyberLandr with your Cybertruck? Segway motorbike. To stop using easy passwords people are turning to their pets. Do you want a new guitar but you don’t want it to look like a new guitar? Are Queensland drivers finally going to catch up to their NSW counterparts? 124062

Specs of the new Hummer EV. Who is the one person you don’t want to send an X-rated video of yourself to? Will it soon be harder to create a social media account? How many drones should you use if you want to do a spectacular light show? Who is Microsoft going to make AR headsets for? Another social media site has had a date breach. Who was it this time? How can you check if your data was part of the Facebook data breach? Which company has given up on their smartphone business? Do you want a way to make a million in a couple of weeks? 124091

No more flats, fleeceware robbing us and magically enhancing photos.

Sick of punctures on your bicycle? Why not use the same technology that NASA uses on its rovers? Have you checked your mobile for ‘Fleeceware’ apps? They may be costing you hundreds of dollars. Movie scenes that show a photo magically ‘enhanced’ when an IT expert clicks on a button are just fictional, right?  Meet Stretch, a new robot from Boston Dynamics. Can cows be part of the solution to our electricity needs? Chipageddon is having the most impact on what product? Fancy going back to the future with a VW Combi? How is renewable energy impacting gas pipelines? Remember the Apple AirPower that disappeared before it existed? Has another company delivered on the Apple promise? 124021

Bushfire fighting satellites, EVs beating Tesla and Internet access up in the air.

Are satellites the answer to Australia's bushfire problems? Which tiny EV is beating Tesla as the best-selling EV in the world? Why has the consumer protection agency in Brazil slapped Apple with a $2 million fine? When we can finally fly internationally again, will the Internet on planes be any better? Who are sex offenders targeting on dating apps? Who will win the battle to put satellite Internet in to your backyard? Whoops! Facebook, Instagram, WhatsApp down in global outage! How did they inform the world they were having problems? Huawei was going to take over the world – until the West intervened. What is its new plan to now generate profits? What do you do when the manufacturer of Grand Theft Auto (GTA) won’t fix a known annoying problem? 124050
See More
Comments