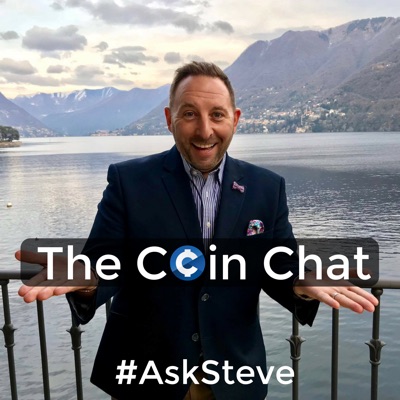 Hosted by Steve Good and Yuri Cataldo, The Coin Chat is your trusted source for all things cryptocurrency and finance. Each week we dissect an important issue and cut through the noise and misinformation out there in the world of the blockchain, cryptocurrency, Bitcoin, Ethereum, and ICO's to capture the facts that truly matter to you that will give you an edge in this fast-moving emerging market. The Who, What, Where, When and, How of what you need to know in crypto to get ahead so you won't #BeLeftBehind.
100 Episodes
Reverse

Visit us: https://thecoinchat.net Sign up for exclusive access to our new book http://beleftbehind.com Meet Tatiana: TATIANA MOROZ is a soulful and outspoken singer-songwriter and the premier artist in the Bitcoin and Liberty activist communities. Following the release of several independently produced LPs, EPs, and singles, Tatiana’s album Keep The Faith was released in 2017 having been funded with cryptocurrency. Her music is a fresh take on the folk style of the revolutionary ’60s and ’70s, an original blend of pop, rock, blues, and alt-country. Tatiana is the creator of TatianaCoin, the first-ever artist cryptocurrency. Tatiana Coin and other artists' coins allow for connecting fans directly to artists in many ways. A driving force in the industry, she is also the Founder of Crypto Media Hub, a PR, marketing and advertising agency for the Bitcoin space. "The Tatiana Moroz Show" podcast streams on several outlets including the Let's Talk Bitcoin network and is quickly growing. Tatiana performs and speaks at blockchain technology and liberty conferences all over the world including SXSW, Harvard University, the National Libertarian Party Convention, Freedom Fest, Berklee College of Music and Inside Bitcoins. She has appeared on NASDAQ, Market Watch, Yahoo Finance, Fox’s Stossel, Reason Magazine, the NY Times, Billboard, RT America, Infowars, International Business Times, Bitcoin Magazine and many more. CONTACT: www.TatianaMoroz.com https://www.facebook.com/TatianaMorozMusic/ https://twitter.com/queentatiana https://www.youtube.com/user/ForeverMoreTatiana www.CryptoMediaHub.com www.ProofofLovecast.com www.TheTatianaShow.com

Ep101 Facebook vs. Bitcoin - Who will be the real winner?

Ep97 Wow! is this the future of the internet? Moritz Bierling | Holo

Ep95 Is Wirex in trouble? Their Telegram is full of scammers! Their Update is a disaster!

Ep94 What does RedFox Say? Komodo CEO Benny Tells ALL!

Ep93 - Would you like to know why Nelly Moffett has gone All In on Crypto?