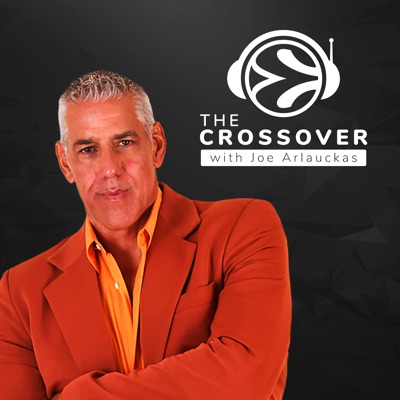 The Crossover with Joe Arlauckas

Joe Arlauckas sits down with some of the biggest names in European basketball - past and present - to learn more about their lives on and off the hardwood.
38 Episodes
Reverse 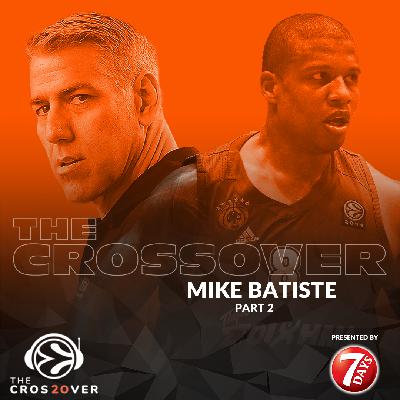 Mike Batiste joins Joe Arlauckas to continue his remarkable story of life at Panathinaikos. The LA born star compares his first EuroLeague title win to falling in love, explains how the Greeks treated him like a rock star and why he isn’t closing the door on a coaching future at Panathinaikos. Plus he reveals why he would never break a Željko Obradović curfew! From Long Beach to the EuroLeague. In the first of a two-part special, Orlando Magic Asst. Coach Mike Batiste tells us his incredible story of how he survived Californian gang culture to become a multiple EuroLeague Champion with Panathinaikos. He reveals how basketball changed his life, which coach he thinks is the greatest of all time, and why the Greek derby was so special! In one of Joe’s special interviews to mark the 20th Anniversary of the Turkish Airlines EuroLeague, Luigi ‘Gigi’ Datome is the latest to join The Crossover as they delve deep into the charismatic Italian’s fabulous career.  They discuss his return to Europe from the NBA as he was ‘starving’ for basketball and playing in front of the big stage once again.  Joe and ‘Gigi’ talk about Fenerbahce’s EuroLeague victory on home soil in 2017, as well as the bet he had with teammates to cut his hair if they were to lift the trophy. They also discuss his life off court, that includes his generous charity work, his love of the arts and his guitar playing skills in front of a huge audience! In the latest episode of The Crossover, presented by Endesa, Joe Arlauckas is joined by Zalgiris Kaunas (https://www.euroleague.net/competition/teams/showteam?clubcode=ZAL&seasoncode=E2019) star guard, KC Rivers.  They chat about life in lockdown, how his passion for basketball began growing up in North Carolina, influenced by his uncle and former NBA player, Byron Dinkins, and his respect and fear for his grandmother!  He discusses playing for multiple teams throughout his career, including the highs and the lows, as well as some of the toughest opponents he has come across. Plus he chats about some of the fantastic derbies he has played in whilst playing for Real Madrid against Barcelona and for Panathinaikos versus Olympiacos. Xavi Pascual is the latest to join Joe Arlauckas on The Crossover, with this episode presented by Endesa. In one of Joe’s special interviews to mark the 20th Anniversary of the Turkish Airlines EuroLeague, Pascual talks about the 2009-10 season, which saw his FC Barcelona side become European champions at the Final Four in Paris. He discusses his coaching development and unexpected elevation to the Barcelona hot seat, just hours before an important game. Pascual also chats about the development of Barca great Juan Carlos Navarro, about moving to coach Panathinaikos and his first Athens derby, the EuroLeague games he would love to play again and about the start of his tenure at Zenit St Petersburg. The Anadolu Efes Istanbul coach talks to Joe Arlauckas about his life and achievements. Ergin Ataman has won a host of titles at the helm of many different teams in Turkey and Italy, including Galatasaray, Besiktas, Montepaschi Siena and during three spells with the Turkish Airlines EuroLeague leaders. He discusses the pros and cons of criticising players in public, why there aren’t more of his countrymen coaching at the top of European basketball and how he took Anadolu Efes Istanbul from the bottom of EuroLeague to last season’s Championship Game after recruiting the likes of Shane Larkin, Vasilije Micic, Tibor Pleiss and James Anderson. Not many people have three EuroLeague titles and fewer have won the competition with both Panathinaikos and Olympiacos, so there is plenty for Stratos Perperoglou to talk about on The Crossover with Joe Arlauckas. The Crvena Zvezda mts Belgrade small forward explains why his family fell out over his teenage move to the Greek capital, responds to being called “the ultimate team player” and remembers his excitement at joining Zeljko Obradovic’s intense Panathinaikos side. Perperoglou discusses his controversial switch to Olympiacos and his first Athens derbies with both clubs. He also chats about his potentially career-ending blood clot, his strong Christian faith and making the move out of Greece, before picking a patriotic All-Decade EuroLeague team. 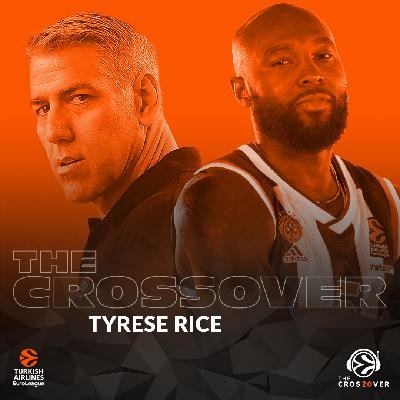 EuroLeague winner Tyrese Rice chats to Joe Arlauckas about delivering eye-catching performances at the very biggest moments. His basketball career has run parallel to the life of his son, who was born just as he was getting started in college. In another special episode to mark twenty seasons of the Turkish Airlines EuroLeague, the American talks about building a relationship at Maccabi Tel Aviv with coach David Blatt and about dominating the Final Four in 2014, when Maccabi upset both CSKA Moscow and Real Madrid to win the title. Rice was the Top Scorer and MVP in Milan. He also speaks his “crazy” first derby for Panathinaikos against Olympiacos, when he netted 41 points in their EuroLeague win last December. Find out why Tyrese Rice has moved between ten clubs in ten years and whose name he has tattooed on his arm. 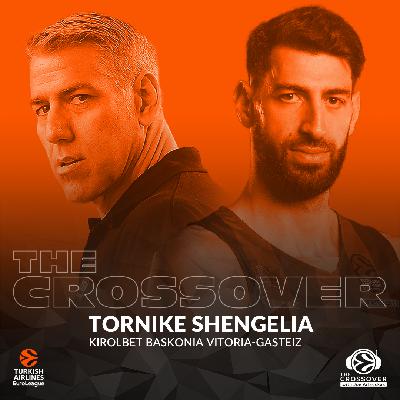 Toko talks to Joe Arlauckas about growing up in Georgia without electricity, his tireless work ethic and his part in that infamous fight during a Basque derby. Before picking his EuroLeague All-Decade team, Baskonia’s power forward discusses his dream NBA draft, subsequent US disappointments and how he was influenced by Kevin Garnett while at the Brooklyn Nets. 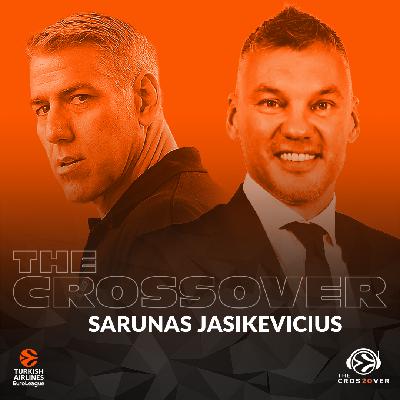 The legendary point guard joins Joe Arlauckas to discuss his life and career, including four EuroLeague-winning seasons and his transition to coaching at Zalgiris Kaunas. ‘Saras’ Jasikevicius talks about the sacrifice that his mum made when she fell pregnant with him and about growing up both inside then outside the Soviet Union. There is also chat about his time in America and spell in the NBA, his Final Four nerves and the highlights of the Lithuanian star’s time playing for Barcelona, Maccabi Tel Aviv and Panathinaikos, as well as Zalgiris. Plus, Jasikevicius gives us memories of Vassilis "Billy" Spanoulis, playing under Zeljko Obradovic and being shouted at by Arvydas Sabonis. 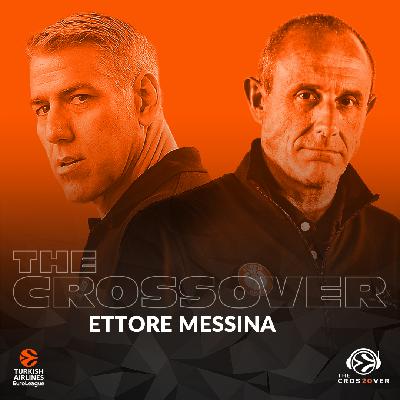 Four-time EuroLeague-winning coach Ettore Messina joins Joe Arlauckas to chat about his life in basketball. The Italian is now back on the continent leading AX Armani Exchange Milan, after enjoying a stint in the NBA assisting Gregg Popovich at the San Antonio Spurs. In another special episode to mark twenty seasons of the Turkish Airlines EuroLeague, the Italian talks about his successful time with Bologna and about bringing European glory back to CSKA Moscow after 35 years. But amid those titles were defeats that still hurt today, having to cope with his young son’s hospitalisation during CSKA’s 2006 triumph and regrets about his teenage decision to become a coach. The incredible transformation of a Cape Verdean kid into Sergeant Swat! The life and career of Walter ‘Edy’ Tavares is the raw material for Joe Arlauckas on the latest episode of The Crossover, and the Real Madrid centre’s story leaves Joe almost speechless. Tavares had close to zero interest in basketball when a holidaymaker recommended him to Gran Canaria because of his height. After sleeping through his original try out, Tavares then earns his passage into the professional ranks wearing sneakers three and a half sizes too small. It is the start of his journey to the NBA, to winning EuroLeague and to becoming the league’s Best Defender. One of the few men to have claimed back-to-back EuroLeague titles joins Joe Arlauckas to chat about his life and career so far. In another special episode to mark twenty seasons of the Turkish Airlines EuroLeague, Georgios Printezis talks about his Olympiacos team’s iconic victory over CSKA Moscow in the 2012 Championship Game, coach Ivkovic’s half time masterclass in motivation and his own correct premonition that he’d score the final basket to clinch their astonishing comeback win. Printezis also remembers what it felt like to be champions again twelve months later, discusses his relationship with ‘Billy’ Spanoulis, talks about his loyalty to Olympiacos and picks an All-Decade EuroLeague team. Two-time EuroLeague winner Cory Higgins talks to Joe Arlauckas about his life and career, including the feeling that he continues to be “overlooked and underrated.” In another special episode to mark twenty seasons of the Turkish Airlines EuroLeague, the American analyses those recent triumphs with CSKA Moscow and chats about some Final Four pain in-between. With his father and brother working in the NBA, the Barcelona star discusses getting into ‘the family business’ and a childhood surrounded by Hall of Famers, including his godfather Michael Jordan. Higgins also talks about the quiet confidence in his own ability that helped him become a major player and about his basketball journey so far; around America and then to Russia, Turkey and now Spain. CSKA Moscow’s Daniel Hackett joins Joe Arlauckas for a chat about his life and career. In the summer of 2018, Dimitris Itoudis was looking to sign a player with a very specific profile. The Italy international fitted the bill perfectly and became a EuroLeague winner at the end of his first season in the Russian capital, impressing in the Championship game. Hackett discusses his first Final Four and also looks back on his time with Olympiacos, the crazy atmosphere of games against Panathinaikos and watching Spanoulis v Diamantidis from close quarters. His time in Greece ended with serious injury, depression and Olympiacos not renewing his contract, but after a great year at Brose Bamberg, he received a phone call that made him cry... Joe Arlauckas speaks to shooting guard Jaycee Carroll about his life and career, in another special episode to mark twenty seasons of the Turkish Airlines EuroLeague. The American talks about the key moments in Real Madrid’s two recent EuroLeague-winning campaigns and discusses the reasons why his club fell short in others. We also hear about Carroll’s faith, family and freakish ability to nail three pointers. Joe Arlauckas goes to Athens to speak to Theo Papaloukas, in the first of The Crossover’s special episodes to celebrate the 20th anniversary of the Turkish Airlines EuroLeague! A veteran of nine Final Fours, the former CSKA Moscow and Olympiacos star talks about his two EuroLeague-winning seasons with CSKA and the many times in which his teams went close to European glory – campaigns which were often curtailed by stinging defeats at the hands of big rivals and good friends. Find out how Papaloukas became a EuroLeague legend, despite rarely being a starting player. Season 2 of The Crossover begins with Joe Arlauckas chatting to Fenerbahce’s Ali Muhammed. In a frank and open interview, the Chicago-born guard talks about his traumatic early life, including the violent death of his brother and his mother’s issues with addiction. Muhammed reveals how he ended up in prison and tells of the struggle that the young Bobby Dixon had to change his life for the better and find a way out of poverty. He also chats about a daunting start to life in Europe, linking up with Zeljko Obradovic at Fenerbahce, career highs like the 2017 EuroLeague title and lows like the Championship Game twelve months earlier. Plus, stacks of sneakers, darling daughters and a reward Rolls Royce. Four-time NBA champion Tony Parker chats to Joe about his life and career, in an interview recorded shortly before the point guard decided to end his time with the Charlotte Hornets and retire from basketball.   Parker discusses what he’ll do next and speaks about his growing involvement with sport in Lyon, including as President of EuroLeague wild cards ASVEL Basket.   The former France international and six-time NBA All-Star talks about his start in the U.S. and tells Joe what it was like to play alongside Manu Ginobili and Tim Duncan at the San Antonio Spurs, under legendary coach Gregg Popovich. THE CROSSOVER AT THE FINAL FOUR: F4GLORY