A weekly show answering the question, "How is the Internet holding up this week?" Watch each week to understand the latest outage trends across global ISPs, public cloud providers, collaboration app networks, and edge networks like CDNs, DNS, SECaaS, etc.
10 Episodes
Reverse 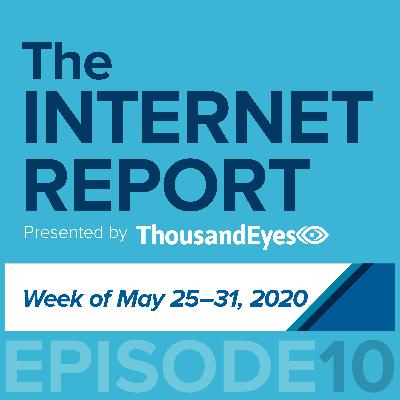 On this week’s episode of the Internet Report, I’m joined by my colleague, Michael Batchelder (aka Binky), to discuss a DNS-related service disruption that affected users trying to access Amazon.com. We also talk about a recently discovered DNS vulnerability that could leave DNS providers susceptible to DNS amplification DDoS attacks. If you’re curious about what went wrong with Amazon’s service last week and want to know more about the role of DNS and why it’s so important, don’t miss this episode. 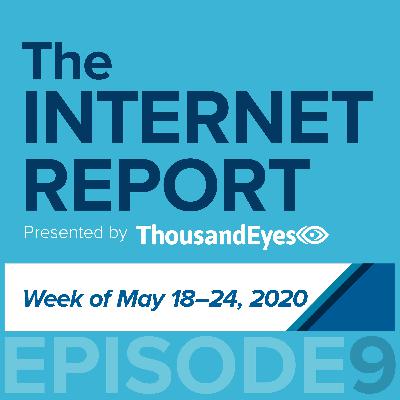 Ep. 9: Outages Become a Night Owl’s Nuisance, and How COVID-19 Impacted the Submarine Cable Industry (Week of May 18-24)

Welcome back to the Internet Report! On this week’s episode, we cover our usual check-up of ISPs, cloud and collaboration app outages, and discuss several major middle-of-the-night outages that affected services from providers such as Google and Virgin Media. We’re also joined by TeleGeography’s Alan Mauldin to discuss submarine cables, terrestrial networks, international Internet infrastructure and more. 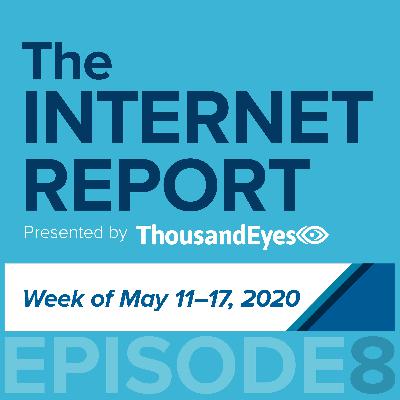 Never a dull minute on the Internet! In today’s episode, Archana and I dove into a YouTube service disruption and an (unrelated!) Google network issue in India. We also discussed Slack’s explanation of their service disruption last week, and even talked through a case out of France where an education site experienced performance issues in lock step with time-of-day usage 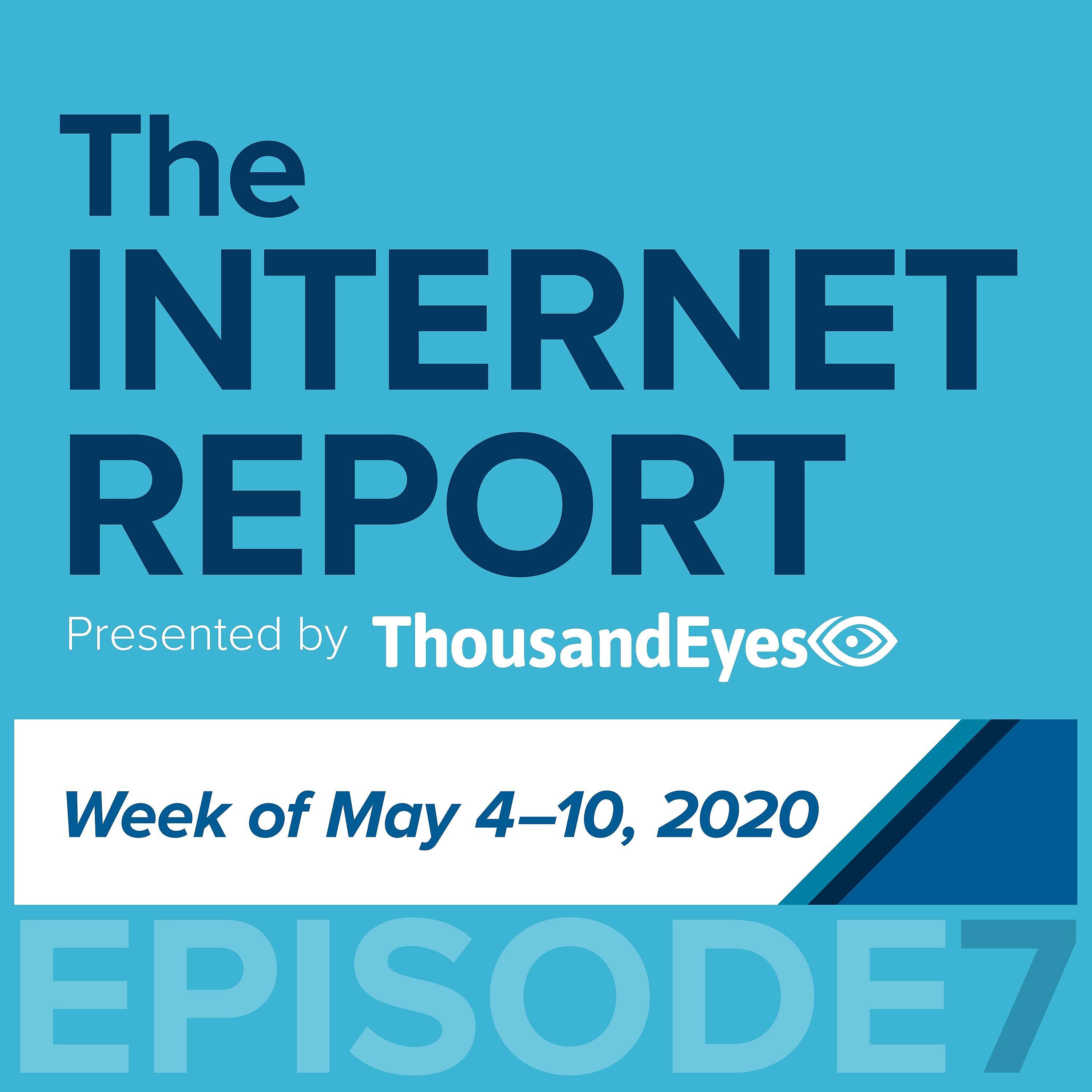 On this week’s episode of The Internet Report, Archana and I cover some newsworthy updates that we’ve seen over the past week. We discuss a notable Facebook SDK outage that had ripple effects on other popular services that leverage its log-in functionality, including Spotify and Tik Tok. We also discuss a blog from AWS sharing their thoughts on the JEDI contract. We’re also joined by Arash Molavi, the lead Internet researcher here at ThousandEyes. Arash shares his insight into outages we’re seeing, discusses what constitutes an outage, and why loss, latency and jitter can impact end-user experience in various ways depending on the context. Last, we cover our usual availability check of ISP, public cloud, and collaboration app provider networks. 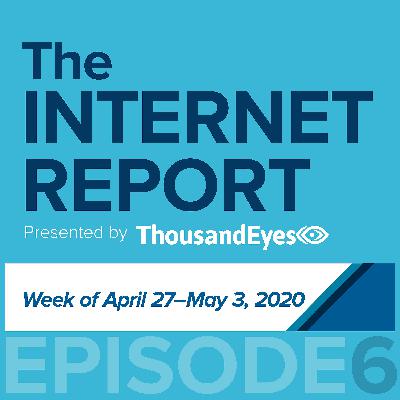 On this week’s episode of The Internet Report, Archana and I are thrilled to be joined by Martin Levy, who is a distinguished engineer at Cloudflare focused on BGP route security and expanding Cloudflare's global network footprint. Check out this week’s episode to hear his thoughts on BGP security, best practices such as using RPKI and some recent routing incidents. After speaking with Levy and hearing his perspective, we jump over to a discussion around some notable outages this past week, particularly one at Virgin Media that affected connectivity for users in the UK for several hours. After going through these events, we cover off on our usual health check of ISP, cloud, and collaboration service providers. 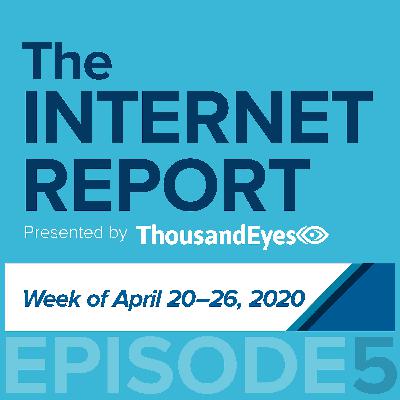 In this week’s episode, Archana and I are joined by a special guest, Christian Koch, who is the head of product, cloud and ecosystem at PacketFabric. Listen in as we cover the current state of global Internet health and dive into network outage numbers across ISPs, public cloud and collaboration platforms. This week, we saw that the overall number of outages wasn’t particularly concerning, reflecting our “new normal,” but there were a few notable outages that had far-reaching impacts. In particular, an outage at Tata Communications and a fiber cut at Level 3/CenturyLink had significant end-user impacts, as did another outage that took down access to GitHub. 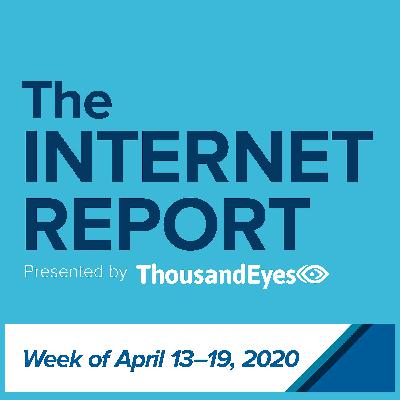 Ep 4: ISPs Back in the Spotlight, US Banks Stimulus Check Stumble, Is Netflix Breaking the Internet?(Week of April 13-19, 2020)

In this week’s episode, Archana and I discuss some pretty significant events that unfolded over the past week. First, we saw a notable increase in the number of ISP outages occurring across the global Internet—a trend that had seemed to plateau in previous weeks. After going through our usual health check of provider networks, we examined an interesting online banking outage that occured as millions of Americans checked on the status of their stimulus checks. This caused understandable angst as consumers were unable to log in or access basic online banking information. Finally, we took a look at how popular streaming services like Netflix actually work, and our experts weigh in on whether or not Netflix is “breaking the Internet.” 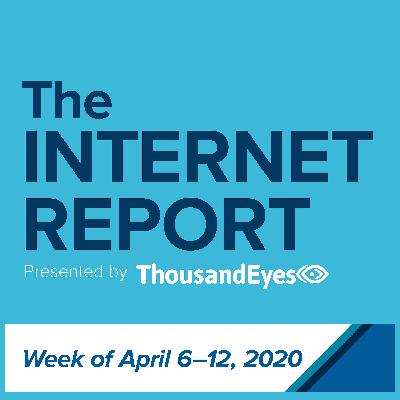 In this week’s episode, Archana and I welcomed David Belson (@dbelson) of the Internet Society. We got to discuss some rather good news -- overall outage events are down more than 40% globally, and more than 44% in the U.S. after a several-week-long spike in events. We very well may be looking at our ‘new normal’. 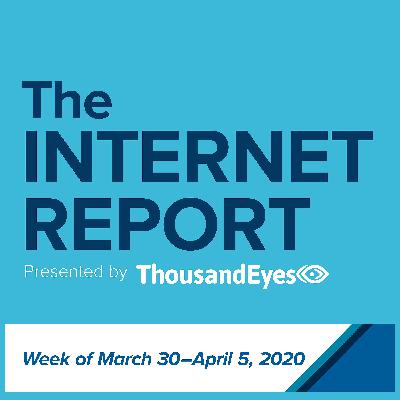 It was yet another eventful week on the Internet, folks. In this week’s episode of The Internet Report, Archana and I discuss the latest figures around global Internet performance, noting that, despite an elevation in outages last month, the Internet is holding up well. ISP outages declined slightly in the U.S. and globally last week, but that wasn’t the case for UCaaS providers, who had a particularly rough time last week, especially in the United States. There was also a fairly large BGP route hijack on April 1 courtesy of Russian ISP, Rostelecom — the same ISP responsible for a route hijacking incident back in 2017. The prefixes involved belonged to Amazon, Cloudflare, and other services, and impacted the reachability of sites like Yelp.com. 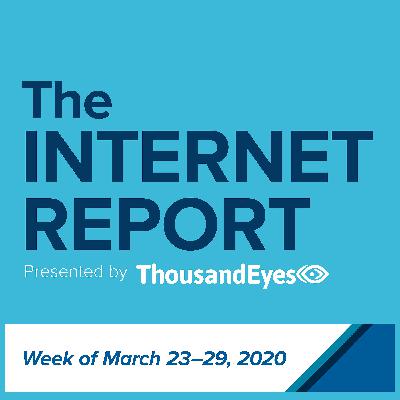