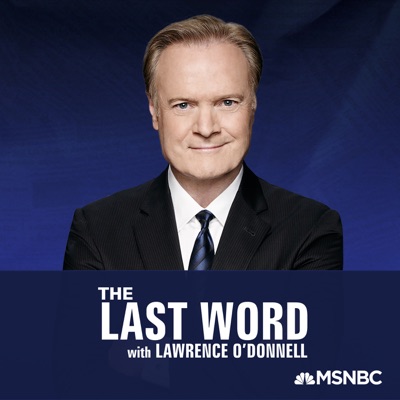 The Last Word with Lawrence O’Donnell

Drawing upon his experience as a former chief of staff on the Senate Finance Committee and as an Emmy-winning executive producer and writer of ‘The West Wing,’ Lawrence O’Donnell examines the compelling and impactful political stories of the day. Join him every weeknight.

National Guard activated in many U.S. cities as protests persist

Tonight on the Last Word: Authorities deploy tear gas on protesters after curfew. Also, the ex-officer who knelt on George Floyd’s neck is arrested and charged with third-degree murder. Plus, a Trump tweet echoes a racist phrase from the 1960s. And Rev. William Barber and Joy Reid talk to Lawrence about poverty in America amid the pandemic. Ali Velshi, Paul Butler, Marq Claxton, Orlando Patterson, Yamiche Alcindor and Morgan Chesky also join Lawrence O’Donnell.

Joe Biden: Trump is a ‘fool’ for belittling mask wearing

Curve bending for NY, but cases trending upward in much of U.S.

Tonight on the Last Word: The New York Times reports dozens of children have been hospitalized with a mysterious illness possibly tied to Covid-19. Also, food banks struggle to meet growing need amid the pandemic. Plus, Dr. Harvey Fineberg talks to Lawrence about forging a strategy to defeat Covid-19. And Trump pushes to reopen the economy despite rising cases. Ron Klain, Dr. Dara Kass, Beto O’Rourke and Ezra Klein also join Lawrence O’Donnell.

Trump issues vague guidance about reopening, has no testing plan

Tonight on the Last Word: There are over 665,000 cases of coronavirus in the U.S. and 34,283 reported deaths from the virus. Also, the White House unveils a plan to reopen the economy as jobless claims soar. Plus, food banks ask for urgent help to meet immense demand. And Steve Schmidt talks to Lawrence about the ongoing protests against stay-at-home orders across the country. Dr. Dara Kass, Laurie Garrett, Rep. Dan Kildee, John Heilemann and Eric Cooper also join Lawrence O’Donnell.

Dr. Fauci: Hope for ‘degree of normality’ by November

You'd think from the excuses he gave, that it's virtually impossible for DJT to walk and chew gum at the same time.

Weell, that means that Bernie needs to give all of his support to Joe Biden, and drop out. He is not a Democrat and should not be running on a Democratic ticket. Period.

HARVEY'S WALKER I have had 2 back surgeries and a hip replacement so this is accurate information. When you have a back, hip, knee surgery you generally will use a walker until or if you m.j ove up to crutches and/or cane. your orthopedic surgeon or neurosurgeon does not want his surgery ruined because you are hunched over the walker. they are adjusted to suit your needs usually by the therapist. the first one he came in with is the cheap metal one that is used right after surgery for safety reasons as it has No Wheels and has to be moved manually . either slid on floor or picked up and dropped a step. That whole thing was for him to look sickly and frail! hahaha! when he came in with the better one I'm positive someone had to tell him the metal one is not believable!!! Oh Well! too bad

Thank you for the list of "no mores" without the trumps in the WH. From your mouth to God's ears. Thank you.

I think someone needs to ask Bloomberg why he vehemently contested the settlement with the Exonerated Five? Just to hear him justify redlining actually falls in line with his argument against the five, innocent Black men, who were just children when they were convicted. He supported "stop and frisk" against Blacks and Latinos and, in fact, encouraged it. It would just be electing another Trump. The ONLY difference is that he earned his billions.

"Ask the lord to help you fake being a good person." was meant for the audience of one - how sad

These exact words need to be written to a House and Senate staffer or congressperson and read OUT LOUD.

I think Putin has something on Trump. It's probably directly related to why he's so resistant to show his tax returns.

What is conservatism? What is the hidden positive aspects I'm not seeing?

Evan McMillan understated Trump's response to not being convicted by the US Senate. He will claim total exoneration. and the US House is guilty of conducting a witch hunt and committing treason. They should all be investigated and prosecuted.

This is a repeat of yesterday's show. There was no All In with Chris Hayes posted yesterday and no Sunday show from AM Joy.