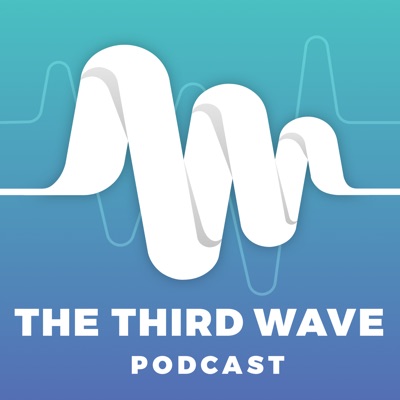 The Third Wave Podcast explores the many minds of the emerging psychedelic renaissance. Through conversations with thought leaders across various disciplines, we explore how psychedelics, when used with intention and responsibility, catalyze transformation on both an individual and collective level.

Are you a newbie fresh off an incredible first psychedelic experience? An experienced psychonaut with decades of use? Or just an interested bystander, curious about the relevance of psychedelics to health and wellness?

Regardless of your why, our podcast gives you a unique look into how psychedelic substances change culture and society for the better.
103 Episodes
Reverse

Erick Godsey - Myth, Mastery, and the Mystical Cure for Depression

Erick Godsey is on the forefront of self-optimization through physical health, reframing our stories, responsible psychedelic use, mastery, and flow. In this episode, he talks with Paul about the psychedelic experience that almost broke his brain, how he defines “mastery”, the lies we’ve been told about psychiatric drugs, and how to truly recover from depression and anxiety.

Dr. Casey Paleos is among the earliest researchers in the third wave of psychedelic study, both in ketamine and other psychedelics. In this episode, he and Paul discuss the use of ketamine in telemedicine, early psilocybin and ketamine trials, effective ketamine protocols, and re-forming the grooves in our brains.

In this episode, Paul Austin, founder of Third Wave, and former UFC fighter Kyle Kingsbury discuss the role of psychedelics in parenting, polyamory, interconnectedness, masculinity, caring for the earth, and accepting paradox.

Will Van Derveer, M.D. - Shaping Your Own Reality with Ketamine

In this episode, Paul Austin, founder of Third Wave, and integrative psychiatrist Dr. Will Van Derveer discuss the mind/body connection, the role of ketamine as a catalyst for long-term whole-body health, and the importance of personal responsibility in sustaining positive transformation.

Marcela Ot'alora - What Quarantine and Psychedelics Share in Common

In this episode, Paul F. Austin, founder of Third Wave, and Marcela Ot'alora, researcher and MDMA therapist, discuss some unexpected similarities in the insights gained through isolation and psychedelic experiences.

In this episode, Paul F. Austin, founder of Third Wave, and Trevor Millar, Executive Director of the Canadian Psychedelic Association, discuss the recent petition to the Canadian government to decriminalize all psychedelics, how to blend the competing philosophies of the personal and the collective, and the drive to share the transformational benefits of psychedelics with others.

In this podcast, Paul F. Austin, founder of Third Wave, and Jesse Gould, founder and President of Heroic Hearts Project, discuss the role of ayahuasca in treating veterans’ mental health. As an army ranger deployed three times to Afghanistan, Gould overcame his own PTSD through ayahuasca therapy, and is now dedicated to helping other veterans do the same.

In this podcast, Paul F. Austin, founder of Third Wave and Tucker Max, bestselling author and entrepreneur, discuss the role of psychedelics in processing trauma, empowering individual choice, and guiding personal evolution. You’ll hear about the specific ways that psychedelics help you confront and process trauma, the importance of creating productive relationships with therapeutic substances, and the power of the stories we tell ourselves.

In this podcast, Paul F. Austin, founder of Third Wave, speaks with husband-and-wife team Tom and Sheri Eckert—seasoned psychotherapists, founders of the Oregon Psilocybin Society, and architects of the Psilocybin Service Initiative of Oregon (Yes on 109), a statewide ballot initiative campaign to legalize psilocybin-assisted therapy. Here you’ll find an inside glimpse into their vision to make psilocybin therapy available not just for people with particular mental health diagnoses, but for the general public as well (with some exceptions).

Dr. Joe Tafur M.D. - Integrated Spirituality as a Path to Healing and Wholeness

In this podcast, Paul F. Austin, founder of Third Wave and Dr. Joe Tafur, M.D., integrative family physician, curandero, speaker, and author of The Fellowship of the River: A Medical Doctor’s Exploration into Traditional Amazonian Plant Medicine, chat about the ways in which science and spirituality are intersecting to help heal humanity—a breakthrough he’s exploring through the Modern Spirit Epigenetic Project, an initiative that has seen him join forces with the Multidisciplinary Association for Psychedelic Studies (MAPS) and the University of Southern California (USC) to explore the biological basis of psychedelic medicine and investigate how healing from trauma can alter the way our genes are expressed.

In this podcast, Paul F. Austin, founder of Third Wave and Deanne Adamson, founder of Being True To You Transformational Recovery, have a candid discussion about overcoming addiction, the power of conversion experiences to awaken us to our life’s purpose, and aligning to your heart’s true calling. You’ll also learn about the three stages of psychedelic integration coaching, the importance of shadow work, and the differences between psychedelic coaches, guides, facilitators, sitters, and therapists.

Alexandra Roxo is an author, artist, speaker, mentor, and spiritual guide who has been sharing her heart publicly for nearly two decades. Twelve million people watched her Vice show Life as a Truck Stop Stripper, where she went to work at a truck stop strip club, and which was later adapted into a pilot with executive producer Spike Jonze. Her web series Be Here Nowish was featured in Vogue, The New Yorker, and London Times. She has also supported thousands of women in their journey towards self-embodiment and recently authored the book F*ck Like A Goddess. In this inaugural video podcast, Alexandra and Paul F. Austin, founder of Third Wave, chat about ayahuasca, sexuality, inviting epiphanies through non-resistance, breaking patterns, and facing our shadows.

Dylan Beynon is the Founder and CEO of Mindbloom, an NYC-based mental health and wellbeing startup helping people expand their human potential with clinician-prescribed, guided psychedelic medicine experiences. In this podcast, Dylan chats with Paul F. Austin about old medicine vs. new medicine, centralization vs. decentralization, and transforming lives to transform the world.

In this podcast, Paul F. Austin, founder of Third Wave, speaks with Ronan Levy, Co-founder and Executive Chairman of Field Trip Health. Together, they cover several controversial themes—including the role regulation should play in the psychedelic space, whether FDA approval is required to legitimize psychedelic therapies, the pros and cons of relying on expert evidence, the lifestyle changes suggested for integration, and finding a middle ground between trusting and blaming big pharma.

This podcast features an intellectually orgasmic conversation between Paul F. Austin, founder of The Third Wave, and Louie Schwartzberg, the award-winning producer, director, and cinematographer responsible for the breakaway film, Fantastic Fungi. Tune in to hear what they have to say about the creation and grassroots promotion of Fantastic Fungi, the power of a personal mycelial network to bring people together, the role of the back to the land movement, finding wonder and awe, and growing your own tomatoes.

Tania de Jong AM is a trail-blazing Australian soprano, global speaker, and award-winning social entrepreneur who has developed five businesses and three charities—including Mind Medicine Australia, which supports psychedelic-assisted psychotherapy for the treatment of mental illness. In this wide-ranging podcast, she and Paul F. Austin talk about mental health, surviving trauma, the mind-altering power of music, catapulting into the cosmos with psychedelics, kangaroos, and folding umbrellas.

Dr. Julie Holland—a psychiatrist specializing in psychopharmacology and author of the recently-released book, Good Chemistry: The Science of Connection From Soul to Psychedelics—riffs with Paul F. Austin on oxytocin, music, death, and using psychedelics to activate our parasympathetic state of being. Get ready for a ride that covers topics ranging from The Very Hungry Caterpillar to MDMA, cannabis, and PTSD.

Dr. Molly Maloof—physician, nutritional consultant, and popular speaker—chats with Paul Austin on how to boost our immunity and foster neuroplasticity through psychedelics, meditation, and healthier lifestyle choices. Tune in to discover some steps you can take to improve your physical and mental wellbeing as you navigate the current period of uncertainty and heightened anxiety.

Peter Corbett, retired founder and Buddhist practitioner, joins Paul Austin to discuss the intersection of start-ups, success, and spirituality. Peter traversed the start-up road for the past ten years, bootstrapping his digital agency to a multi-million dollar exit. Listen in as Peter explains why his search for money, status, and achievement led to a developmental dead-end - and how his perspectives changed from intentional plant medicine use.
See More
Comments (9)

Good podcast until the guest started shitting out her cliches on feminist victimhood.

I usually don’t comment negative statements, but the audio quality is awful. I’m having to end this episode at the 27 minute mark despite being interested in the interview. Disappointing.

Yes! the ones on top want to remain on top and we dont need any of it. its harming us as a species #thevenusproject

One of my favorite talks. Twice now I've listened to this podcast and got just as much as the first time I heard it. Definetly feel coming back to this one is a great reminder on how to integrate the information received during my journeys.

Great talk. Thank you. Hope to see you in November :)

when a feminist start talking about there being no difference between men and women: I need to use the restroom, which one was it again? (right door: bla, left door: bla bla bla bla bla)