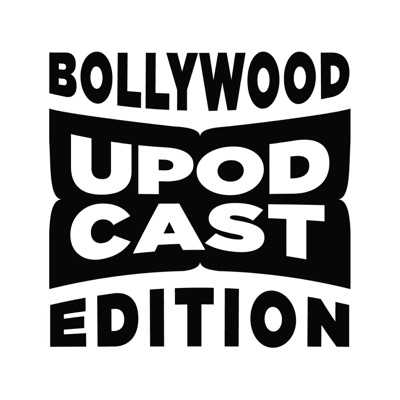 Upodcast- Bollywood Edition
Probably the longest running Bollywood Podcast in the world!
Bollywood film reviews, the largest collection of interviews with your favourite stars on any podcast and filmy debates.
85 Episodes
Reverse 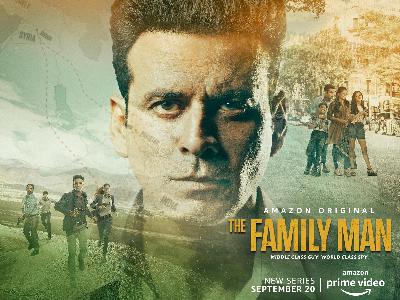 This episode we have a chat with one half of the writer, producer, director duo Raj and DK. You might know their work be it Shor In the city, Go Go Goa Gone, Happy Ending or Stree. Their new show "The Family Man" which is now streaming on Amazon Prime and stars Manoj Bajpayee, Priyamani and Gul Panag about 'a middle class guy but a world-class spy’ We talk about: The challenges of critical praise vs audience appreciation The state of streaming Indian content and its challenges The topic of terrorism and how it can be triggering (I also spend some time requesting "A Gentleman" sequel)   If you like our chat do subscribe and review us on iTunes. And for all our new listeners check out our other show called The Khandaan Podcast by searching on iTunes or by clicking here (https://audioboom.com/channel/the-khandaan-podcast) .   We’re also giving away some awesome Movie merchandise from the forthcoming movie WAR starring Hritik Roshan and Tiger Shroff, check out how you can win in the shownotes or on our social media feeds. You can enter the YRF's "War Give Away" by dropping us an email on upodcasting@gmail.com (mailto:%20upodcasting@gmail.com) and letting us know if you are #TeamTiger or #TeamHritik extra points if you send us a screenshot of the iTunes review you have written for us. (This is for UK only) Alernatively you can head over to Kenz-Now (https://www.kenz-now.com/) for pretty cool give away's and sign up, click here (https://www.kenz-now.com/campaign/win-a-war-exclusive-movie-merchandise-jacket-and-t-shirt/) Find us on Apple Podcasts (https://itunes.apple.com/gb/podcast/upodcast-bollywood-edition/id1363076296) ! and Stitcher (http://www.stitcher.com/podcast/upodcast-bollywood-edition?refid=stpr) ! and AudioBoom (https://audioboom.com/channel/upodcast--bollywood-edition) ! and iHeartRadio (http://www.iheart.com/podcast/270-Upodcast-Bollywood-Edition-29185150) ! and Spotify (https://open.spotify.com/show/67M7dSZ5lGavuPoI7IcL3n) ! and CastBox (https://castbox.fm/channel/Upodcast-Bollywood-Edition-id1213300?country=us) !   Follow us on Twitter (https://twitter.com/UpodCast) ! Like us on Facebook (https://www.facebook.com/upodcasting/) ! Ep 240- "The priviliged have to question the priviliged..." Anubhav Sinha talks Article 15

This episode we had the opportunity to speak with director Anubhav Sinha whose new film Article 15 is having it’s worldwide premier at the London Indian Film Festival tonight – 20th June. It is on general release next week and it stars Ayushmann Khurana, Mohammad Zeeshan Ayub, Sayani Gupta and Isha Talwar. We talk about: Global politics The horror's of casteism in India   The mistakes of Ra.One  Why he didn't cast Muslim actors in Mulk Head over to London Indian Film Festival (http://londonindianfilmfestival.co.uk/) for more information about screenings and locations If you like our chat do subscribe and review us on iTunes. And for all our new listeners check out our other show called The Khandaan Podcast by searching on iTunes or by clicking here (https://audioboom.com/channel/the-khandaan-podcast) . Find us on Apple Podcasts (https://itunes.apple.com/gb/podcast/upodcast-bollywood-edition/id1363076296) ! and Stitcher (http://www.stitcher.com/podcast/upodcast-bollywood-edition?refid=stpr) ! and AudioBoom (https://audioboom.com/channel/upodcast--bollywood-edition) ! and iHeartRadio (http://www.iheart.com/podcast/270-Upodcast-Bollywood-Edition-29185150) ! and Spotify (https://open.spotify.com/show/67M7dSZ5lGavuPoI7IcL3n) ! and CastBox (https://castbox.fm/channel/Upodcast-Bollywood-Edition-id1213300?country=us) !   Follow us on Twitter (https://twitter.com/UpodCast) ! Like us on Facebook (https://www.facebook.com/upodcasting/) ! #Article15 #AyushmannKhurrana #RaOne #AnubhavSinha #SRK #Mulk #Bollywood #BollywoodPodcast This episode we’re talking to Parineeti Chopra who is starring with Akshay Kumar in this week’s Hindi release Kesari. Kesari is about The Battle of Saragarhi in 1897 between Sikh soldiers of the British Indian Army and Pashtun Orakzai tribesmen. Parineeti’s debut was in 2011 with Ladies vs Ricky Bahl and her career has seen some ups and down which we discuss in our chat. We talk and about her likeability as an actor, if she pushes back against that image and if that sense of familiarity can turn toxic. We also talk about why she wanted to be part of Kesari and the sudden prevalence of historical movies being made in India lately. If you like our chat do subscribe and review us on iTunes. And for all our new listeners check out our other show called The Khandaan Podcast by searching on iTunes or by clicking [here](https://audioboom.com/channel/the-khandaan-podcast). Ep 238- Reema Kagti and Alankrita Shrivastav Interviews- Made In Heaven

Made in Heaven is the new Amazon series from Excel Entertainment. Written by Zoya Akhtar and Reema Kagti, this critically acclaimed miniseries follows two wedding event planners in glitzy, high society Delhi as they battle their personal demons while simultaneously serving as front row audience to some of the most deep-rooted problems facing Indian society. It’s rich people behaving badly - in a recognizably Indian way. This episode features two interviews: one with Reema Kagti and another with co-creator Alankrita Shrivastav, where we spoke about the challenges of long form narration, the democratization of streaming platforms and how to create content when freed from the shackles of Box Office and censorship. Keep an eye out for a teaser from [our Khandaan channel](https://audioboom.com/channel/the-khandaan-podcast) where the hosts reviewed Made in Heaven (available now!) You can find these really cool talks and more on our Upodcast Bollywood Edition feed, along with all our interviews with Bollywood celebs. Do subscribe if you haven’t yet. Timeline 01.20 Interview with Reema Kagti 19.05 Teaser for Khandaan’s review of Made in Heaven 20.40 Interview with Alankrita Shrivastav Shownotes: [Reema Kagti Director of Talaash Interview Upodcast](https://audioboom.com/posts/6728911-reema-kagti-director-of-talaash-interview-upodcast) On this episode of Upodcast Bollywood Edition we talk to director Shelley Chopra Dhar about her about the first commercial female queer love story in Hindi cinema, Ek Ladki Ko Dekha To Aisa Laga. We speak about the marketing of the movie, the challenges of making a movie as a first time director surrounded by veterans as well as the challenges of making a queer love story. We also get into some spoilers about key images and themes. Ek Ladki Ko Dekha To Aisa Laga is currently playing in UK theaters , it stars Sonam Kapoor Ahuja, Anil Kapoor, Rajkummar Rao and Juhi Chawla and is directed by Shelley Chopra Dhar. You can watch the trailer by clicking [here](https://www.youtube.com/watch?v=pKcamCgBvMo&t=31s). Our awesome theme song was created by mash up king Dj Shai Guy! Follow him on Bombay Funkadelic Facebook page or twitter so you can attend his unforgettable Bollywood parties all around the UK as well as his awesome mash up mixes that are regularly featured on BBC Asia.

Together with [Josh Hurtado](twitter.com/hatefuljosh) and [Omar Ahmed](twitter.com/bressonian), we discuss the line up for this year's London Indian Film Festival. The 9th edition of the Bagri Foundation London Indian Film Festival,  runs at 15 cinemas, across London, Birmingham and Manchester, from 21st June to 1st July, with 27 films, including features and short films, in competition. It is the largest South Asian film festival in Europe. Buy your tickets via this website, at respective cinema box offices: http://londonindianfilmfestival.co.uk/ We catch up with [Asim Abassi](https://twitter.com/illicitusproduc?lang=en) director of the Pakistani film Cake releasing in UK theaters on the 29th of March. [Asim](http://www.twitter.com/asimburney) talks to Asim if there is an actual revival of Pakistani cinema, claiming a cinematic identity and “gola-ganda” cinematography. Subscribe to our new feeds and share if you like what you hear! If you haven't seen it yet, [click here](https://youtu.be/cr96skoXSuM) for the trailer for Cake! Ep 234: “Parts like these aren’t written for women in India” – Richa Chadha talks Fukrey Returns - Upodcasting- Under Promise Over Deliver

This week’s episode is filled with tons of goodies! We speak to the amazingly talented Richa Chadha about Fukrey Returns which is the Hindi theater release from last Friday. I do keep mistakenly calling the movie “Fukrey two” which is not the name of the movie- my bad! We talk about: Shooting and fun on […] This episode we speak to the luminescent Mahira Khan about her movie releasing in theaters today, Verna. We recorded the interview last week, before the controversy surrounding the release became big news, but glad to hear everything seems to be sorted out and people can go out and watch the movie everywhere. Mahira talks about: […] Ep 231 My Pure Land Review - Upodcasting- Under Promise Over Deliver

British-Pakistani director Sarmad Masud’s t MY PURE LAND is this week’s Upodcast Review and it was also announced as Britain’s selection for submission to the Academy Award® in the category of Foreign Language Film . Based on true events, My Pure Land has been described as a Pakistani western, to break it down for our […] EP 230: “Woman Need to be their Own Heroes” Taapsee Pannu Talks Naam Shabana - Upodcasting- Under Promise Over Deliver

This is one from the secret Upodcast vault! We spoke with the wonderful Taapsee Pannu during the release of Naam Shabana but never managed to post the episode. Since we talk a little about Judwaa 2 and the release is around the corner, what better time to than now to put our conversation up! In […] This week’s Upodcast review is for Hotel Salvation (Mukti Bhavan) which came out last year in India, has been cleaning up awards at film festival and now is getting a UK release through the BFI. We are joined by the always-entertaining Shah Shahid from the Splitscreen Podcast and Blankpage Beatdown. This episode we talk about: […] We spoke to Shubhashish Bhutiani, director of Hotel Salvation (Mukti Bhavan), at the London Indian Film Festival just before his UK festival premier. The movie is releasing this week through the BFI in the UK so it was the perfect time to post this interview. We talk about: Opening night at LIFF How to get […] On this week’s episode of Upodcast, we are talking to Bhumi Pednekar who is starring in Toilet Ek Prem Katha with Akshay Kumar, which is releasing in theatres this FRIDAY. We talk about to Bhumi about: Game of Thrones and her love of the show The issues that Toilet deals with Melding a romantic story […] The London Indian Film Festival (LIFF), regarded as Europe’s largest Indian film festival returns for its 8th edition to London and Birmingham and we are joined by Josh Hurtado from Screen Anarchy to help us navigate through broad choice of movies. On this episode, we pick out the movies that excite us or intrigue us. […] EP 223: Baahubali 2 The Conclusion Review - Upodcasting- Under Promise Over Deliver

This week we review Baahubali 2 The Conclusion also known as the most successful Indian movie every to be released. And for this mammoth task we have brought in the most knowledgeable and best online voices to dissect this breaker of records. On ep 223 we are joined by Sujoy (aka @9e3k), Amrita Rajan (@amritaIQ) and […] We were lucky enough to attend the UK press junket for what was supposed to be the UK premiere of Baahubali The Conclusion with director SS Rajamouli in attendance. Since the movie had already released and is a massive success we had the opportunity to dig in a little deeper about the movie and it’s […] We’ve got a jam-packed show today and not only because of the amazing roundtable of guests we’ve put together. After all a Shahrukh Khan movies needs the best of the best of bollybloggers to come together (of course we’re not including Asim to that list) This week we are joined by Amrita, Beth and Sujoy […]