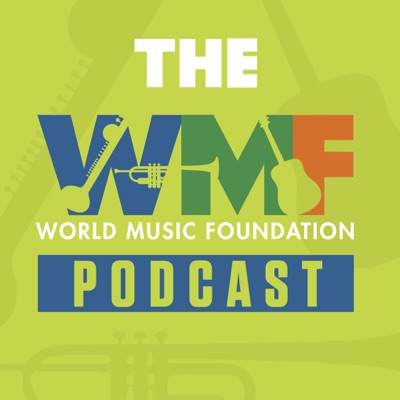 The goal of this show is simple: opening minds through Music!

We bring you interviews with world-renowned musicians from every part of the globe, as well as our own explorations of musical styles, instruments, and artists. If you believe, like us, that open ears = open minds, then come with us into broader horizons!
17 Episodes
Reverse

In this week’s episode John meets with American rapper and prolific creator, Che “Rhymefest” Smith to discuss Hip-Hop, his upcoming album, and Hollywood acting debut, along with topics ranging from Chicago’s youth, spirituality, various life changing trips around the world, and much more. Rhymefest's upcoming album is titled Love Lessons Part 1, and as you'll hear in this conversation, Love is a topic at front of mind right now for Che. This episode also includes the world-premier of an amazing track from the upcoming album, featuring Black Thought (aka Tariq Trotter of The Roots) & Raheem DeVaughn. Rhymefest has won multiple Grammys, a Golden Globe, and an Academy Award, but as he says: that stuff you can just Google; in this conversation he goes much deeper.

This week's episode takes us to Nashville, TN, USA where John visits Weirdo Workshop, the music label and creative headquarters for our guests, Louis York, to speak with them about their new album and everything that's brought them to this point in their careers. Louis York is the powerful duo and creation of multi-GRAMMY nominated songwriting and production team, Claude Kelly and Chuck Harmony. Kelly, a 4x Grammy Award nominee, and Harmony, a 3x Grammy Award nominee and 2011 NAACP Image Award winner, both together and apart have written and produced hits for a long list of multi-platinum recording artists including Rihanna, Bruno Mars, Miley Cyrus, and Whitney Houston to name a few. Their debut album is titled American Griots and it's a sonic adventure that's deserving of their incredible backstory.

Self-proclaimed "crazy, romantic musician", Roberto Fonseca, speaks with John about his recently released 9th solo album, Yesun, along with the life experiences and musical training that have brought him to this point in his musical journey. Roberto is a GRAMMY nominated, Cuban pianist, multi-instrumentalist, composer, producer and bandleader, and on this album he experiments with a wide range of musical forms, from jazz and classical music to rap, funk, reggaeton and electronic music. Roberto also talks about his tenure with the Buena Vista Social Club and how traveling the world with these masters of traditional Cuban music forever changed his approach to music making.

Femi Kuti: Afrobeat Legend And Concerned Citizen Of The World

Jess Sah Bi & Peter One, musicians from Côte d'Ivoire in West Africa, recall hearing the harmonies and guitars of Simon and Garfunkel and Cat Stevens for the first time and how that impacted their music from that point onward. In our conversation they take us through the creation of their landmark African-Country-Folk inspired album Our Garden Needs Its Flowers from their initial search for a producer to now the recent reissue, 30 years later, by Awesome Tapes From Africa.   Here’s an external link to every Musical Mention in this episode: 7:01 Simon & Garfunkel 7:08 Cat Stevens 8:19 Jimi Hendrix 8:29 The Beatles (Hey Jude, Let It Be) 9:49 Paul Simon 11:29 James Bond Theme 14:53: Amédée Pierre 15:00 Bob Marley (No Woman No Cry) 18:19 Don Williams 20:51 Don Williams 20:42 Alpha Blondy 25:14 Premiere Chance 30:47 Rosemary Gurg ?? 33:11 Badmos 33:19 Ernesto Djedje 31:51 Georges Tai Benson 36:27 Monique Séka 36:39 Anet Roger 40:08 Gouro 40:27 Our Garden Needs Its Flowers (album) 41:03 Burkina Faso 41:04 Togo 48:50 Brian Shimkovitz

Pamyua: The Most Famous Inuit Band In The World

Pamyua’s musical footprint, spanning two decades and several countries, is a testament to the ongoing vibrancy of Inuit music, the group members, and their unique heritage. Brothers Phillip and Stephen Blanchett speak from the heart on issues of identity, culture and music expressed through Pamyua (pronounced bum-yo-ah) with collaborators Ossie Kairaiuak and Karina Moeller. They are preservers of an amazing musical tradition that is still alive but has historically been marked for extinction and continues to face the threat of becoming lost to this day.   Here’s an external link to every Musical Mention in this episode: 0:20 Pamyua 2:15 Yupik/Inuit Music 5:07 Karina Moeller 5:20 Inuit 6:15 World Music 7:02 Reggae 7:03 R&B 10:14 Russian Orthodox Church 10:55 Slavic songs 11:11 Yukon Kuskokwim Delta 11:15 Nunapitchuk 13:24 Lady Smith Black Mambazo 15:05 Soul 15:06 Rap 15:07 Hip Hop 16:12 Folk 16:13 Country 16:20 Indigenous 19:45 Wild Tchoupitoulas 19:52 Aaron Neville 22:57 Yupik Mask Dancing 28:48 Cauyaq (drum) 33:01 Side A, Side B 36:40 Yupik Langauge 36:41 Inupik Language