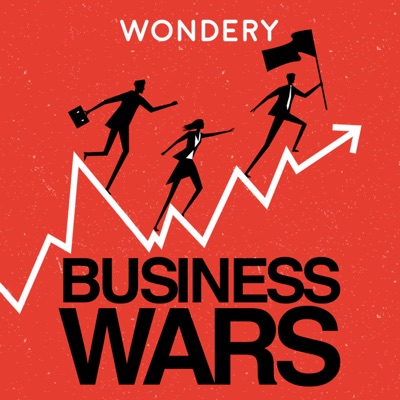 Netflix vs. HBO. Nike vs. Adidas. Business is war. Sometimes the prize is your wallet or your attention. Sometimes, it’s just the fun of beating the other guy. The outcome of these battles shapes what we buy and how we live.

Business Wars gives you the unauthorized, real story of what drives these companies and their leaders, inventors, investors and executives to new heights -- or to ruin. Hosted by David Brown, former anchor of Marketplace. From Wondery, the network behind Dirty John and American History Tellers.

Netflix-HBO. Nike-Adidas. Business is war. Sometimes the prize is your wallet. Sometimes your attention. Sometimes just the fun of beating the other guy. From Wondery, the network behind Dirty John and American History Tellers.

Host David Brown interviews Steven Johnson, the host of the new podcast American Innovations.Support us by supporting our sponsors!

COVID-19 has flipped the economy on its head. But the pandemic’s new normal has also created new opportunities. Against all odds, some businesses are actually thriving -- and we’re not just talking about streaming companies. Today we bring you a roundup of some of our favorite recent stories from our weekday news podcast, Business Wars Daily. Listen ad-free on Wondery+ hereSupport us by supporting our sponsors!

Subscribe today: http://wondery.fm/Jacked_WonderyHosted by Golden Globe winner Taraji P. Henson. Have you ever had a dream? Something you wanted so bad you just couldn’t let it go? For a group of kids in Harlem in the Eighties, their dreams would change pop music forever. Teddy Riley, Timmy Gatling, and Aaron Hall form a group called Guy that would fuse hip-hop and R&B and launch a new sound. By the early Nineties, the New Jack Sound dominated the pop music charts: Bell Biv Devoe, Bobby Brown, Boyz II Men, and many more. But the rise of the New Jack sound would come at a cost, and not everyone would make it to the top. From Wondery and Universal Music Group, Jacked is a story of friendship, gangsters, double-crosses, and big dreams.

Why Black Friday Will Look Different This Year | 5

Black Friday, the busiest shopping day of the year, will break the mold this year, as the pandemic sends retailers scrambling for new ways to bring in customers while minimizing large crowds. But the changes to American shopping habits predate the pandemic. Host David Brown talks with Business Insider retail correspondent Madeline Stone about what to expect from a COVID Christmas and which changes to our spending habits are likely to stick. Listen ad-free on Wondery+ here

In Wondery’s newest series, Business Movers, host Lindsay Graham dives deep into the inner workings of some of the most successful companies of all time. From the origin stories of their famed leaders to the million dollar idea that catapulted them to success, how exactly did these companies grow from an idea and a dream to multi-billion dollar corporations? Hear the landmark decisions, the scandals, and the stunning triumphs that made them who they are. First up: Walt Disney. Listen at wondery.fm/business_movers.

Lewis Howes is a New York Times best-selling author, 2x All-American athlete, keynote speaker, and entrepreneur. The School of Greatness shares inspiring interviews from the most successful people on the planet—world-renowned leaders in business, entertainment, sports, science, health, and literature—to inspire YOU to unlock your inner greatness and live your best life. Click to listen to School of Greatness: wondery.fm/SOG

Wondery Presents: Against The Odds

In July 2018, 12 youth soccer players and their coach found themselves trapped 6 miles deep in a cave with no food or water and depleting oxygen. The rock formed maze became almost completely submerged as the water rose to levels nearly impossible for survival. There was no light and no way to communicate with the outside world. The first season of Wondery’s new original series Against the Odds takes you into the incredible events of when an adventurous group of teens found themselves fighting to save their lives, and the brave heroes that gave them their only chance at survival. With step by step recounts, experience for yourself what it was like to be in their shoes, and how they survived against the odds. Listen to Against the Odds at wondery.fm/ATO.

This is Episode 1 of an 8-part series on the brutal business battle between Netflix and Blockbuster, and later HBO.It all started around 1997, with a guy named Marc Randolph and his mathematician friend Reed Hastings. Randolph and Hastings knew they’d have to take on Blockbuster, but what they didn’t anticipate was that their business model would take on network television and eventually change the entire movie industry.This was an 8-year total war that left innumerable casualties in its wake: thousands of hollowed out buildings and economic losses in the billions.Support us by supporting our sponsors!

After Hastings pleaded with Antioco to buy Blockbuster Online, Antioco agreed to present Hasting’s proposal to the board. What he didn’t tell him was that he was pushing the board to reject the offer so Netflix would wither and die. Meanwhile, Netflix was struggling to gain legitimacy in Hollywood. Netflix quickly realized that before it could take on the Hollywood gods, it would have to slay Blockbuster.Support us by supporting our sponsors!

Thinking like your enemy is the best way to beat them, and during the war, Blockbuster tried every trick in the books to get inside Netflix. Sometimes they succeeded - sending “housewives” into warehouses as spies, and sometimes things didn’t go as planned. But when Blockbuster did deliver, they delivered big. They threw everything they had at Netflix, but the war raged on.Support us by supporting our sponsors!

Netflix vs Blockbuster - The Digital Divide | 4

You know that expression “content is king”? Well it turns out, sometimes it’s not. Sometimes it’s a hard-working algorithm that burrows into customer habits and viewing patterns. With that, Netflix had a clear upper hand on Blockbuster.That, and the fact that Netflix targeted this new “streaming” technology that in 2007, no one really believed in. Soon they were on top of the world.But it’s dangerous being on top. If you trip, you have a long way to fall.Support us by supporting our sponsors!

Netflix vs Blockbuster - HBO Gets In The Ring | 5

We take a step back to explore how a little company called Home Box Office went from serving B-movies to 325 homes in Wilkes Barre, Pennsylvania to become the juggernaut that we know as HBO. In the process, HBO, become the standard by which all other cable companies would have to measure themselves - after all, it's not TV. It's HBO.Support us by supporting our sponsors!

Hollywood execs thought Netflix was crazy to give up advertising and spin off opportunities by letting viewers flop on a couch and watch a whole season of a show all at once. But Netflix knew it was on to something. All of their studies and focus groups revealed something new: viewers who binged content formed an emotional attachment to Netflix. Support us by supporting our sponsors!

Netflix vs Blockbuster - The Way We Watch | 7

Netflix goes from being a streaming company to a movement in which consumers all over the world decide what show to watch -- and when and how they watch them. The future that Reed Hastings and Marc Randolph envisioned two decades earlier has arrived. The unfettered reign of cable television has ended. The war for streaming viewers will become richer. And more cutthroat.Support us by supporting our sponsors!

Rich Greenfield is a tech and media analyst with BTIG who’s been covering this battle in some capacity for decades. We had the chance to talk to him in depth on today’s episode.Follow Rich on Twitter @RichBTIGSupport us by supporting our sponsors!

In 2015, Kanye West turned his back on Nike, an all out battle in the ongoing war for sneaker supremacy. Nike and Adidas are two multinational companies worth billions in an industry estimated to be valued at $220 Billion by 2020 (which is double the GDP of Ukraine) but that begs the question - Why are companies sinking so much money into mesh and rubber for your feet?In this series of Business Wars, we'll find out. This is Episode 1 of a 7-part series on the brutal business battle between Nike and Adidas.Support us by supporting our sponsors!

Nike vs Adidas - The Starting Line | 2

Rudi and Adi Dassler started the “Dassler Business” in the 1920s in their parent’s garage, recycling materials from WWI military gear and uniforms. They got a pair of their track spikes on an athlete named Jesse Owens at the 1936 Olympics and the company took off… until WWII.The war may have been over for Germany, but the rivalry between Adi and Rudi was just heating up.Rudi left to start his own company, Puma, and Adi created Adidas.50 years later, with a waffle iron and inventory from Onitsuka Tiger, Phil Knight and Bill Bowerman start tinkering with some shoes in Bowerman’s kitchen. The waffle iron didn’t last long, but the shoes did.Support us by supporting our sponsors!

As long as there have been professional sports, there have been professional athletes, willing to accept money to wear certain brands, but the biggest endorsement deals were only made possible by a mid-20th century invention: the television. Fans realized they could tune in to see their favorite athletes almost any day of the week. Brands realized they just got hundreds of walking billboards showing the capabilities of their athletic gear in action… and it’s a race to see who can reach the world’s best athletes first.Support us by supporting our sponsors!

Every new Nike employee gets a list of principles that serves as the company’s philosophy. One: Our business is change. Two: We’re on offense, all the time.With those principles Nike sprinted from $29 million in revenue in 1973 to more than $850 million by 1983. But the biggest boost for Nike was an up and coming athlete. Like Jesse Owens fifty years before, a young Michael Jordan would carry a fledgling shoe brand to new heights.Support us by supporting our sponsors!
See More
Comments (382)

Extremely good fun. If you want super concise facts and no dramatisation then this isn't for you. But if you want great stories brought to life in a gripping way then I'd highly reccomend it!

You idiots and your ads

the first series feels like it was read for the first time on air. thankfully the subsequent series sound more refined

I liked the different voices of each character.

The last thing we need is the Chinese in space.

I've enjoyed this. Thnk you

David Brown, is my best podcaster so far. Anyone?

Best podcast I’ve come across in a long time

I hope the next series will be about @MercedesBenz VS @BMWgroup

liked everything about the series except the final episode.

I think it should be @tiktok_us VS @snapchat

this is the most idiotic conversation I've listened to in a while. all I hear is another academic attempting to divide by putting a partisan spin on consumerism. your preferred brand of jean is not and never had been a flag of virtue. It's about which brands have the better cut and aren't being sold at supermarkets...

Brings the stories to life in a really entertaining way.

Very interesting podcast. but the female roles voiced by men makes it sound cheaply produced. Is it really that hard to find a woman friend to do the female voices?