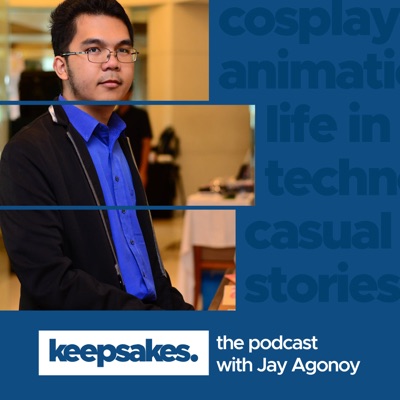 Jay Agonoy shares his thoughts on the things that he's into: From Anime, Pop Culture, Events, Technology and even some of his personal journeys in this thing called life.

We're just 10 episodes short of reaching a hundred episodes released! On this podcast, Red Mendoza of Anime Pilipinas joins me to talk about covering the frontliners and learning from experience, as well as the Ani-One x Mediacorp SG deal and what we can learn from it. 00:00:00 - Start 00:02:29 - On covering the Frontliner Beat 00:10:31 - Learnings from covering events 00:22:47 - Talking about Ani-One and Mediacorp SG deal 00:31:44 - Anime content on over-the-top platforms? 01:23:49 - Parting words --- keepsakes.: The Podcast supports Mr. Speedy - book a delivery now and use the offer code KEEPSAKESMRSPEEDY to get $1 off on your first delivery: http://podlink.co/wgq​ --- Follow Jay and keepsakes. on: Facebook: https://facebook.com/keepsakesbyjay Twitter: http://twitter.com/jayagonoy Instagram: http://instagram.com/jayagonoyxyz Podcast: http://anchor.fm/keepsakes Blog: http://jayagonoy.xyz #keepsakes

On this early release, we have Otakufest 2021 Co-chief Director Ethan Job Bascug with us to discuss how one of the biggest events in Cebu is doing in these times. Otakufest 2021 can be seen on Facebook: http://fb.me/ofest Follow Jay and keepsakes. on: Facebook: https://facebook.com/keepsakesbyjay Twitter: http://twitter.com/jayagonoy Instagram: http://instagram.com/jayagonoyxyz Podcast: http://anchor.fm/keepsakes Blog: http://jayagonoy.xyz

Here's a story: This podcast wasn't supposed to happen if not for this one enthusiastic upcoming VTuber who stumbled upon the voice chat rooms of the VTuber Pilipinas Discord server.  I am joined by yours truly, my man Guro Kahoy (who's reaaally into Philippine history), and Shiro of the LoungeTV team. Consider this as a welcome briefing for Virtual YouTubers, obviously from a simp(leton) like me. Subscribe to Shiro Ch. here: https://www.youtube.com/channel/UCTHdNrMvnpr6kez7kNnJ4Lw VTuber Pilipinas on Discord (NSFW): https://discord.gg/FfM6SE5yyv Follow Jay and keepsakes. on: Facebook: https://facebook.com/keepsakesbyjay Twitter: http://twitter.com/jayagonoy Instagram: http://instagram.com/jayagonoyxyz Podcast: http://anchor.fm/keepsakes Blog: http://jayagonoy.xyz

Our second podcast for the month of March features MaDe-paisen, a.k.a. Matthew Marcelo. He's been coding for so long that when a comment on a Reddit board pissed him off so much, he had built the Good VTuber Subs bot on Twitter. This, among his other projects, shows how he is an "otaku for others." This discussion talks about the recently-held Fandom February as well as the Good VTuber Subs in general. keepsakes.: The Podcast supports Mr. Speedy - book a delivery now and use the offer code KEEPSAKESMRSPEEDY to get $1 off on your first delivery: http://podlink.co/wgq​ Matthew Marcelo / Madekuji-san / MaDe-paisen: http://madekuji.github.io / http://matthewmarcelo.me Fandom February VOD Archive: https://www.youtube.com/channel/UCH-eVHv2FF2Vcm0b_MYLl3w Host / Production / Editing: Jay Agonoy

In this special feature, Jay and Joshua Geronimo (Allineus) talked to Polar, the duo of Ashley Cloud and Faith Shanrae. As the duo turns a new leaf in their careers - not as idols but as artists under OtaCute - what should we expect from them? keepsakes.: The Podcast supports Mr. Speedy - book a delivery now and use the offer code KEEPSAKESMRSPEEDY to get $1 off on your first delivery: http://podlink.co/wgq Polar: Ash & Faith Facebook: http://facebook.com/polarofficialph Instagram: http://instagram.com/polar_official_ph Twitter: http://twitter.com/polar_ash_faith keepsakes.: The Podcast - Episode 86 Host: Jay Agonoy Guest Host: Joshua Geronimo Editing: Joshua Geronimo / Jay Agonoy Special thanks to Ken-san of OtaCute Follow Jay and keepsakes. on: Facebook: https://facebook.com/keepsakesbyjay Twitter: http://twitter.com/jayagonoy Instagram: http://instagram.com/jayagonoyxyz Blog: http://jayagonoy.xyz

On this special two-hour episode: I spoke to my good friends in Indonesia, Halimun Muhammad (Senior Editor at KAORI Nusantara's The Indonesian Anime Times) and Luthfi Suryanda Atmojo (Podcaster, LUTALK / Collaboration Manager, Ghosty's Comic) to discuss Anime, Manga and Japanese Pop Culture in Indonesia. I've been talking about Indonesia on the blog before, so this is a great opportunity and a step forward towards more interaction with one of the largest consumers of Japanese pop culture in Southeast Asia. Timestamps and visuals are available on the video edition over at YouTube.

What makes a VTuber seiso - or seison't? How does a VTuber avoid falling into the pit of being not seiso? What makes a VTuber consistent? I tried to answer those questions with Josh of Allineus Productions. (Jan 08, 2021)  Josh: https://twitter.com/allineus_c

On this last episode for 2020, I talked to Anime Corner's Marlo Barcellano about "Saekano the Movie: Finale,"  and how it caps off a series very well.   I write stories for Anime Corner: animecorner.me YouTube version: https://youtu.be/h4GLc3maqEM

We are now back with our last episodes for 2020! This time, I get to talk with Jovit Ryan, the guy behind Jovs TV and one of the hosts of the Pinoy Cosplay Podcast. Jovs_TV: https://www.youtube.com/channel/UCH7gNSsIOeJl6VybFSD0B3w

It's my birthday last week, and what a way to celebrate it than to talk about MORE Virtual YouTubers. I have with me JM Melegrito of Anime Pilipinas, Sky-desu and Kurt (Kurumeme), my fellow VTuber fans, to talk about their discoveries as well as why gatekeeping exists in the community. Of course, we won't leave the latest plethora of news go unmentioned.

On this episode, Serena of TheLilyCat.com joins me again to talk about Quarantine Food and how it made us survive this pandemic so far. We are sharing our insights on the food we are supposed to eat sparingly, you see.  Follow Jay and keepsakes. on Facebook, Twitter, Instagram or visit http://jayagonoy.xyz.

The Crackdown on Piracy Sites has just started as KissAnime is taken down, leaving the highly-visited website no choice but to say goodbye for good. This puts anime fans who are currently watching by season on a rush to find alternatives.  On this discussion, we round up what's happening with the anime community and what can the industry's producers do to spread the anime culture in amenable ways. Joining me are photographer Donnie Medina of Chiisu Studio, Geoffrey Kutsukawa, and Anime Corner's Marlo Barcellano.  Follow Jay and keepsakes. on: Facebook: https://facebook.com/keepsakesbyjay Twitter: http://twitter.com/jayagonoy Instagram: http://instagram.com/jayagonoyxyz Blog: http://jayagonoy.xyz

For our episode this month, we are joined by wotagei player Hinootora for a discussion on her wotagei journey (including her brief journey on how she got scouted by her current team Senkou Wotagei Dan), as well as her past accolade (whom she credits to our iM@S PH seniors Lor and Louie).   Follow/Subscribe to Hinootora on:  YouTube:  https://www.youtube.com/channel/UCghA_cwepmBqQfNpZMVZXBw Facebook: https://www.facebook.com/hinootora  Instagram: https://www.instagram.com/hinootora/  Twitter: https://www.twitter.com/hinootora/

Just before we reach 80 episodes, I decided it will be the best for the podcast to have its video version - almost everyone's in it these days. Now that the podcast has a face to show on video, we are introducing our first guest for this month's lineup.  Prior to serving real estate clients with her digital marketing skills, most of you may have known Jasteanne Benito as the cosplayer Loli-J. On this episode, we will take a few pages from her book and share to us her life and the lessons she learned along the way.  Video version will be up on YouTube.com/JayAgonoy. Subscribe to the podcast on audio and video and help us continue sharing more keepsakes.

We take a look back at the successful Cebu Hobby Events Organizers' Roundtable held last May 30, featuring Max Qman Maquiling of UNITY Productions and Cebu Esports United, Jomar Joshua of Otakufest, Joshua Varela of Toys and Figures Convention Cebu and Jolu Escaño of ARCHcon Cebu. Journalist Red Mendoza moderated this panel discussion from his home base in Quezon City. This episode was streamed live on Facebook with Streamyard - get started with Streamyard and go live on most social media platforms. Sign up now at https://streamyard.com?pal=5187783270858752 to get USD10 credit.

Podcast 75: In and Out of Cosplay

On this episode, we look back at our third Twitch live with cosplayers Ai Natsumi, Mais Semblante and Diane Marie Sabandeja as we talk about their lives on and off their cosplay careers. Gary Montejo co-hosts this discussion from his home base in Cebu. This episode was streamed live on Twitch with Streamyard - get started with Streamyard and go live on most social media platforms. Sign up now at https://streamyard.com?pal=5187783270858752 to get USD10 credit.

We're not expected to know the truth (or handle it). Take it from me - the deeper we talk about today's pressing matters to find solutions that will satisfy us, the more we don't get it - and with it, more questions come to us. This episode talks about the New Normal and some things that even you can't handle. Joining me is JM Cruz of Project Materia and Stay at Home Podcast, available on Spreaker: https://www.spreaker.com/show/stay-at-home-podcast This episode was streamed live on YouTube with Streamyard - get started with Streamyard and go live on most social media platforms. Sign up now at https://streamyard.com?pal=5187783270858752 to get USD10 credit.

Serena of The Lily Cat gushes for voice actress Junko Iwao more than Sakura Tange, and we learn that there's more to Ayako Kawasumi and Noriko Shitaya than just Fate/. This is your yuri-centric episode, filled with seiyuu references. This episode has been recorded through StreamYard - go Live on Facebook, YouTube, Twitch and even Twitter in just a few clicks. Sign up now at https://streamyard.com?pal=5187783270858752 to get 10$ credit.

On this podcast recorded last April 29, I am joined by past guests CH4U's Tito Natz and Sho (Yumin) to discuss Virtual YouTubers in line with the AsaCoco wave that is hounding me - grassing, if I say so myself - for around a month now since we got into community quarantine. Rants and raves are spread all over for your listening pleasure. Happy June, and keep safe. Recorded through StreamYard - stream to different platforms like Facebook Live, Twitch, LinkedIn and even Periscope all in your browser. Sign up now at https://streamyard.com?pal=5187783270858752 and get USD10 credit.

Episode 71: Community Quarantine Situation in Manila, Cebu and other places

This podcast streamed last April 18 on Facebook Live puts my DTV Pilipinas colleagues Red Mendoza, Kyle Florencio, Dennis Martinez and Cebu's Cosplay Event Buzzer Gary Montejo in a special conversation on the Quarantine Situation in select parts of Metro Manila as well as Cebu. This is the first time we did a live stream through StreamYard. Sign up now and host your broadcast on one of the different platforms available for free: https://streamyard.com?pal=5187783270858752
See More
Comments