Modern Web is a podcast that covers the latest news on topics such as EmberJS, ReactJS, AngularJS, ES2015, RxJS, Functional Reactive Programming, and more.
78 Episodes
Reverse

In this episode, Tracy Lee and Justin Ribeiro talk about how to get started with web performance and things you can do right now as a developer. They discuss devtools released by Microsoft, Mozilla, and Google and what the most productive metrics to focus on are! Guests: Justin Ribeiro (@justinribeiro) - Executive Vice President, Web Platform Engineering @ This Dot  & GDE in Web Technologies This episode is sponsored by KendoReact & This Dot Labs.

Introducing a new season of our Modern Web podcast with a special episode featuring Evan You (@youyuxi), creator & project lead of Vue! Evan discusses why he is so excited about Vue 3, and the differences between how the architecture of Vue 3 differs from other frameworks such as Svelte, Ivy, Ember, and React. He also explains the difference between React Hooks and the Vue Composition API and how the Vue Composition API tries to solve some ergonomic issues that React Hooks has. If you use a bundler like webpack and you’re looking for more speed, you’ll love Evan’s new project, Vite.  Evan explains the problems that Vite is trying to solve for all developers, regardless of if you use Vue, React, Svelte, or Angular. Vite also supports hot module replacement and has a lot of goodies up its sleeve Evan talks about that you should watch out for. Ben and Evan discuss the differences between Snowpack 2 and Vite. This episode is sponsored by This Dot Labs.

S06E20 Modern Web Podcast - Why You Should Consider Learning ReasonML with Peter Piekarczyk, CTO of Draftbit

In this episode of the Modern Web podcast, our hosts, Tracy Lee (@ladyleet) & Ben Lesh (@BenLesh), explore why developers should look to consider learning ReasonML and the benefits of the language with special guest, Peter Piekarczyk (@peterpme). Peter also shares the how Reason works with technologies you may already know like TypeScript and React. This episode also introduces Draftbit, a new low code solution to help developers and designers build mobile apps from within the browser. Guests: Peter Piekarczyk (@peterpme) - Co-founder & CTO of Draftbit This episode is sponsored by Syncfusion & This Dot Labs.

In this episode of the Modern Web podcast, join our our host, Rob Ocel (@robocell), as he sits down with special guests, Moshe Milman (@MosheMilman), Eva Howe (@evahowe), and Chris Whited (@cmwhited) to discuss the the benefits of companies supporting open source!   Guests: Moshe Milman (@MosheMilman) - Co-founder and COO of Applitools Eva Howe (@evahowe) - Operations Manager at This Dot Chris Whited (@cmwhited) - Senior Software Engineer for This Dot Labs   This episode is sponsored by Syncfusion & This Dot Labs.

In this episode of the Modern Web podcast, our host, Rob Ocel (@robocell), discusses mentorship with Ray Gesualdo (@RayGesualdo). Guests:Ray Gesualdo (@RayGesualdo) - Staff UI Engineer, SalesLoft Topics discussed: - What has mentorship meant to our careers- What is mentorship and how does it differ from things like sponsorship or instruction?- Is it really that hard to start mentorship at your company? What does it take to start a mentorship culture?- Why the ability to be open, vulnerable, and honest is critical to a successful mentorship relationship- How do you pick a mentor? What should someone look for in a mentor? What should mentors look for from their mentees?- Why companies and senior developers need junior developers to advance their own careers and solve for their blindspots.- How important is it to solicit feedback from others? How do you act on that feedback? How do you better ask for feedback?- The importance of listening in mentorship relationship and not trying to just "solve" things, and how to work around that as a mentor- How to negotiate boundaries in mentorship relationships and navigate the power imbalance- Can someone be junior to mentor?- How do teams where all developers are considered peers set up successful mentorship programs? Do all mentor relationships need a senior and a junior?- What is radical honesty, Radical Candor, and ruinous empathy? How to be empathetic but also deliver hard truths and actionable feedback This episode is sponsored by NativeScript & This Dot Labs.

In this episode of the Modern Web podcast, our host, Rob Ocel, speaks with Alex Castillo about NeuroJavaScript. Guests: Alex Castillo (@castillo__io) - Co-founder @ Neurosity Topics discussed: - What is Neural JavaScript, neuroimaging, and how do they relate?- How can this technology help with increase the accessibility of our sites/technology?- What is the Notion device that Neurosity created? How does it work?- How does the Notion device separate intentional thoughts to operate interfaces from other thoughts we might have at any point in time?- What are the limits of these types of technology? Can it really read your thoughts?- What is the Notion SDK and how can you use this technology in our code?- What are intents and how do app authors develop new intents or map to existing known intents?- How does the SDK help app authors glean meaningful insights without being experts in neuroscience?- How does Neurosity protect user privacy? How important is privacy and ethics with this type of technology?- If people are interested, how can they learn more about the science of this technology? How can they learn more about Neurosity and the Notion device? How can they get involved in the SDK development? How can they get involved in the community around this technology and science?   This episode is sponsored by NativeScript & This Dot Labs.

In this episode of the Modern Web podcast, our host, Tracy Lee, speaks with Amal Hussein and Jory Burson about the web platform.     Our Guests: Amal Hussein (@nomadtechie) - Software engineer at Bocoup Jory Burson (@jorydotcom) -Open Source & Standards Liaison at Bocoup Education   This episode is sponsored by NativeScript & This Dot Labs.

In this episode, we speak to Node mentors and mentees about the Node mentor program, an ongoing program focused on helping get more contributors into the Node ecosystem.   Our Guests: Ahmad Bamieh (@ahmadbamieh), Software Engineer at Elastic who leads the mentor program Benjamin Coe (@benjamincoe), Developer Programs Engineer Google and Node Collaborator Jennifer Bland (@ratracegrad), SSR at Stanley Black & Decker Princiya Sequeira (@princi_ya), Lead front end engineer at smartHelios   Topics covered: - What is the mentor initiative? - What have been the experiences you went through as a mentor and mentee? - How do you get involved in mentor program? - What are the metrics of success that you track for this? - What advice do you have for mentees to get the most out of a mentorship? - What can mentors do to facilitate a great mentor program?   This episode is sponsored by NativeScript & This Dot Labs.   LINKS: https://princiya777.wordpress.com/2018/09/09/node-js-diagnostics/ https://www.youtube.com/playlist?list=PLjJlQgygxY7e_7FMBvkUFkUwIPC5vg5OL https://medium.com/the-node-js-collection/how-i-got-into-node-jennifer-bland-3060d02654b3 https://medium.freecodecamp.org/contributing-to-open-source-is-not-hard-here-is-my-journey-to-contributing-to-nodejs-d10760e31194 https://princiya777.wordpress.com/2018/10/14/node-js-mentorship/

In this episode of the Modern Web podcast, Tracy Lee speaks with Nate Hunzaker and Philipp Spiess, two members of the React DOM team. Topics covered: REACT HOOKS What is hooks? Should you use it? Is it critical to your upgrade path for react? Are developers starting to refactor their applications to use hooks? Are hooks easier to learn than the class API? How does this change people learning react for the first time? COMMUNITY Rachel Nabors joins the react core team REACT LAZY AND REACT SUSPENSE Code splitting with react.lazy(); and react.suspense REACT FIRE How can you get involved, what is it, and what should you be expecting? REACT DEVTOOLS Devtool updates : react.warn() and react.error() DOCUMENTATION Documentation localization efforts - get involved! For more podcasts, visit https://www.thisdot.co/modern-web This episode is sponsored by NativeScript & This Dot Labs.

In this Modern Web podcast, Rob Ocel and Jake Dohm speak about the Vue.js latest updates with Chris Fritz, a Vue Core Team member. Topics Covered:- What's new in Vue 2.6? - The new V-slot directive- The news Dynamic Directive arguments. Now we can have Dynamic event name and dynamic attribute bindings.- Why the core team prefers to write templates.- Backwards compatibility in Vue.- Differences between big releases like the upcomoing 3.0 version and 2.x versions.- Migration to newest versions. Migration guides. Documentation- The development process that the core team follows.- How the core team tries to hear their users and open the discussions.- Typescript in Vue- Vue 3.0: what changes it brings.- Vue 3.0 performance: why is half the size and twice as fast than prior version. This episode is sponsored by NativeScript & This Dot Labs.

In this modern web podcast, Rob Ocel and Tracy Lee speak to Tanmai Gopal and Uri Goldshtein about GraphQL. Uri Goldshtein - Founder The Guild -@UriGoldshteinTanmai Gopal - Founder @Hasura - @tanmaigoTracy Lee - @ladyleetRob Ocel - @robocell Topics covered:Why is GraphQL exploding in popularityWhy GraphQL isn't a fadHow to get started with GraphQLWhat are the full-stack benefits of GraphQLHow to sell GraphQL to your teamHow to migrate to GraphQLWhat happens to clients that still use your REST APIsHow does GraphQL help front-end component-based architecturesHow can GraphQL help with real-time dataHow can you get involved in the GraphQL community Show Notes:Immutable User Interfaces (Lee Byron) - Full Stack Fest 2016https://www.youtube.com/watch?v=pLvrZPSzHxo https://github.com/chentsulin/awesome-graphql This episode is sponsored by NativeScript & This Dot Labs.

S06E1 What is AMP and why you should care with Tracy Lee, Rob Ocel, Ben Morss, Prateek Bhatnagar, and Kristofer Baxter

Welcome to another Modern Web podcast! In this episode, Tracy Lee and Rob Ocel will be talking with the AMP team about Accelerate Mobile Pages, an open-source library created by Google that to make publishing websites easier than ever. Ben Morss, Prateek Bhatnagar, and Kristofer Baxter will be our guests in this discussion. We talk about PWA, a11y, performance, AMP with frameworks, AMP Script and upcoming releases. Notes: - The AMP Project is an open-source initiative aiming to make web performance better. The project enables the creation of websites and ads that are consistently fast, beautiful and high-performing across devices and distribution platforms. -AMP pages are just web pages that you can link to and are controlled by you. It focuses on giving the best experience to your users, loading near instantaneously and performing great in mobiles devices. -AMP builds on existing features and you can render it with user agents you already have set. AMP official website: https://www.ampproject.org/ This episode is sponsored by NativeScript & This Dot Labs. 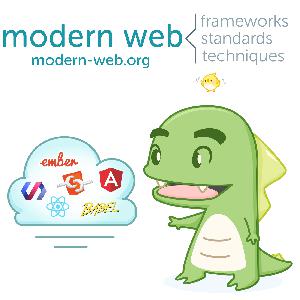 In this Modern Web podcast, Tracy Lee (@ladyleet) and Rob Ocel (@robocell) interview Dominic Farolino (@domfarolino) about his adventures in getting involved in browser standards and how others can get involved too. Dominic Farolino is a WHATWG Standards Editor, Chrome Committer, Student and Software Engineer. Topics covered: - Actually getting involved - how do you do that? What is the process? - What is the difference between the different standards bodies?- How do you get started and why should you choose to contribute to W3C, WHATWG, or TC39?- How do standards bodies work together?- Observable proposal

In this modern web podcast, Tracy Lee speaks with 2 core team members of the Angular team - Hans Larsen who leads the CLI team and Ben Lesh, author of RxJS. Notes:- Ivy is the biggest focus on the Angular team currently. Ivy is almost done and will make things smaller and tree shakeable.- Hans is focused on schematics - a library to help you build and generate work flows. - CLI - Bazel support is a focus right now to make the CLI faster- Ng update is a smarter way to update dependencies across major versions - it will refactor your project to remove breaking changes and fix breaking changes so you won’t see something is breaking. Topics Covered:- What does schematics enable?- What is ng add and ng update and how are people using them?- What is the future of the CLI?- Angular console You can follow Tracy Lee on twitter @ladyleet, Hans Larsen @hanslatwork, and Ben Lesh @benlesh.
See More
Comments (1)

is the whole episode uploaded? cz it cuts off midway