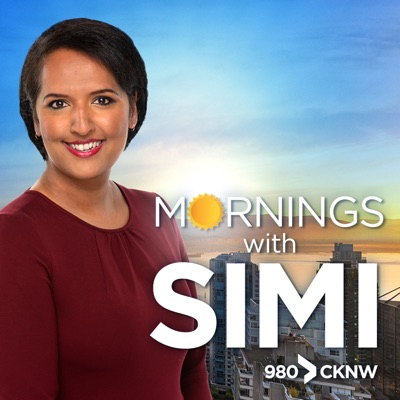 Simi Sara grew up in Surrey, B.C. and spent the first 15 years of her career in television. She has been with 980 CKNW since 2010 as the host of the The Simi Sara Show, until she made her move to her new timeslot as host of Mornings with Simi.

She is the recipient of two national and three regional RTDNA awards for her editorial and commentary work. Sara has also won both the BCAB Broadcaster of Tomorrow and BCAB Performer of the Year awards. Additionally, she is the only radio personality to win the Jack Webster City Mike award for commentary.

Chapter 1: Due to heat concerns, Canada and Sweden, the finalists for the gold medal in women’s soccer,  have both asked the IOC to reschedule their match for Friday at 5am Pacific. Guest: Crystal Goomansingh, Global European Correspondent Chapter 2: With Surrey Police aiming to have boots on the ground by November, are they really ready to make the transition? Guest: Jack Hundial, Surrey City Councillor. Chapter 3: You may have heard the name Julia Grosso a lot from the past couple of days. That is because she is part of Canada’s Women’s soccer team, who recently upset the USA to advance to the gold medal game. Guest: Carlos Grosso, dad of Team Canada Women’s soccer player Julia Grosso. Chapter 4: The Canadian Medical Association and the Canadian Nurses Association are calling for the mandatory vaccination of health-care workers. Guest: Tim Guest, President of Canadian Nurses Association. Chapter 5: Long-term care homes in the interior or BC, are currently dealing with multiple outbreaks of COVID-19. Guest: Terry Lake, CEO BC Care Providers’ Association. Chapter 6: Ever wonder how the COVID-19 vaccine was developed? Guest: Dr. Anna Blakney, assistant professor at UBC’s Michael Smith Laboratories and school of biomedical engineering. Was part of the team in London that developed an mRNA vaccine for COVID-19 before coming to Vancouver to work at UBC See omnystudio.com/listener for privacy information. 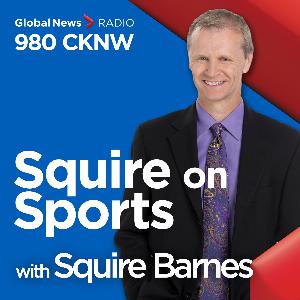 Squire on Sports - Who is the best

Who is the best player that the Whitecaps have ever developed? See omnystudio.com/listener for privacy information.

Setting up your will, Abuse at the Surrey BOT & Overloaded with drunk drivers

Chapter 1: Angus Reid poll shows BC residents have lowest numbers of active wills compared to other provinces. Pandemic made that number go up, especially for parents of little ones.  Guest: Raji Sohal, CKNW Contributor Chapter 2: New York City will become the first major U.S. city to require proof of COVID-19 vaccination for customers and staff at restaurants, gyms and other indoor businesses as the country enters a new phase of battling the highly contagious Delta variant. Guest:  Anita Huberman, CEO of Surrey Board of Trade. Chapter 3: The Surrey Police Service says it's aiming to have so-called 'boots on the ground' by the end of November at the latest.  Chief Norm Lipinski says a group of 50 officers will be deployed alongside members of the Surrey RCMP on or before November 30th. Guest: Janet Brown, CKNW Senior Reporter. Chapter 4: Police in Victoria B.C. nabbed 24 impaired drivers at roadblocks over the long weekend. Guest: Grant Gott-getreu, forensic consultant and retired police corporal Chapter 5: Today all vaccine clinics in BC will be open for walk-in appointments.  The “Walk In Wednesday” campaign is part of the province’s “Vax for BC” program to get as many British Columbians as possible vaccinated against COVID-19. Guest: Adrian Dix, BC Health Minister See omnystudio.com/listener for privacy information.

Making Cents of the Markets

Squire on Sports - De Grasse gets the Gold

View From Victoria: A fourth wave

Is Canada in the fourth wave, EV infrastructure & The sights and smells of VanDusen Gardens

Chapter 1: Is Canada in the fourth wave of the Covid-19 pandemic? We have watched as other countries, particularly south of us, grapple with rapidly rising case loads but here the focus has been on continued vaccination and relatively low numbers. Guest: Dr Isaac Bogoch, Infectious disease clinician and scientist at the University of Toronto. Chapter 2: Over the weekend lines can be seen at Tesla charging stations due to the high demand of electric car users. This prompted the question that if BC is planning to go full electric, does it even have the infrastructure in place to do so. Well who better to talk to then someone who  introduced legislation. Guest:  Andrew Weaver, Former BC Green Party Leader, Climate scientist; Professor in School Earth and Ocean Sciences, UVic; and former MLA for Oak Bay-Gordon Head. Chapter 3: With the poor air quality being extended in BC, how may this affect your health long term? The air of course coming from the several wildfires burning in BC, and now creeping into the lower mainland. Guest: Michael Brauer, Professor at the UBC School of Population and Public Health. Chapter 4: The Canadians won 1-0, with a goal scored by 23-year-old Jessie Fleming on a penalty kick 74 minutes into play. The Americans put on the pressure after the goal, but despite several close calls for the Canadians, were unable to score a point before time ran out. Guest: Colin Miller, White Caps Analyst. Chapter 5: VanDusen Gardens are one of the places in Vancouver who, despite covid restrictions, saw a boom in new visitors over the pandemic. Guest: Raji Sohal, CKNW Contributor Chapter 6: Dr. Bonnie Henry has been awarded the Order of B.C.  The Provincial health officer has been in the spotlight since March 2020 as the province’s lead in managing the COVID-19 pandemic.  Guest: Doctor Bonnie Henry, Provincial Health Officer See omnystudio.com/listener for privacy information.

Squire on Sports - Canada's soccer on another level

It is now time for our BC farming series “Keep it Local”. Over the past two weeks we have highlighted farms to convince you to buy local. Today, farm is bit different from others, but their farm is so interesting we just had to have them on. Guest: Amanda McAllister, Co-owner of Five Acres Flower Farm. See omnystudio.com/listener for privacy information.

Protecting your peepers, Trending in the wrong direction & Re-opening the Night Market

Chapter 1: As Canadians bask in the heat of summer, a new survey reveals that many may not be adequately protecting their eyes from harmful UV rays. Guest: Dr. Briar Sexton, an ophthalmologist based in BC . Chapter 2: British Columbia public health officials have not ruled out mandatory vaccines for health-care workers as part of a series of changes to protect vulnerable British Columbians. Guest:  Terry Lake, CEO BC Care Providers’ Association. Chapter 3: After making their Vancouver return this past Sunday and finally training on their home grounds during the week, Whitecaps FC are back in Utah for one more “home” match at Rio Tinto Stadium. Guest: Marc Dos Santos, Head coach of Vancouver Whitecaps FC. Chapter 4: British Columbia’s COVID-19 case numbers continued to trend in the wrong direction, topping 200 for the first time since June 5. Guest: Adrian Dix, BC Health Minister. Chapter 5: Concerns for the Night Market heading into the weekend, as large crowds gathered last week and COVID numbers continue to rise. Guest: Raymond Cheung, Night Market Organizer. See omnystudio.com/listener for privacy information.

View From Victoria: Time for a talk about resource development

The Columbus Blue jackets gave a hug contract to a defenseman, and most believe it's an attempt to keep talent from leaving the franchise. See omnystudio.com/listener for privacy information.

Six year journey across Canada, Stay away from the Interior & The other crisis in BC

Chapter 1: Dianne Whelan will be the first person to complete the 27,000km Trans Canada Trail, after paddling, cycling, and walking the route which connects the Atlantic, Arctic, and Pacific Oceans. Whelan completes this momentous journey by paddling into Victoria, British Columbia. She connects with us from her journey now! Guest:  Dianne Whelan, award-winning filmmaker and multimedia artist. Chapter 2: Cases of COVID-19 are surging among the unvaccinated and as Canadians prepare to head to the polls in an anticipated fall election, new polling suggests most people are worried about a potential fourth wave. Guest: Darrell Bricker, CEO of Ipsos Public Affairs. Chapter 3: Well it has been a rough week for the interior, as COVID-19 cases continue to surge, wildfires continue to burn, and hotter temperatures are expected for the next few days.  Guest: Colin Basran, Mayor of Kelowna. Chapter 4: The B.C. government has partially dug itself out of a massive hole created by COVID-19 crisis, but the province’s economy is still nowhere near pre-pandemic levels.  Finance Minister Selina Robinson released a financial update on Wednesday that showed B.C. ended the 2020-21 fiscal year with strong credit ratings and a lower-than-projected deficit. Guest: Selina Robinsons, BC Finance Minister. Chapter 5: The latest update from the BC coroner’s office drug toxicity report showed that at least 5 people were dying everyday due to the ongoing opioid crisis. Guest: Mark Tyndall, Professor, School of Population and Public Health,UBC. Chapter 6: Come September, B.C. 's post-secondary sector is returning to in-person classes after more than 18 months online. Guest: Brent Calvert, President of BC Federation of Post-Secondary Educators. See omnystudio.com/listener for privacy information.

View From Victoria: The deficit is not that bad

Squire on Sports - Not Too Bad

Making Cents of the Markets

Chapter 1: A change in guidance from the U.S. Centers for Disease Control is prompting a lot of discussion south of the border this morning. Guest: Reggie Cecchini, Global Washington Correspondent. Chapter 2: It’s not the total heat dome but it is hotter this week and Environment Canada says it will get even hotter tomorrow through Saturday. Guest: Troy Clifford, Ambulance Paramedics Union President & an active paramedic. Chapter 3: Just weeks after getting the green light to reopen, some restaurants and pubs in Kelowna have temporarily closed because of positive COVID-19 tests. Guest: Mark Burley, Executive Director, Downtown Kelowna Association. See omnystudio.com/listener for privacy information.

It is now time for our BC farming series, “Keep it Local”. This is where we talk to local farms to highlight them, and encourage more people to buy local. On today’s show, we talk to Golden Ears Cheesecrafters, and Emma Jane who is the co-owner and operator. See omnystudio.com/listener for privacy information.
See More
Comments