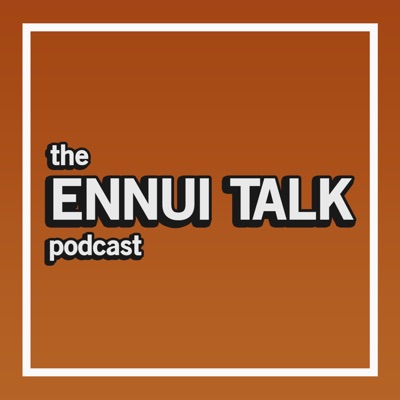 Author: We Are Ennui

Ennui Talk is a weekly talk show podcast that serves as an extension to the Ennui brand, hosted by its executive producer Matthew Winter. Each and every week, join him with members of the Ennui team, and occasionally guests, as they have funny yet thoughtful conversations, entertaining you with their stories and intriguing you with their discussions. Episodes every Monday.
148 Episodes
Reverse

148 Cancel Culture: The Good, The Bad and the Ugly

Matthew Winter (@matthewwwinter) and Kaz Ghost (@kaz.ghost) come together to discuss the concept of cancel culture, celebrities who had been cancelled in the past including Justin Bieber, director James Gunn and WWE superstar Enzo Amore, the cancellation of and apology from Shane Dawson, Jenna Marbles leaving the platform due to older blackface videos, the Chris D'elia allegations, the #SpeakingOut movement in the wrestling industry, and many more cancellations of celebrities and creators. TIMESTAMPS: 0:00 - The cancellations of David Dobrick, James Gunn, Enzo Amore and Justin Bieber 7:40 - The cancellation of Shane Dawson 16:49 - Jenna Marbles' cancellation and the concept of parody 23:37 - Chris D'elia's allegations 24:50 - The #SpeakingOut movement in the wrestling industry 29:42 - The petty cancel drama with James Charles and Tati Westbrook 37:37 - False allegations of Slazo and the negatives of cancel culture

Matthew Winter (@matthewwwinter) talks with internet comedian YungCripp (@realyungcripp), discussing growing his career on Twitter, TikTok's hand in going viral and building an online audience, creator anxiety about productivity, Lily Singh's transition into her late-night talk show, censorship on the internet, how YouTube should fix their censorship and monetization problems, and the project that YungCripp would like to work on given the chance. TIMESTAMPS: 0:00 - Evolving with content creation and being a Twitter comedian 7:51 - TikTok changing the game of virality and having a social media audience 17:12 - The anxieties of not being productive and being a traditional stand-up comedian 24:48 - Lily Singh transitioning to traditional media 33:50 - The influence of Bill Hicks and censorship on the internet 42:55 - How YouTube should change its censorship and monetization problems 50:25 - What project YungCripp would like to make

146 What Are Our Personal Experiences With Police? #BlackLivesMatter

Matthew Winter (@matthewwwinter) and Chris Hodge (@chris420hodge) come together to discuss Phillips Hue lights being overpriced, the H3/Keemstar drama, the internet forcing every celebrity, influencer and creator to have a say about #BlackLivesMatter, large companies hiring minorities only to fill a quota, and our own personal experiences with police, both good and bad. TIMESTAMPS: 0:00 - Phillips Hue are overpriced and the H3/Keemstar drama 7:26 - Forcing celebrities and creators to speak about #BlackLivesMatter 13:54 - Liam Neeson reflecting on racism and hiring minorities to fill a quota 21:36 - Dealing with police and our experiences with them

Matthew Winter (@matthewwwinter) and Noah Petersen (@noahisnoahwhois) come together to discuss the George Floyd riots, sciences not being real, their Omegle experiences, the future of deepfakes and AI voice, the new Scooby-Doo movie, and the latest Colleen Ballinger aka Miranda Sings controversy. TIMESTAMPS: 0:00 - The George Floyd riots and science isn't real? 6:15 - Noah is Jack's brother and our Omegle experiences 13:09 - Deep fakes and that new Scooby-Doo movie 24:34 - Colleen Ballinger sends lingerie to teen? 30:16 - That time Matt ordered pizza as "Famous CEO"

144 Is Nokeric The Future of YouTube? We Sure Think So! (feat. Nokeric)

Matthew Winter (@matthewwwinter) talks with comedy creator Nokeric (@eric_bernhagen) about getting shouted out by Anything4Views and SorrowTV, his production process, the struggles of building an audience on YouTube, his dedicated Patreon fanbase (where he sells ass paintings), turning fan meetups into videos, his Nathan for You inspiration, and the future of Nokeric.

Matthew Winter (@matthewwwinter) and Kaz Ghost (@kaz.ghost) come together for an Ennui Plus on Patreon special. They discuss why Patreon is the best way to support us, why Ennui will rarely ever be brand-friendly, Matt wanting to hire his friends, finding the balance between content and support, future shows for Ennui Plus, the big picture plans for the Patreon, and what makes a good Patreon. TIMESTAMPS: 0:00 - Why Patreon is the best way to support us 6:11 - Wanting to hire our friends in Ennui 11:18 - Content vs community 18:20 - Future free and premium shows 27:30 - Future perks for Patreon supporters 34:20 - Big picture plans for Ennui Plus 42:41 - Current tiers for members 46:44 - We just want to make it big!

142 Does Joe Rogan Host The Best Podcast In The World?

Matthew Winter (@matthewwwinter) and Liam Leschnik (@leschnik200) come together to discuss how high school teaches creative subjects like music and drama and its problems with it, the problems with the education system, their attempts at getting their licence, podcasts they’ve been listening to including The Misfits Podcast and The Joe Rogan Experience, and how Adult Swim has inspired low-budget alternative content. TIMESTAMPS: 0:00 - A false start and studying music in high school 11:31 - The problems with high school education 20:56 - Trying to get their driving license 22:52 - What podcasts they're listening to 27:48 - The Joe Rogan Experience and his inspiration 32:12 - The success of Adult Swim 28:16 - The death of traditional radio 44:27 - Not being scared by horror movies

Matthew Winter (@matthewwwinter) brings in filmmaker Jackson Hughens (@jacksonhughens) to discuss moving from North Carolina to Atlanta to join the film industry, being on the set of a professional production, getting into the industry, how school life can affect your interactions in the real world, their views on work ethic and ambition, the power of positivity, how the internet has brought us closer together, and their perspective on success. TIMESTAMPS: 0:00 - Moving to Atlanta to join the film scene 8:35 - Working on a professional comedy pilot set 15:01 - Having the mindset to get into the entertainment industry 26:36 - Between the cloud and the dirt 33:47 - Developing a work ethic and inspiring others 44:33 - Using social media to expand your circle 52:42 - Genuine connections online and the power of positivity 1:03:40 - Perspective on success and achieving goals

Matthew Winter (@matthewwwinter) and Ben Davis (@benjydavis) come together for the third annual Famous CEO Birthday Bash. They discuss if having internet is essential, Ben’s favourite (and least favourite) memories of Matt, reflecting on their documentary on YouTuber Kalab Templeman, Matt’s new views on making content, what they’ve learnt from writing Marty episodes, and Ben buying a motorbike and not even TELLING his best friend. TIMESTAMPS: 0:00 - Matt still has no internet and dealing with COVID-19 8:07 - Moving away and their Kalab Templeman doco 16:58 - Bad memes in the group chat 19:40 - What we're working on and Marty season 5 29:56 - The future of Marty and his internet show 39:07 - Ben bought a motorbike and his favourite Matt memory

139 Kanye West is the Best Rapper of All Time

Matthew Winter (@matthewwwinter) and Noah Petersen (@noahisnoahwhois) come together to discuss jacking off in isolation, if Animal Crossing is a kids name, RoosterTeeth’s RTX convention in Australia compared to the US, how many “followers” you need to make a living, watching Smosh a hell of a lot during their teenage years, and if Kanye is the best rapper of all time.

138 VICE Shows Us The Dark Side of Chris Benoit

Matthew Winter (@matthewwwinter) and Kaz Ghost (@kazpar1) come together to discuss the effects of COVID-19 has affected the content creators, the adaptation of Looking For Alaska and how it compares to the book, if teen television can break ground in 2020, Viceland’s Dark Side of the Ring and its episode on Chris Benoit, and their upcoming review of the 2013 film about the Apple founder, Jobs.

137 EnnuiMania I: The 2020 Ennui Anniversary Celebration

Matthew Winter (@matthewwwinter) and Jack Petersen (@levunrif) come together for EnnuiMania, the first annual Ennui Anniversary Celebration. They discuss the origins of Ennui and why Matt thinks it hasn’t succeeded, Nathan for You and shows that do on-the-street comedy, if they could do stand-up to a decent degree, wanting to do live shows, and hoping that Ennui is a success by EnnuiMania II.

Matthew Winter (@matthewwwinter) brings in Liam Leschnik (@leschnik200) to discuss appearing in some recent episodes of Marty’s Internet Show, wanting to expand into other film projects, Matt having moved away and how it will affect the future of Ennui, how Matt views Ennui Plus on Patreon, and answering some Ennui-related questions from the fans (or one fan, at least).

Matthew Winter (@matthewwwinter) is joined by voice actor, producer and musician Matt Euston, also known as RetroArcadeMonkey (@retroarcademonk). They discuss becoming friends while narrating the first season of Marty’s Internet Show, if you can be a full-time voice actor in today’s age, leaning towards filmmaking because of this, traditional media affecting both online voice acting and animation, if anybody can voice act, and being big fans of Aunty Donna and Nirvanna the Band the Show.

134 Finally, Onision Is Getting What He Deserves

Matthew Winter (@matthewwwinter) and Kieren Collison (@kieren_collison) come together in the Ennui HQ to discuss Billie Elish being 18 now, Matt getting his tooth out, Lil Dicky’s new show, their Instagram hater, the entire Onision saga including the allegations and saga with Chris Hansen, and the argument of if your life should be ruined if you’ve done something wrong online.

Matthew Winter (@matthewwwinter) and Kaz Ghost (@kazpar1) come together in the Ennui HQ to discuss beauty YouTuber NikkieTutorials coming out as transgender, Bryan Cranston being a fantastic actor in both Malcom in the Middle and Breaking Bad, the first two seasons of Netflix’s You, Netflix adapting Lord of the Rings into a series, and conflicting ideas about American Reunion.

132 Is Hideo Kojima’s PT The Scariest Game Ever?

Matthew Winter (@matthewwwinter) and Kieren Collison (@kieren_collison) come together in the Ennui HQ to discuss Boogie2988 committing tax fraud and being a racist, Matt’s bad Bill Cosby joke that he’s kept in his back pocket, YouTube’s update to the harassment policy, what should be allowed on YouTube, and the platform wanting to appeal to advertisers.

Matthew Winter (@matthewwwinter) and Noah Petersen (@noahisnoahwhoisnoah) come together in the Ennui HQ to discuss supporting people on Patreon, when it’s worth subscribing to streaming services, how commentary channels are negative contributors, dealing with creative burnout, if Australian humour works for Ennui, making content that isn’t too niche, and why we shouldn’t hate on Chance the Rapper.

Matthew Winter (@matthewwwinter) and Ben Davis (@benjydavis) come together in the Ennui HQ for the first annual Ennui Awards, choosing their personal winners for this year’s best movies, TV shows and musical acts, their favourite internet creators and podcasts, the best memes and biggest cringes, and of course, who would Ennui Member of the Year.
See More
Comments