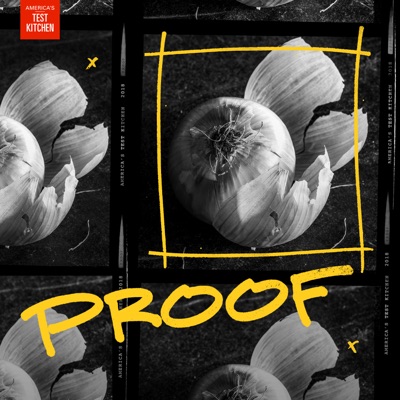 We tell the weird and surprising and funny backstories around food and drink. The tales we haven’t all heard yet, the ones that have been lost, the under-told. This is not a recipe show. And this is not a show about celebrity chefs or what they like to eat. Proof goes beyond recipes and cooking to investigate the foods we love (tiki drinks) and don't love (the grain bowl); ask the big questions (where do food cravings come from?); and uncover the hidden backstories that feed your food-obsessed brain. Hosted by Bridget Lancaster. A production of America's Test Kitchen.

Our friends a Transmitter Media have a body-positive and unapologetically food-positive show that is about breaking up with diet culture. Host Virgie Tovar talks to amazing ‘rebel eaters’ who will change the way you think about food and your body. Their second season just launched and features great conversations with guests like Francis Lam from The Splendid Table, as well as fascinating stories about why we eat what we eat. Listen now in your favorite podcast app or at rebeleatersclub.com

Nichols Electronics has a monopoly on the ice cream truck music box market. When you hear the familiar sound of ice cream truck music ringing through your neighborhood, chances are extremely high that it’s coming from a box that Mark and Beth Nichols created. For decades, they’ve been in the business of evoking nostalgia and happy memories. Until recently, when it was revealed that one of the most popular songs on their boxes has a dark history. Today on Proof, we tell the story of how one small family business faced the biggest controversy to rock the ice cream truck industry.

How Orange Juice Was Built

When you see “not from concentrate” on a carton of OJ, you might assume it’s healthier than other brands. But actually, that’s a relic of a decades-long juice brand battle and deceptive marketing that sold customers the promise of a "balanced breakfast." In fact, the behemoths behind orange juice popularity have constantly shape-shifted and reinvented themselves in order to bring our favorite breakfast juice to the proverbial table. In this episode of Proof, we chronicle Minute Maid and Tropicana’s decades-long tête-à-tête, that firmly solidified orange juice as a permanent fixture of the American diet.

The color blue doesn’t really occur naturally in food. Think about it: when was the last time you ate something blue? Maybe a piece of candy or an ice pop that was “blue raspberry” flavored. Food marketing teams have steered their companies away from blue labels and blue colored foods (except in a few cases), often citing studies on the psychology of color and perception of taste. But one popular study might not be all it’s cracked up to be. This week we teamed up with Slate’s Decoder Ring podcast to dig deeper and find out why blue isn’t a common color on our plates.

Sizzler and the Search for the American Dream

When Cecilia Hae-Jin Lee and her family moved to America from Korea in the 1980s, they were immersed in a whole new world. New schools, friends, jobs, and new food. None was more remarkable than the salad bar at Sizzler, with its small yellow cubed pieces of cheese and Thousand Island dressing. In this memoir, Cecilia and her siblings recall their first few years in the US, and how food shaped their family’s pursuit of the American Dream.

Hervé Garnier owns a small vineyard in the tiny French town of Beaumont making wine from hybrid Franco-American grape varieties. But this fruity, floral, rich red wine he makes… is illegal. According to outdated French and EU law, the wine made from these hybrid vines is dangerous, that it induces madness. But they also claim the wine just doesn’t taste good enough to be sanctioned as “French Wine.” Hervé calls these excuses absurdités. For decades, he has fought the restrictions to no avail. So, what is French Wine? And who gets to say?

The Case of the Snail in the Ginger Beer

Modern personal injury lawsuits are now considered frivolous, at best. But 66 years before the infamous spilled McDonald’s coffee, May Donoghue drank a ginger beer in Paisley, Scotland and changed personal injury law forever. May, a humble shopkeeper, discovered a snail in her drink and decided to sue. No such lawsuit had ever been won before. She was slandered in the press, and criticized in court, but to the surprise of many, she won. In Proof’s first ever docu-drama episode, we explore the unspoken trust between consumer and seller through a dramatized retelling of May Donoghue’s story.

Illegal wine, food color psychology, a snail in a soda, and an immigrant family's food story. We're back with more of the food stories you love. Tune in for Season 6 of Proof beginning December 3.

Our friends at This Old House have a new podcast "Ask This Old House". The show features home enthusiasts around the country, who ask questions about the toughest projects in their homes.

Our friends at GBH and Antiques Roadshow have a new podcast called Detours, where you'll get some insider info on objects you've never seen before, and why. We're excited to share their first episode with you: The Hardest Fact I Ever Checked.

The Villain of Trader Joe's

The Trader Joe's subreddit is a place for friendly conversation and helpful tips for how to use Trader Joe's products. But what happened when a villain caused trouble in the online community?

The Genetics of Taste

Bridget speaks with Dr. Danielle Reed from the Monell Chemical Senses Center about the genetics of taste perception. To learn more about the Monell Center’s research, visit monell.org.

Ashley Lecker, Author of the Serial Killer Cookbook, joins Bridget to talk about Famous Death Row Meals. Warning: this episode may not be suitable for children. You can purchase Ashley's book here: https://ulyssespress.com/books/the-serial-killer-cookbook/

A new branch of crime has emerged in central California under cover of mass almond groves: the theft of beehives. Why? Because they’re really valuable. The American honey economy has crashed, leading beekeepers to find other sources of income for their bees. The burgeoning US Almond industry was just the key. But it's a dangerous gig for the bees, making their hive rental fees steep and a perfect target for organized crime.

You're a Good Man, Brady Keys

After Martin Luther King, Jr.’s assassination in 1968, Civil Rights leaders, fast food corporations, and the Nixon administration began an unlikely collaboration: to promote “Black Capitalism” in the fast food industry. The idea was this: promoting Black franchise business ownership in Black neighborhoods could improve the quality of Black life in America. Brady Keys was the king of Nixon’s Black capitalism. He received upwards of 9 million dollars in federal money to develop his fast food franchise, All-Pro Chicken, and collaborated with KFC and Burger King in ground-breaking franchise deals. Keys’ story is a case study of Black business ownership in the ‘60s, when the path to Civil Rights was paved with profits.

The Case of the Disappearing Franchise

Historian/Fast-food Detective Marcia Chatelain is our guide as we explore the cases of American fast food franchises that once were, until they vanished without a trace. The Mid-century was the height of fast-food franchising: McDonalds, KFC, White Castle. But what about the chains that didn’t survive? From pyramid schemes and copycats to acquisitions and fish wars, we explore the culprits in the cases of the disappearing franchise.

Dr. Yamei Kin was orphaned by her parents at a young age, and adopted by missionaries. She became one of the first Chinese women to receive a medical degree. In the 1910s, the USDA hired Dr. Kin to research high-protein foods in light of World War I shortages. But she was never able to position tofu as a respectable ingredient in the American diet. Why wasn’t the West ready for Tofu?

Will The Real Mr. Oreo Please Stand Up?

A collaboration with Business Insider’s Brought To You By. In this three-part story, we tell the history of the Biscuit Wars of the early 1900s. Then, we learn of one woman’s relationship with Oreos as an expression of rebellion to her Jewish roots’ Kosher rules. Lastly, we also uncover the real story behind Mr. Oreo, the man who somehow got credit for inventing the current Oreo cream filling. Read Marjorie Ingall's essay about the Oreo Stella Parks, BraveTart: Iconic American DessertsRead from Business Insider: How the Oreo cookie went from unknown knock-off to the world's most popular cookie, as a result of a sibling rivalry between baker brothers

The Search for the Queerest Food

In John Birdsall’s 2014 article, "America, Your Food is so Gay," he describes a particularly indulgent cheese burger as "unflinchingly queer." For reporter Chad Chenail, this sparked a journey of self-discovery through queer theory, all in an attempt to answer the question: What is the Queerest food?
See More
Comments (14)

I love this podcast but why is it I can't find out more information about proof when I go to Americantestkitchen.com/proof. Your help would be greatly appreciated.... thank you all.

Living in hurricane territory, I try to keep a 3-6 months' pantry. But even in the aftermath of Hurricane Katrina, (during which my pantry was relied upon a bit), I could not bring myself to eat the MREs that were handed out by the government. I am a 1980's-era veteran, and in my mind, MREs are synonymous with "awful", "cardboard", and "never-food". I am sure technology has improved MREs, but I just cannot get past the remembered horrible taste and texture of those early 80s attempts. Sorry, ugh!

great show. lets do some on food and diet trends! I'd love to hear more on Keto, Paleo, gluten free, veganism and more!

y'all I found Lia Haddock!

BOWLS host has my bowels howling :)))

I really enjoyed this one- keep it up! I want more!