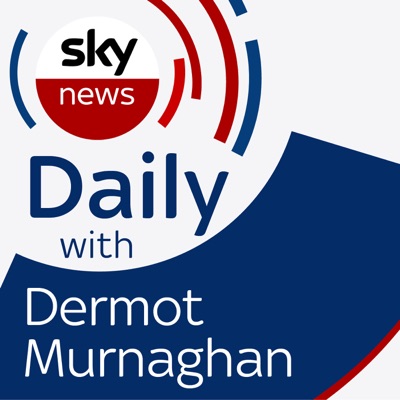 The Sky News Daily gives you the story beyond the headline. Putting people at the heart of our storytelling with added insight and analysis from our team of specialist correspondents and expert guests, we shine a light on a topic of the day with clarity and authority. Published every weekday.
998 Episodes
Reverse

Changing Rooms: Behind the door of No.11 Downing Street

Prime Minister Boris Johnson is facing increased scrutiny over the funding of the revamp of the flat he shares with fiancée Carrie Symonds. Last week, the Electoral Commission announced a formal investigation.As allegations of “sleaze” pile up, the Sky News Daily podcast delves into the changing design tastes of Downing Street and its residents.Host Jonathan Samuels hears from Anne McElvoy, whose Tatler profile of Symonds spawned the infamous “John Lewis furniture nightmare” quote and interior designer Celia Sawyer talks through the tastes of Carrie Symonds. Plus, researcher Jack Brown explains what Downing Street improvements say about prime ministers.

Colin v Cuthbert – protecting the brand or a cake-tastrophe?

The killing of Adam Toledo: Lawful but awful?

It was around 2.30am on 29 March when 13-year-old Adam Toledo was shot by a police officer while unarmed and holding both hands in the air. Two weeks later, police bodycam footage of the shooting was released, triggering protests around Chicago.But does the footage show a human error in the heat of the moment or a reaction to a genuine fear for life?Host Ashna Hurynag is joined by Sanya Burgess, who is part of Sky News data and forensics team that has been analysing the footage, and Jerry Ratcliffe, professor at the Department for Criminal Justice at Temple University in Philadelphia, USA and former Metropolitan Police officer.

On May 6, Scots will head to the polls to decide their Scottish Parliament. The outcome may have huge consequences for the future of the United Kingdom. On the Sky News Daily podcast, host Dermot Murnaghan speaks to Sky’s Scotland bureau chief James Matthews about how independence and Brexit are making this election one to watch. Plus Ryan Griffiths, Associate Professor of Political Science at Syracuse University in New York, offers his analysis on how sovereignty is won, and travel bloggers Sam and Alex Grant explain why Scotland is a hit with their global audience.

President Joe Biden has reached his 100th day in the White House. How has he spent his 'honeymoon' period? And how is he navigating tricky relationships with Russia, China and the UK? Host Dermot Murnaghan speaks to Omarosa Manigault Newman, a former aide to President Trump, about Biden's stance on racial equality and his domestic popularity. Plus, Dr Leslie Vinjamuri, Director of the US and the Americas programme at Chatham House, explains how his approach to China will involve much more than trade.

William & Kate: A Royal love story & future of the monarchy

A decade on from their wedding, we look at the success of the Duke and Duchess of Cambridge as a couple, parents and brand - as well as the causes they are most passionate about.On the Sky News Daily podcast with Dermot Murnaghan we are joined by chair of Heads Together Ian Cheshire, Pauline Walmsley - CEO of Early Years - along with Royal editor at The Sunday Times, Roya Nikkhah and Claudia Joseph, who wrote Kate's first biography.Daily podcast team:Podcast producer - Annie JoycePodcast producer - Nicola EyersPodcast producer - Lauren PinkneyInterviews producer - Tatiana AldersonArchive - Simon WindsorArchive - Rob FellowesArchive - Nelly StefanovaMusic - Steven Wheeler

May elections: Why is Hartlepool politically fascinating?

India has set a new global record for COVID-19 cases recorded in one 24-hour period for the fifth day in a row, huge numbers of people are dying, and it is running out of oxygen. But what has caused this new wave? How did they get here and what does India need to do to get out of the coronavirus crisis? In this episode, host Dermot Murnaghan is joined by Sky News special correspondent Alex Crawford and professor Srinath Reddy, president of the Public Health Foundation of India.

On the Sky News Daily podcast, Inzamam Rashid examines what is Ramadan and why Muslims fast for up to 16 hours a day, as we hear from world-class athletes about how they balance sport with their religion. Joining us we have president of the Muslim Council of Britain Zara Mohammed - who also discusses COVID vaccine hesitancy among some Muslims - plus footballer Adil Nabi, Olympic champions Lutalo Muhammad and Moe Sbihi and boxer Ruqsana Begum.Daily podcast team:Podcast producer - Annie JoycePodcast producer - Nicola EyersPodcast producer - Lauren PinkneyPodcast producer – Sabah ChoudhryInterviews producer - Tatiana AldersonArchive - Simon WindsorArchive - Rob FellowesArchive - Nelly StefanovaMusic - Steven Wheeler

The European Super League – the most important comeback in football history?

It was one of the most dramatic nights in football...off the pitch. Six of England’s biggest teams announced they would be joining an elite league with six of Europe’s most high-profile teams. 56 hours later, it began to crumble as the first of the 12 pulled put. What has this shown about the business of football in England and could an elite league still be on the cards? Host Dermot Murnaghan is joined by Sky News sports correspondent Martha Kelner, agent for the FA Shehneela Admed, and City editor of the Daily Mail Alex Brummer.

Home Secretary Priti Patel is set to announce steps to tackle the rise in dog theft in the UK. Sky News Daily podcast host Dermot Murnaghan explores why pets are being snatched from their owners, and what can be done about it. He speaks to head of public affairs at Dogs Trust, Claire Calder, about the scale of the issue and why puppy farming and puppy abandonment cases are causing alarm. Leicestershire councillor Simon Whelband explains how he’s working with police to tackle dog theft in his area. Plus, Charlotte Robson from Cheshire describes the moment her two family Labradors were stolen, and the race against time to find them.

Justice for George Floyd but will Chauvin trial change America and beyond?

Spermageddon: Could men be infertile by 2045?

Men are becoming increasingly less fertile. A study found that sperm counts in the West had dropped by nearly 60% in the past 40 years. According to that study, if sperm counts continue to decrease at this rate, they are set to reach zero by 2045. What is hijacking our fertility, and could we be on the brink of extinction? In this episode, host Dermot Murnaghan is joined by Shanna Swan, an environmental and reproductive epidemiologist who explains the causes of this reproductive crisis; Kate Brian from Fertility Network UK talks through the effects that infertility can have on people; and sperm donor Kyle Gordy describes the increase in demand for his services.

Hong Kong, migration and integration: Is the UK a welcoming place?

On this Sky News Daily special, listen back to the funeral service of The Duke of Edinburgh with commentary from Sky's Royal commentator, Alastair Bruce.*Available until 17th May 2021.

Aid, poverty and rhinos: Conservation efforts to be shot down by spending cuts?

After foreign aid was cut from 0.7% of GDP to 0.5%, the UK government has been clear it still prioritises biodiversity and climate projects. But what role does aid have in the success of conservation efforts? And how is the fight against poverty connected to our fight against environmental disasters?Host Dermot Murnaghan speaks to Alex Oelofse, who is dedicating his life to protect rhinos in Africa. Plus, Sky’s special correspondent Alex Crawford and producer Chris Cunningham return from their mission to Namibia, where they uncovered truths behind poaching and oil exploration.

What is lobbying? Cameron, Greensill and the ‘carte blanche’ review

The Kids Are Alright: Is a Welsh ‘youthquake’ on the horizon?

16- and 17-year-olds in Wales will have a chance to have their voices heard at the ballot box in the May 2021 elections. How will turnout impact the polls? And are teens educated enough to make an informed choice?On the Sky News Daily podcast, host Kate McCann speaks to Jonathon Dawes from the Conservatives, Poppy Stowell-Evans from Labour, and Gwion Rhisiart from Plaid Cymru about the difficulties of being young in politics, and what getting the vote means to them.

These abortion pills aren't safe at all. They are deadly dangerous for the defenseless and voiceless little baby!

that chef ruined the podcast.... captain obvious. and referred to himself in third person....worse than when you have rappers on