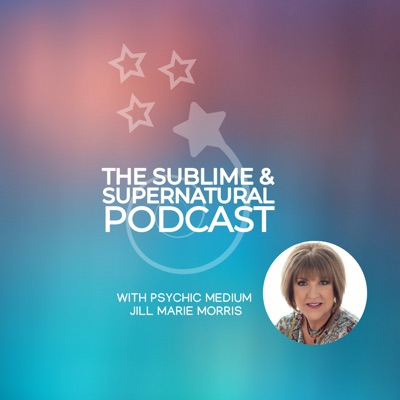 The Sublime and Supernatural

The Sublime & Supernatural is a weekly podcast hosted by Psychic Medium, Comedian, Actor and Author Jill Marie Morris. This podcast covers a variety of topics from spirituality, to the paranormal, and more.
52 Episodes
Reverse

Time for FAQs: Jill's Most Frequently Asked Questions as a Psychic Medium

In this week's episode, Jill shares her top, most frequently asked questions (and answers) she receives as a Psychic Medium. From cleansings, to Heaven and everything in between, some of her answers may not surprise you, while others certainly may.

In this episode, Jill describes her experiences involving a bright, white light since childhood. After a limited, first encounter during the summer of 1969, the light would return approximately four years later and continue throughout her life, to present day. What could this light be? What happens during her experiences? Find out more by listening to this intriguing episode of The Sublime & Supernatural Podcast.

In this episode, Jill discusses a history of dealings within the field of the paranormal that have painted an unsavory picture of the community. Does true collaboration exist to benefit the study of the paranormal, or is it all egos and agendas? Tune in and find out Jill's take on ParaUnity.

In this episode of The Sublime & Supernatural Podcast Jill shares intense spiritual experiences that took place while visiting the Scottsdale, Arizona area in 2016. From a Native American Spirit Guide, to her great-great grandmother Gertrude, to rocks and crystals, listen and learn why this set of events will forever hold a very special place in Jill's heart and soul.

Haunted by the Living?

In this episode, Jill shares her thoughts about the possibility that the living may be partially responsible for some hauntings. Could a past life be drawing the soul of the living via a dimensional shift, back to a place that was meaningful in a past life during sleep, or meditation? Is it possible that the living can leave energetic imprints on spaces during present life and revisit those locations during sleep? Find out more of Jill's perspective on this interesting topic by listening to this week's episode of The Sublime & Supernatural Podcast.

After a self-imposed hiatus, Jill discusses the importance of self care. Times are tough and certainly stressful, so take a beat and listen to ways you can help yourself physically, emotionally, spiritually, and even financially.

The next few episodes of The Sublime & Supernatural Podcast will feature Fractured Fairy Tales. What is a fractured fairy tale? It is a story, originally written by The Brother's Grimm, and uniquely twisted around by Jill to bring a bit of silly into such strange times many are experiencing as of late. This week's story: The Frog-Prince. Sit back, relax and enjoy this silly tale about a happenstance relationship between a frog and a fashionista.

The next few episodes of The Sublime & Supernatural Podcast will feature Fractured Fairy Tales. What is a fractured fairy tale? It is a story, originally written by The Brother's Grimm, and uniquely twisted around by Jill to bring a bit of silly into such strange times many are experiencing as of late. This week's story: Little Red Riding Hood. Sit back, relax and enjoy this tricky tale about a lost teen, a wild granny and a big, bad wolf.

In this episode, Jill discusses dealing with stress during the early stages of the COVID-19 outbreak. Keep your fear in-check and listen to some ways to stay sane and healthy. Keeping a positive attitude is equally important as washing your hands during an epidemic.

In this episode, Jill shares her experiences as a psychic medium while visiting historic Salem, Massachusetts. Having made several trips to this location, Jill describes both known and little known areas of the city that left a lasting impression. Sites include: The Salem Jail, Witch House, The Turner Ingersoll Mansion and the Hawthorne Hotel. It's a great episode to listen to whether you're planning a future trip, or simply want to learn about this old New England city's rich history.

The Soul: After Death of the Physical Body

Based upon her opinion as a psychic medium, Jill continues discussion of the soul's transition after death. Whether crossing over immediately, or reconciling in transition, Jill believes that each soul's trajectory upon passing is unique, and dependent upon their energy throughout life, as well as at the time of death.

From Life to Death: The Three Stages of Transition

In this episode Jill explains the three stages of a soul's transition at the end of life. From giving up the will to live and preparing for the next part of the journey, to the final act of the physical body letting go of the soul, Jill offers her insight and unique perspective as a psychic medium.

In this week's episode, Jill shares updates regarding her mother and how caring for an ill parent can help with your spiritual journey. From the importance of compassion, love, patience and understanding, to practicing selfcare, the toughest of journeys can also end up being the most fulfilling.

Demons and Dark Entities: A State of Evolution Relative to 207

In this podcast episode Jill shares how her opinion of demonic oppression and possession pertaining to her husband's suicide has evolved with time. From subjective thinking at the concern of her former priest, to research and a quest to objectively learn as much as she can, Jill suggests that everyone involved in the paranormal field should keep an open mind as to what goes on with cases involving darker entities. Also addressed: How "fractures" can lower the threshold and create issues with spiritual protection.

This is the fourth podcast in a series dedicated to children with psychic abilities. In this episode, Jill discusses spiritual protection and blocking ideas that parents can try with their psychic children. Not only is it important for the child to learn how to protect themselves, it is equally important for parents to learn how to do so, too.

This is the third podcast in a series dedicated to children with psychic abilities. In this episode, Jill discusses pre-teen and teenaged children with demonstrated psychic abilities. Also addressed: What a parent can do to help their psychic child, as well as what to avoid doing that could become harmful to the teen. As always; the focus should be on open door communication between parent and child.

This is the second podcast in a series dedicated to children with psychic abilities. In this episode, Jill discusses infants who track the unseen with their eyes, toddlers with imaginary friends and children who have nightmares. Also addressed: What happens when a child may be having a family, or mental health issue, rather than something paranormal or psychic gift-related.

This is the first part of a series of podcasts dedicated to children with psychic abilities. In this episode, Jill shares her journey as a psychic medium from a young age, mentored by her psychic grandmother. Insightful, personal anecdotes, experience and decades of work in the field as a psychic medium has led Jill on a path to helping other children who are (or may not be) gifted.

From resolutions, to intentions and goals, Jill Marie Morris discusses different approaches to help achieve what you set out to do in 2020. Finding yourself running into a trigger? Learn how to combat the stressors that can throw you off track. Whether it's behavior modification, or adjusting your goals, turn the new year, into a new you!

The Mystery of The Spanish Kitchen

In this episode Jill Marie Morris discusses the mystery of The Spanish Kitchen. Originally opened in the early 1930's by John and Pearl Carreto, this Hollywood restaurant and hot spot for celebrities such as Bob Hope and Mary Pickford, came to an unforeseen and abrupt end when someone placed a sign stating "Closed For Vacation" on the door of 7373 Beverly Blvd, Los Angeles, CA, late one night in late summer of 1961. Prepped for the next day of business, it never reopened, yet remained untouched for decades. Did John truly die from Parkinson's Disease, or at the hands of the Mob? Why was Pearl so secretive and reclusive after the sudden close of the restaurant? What apparitions and ghosts have been seen at the location? Jill lends her perspective as a psychic medium on this intriguing case.
See More
Comments