FunkQuest - FunkQuest is an interactive discussion show. Funksters get to pick their own questions... they just don't know what they are. FunkQuest is competitive. In each episode, one Funkster will go through to the next round, and one will be eliminated until we crown the champion Funkster for that season.
191 Episodes
Reverse 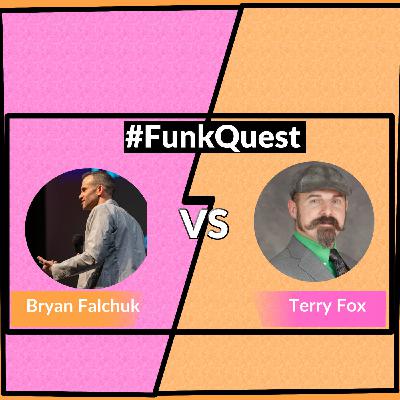 FunkQuest - Season 2 - Round 2 - Episode 21 - Bryan Falchuk v Terry Fox​Funky Thinkers know that IDEAS only come from free-flowing CONVERSATION.Listening (without prejudice) to new ideas and speakers from outside your usual network truly qualifies as FUNKY.Each question has a strict time limit. So no multi-headed long and complicated self indulgent stories to endure. Just short punchy bite-sized truly Funky ideas, as we GET THE FUNK OUT! 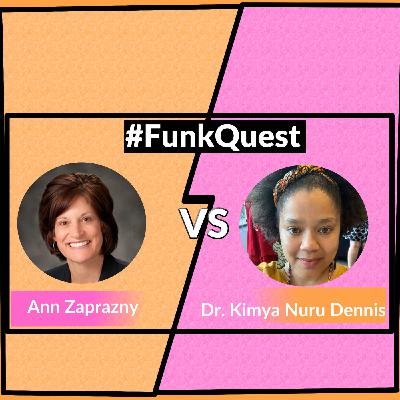 Funkquest- Season 2- Episode 20- Ann Z v Kimya DennisAfter​ starting her FunkQuest ​journey with a walkover, this episode was Ann Zaprazny's first debut into the real game. Dr Kimya Nuru Dennis was, in this case, a veteran.​Ann began the game with Question 1; about her knowledge of CPR (Cardiopulmmonary Resuscitation). ​She learned how to do it for a babysitting couse when younger and although not used for used for years, felt sure it would kick in when needed.Kimya was excited about the fact that technology is helping to reach those who are in need.Question 2: Ann found that she rolled her eyes, mostly because her children were very critical of her even when she has been helping them. (Just Typical).​Kimya answered the same question, rolling her eyes at people who constantly say things like 'we're all in the same boat' especially in the times of Coronavirus. She felt that to ​have a unifying experience, people need to understand their differences.Question 3 was about Radical Action - and Kimya felt that being able to challenge the Key Decision makers of the world and speaking out ​was good.Ann ​was asked where she would like to visit - citing I​celand and Alaska as places she would go.Kimya chose the Elephant Icon for her 4th question. He prefers to be 'stuck in time' in the here and now.From the happenings of the Corona Pandemic, Anne talked about what we might learn to​ 'stop us using more than we need'.Question 5 and Kimya was regretting having given up learning a second language, but felt that with more resources and perhaps a push for people to learn differnt languages (not just mainstream french, spanish, german) it would help combat Xenophobia.​​In her final question; Ann told her motherhood story of staying awake more than 24 hours, giving birth. 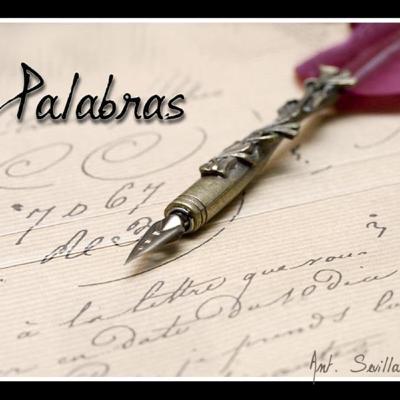 FunkQuest - Season 2 - Round 2 - Episode 19 - Alison Donaghey v Lisa Marie Platske​Both Alison Donaghey and Lisa Marie Platske are old pioneers of ​FunkQuest game, as such, episode 19, ​in season 2 of FunkQuest, should be a good one.Alison began this game choosing the 'Box House' icon and answering the question - "Which is the most underused room in your house?" Filled with innuendo, as well as finding out she has trouble sleeping Alison's ​bedroom was the answer.In her first question we found that; unlike most people, ​Lisa Marie has no interest in going shopp​ing she finds it painful and unlike Alison, 'hanging out' in a mall or shopping centre is something she can't stand.The second question for Lisa Marie was about the picture on ​her desktop - everyone has something - and for Lisa Marie; a picture of a girl running along the beach inspires peace and tranquility. Alison interrupted Lisa question knowing her desktop thing was a little less tranquil. (See below)​Question 2 for Alison was about eating dropped food. She has dogs in her house ​so any dropped food would be snatched up​. ​On the subject in general she felt it was ok to pick up if it wasn't sticky. As a child she had eaten lots of unsavoury things and not been hurt - while an immunity to germs had boosted her health.Next Alison revealed that any time of day was good for her,​ athough it depended on the dayLisa Marie picked the 'board game' next with the question about what was uniquely hers. Her reply was ​a great answer about her life and experiences.Question 4 also saw a good answer from Lisa Marie; Investing in yourself - doing whatever you have to do, depends on preparation​, not LUCKAfter a brief discussion on the psychology of the picture ​icons picked by people, Alison ​then ​said she would not have a picture on her wall, but revealed that ​she had put a piece of junk on it which she liked. (see below)​Alison chose the 'pig' icon for question 5 and answered that her first real journey into alcoholic drinks did not go well. ​Tequila however is her favourite. ​ Lisa Marie's final question became a different answer than expected. 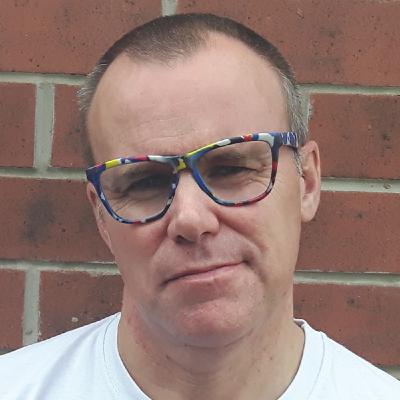 Kam Knight and Kerry Wekelo both came into ​​Season 2, Round 2 of FunkQuest as '​​Sheriffs'. Both were knocked out in the first round but resurrected after the unavailability of two other players.Kerry chose the first icon and ​question and Kam chose to answer the same question. For Kerry the answer to having given a blood donation was a simple 'Never', although she has a rare blood type, she has a condition which means that she tends to pass out​.Kam acknowledged he had given blood once and was ​hounded by blood drive organisations. His blood is good to use, but in the USA, blood drive organisations get paid for the amount of blood they collect - which put him off.Question 2 "Street Fighter 2" was the game ​Kam played for hours as a kid and he got to be very good at it.Kerry was asked to make us believe something about her we didn't know. We now know that she has written books on​ the subject - Yoga for Kids.With​ Question 3 we also learned that Kerry likes to 'waste' time training and walking and is ​enjoying the car free atmosphere, ​of this present coronavirus lockdown.Answering the bugs and mini-beast ​question - Kam explained how he had travelled a lot in Jungle type areas and the bugs and beasts like millipedes and centipedes are the most repellent to him.Kam is not the greatest singer and in ​his next question - about doing Karaoke he told us about the time he wanted to start a New Year being bold -​ ​ with disastrous results.Kerry answered her 4th question ​with an account of a r​oad trip she made from Virginia to Maine - 13 hours, with scenery breaks, but ​without planning where to stay on route.Kerry's ​question 5, was about ​her best boss ​who she named Liza; for the strict attention to detail ​a​nd tough training, who she now sees was a critical friend and mentor.Kam also took the best boss question and used it to pay homage to all the bosses who took a youth with problems and showed him the strong fundamentals of how things should be done.​What are the FUNKQUEST rules?Funkquest is a fun interactive online game that features five rounds. ​ ​Each player​ selects the icon which most tweaks their interest. Each Funky ​icon has a Funky question.The ​question shown may or may not be related to the icon.SO potential Funksters have to think on their feet. ​The winner is decided by the audience and goes through to the next round.What's so good about FUNKQUEST ​?​Funky Thinkers know that IDEAS only come from free-flowing CONVERSATION.Listening (without prejudice) to new ideas and speakers from outside your usual network truly qualifies as FUNKY.Each question has a strict time limit. So no multi-headed long and complicated self indulgent stories to endure. Just short punchy bite-sized truly Funky ideas, as we GET THE FUNK OUT! 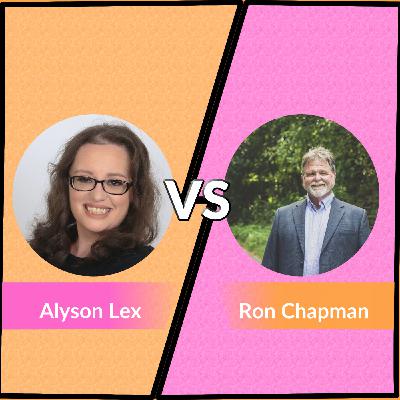 FunkQuest - Season 2 - Episode10 - Emily Davis v Terry FoxIn this episode accupuncture, the song of achilles and authenticity.​What are the FUNKQUEST rules?SO potential Funksters have to think on their feet to score points. ​The winner is decided by the audience and goes through to the next round.What's so good about FUNKQUEST ​?​Funky Thinkers know that IDEAS only come from free-flowing CONVERSATION.Listening (without prejudice) to new ideas and speakers from outside your usual network truly qualifies as FUNKY.Each question has a strict time limit. So no multi-headed long and complicated self indulgent stories to endure. Just short punchy bite-sized truly Funky ideas, as we GET THE FUNK OUT!

FunkQuest Season2 episode5 Tammy Lynn Guns v Kimya Dennis. In this episode, can we track down Mrs Fagin (Kimya's primary school teacher)? Can you love pizza more than you love your kids and I get schooled on one of the icons on the playing board.Funkquest is an interactive conversation show. Potential FUNKSTERS get to pick their own questions. They just don't know what they are...We are looking for insights, useful snippets, things we didn't know. We call this FUNK.What are the FUNKQUEST rules?Each FunkQuest episode features five rounds. Potential FUNKSTERS​ ​select an icon from the board​ to reveal a question. Funksters have to think on their feet, with a strict time limit of one minute, to give FUNKY answers.​The winner - based on audience votes - goes through to the next round.To get the Funk out - surf over to - https://funkythinkers.com/the-prism/#a_aid=5c7fc4a10b649&a_bid=93ccddbdRants and right angles https://funkythinkers.com/rants-and-right-anglesCould we feature YOU? https://funkythinkers.com/youTo make sure you never miss a FunkQuest episode - click https://funkythinkers.com/youtubeWhat did you think ? Leave a comment