DiscoverState of Wrestling by the NWCA 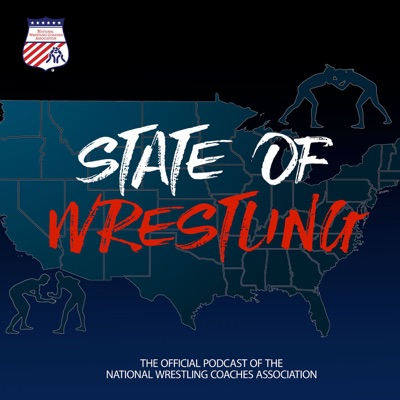 State of Wrestling by the NWCA

State of Wrestling is the official podcast of the National Wrestling Coaches Association. State of Wrestling will provide monthly updates on program initiatives on the growth of wrestling at the grassroots and collegiate levels. Get more information on the NWCA at www.nwcaonline.com. Part of the Mat Talk Podcast Network.
14 Episodes
Reverse 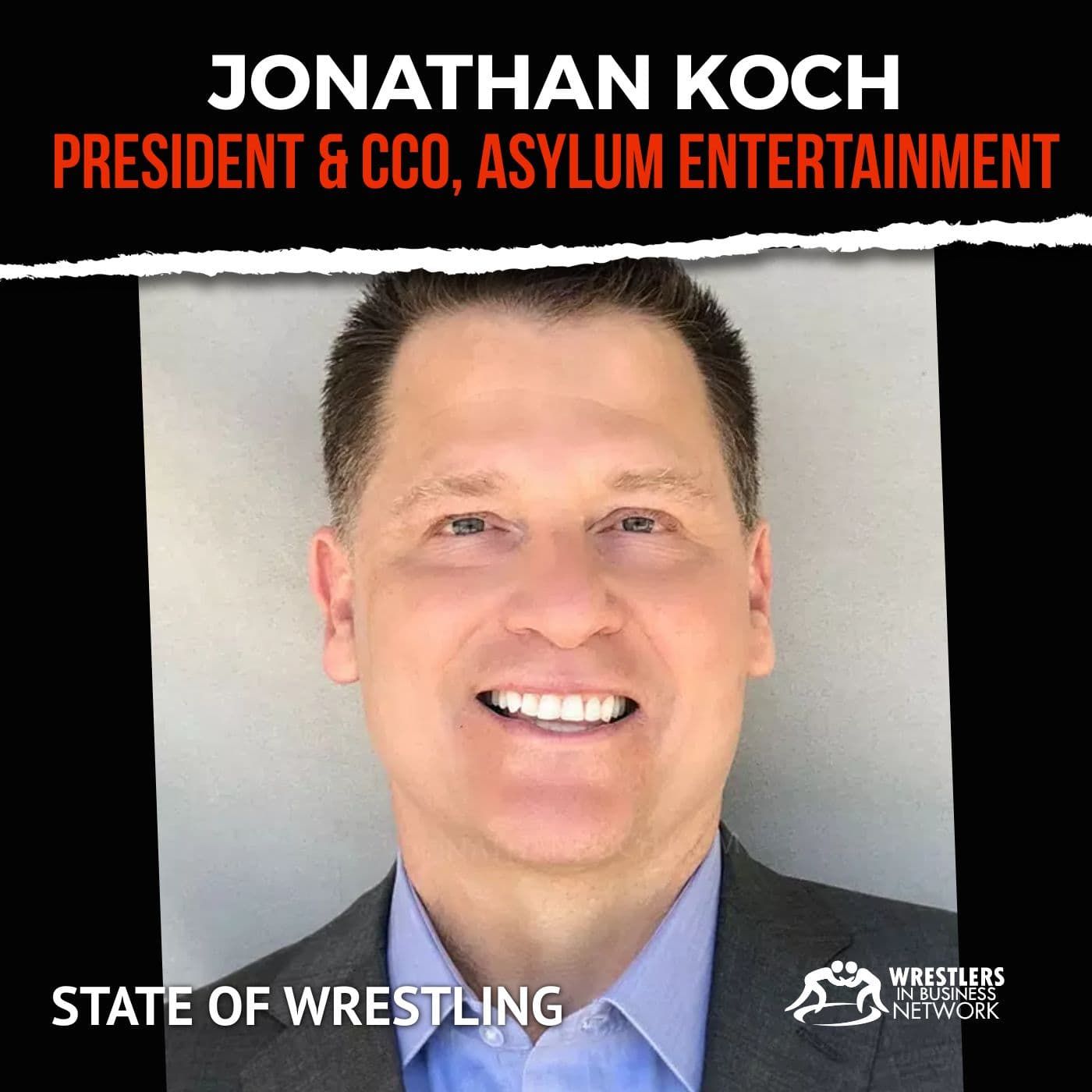 The June WIBN Speaker Series featured former wrestler and iconic Hollywood TV/Documentary producer, Jonathan Koch. Jonathan has a fantastic story which includes being one of the first successful recipients of a hand transplant. His story has been featured on many major television documentaries, and you won't be disappointed when you hear his messages. To learn more about Jonathan’s journey, check out https://www.jonathankoch.com/  The WIBN Speaker Series is part of the NWCA’s State of Wrestling Podcast. State of Wrestling by the NWCA is a monthly podcast by the National Wrestling Coaches Association Apple Podcasts | Google Podcasts | Spotify | Stitcher | iHeartRadio | Podcast Addict | Castbox | RSS 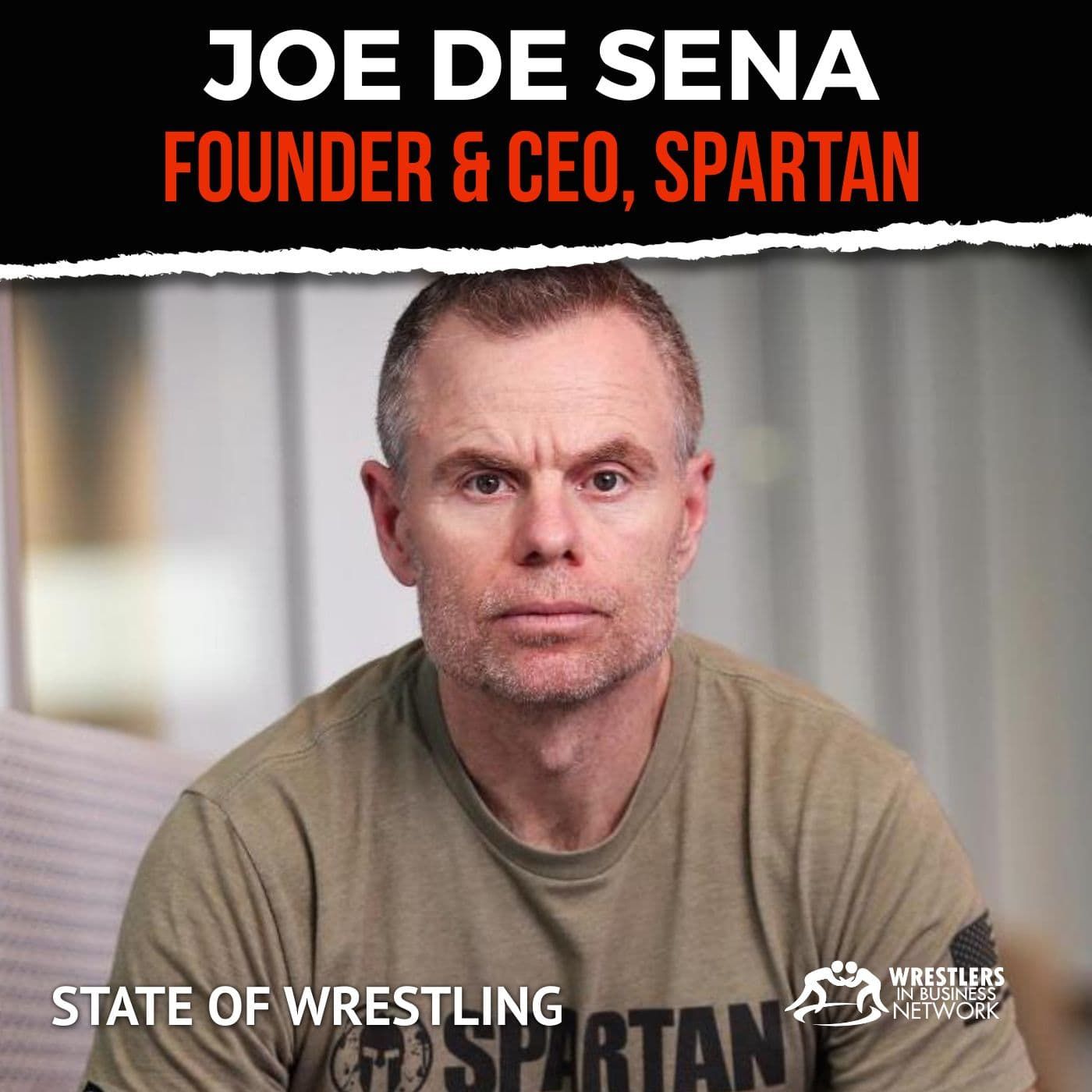 The latest guest in the Wrestlers In Business Network’s speaker series is Spartan founder and CEO Joe De Sena. A New York native, De Sena was never a wrestler, but through his time at Cornell Univeristy, he befriended head wrestling coach Rob Koll and is now an active member of the sport. From selling fireworks at age 8, to starting a t-shirt business in high school, to building a multimillion-dollar pool business in college, to creating a Wall Street trading firm, De Sena is a living definition of "entrepreneur." De Sena is the New York Times bestselling author of SPARTAN UP! A Take-No-Prisoners Guide to Overcoming Obstacles and Achieving Peak Performance in Life and SPARTAN FIT!  The WIBN Speaker Series is part of the NWCA’s State of Wrestling Podcast. 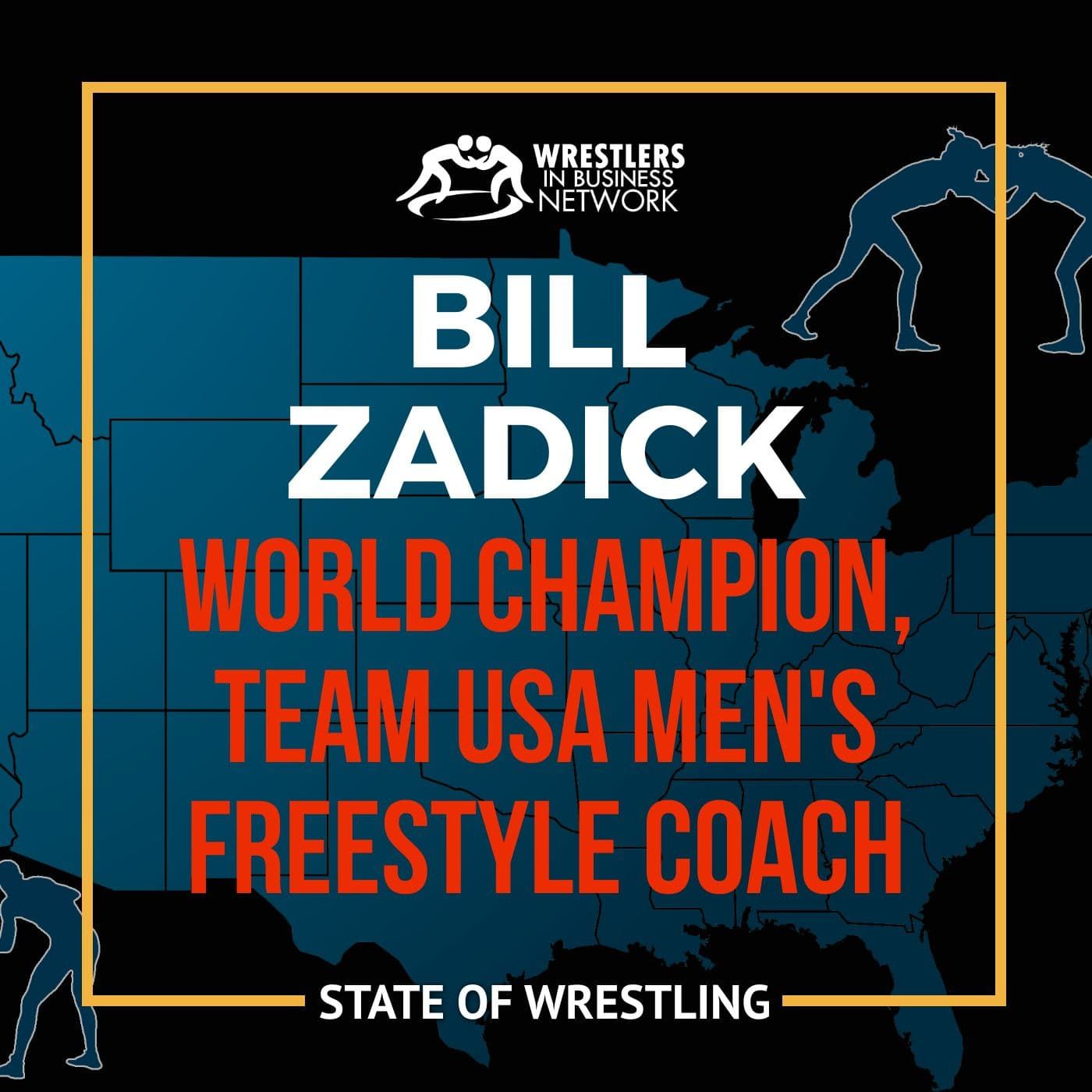 On March 11, World Champion and current Team USA Men’s Freestyle wrestling coach Bill Zadick joined the Philadelphia Chapter of the Wrestlers in Business Network for a virtual speaking engagement. Zadick discussed the landscape of freestyle wrestling, the rise back to prominence for Team USA, how he’s worked with a network of coaches around the country to build the team and how his day-to-day operations as a national team coach compare and contrast to working in business.Zadick also talks about his career as a wrestler and what’s driven him as a coach heading into the next Olympic cycle. He’s also talked about being a new father and how the work-life balance is important in the high pressure world of coaching.  The WIBN Speaker Series is part of the NWCA’s State of Wrestling Podcast. 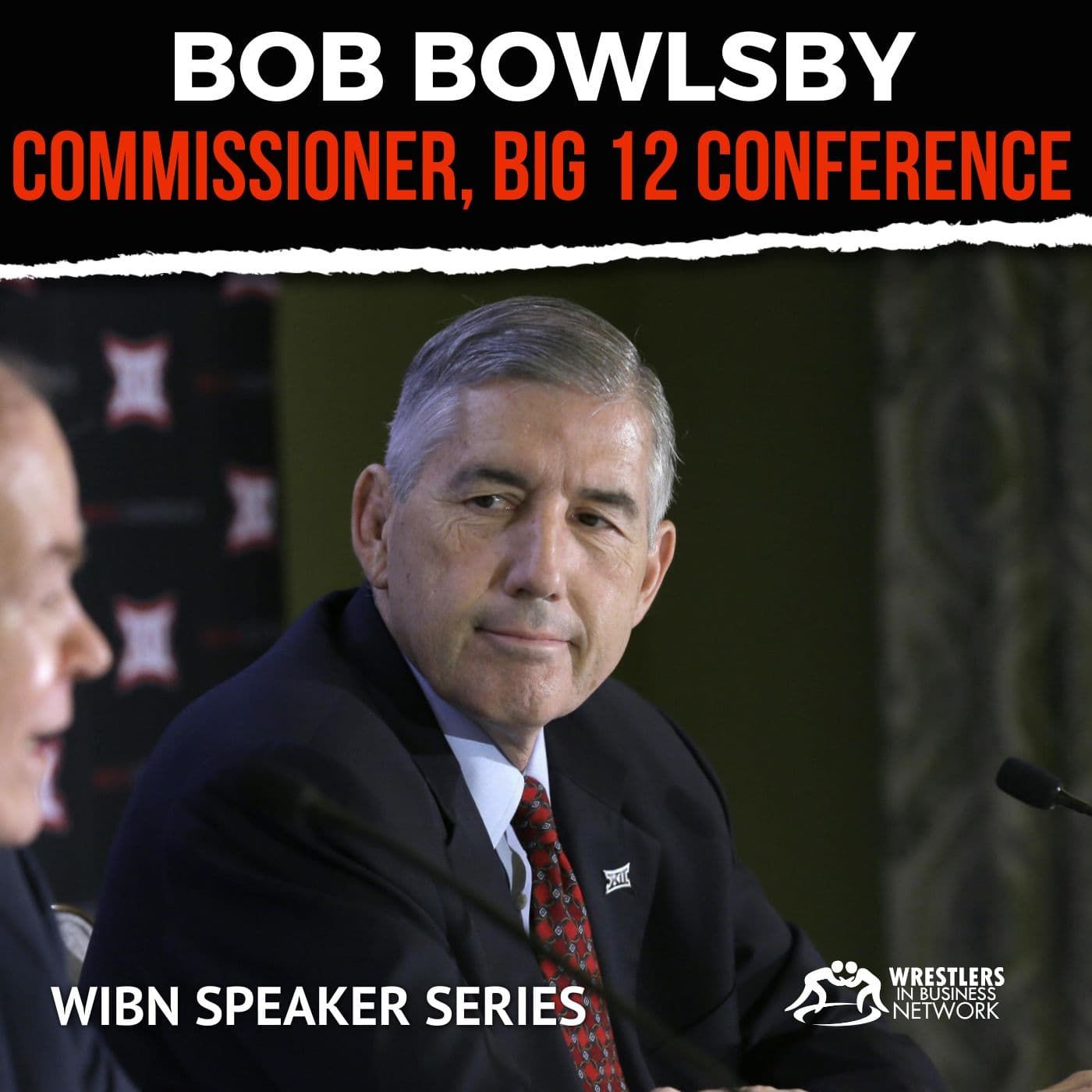 Bob Bowlsby has been the Commissioner of the Big 12 Conference since 2012. A native of Waterloo, Iowa, Bowlsby wrestled at Minnesota State Moorhead as a college athlete before getting into the world of college athletics administration. After leaving Moorhead, he took a job in athletics at Northern Iowa before ascending to the role of Athletics Director. He left UNI to take the same job at the University of Iowa. At Iowa, Bowlsby led the Hawkeyes athletic programs for 16 seasons, overseeing the merger of the men’s and women’s departments into one cohesive system. In 2006, Bowlsby headed to Stanford, where he was the Athletics Director for until he left for the Big 12 in 2012. Bowlsby will discuss his career and what it takes to lead a team, work with differing factions that pull decisions in every direction, trusting your team before diving into the landscape of college sports and the health of Division I wrestling.   The WIBN Speaker Series is part of the NWCA’s State of Wrestling Podcast. 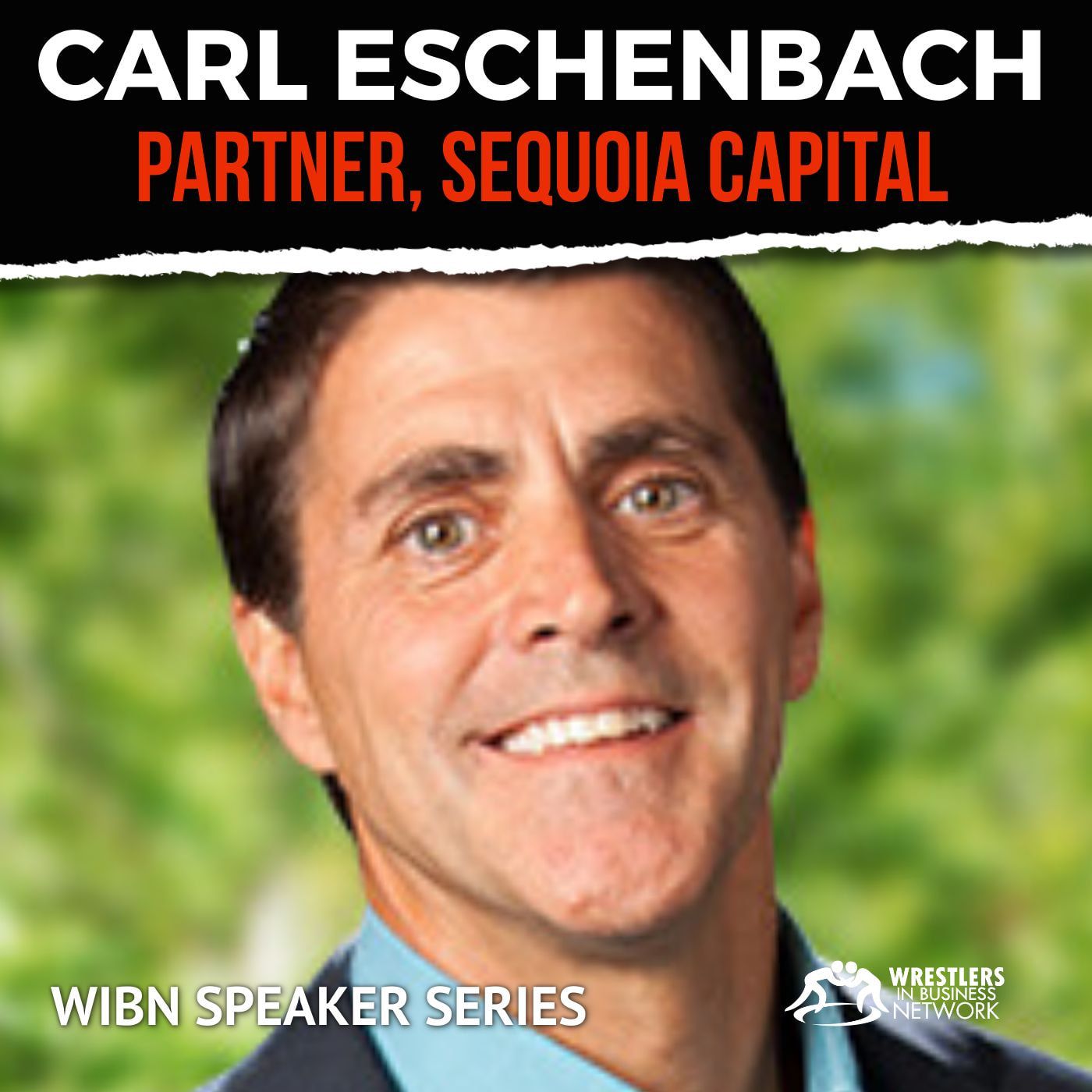 Carl Eschenbach is a Partner at Sequoia Capital and a former wrestler originally from the Lehigh Valley of Pennsylvania. Episode 9 of State of Wrestling kicks off the Wrestlers In Business Network Speaker Series with Eschenbach as he talks about leadership, business and technology and our current state of business affairs. Eschenbach will be inducted into the National Wrestling Hall of Fame as an Outstanding American in 2021, although he and his fellow induction class were set to be inducted in 2020 before the pandemic canceled Honors Weekend.   Eschenbach explains his background, his plans to wrestle in college, but how a personal change altered the course of his career.   The WIBN Speaker Series is a new inclusion into the NWCA’s State of Wrestling Podcast. 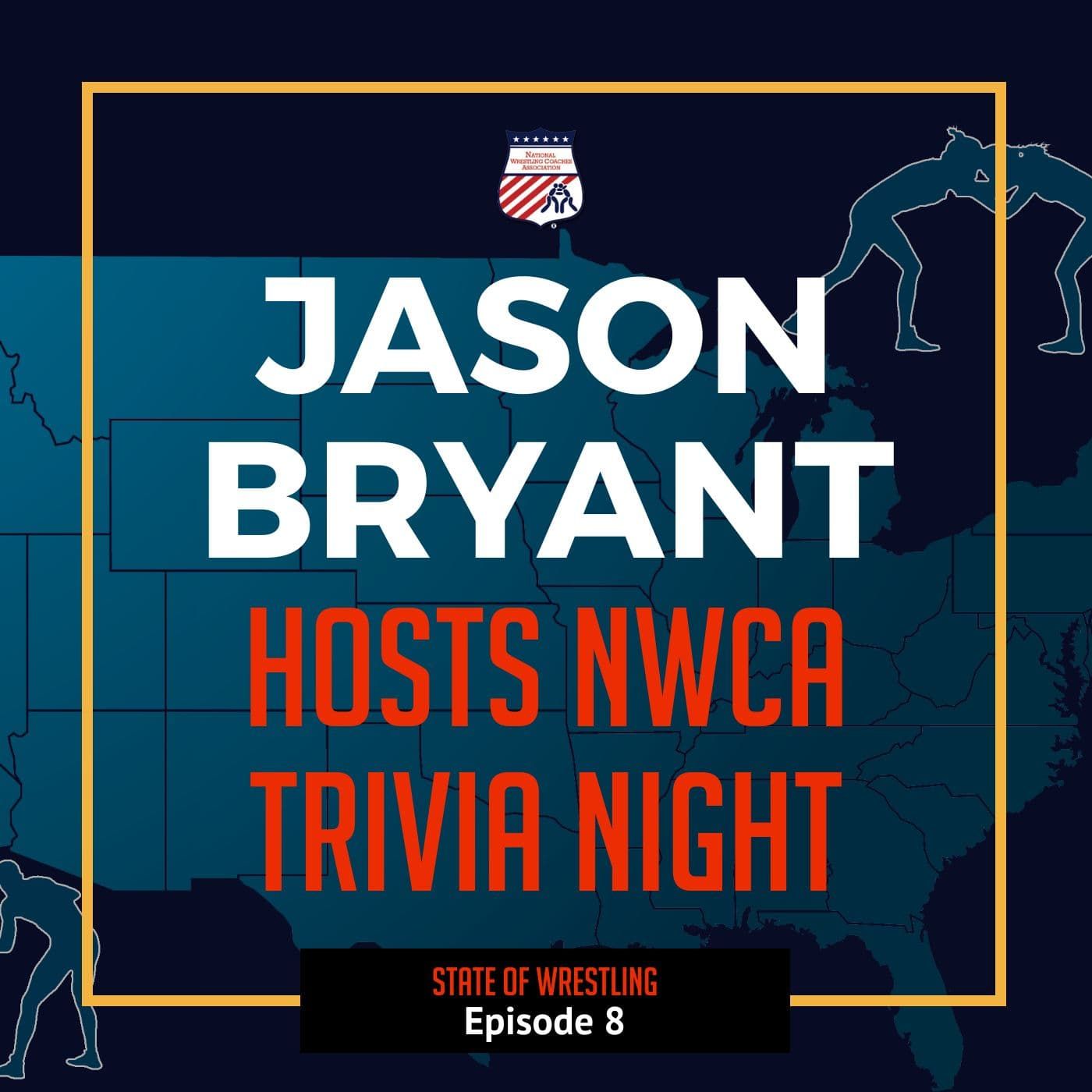 Jason Bryant of Mat Talk Online and the announcer at the NCAA Division I, Division III, NAIA, World and Olympic championships stops in to create and host the second NWCA Trivia Night. 40 questions, nearly impossible. How would you have done? 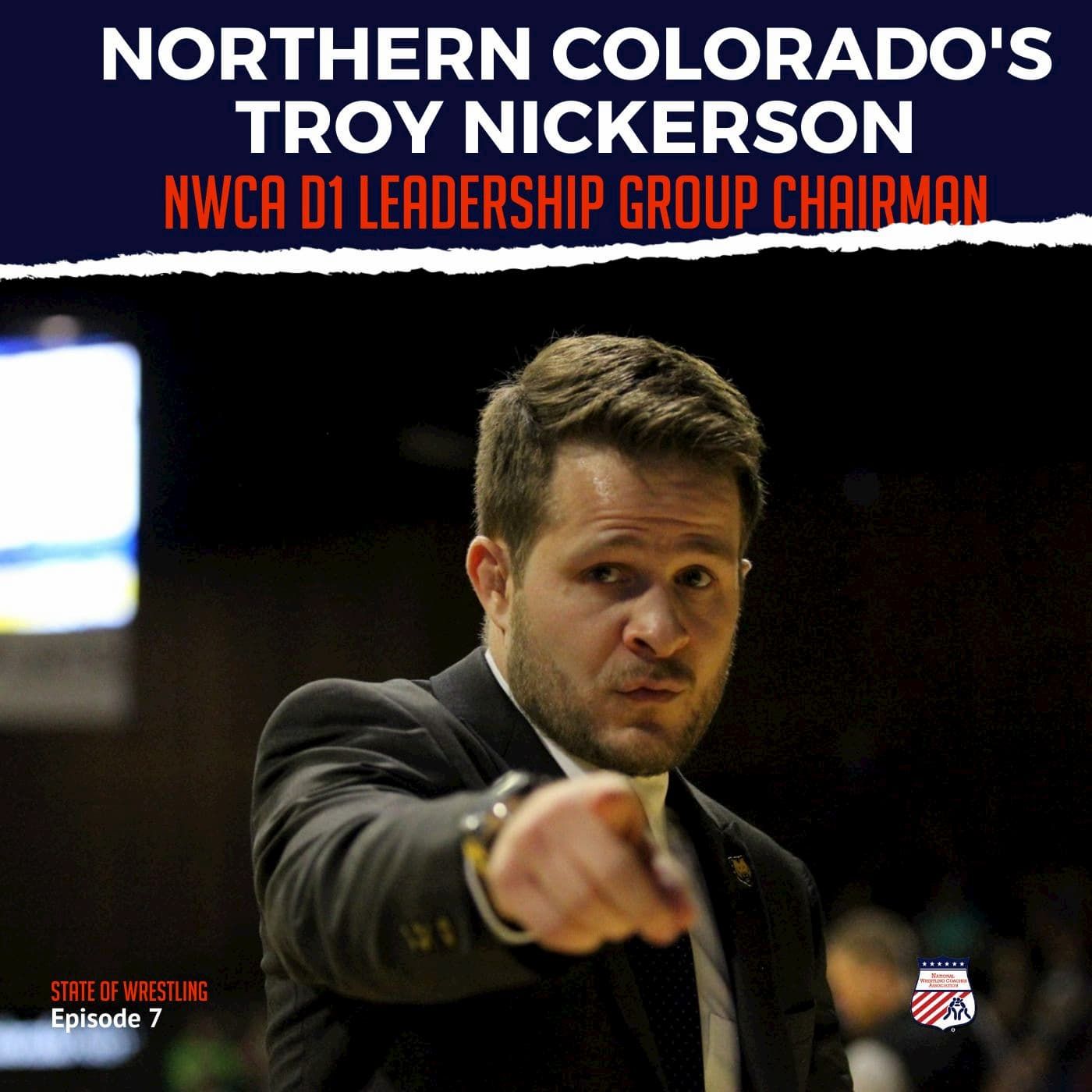 Troy Nickerson, head wrestling coach at the University of Northern Colorado in Greeley, Colorado, comes on the latest episode of State of Wrestling to discuss his role with the NWCA Division I Leadership Group, his tenure as head coach at Northern Colorado and what’s next for Division I wrestling.Nickerson looks on his experiences as an athlete and an assistant as to what’s guided him in his career as well as the promotion of assistant Garett Kiley on the staff and what came from the recent NWCA Convention, which was held virtually at the end of July. 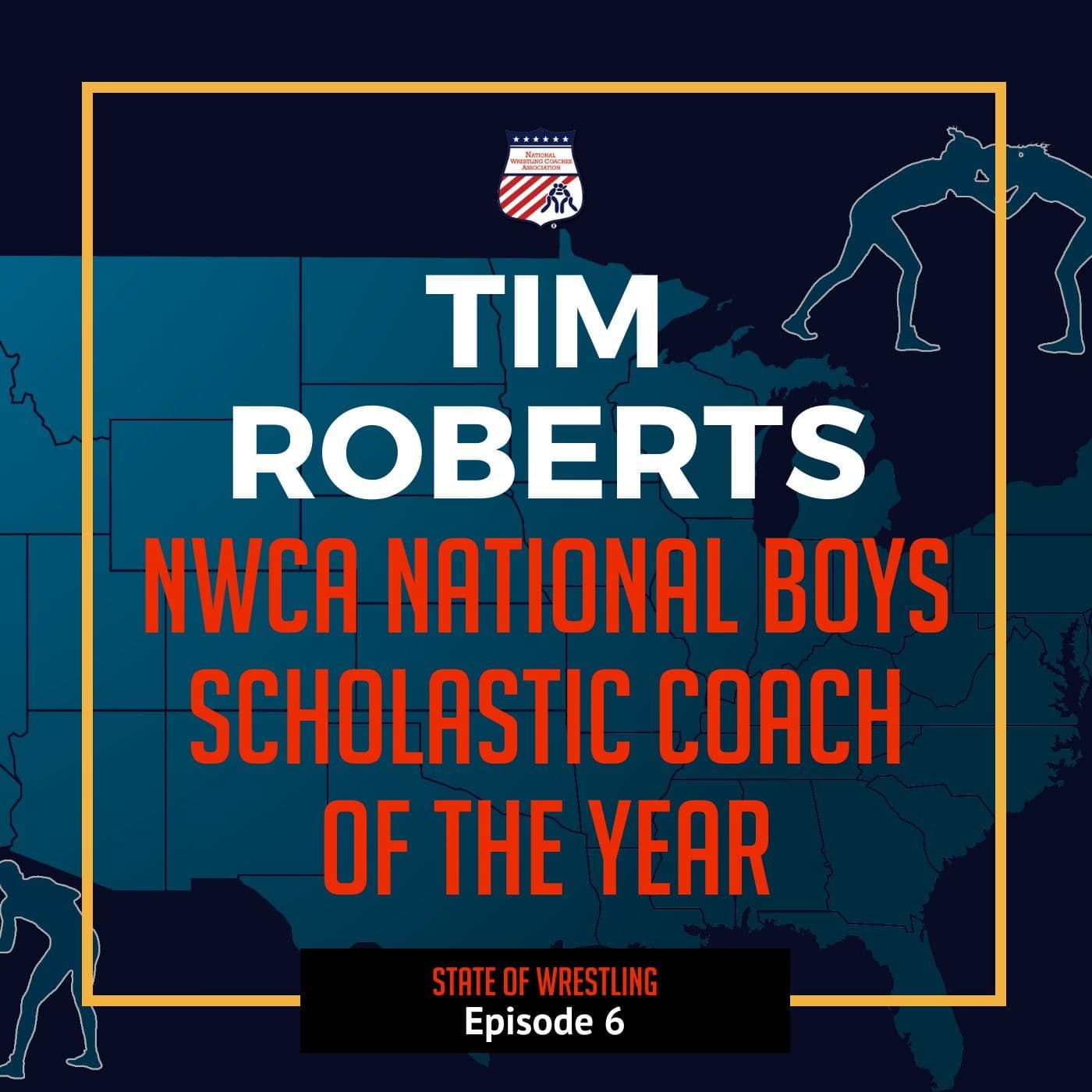 Episode 6 of State of Wrestling by the NWCA talks to Dundee (Mich.) High School head coach Tim Roberts. Earlier this month, Roberts was named the NWCA’s National Boys High School Coach of the Year. Roberts led Dundee to the 2019-20 Division 3 state team championship and also crowned seven individual state champions. Roberts has put Dundee on the map both within the state and the region, winning 12 team state championships. He’s been the head coach for the past 21 seasons and has been on the bench at his alma mater for 30 years. Roberts talks about his desire to get back into coaching, having a knack for it and what he’s been able to learn and adjust and evolve over the length of his 30-year career. 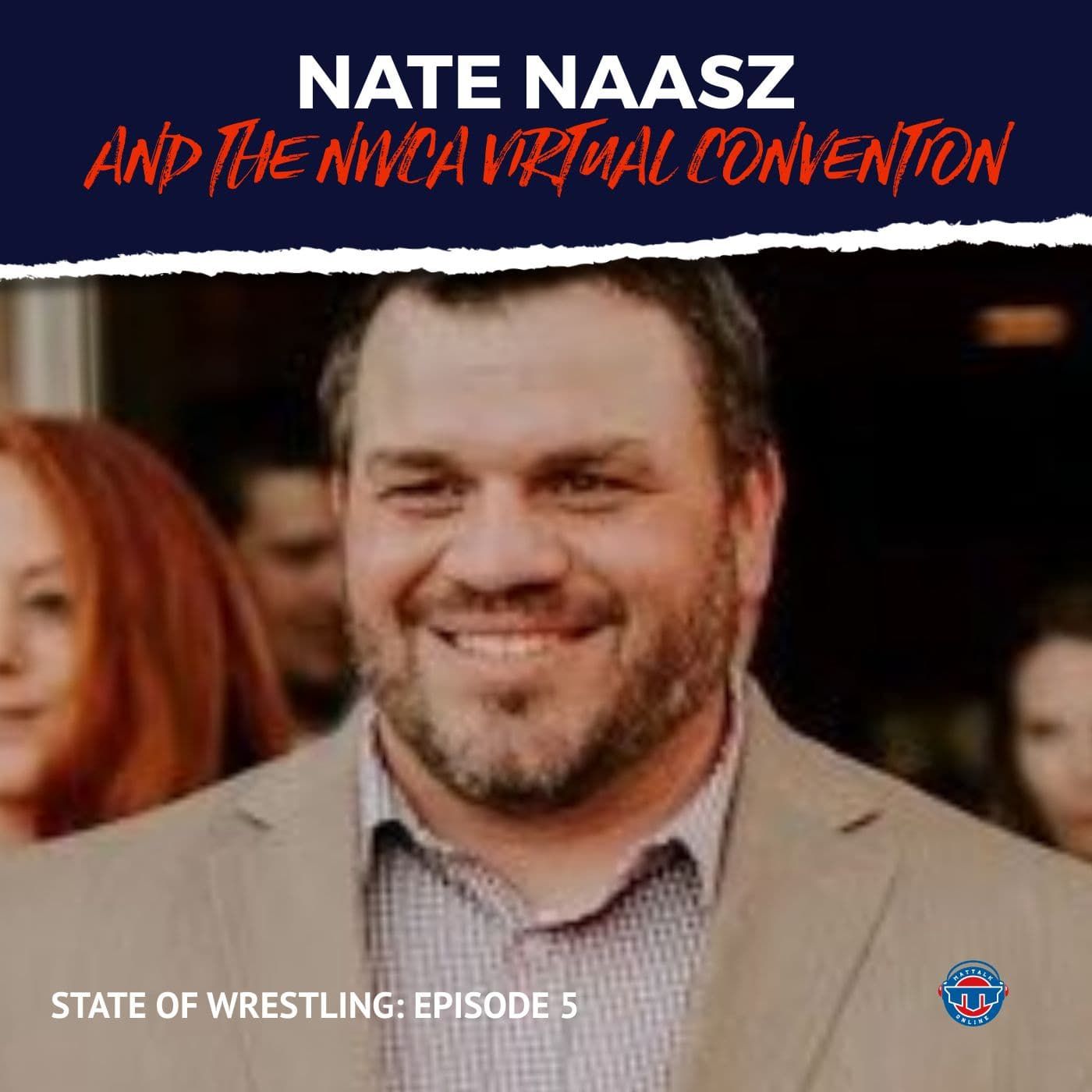 Nate Naasz of the NWCA comes back to State of Wrestling’s fifth episode to talk about the dynamics of working remotely in the world of wrestling and what the National Wrestling Coaches Association has been doing to continue working through the global pandemic. The key points of the episode are about the move to a virtual convention for 2020 as the NWCA Convention will take place online July 29-31, 2020. We touch on some of the keynotes, tease some of the sessions and talk about the growth and how the virtual convention may be a way to reach more coaches as well. 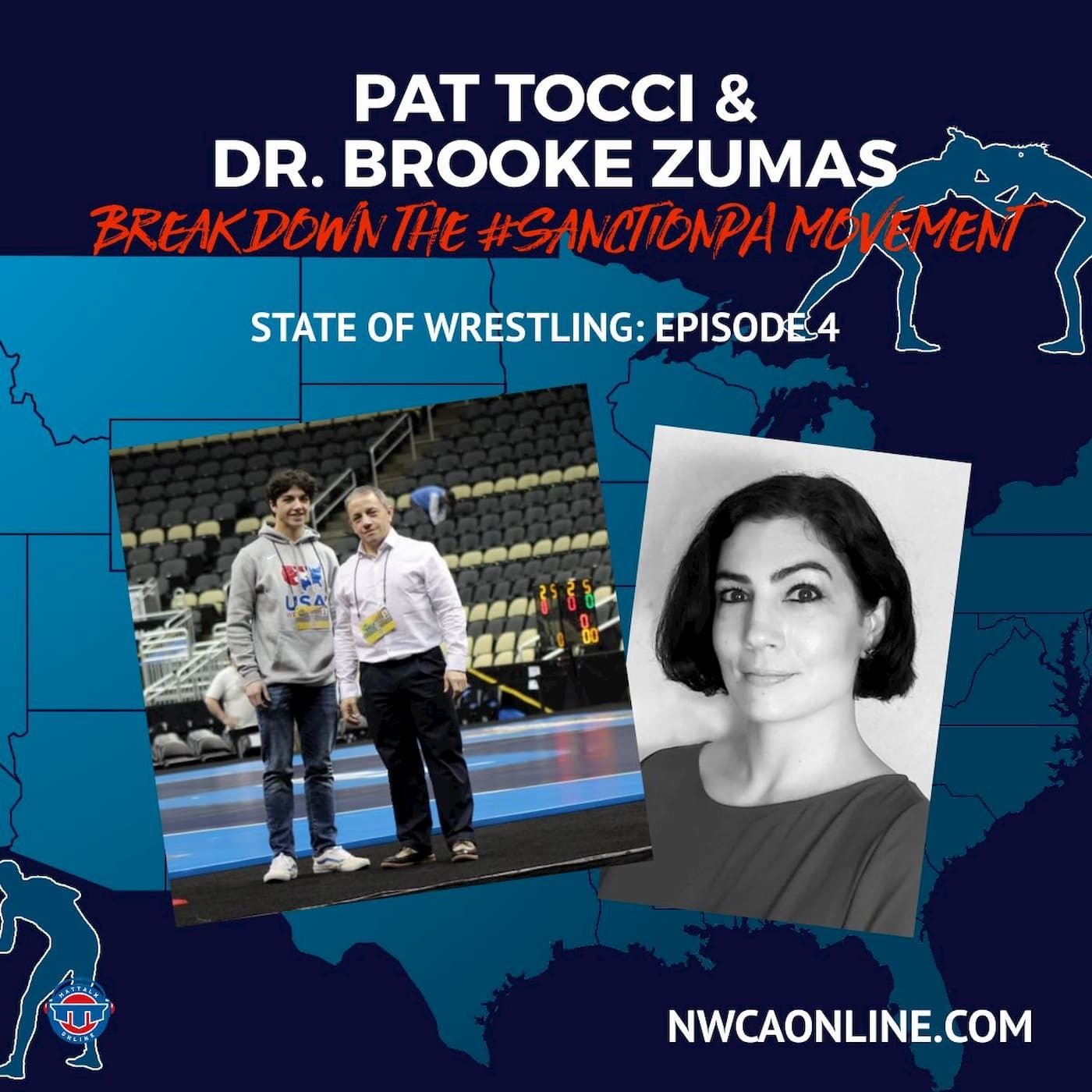 The #SanctionPA movement with Dr. Brooke Zumas and Pat Tocci

The fourth installment of the NWCA’s official podcast, State of Wrestling, visits with Dr. Brooke Zumas and NWCA Senior Director Pat Tocci to talk about the #SanctionPA movement. Pennsylvania is one of the top wrestling states in the country in terms of quality and reputation. Where it falls behind is its sanctioning of high school girls wrestling. Less-established wrestling states like New Mexico and Arkansas have announced they were set to sanction girls wrestling, so now the #SanctionPA movement, in association with Wrestle Like A Girl and a number of other organizations are showing the pathway to get things working in the Keystone State. Recently, J.P. McCaskey High School in Lancaster announced it would start a varsity girls wrestling team, the first PIAA-member school to do so. Zumas and Tocci explain what steps are needed for girls wrestling to become a reality at the PIAA. Learn more at www.sanctionpa.com 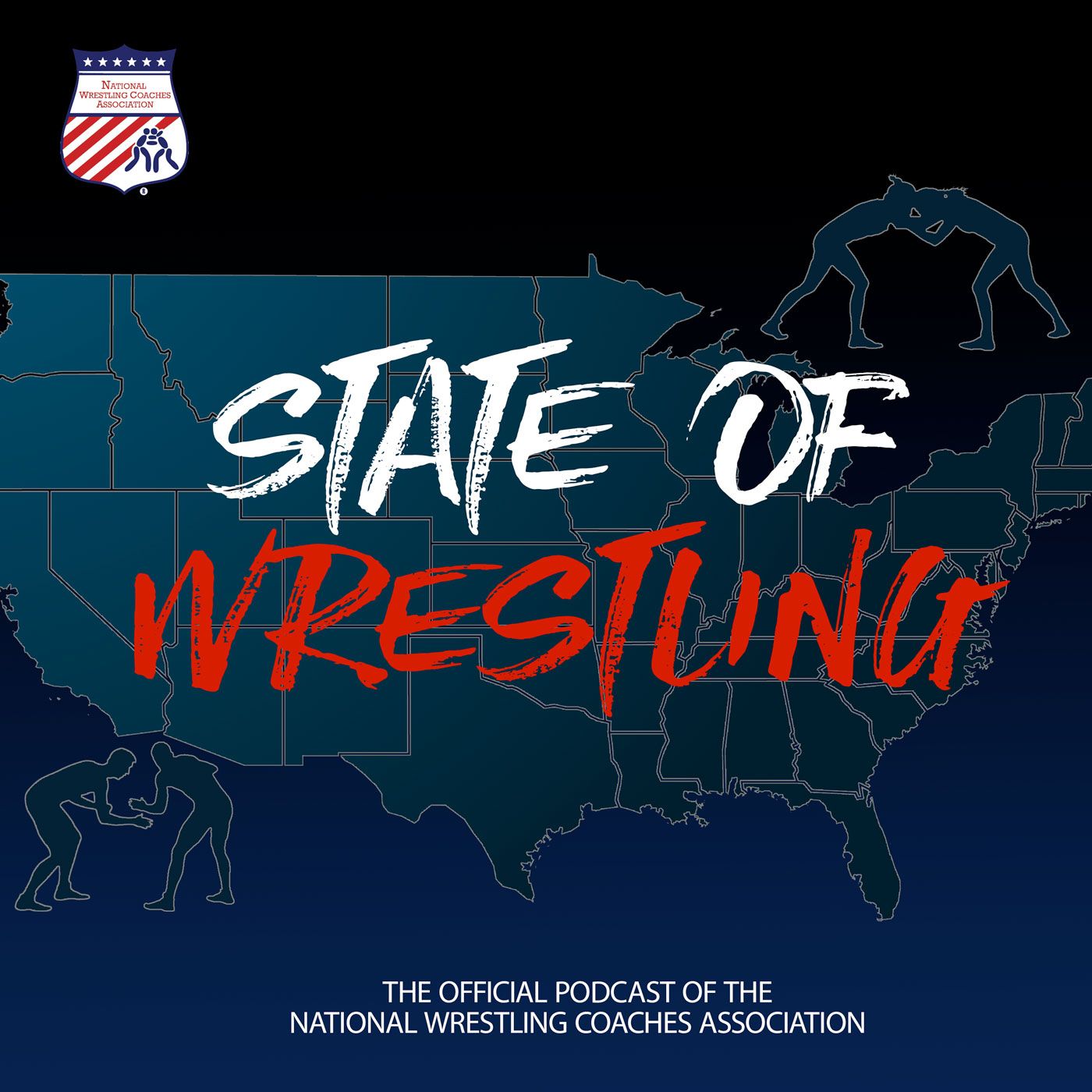 At the recent NCAA Convention in Anaheim, California, one piece of legislation wrestling leaders had their eye on was the vote on Emerging Sports status for women's wrestling. With 32 NCAA member schools fielding varsity wrestling programs, it seems as if it would only be a matter of time before women's wrestling became an NCAA sport.On Episode 3 of State of Wrestling by the NWCA, Sally Roberts and Julia Salata of Wrestle Like A Girl talk about the recent approval among Division II and Division III membership in approving women's wrestling as an emerging sport and what the future of women's college wrestling at all levels. Both explain their experiences wrestling in college in different eras and how the momentum continues to push forward with the aid of groups like the NWCA, USA Wrestling, the National Wrestling Hall of Fame and the Women's Sports Foundation. 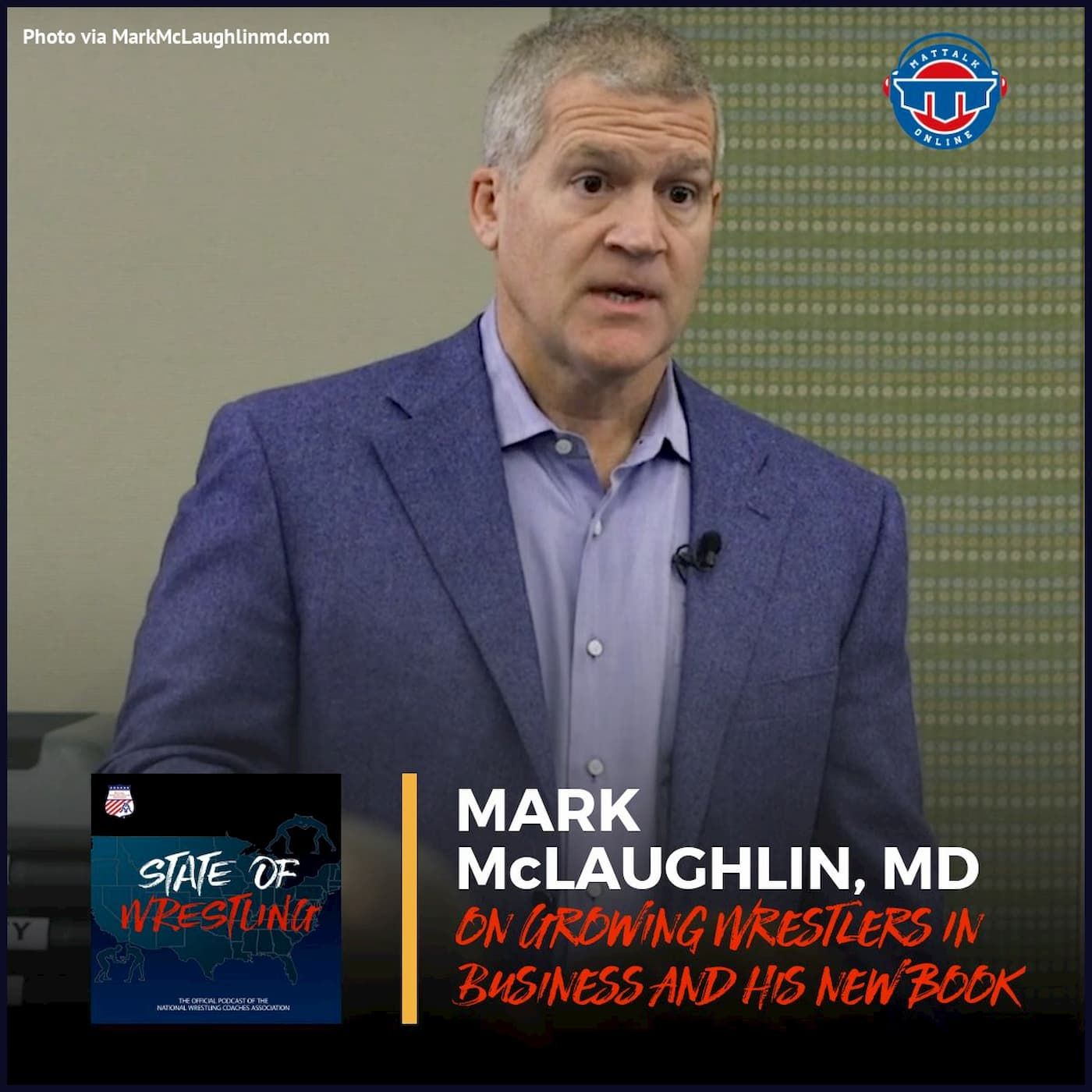 Dr. Mark McLaughlin on the WIBN and his book, Cognitive Dominance

Episode 2 of State of Wrestling is highlighted by an update from Nate Naasz, the NWCA's Communications and Marketing Coordinator. Nate will give us a quick introduction on who he is and his role with the NWCA and the upcoming events you can find NWCA materials and information at, such as this weekend's Beast of the East and the upcoming NWCA Multi-Divison National Duals in Louisville, Kentucky.Dr. Mark McLaughlin, a neurosurgeon at Princeton Brain, Spine and Sports Medicine is also the founder of the Princeton Chapter of the Wrestlers In Business Network, which is closely tied to the NWCA. Dr. McLaughlin will explain how his chapter was started, the benefits of the WIBN and how you can start up a chapter. Dr. McLaughlin also authored a new book called Cognitive Dominance: A Brain Surgeon's Quest to Out-Think Fear. We talk about the balances of writing and things in his own career that parallel his life in the medical field as well as those in the world fo wrestling.You can buy it on Amazon: https://www.amazon.com/dp/193689162XState of Wrestling by the NWCA is a monthly podcast by the National Wrestling Coaches Association. Apple Podcasts | Google Podcasts | Spotify | Stitcher | iHeartRadio | Podcast Addict | Castbox | RSS 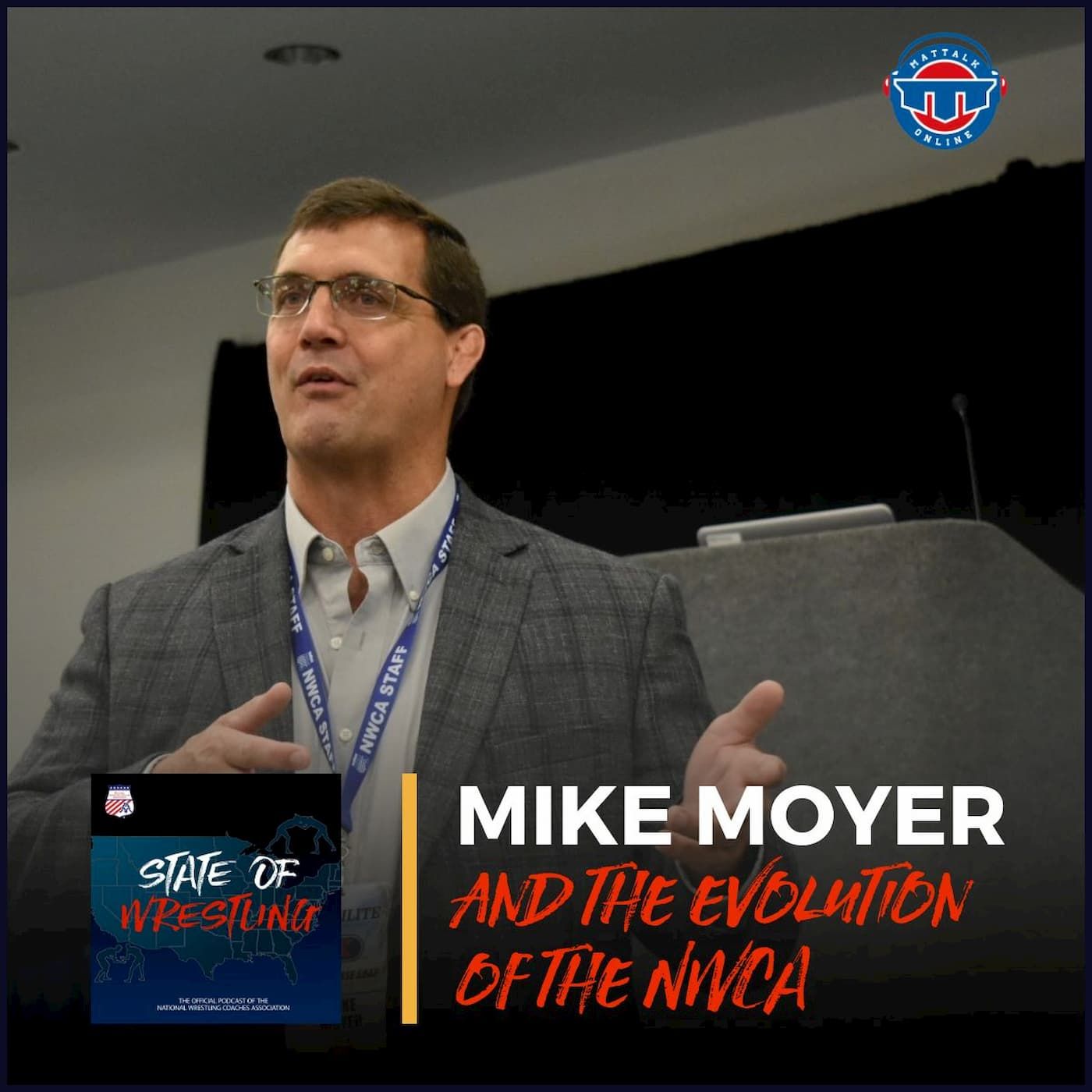 Mike Moyer on the evolution of the NWCA

The NWCA has launched a new organizational podcast called State of Wrestling, hosted by Jason Bryant of the Mat Talk Podcast Network. The podcast will give monthly updates on NWCA initiatives with staff, member coaches and leaders within the sport and the organization. Today, we kick off the show with Mike Moyer, the Executive Director of the National Wrestling Coaches Association. Some of the topics we discuss in the inaugural episode of State of Wrestling include:The NWCA has been in existence since 1928.The focus of the NWCA has shifted over the years.What are the key focus areas for the NWCA right now?What is the NWCA not? What are some of the checkboxes the NWCA looks for when targeting a school to add wrestling? State of Wrestling by the NWCA is a monthly podcast by the National Wrestling Coaches Association. Apple Podcasts | Google Podcasts | Spotify | Stitcher | iHeartRadio | Podcast Addict | Castbox | RSS

Trailer: State of Wrestling by the NWCA

State of Wrestling is the official podcast of the National Wrestling Coaches Association. Monthly updates will focus on the core competencies of the organization with a focus on strengthening existing programs, starting new ones and providing wrestling coaches with progressive educational opportunities. More information on the NWCA can be found at nwcaonline.com. Part of the Mat Talk Podcast Network.
See More
Comments