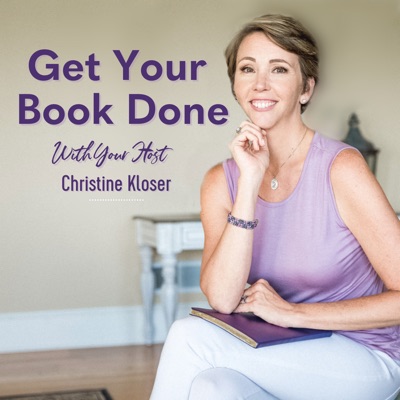 Get Your Book Done

Join USA Today and Wall Street Journal best-selling author, award-winning publisher and book writing coach, Christine Kloser, each week as she brings you deep-dive interviews with New York Times best-sellers, publishing industry leaders, everyday authors and marketing experts eager to help you make a difference with your message and experience publishing success… Because authorship is one of the most powerful things you can do to transform yourself, your readers, your business and ultimately the world. If you're a non-fiction author thinking about writing a book or already working on one -- this podcast is for you! Learn more about the podcast and Christine at www.christinekloser.com.
46 Episodes
Reverse

046 The Power of Forgiveness

You have a calling inside you – to transform the world, your readers, and yourself. Yet for some aspiring authors, that calling is stuck somewhere inside.  Maybe it’s stuck because of self-doubt or judgement or wondering “who am I” to write this book?  Enter Janie Aebi, today’s guest, to talk with you about the power […] The post 046 The Power of Forgiveness appeared first on Christine Kloser.

Seeing how much time, energy and effort goes into writing a book… most authors really want to “rock their book” once it’s released. One way to do that is through publicity and social media. Yet, the social media vortex can be a scary, uncertain, and confusing place. If you don’t know how to use it […] The post 043 Rock Your Book appeared first on Christine Kloser.

042 Stepping into the Uncomfortable Zone

Stop holding back from taking a step out of your comfort zone. If you reflect on any previous times you’ve done so, you’ll realize that you were likely met not with fear, but rather with excitement! It is the time before you actually take that step out of the “comfortable zone” that is the scary […] The post 042 Stepping into the Uncomfortable Zone appeared first on Christine Kloser.

041 Believing in Yourself and Your Book

Writing your book getting it published, and marketing your book can be a daunting task without the right team and trusted allies supporting you. Following your souls calling to write, forgive, heal, and stay true to whatever you believe in are the most important aspects to the book you need to write, not what is […] The post 041 Believing in Yourself and Your Book appeared first on Christine Kloser.

040 The Sacred Art of Authorship

When you think about the actual act of sitting down to write your book, what feelings come up? Do you feel stuck, overwhelmed or confused? Or do you feel invigorated, clear, motivated, and like your book is flowing through you with ease, grace, clarity and speed? Christine recognizes that the Sacred Art of Authorship is […] The post 040 The Sacred Art of Authorship appeared first on Christine Kloser.

039 How to Inspire Your Audience Through Public Speaking

Have you always thought that public speaking (in person and virtually) was something that was never meant for you? The guest today just might change your mind. Take a listen as Iman Aghay gives us insights into conquering our fear of public speaking by simply telling stories instead. It’s not about selling something to someone, […] The post 039 How to Inspire Your Audience Through Public Speaking appeared first on Christine Kloser.

038 Writing From The Heart

Have you ever read a book that was too “heady” to read?  Where the author wrote about something, yet without any feeling of true connection to what they were writing about?  Today’s guest couldn’t be farther from that type of author. Veronica has used her challenging life experiences to offer hope and inspiration to others.  […] The post 038 Writing From The Heart appeared first on Christine Kloser.

037 How to Trust Your Vibes as an Author

036 The Power of Synchronicity

Why do things happen the way they do? Is it all just coincidence or does everything happen for a reason?  Is there a bigger power at work? And how might this impact you and your book?  Tune in to hear Dr. Ken talk about the power of synchronicity, how it’s at play in every aspect […] The post 036 The Power of Synchronicity appeared first on Christine Kloser.

035 How to Sell Thousands of Books at Once

Imagine if you could sell thousands of books at once.  Not only would you make a lot more money than selling books one at a time, but more important than that… you’d reach a lot more readers with your book, and change more lives!  This is what the world of “special sales” makes possible for […] The post 035 How to Sell Thousands of Books at Once appeared first on Christine Kloser.

In this episode, Christine answers REAL questions from members of her Facebook group about book writing, publishing and marketing a transformational book.  Topics she covers include how to determine the best length for your book, how to approach platform building and how to manage the overwhelm of too much content.   In this episode, Christine discusses: […] The post 034 Q and A with Christine appeared first on Christine Kloser.

033 How Authorship Can Transform Crisis into Opportunity

In times like these, authors have an amazing opportunity to provide much needed support, strategies and service to their readers.   That’s exactly what guest Pete did.  And, he transformed our current crisis into a huge opportunity for timely guidance to readers who needed it… and fast!  Pete will discuss how he was able to […] The post 033 How Authorship Can Transform Crisis into Opportunity appeared first on Christine Kloser.

Are you unsure how to leverage the ever-growing world of social media to market and sell your books? Best selling author Daniel Hall is here to tell you how to get your book noticed and give you some marketing tips that get you incredible visibility… and clicks to your website or book page on Amazon. […] The post 032 Daniel Hall: How to Leverage Social Media to Sell More Books appeared first on Christine Kloser.

031 FLASHBACK: Lisa Nichols:  Making a Difference With Your Message

Do you ever stop and wonder who you are and who you want to become? Transforming yourself is all about your mindset. After your mindset changes your lifestyle will naturally follow. Clearly identify where you are and where you want to be and then make an action list and visualize what your goal will look […] The post 031 FLASHBACK: Lisa Nichols:  Making a Difference With Your Message appeared first on Christine Kloser.

030 SARK: How To Write No Matter What

We all have moments when we allow our inner critics to sabotage our efforts to fulfill our purpose. Life happens, and waiting for the perfect time and perfect circumstances to write will leave you with blank pages and anxiety. Listen to today’s episode to learn from inspirational New York Times best-selling author and motivational speaker […] The post 030 SARK: How To Write No Matter What appeared first on Christine Kloser.

029 Alinka Rutkowska: How To Prepare For Bestseller Success

Have you wondered what it might look like to be a bestseller, but you aren’t sure you could ever get there? Believe it or not, it’s possible for any author.  The first step is to be prepared to create that success. On today’s episode  author and expert book marketer, Alinka Rutkowska, shares tips on how […] The post 029 Alinka Rutkowska: How To Prepare For Bestseller Success appeared first on Christine Kloser.

028 Dr. Reggie Blount: A Conversation About Healing The Racial Divide

Humanity was shaken by the public murder  of George Floyd at  the hand of the police..    In that moment, the world shifted on its axis.  Anger, rage, sadness, grief, and pain are being felt and expressed  across the globe.  So much to be said, so much healing to happen, so much change needed.  And, […] The post 028 Dr. Reggie Blount: A Conversation About Healing The Racial Divide appeared first on Christine Kloser.

027 Lisa Barnett: The Key To Getting Your Book Done

Have you ever had the experience of just being in the flow, feeling the words come through you as if from some higher source? Imagine if you could have the support and resources to help you trust that space and stay motivated to get your book done and share your message. You can! Listen to […] The post 027 Lisa Barnett: The Key To Getting Your Book Done appeared first on Christine Kloser.
See More
Comments