Conversations with the doers and the inventors, on how they build products of impact in India.
Hosted by Pankaj Mishra.
8 Episodes
Reverse 8: The Playbook: Manisha Raisinghani of LogiNext on what it takes to build an enterprise startup

Startups are mostly associated with non-hierarchical organisation structures, cool workplaces and at times, overall disdain for “boring processes.” However, if the past decade of flamboyant startups and their maverick founders are anything to go by, perhaps there is a greater value in building “boring startups”; the ones that are predictable, are aiming to earn monies from the day one, and follow conventional rules of business.    For this episode of The Playbook podcast, I sat down with Manisha Raisiunghani (https://www.linkedin.com/pulse/billion-data-points-loginext-reaches-milestone-most-raisinghani/) , cofounder and the CTO of LogiNext. Manisha had an early career as a software engineer at Mastek. After losing her job during the post-Lehman banking crisis, she reinvigorated her career to finally launch LogiNext.    Tune in to learn more 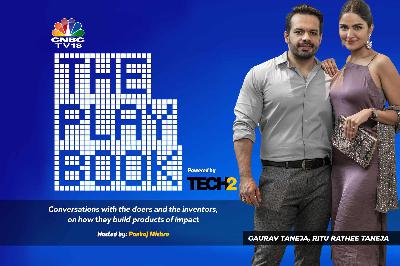 Gaurav Taneja and his wife Ritu Rathee Taneja are aviators, social media influencers and parents to their 3-year-old daughter, Kyra.    In this episode of the Playbook Podcast, I sit down with them to discuss how do they manage alternate careers, mental stress, family relationships and the pressures of being YouTube influencers.  ​ Tune in and listen to the Flying Beast.   Also, on February 14 and 15, you can hang out with Gaurav and Ritu at GMR Grounds, New Delhi, for Tech2 Innovate (https://www.firstpost.com/tech2-innovate/) , India's biggest youth festival celebrating technology, innovation and culture.

6: The Playbook: Monkeybox founder Sanjay Rao on rebuilding his startup after the shutdown

Entrepreneurial comebacks are rare and extremely tough. But then, founders are known to bounce back after failed startups.    However, reinventing the same startup after shutting it down ranks amongst the rarest of rare.    Meet Monkeybox founder Sanjay Rao. Nearly two years after shutting down the startup, Rao is launching it again. He’s applying all the lessons from the failure.    When it announced “a temporary shutdown” in March 2018, Monkeybox was delivering around 10,000 meals to school kids every day.    “We didn’t want to compromise on the quality of our means and services, so we had to shut it down. Now, the parents and schools we worked with want us back, and we have new backers too,“ he says.    Tune in, and listen to the Monkeybox story. 5: The Playbook: Lakshmi Pratury on lessons from TED and INK Talks in building communities

Great communities make products happen. Some of the world’s most successful products from iPhones to Netflix, Tik Tok and so on, are shaped by communities of users who love them. TED, is another example. Lakshmi Pratury co-hosted TED in Mysore in 2009, along with Chris Anderson. Later on, she founded INK Talks. “My biggest learning from building communities is not to have any purpose at all, at least while starting,” she tells me in this episode of The Playbook. “Sense of purpose can make your relationship with the community very transactional.” Tune in! 4: The Playbook: How Thirukumaran Nagarajan is applying learning from failures in building Ninjacart

What do you do when you’re 35 and you’ve had six startup failures already? You apply all the learnings to build one of the most valuable startups. In this week’s Playbook podcast, I sat down with Thirukumaran Nagarajan, co-founder and CEO of Ninjacart, a B2B fresh produce startup. Ninjacart uses machine learning, data analytics and IoT devices to help farmers sell directly to the retailers every day.  “Over the past few years, we’ve pivoted multiple times and gone nearly bankrupt too. Staying bluntly honest with our investors and employees has helped us shape Ninjacart,” he says.    Tune in. 3: Vinod Muthukrishnan on building Cloudcherry, and the journey through the startup valley of death

In August this year, Cisco acquired (https://www.cisco.com/c/en/us/about/corporate-strategy-office/acquisitions/cloudcherry.html) Bangalore-based customer analytics startup, Cloudcherry, for over $50 million. While the deal did make the headlines, what’s been missing since then is the quiet and at times painfully slow journey Cloudcherry went through before getting acquired. It’s also a story of not just the founder’s grit and persistence, but most importantly the employees of Cloudcherry who stayed and fought the quiet battles.    For Vinod Muthukrishnan, it’s been a journey that also changed him as a person, making him realise what it really takes to build an organisational culture that lasts.    “When we started, we ran out of money during the first four months itself. And till our first anniversary, some friend would come visiting and I will sell them the vision. Each of them, in fact six of them, kept investing monies funding our payroll and vendor payments all through the first year. Today, all of them have made good returns,” he tells me.    Tune in. 2: The Playbook: Samir Bodas of Icertis on building a SaaS unicorn, life lessons from cancer

Far from the glory and noise of consumer internet startups, a new breed of enterprise software entrepreneurs is quietly building this decade’s most valuable companies. Zoho, Freshworks, BrowserStack, to name a few, are shining examples of such enterprises. Add Icertis, which is based in Seattle and Pune, to that list. Icertis is a startup that helps some of the world’s biggest companies manage their contracts better. Founded in 2009 by Samir Bodas and Monish Darda, Icertis has raised around $200 million so far and has annual revenues of around $80 million. I caught up with Bodas to gather the journey of Icertis. During the chat, he dropped a bombshell. “Late last year, I was diagnosed with cancer, but not a serious one, but I still had to be away for over a quarter,” Bodas told me in this podcast. Surely, the bad news must have had an adverse impact on Icertis. Not really, according to Bodas. “While I was away, the company performed the best ever in our history,” he told me. Bodas’ absence did change the way of Icertis was run. “I had to reinvent myself and apply myself in a different way. I went through this phase where I immersed myself in research. The way I engage with the company today is very different from how I did it last year,” he says. “I focus on very different things now. I now focus on our three-year strategy and not just quarterly performance. I had to pivot. “ Tune in to learn how to build a unicorn startup from the Icertis playbook. 1: The Playbook: What makes a great product leader

Welcome to this episode of The Playbook. Every Friday, I will be bringing deep conversations with the doers and the inventors on how they build products of impact.     For over two decades, Deep Nishar, now a managing partner with SoftBank, has built products at companies such as LinkedIn and Google. In this episode of the Playbook, he shares lessons from building products that shipped successfully, and the ones that failed.    "A great product manager has the brain of an engineer, heart of a designer and tongue of a diplomat.”   Do tune in, and please do share your feedback with me at pankaj.mishra@nw18.com (mailto:pankaj.mishra@nw18.com)
See More
Comments