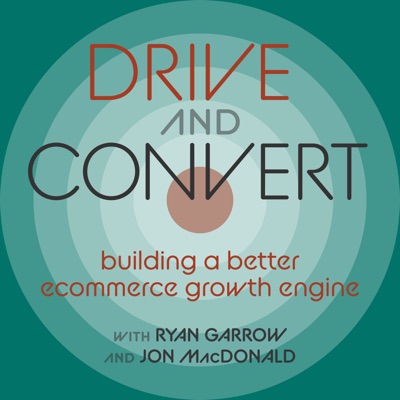 Hosts Jon MacDonald and Ryan Garrow want to help businesses be more effective at driving high quality traffic to your site, and making sure that traffic converts from a visitor to a buyer, by sharing the secrets that have helped some of the brands big and small to drive the right traffic to their sites, and convert that traffic into customers at a rate well above their peers.
31 Episodes
Reverse

Episode 30: Data at Each Stage of your Company

Episode 29: How to Compete Online with a Small Budget

Today, Jon & Ryan talk about how Digital Marketing and CRO work together to create a scenario where one plus one really equals three or four. When these combine it It becomes an explosion of revenue and profit. Today the guys why it is that these two things work so well together.

The official data from the Census Bureau has stated that through Q3, e-commerce was up 32% year-over-year in 2020. By no means should a company complain when they're up 32% during a pandemic, but there are times when a company should be concerned when they have 32% year-over-year growth. That sounds backwards, but business owners and marketing teams should have regular fear of missing out or FOMO, to help make sure that their brands aren't falling behind their competitors. Even when the numbers look good. That's the best time you can have all the cash in the world to reinvest. Today Ryan shows you how to push for more in 2021.

How does one break down optimization into some key principles? In episode #24, Jon started talking through his eight laws of conversion. The first four were: It's hard to read the label from inside the jar. People come to your website for only two reasons: to purchase, or to research. Your goals are aligned with customers, both of you want a conversion. Competitive research is not data. Today, Jon and Ryan pick up where they left out and give you Jon's final four laws of conversions. www.thegood.com

Episode 25: Are You Missing Out?

As business owners, we’re always worried about missing out. Many businesses owners we talk with seem to regularly have FOMO (fear of missing out) when it comes to marketing: Are my goals right? Was optimization right? Was there an area of the market I didn’t pay attention to? During holiday periods, which is when we are recording this, everything is intensified and I find most business owners are stressed about this more. Especially in a year like 2020. Today we dive deeper into the details of how a business owner can uncover where they are missing out on valuable traffic, and therefore revenue… and if their FOMO is valid. Connect with Ryan: https://www.linkedin.com/in/ryangarrow/

Episode 24: Laws of Conversion (Part One)

Today, is the first in a two part series about the first four principles of the world of Conversion Rate Optimization. What are these fundamental truths, and how can I break down optimization from a high level to not focus so much on the tactics? Everybody goes directly to the tactics, but what are the overarching things that a brand needs to know and be thinking about? Today, Jon breaks it all down.

Episode 23: Amazon: How and Why to Drive Traffic

It's hard to talk about E-commerce and driving traffic without thinking about Amazon. How do you find new customers there? Should you run on ads on Amazon? Ryan has the answers! For help with your Amazon Advertising: https://www.logicalposition.com/amazon-advertising-management

Episode 22: 7 Types of Customers and How to Convert Each of Them

Episode 21: What does YOUR data say about Cyber Week?

Episode 19: Is All Traffic Good Traffic?

Episode 15: Buy on Google and Your Brand

Episode 14: The Future of CRO