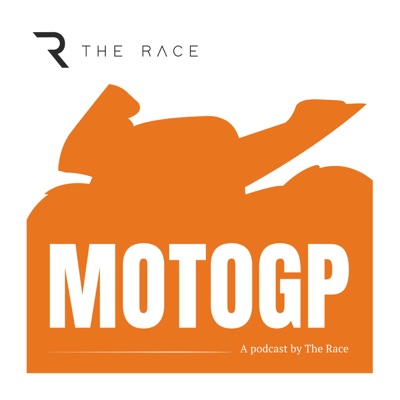 Everything you need to know from the fascinating world of MotoGP racing, with host Toby Moody, The-Race.com's MotoGP correspondent Simon Patterson, plus special guests. We'll be talking about all the races, the big storylines, and taking the occasional trip back into the sport's rich history as well. Join us for the ride!
62 Episodes
Reverse

The post-San Marino Grand Prix edition of The Race MotoGP podcast centres on the battle between Francesco Bagnaia and Fabio Quartararo.Jack Miller's role in helping Bagnaia win the Misano battle is flagged up, even if the Italian remains unlikely to win the war given Quartararo's 48-point advantage.There's also a chat about Suzuki's season given the latest frustrating outing for Joan Mir and Alex Rins, and a look at the current slumps faced by Johann Zarco and Miguel Oliveira.Finally, Misano star Enea Bastianini gets his due credit, while the efforts of big-name returnees Franco Morbidelli and Andrea Dovizioso are also assessed.

After the stunning battle for victory between Pecco Bagnaia and Marc Marquez at Aragon, Toby Moody, Simon Patterson and Valentin Khorounzhiy look at what the outcome told us about both riders and how the hierarchy of talent at Ducati is shifting. There's also discussion of why Fabio Quartararo was off the pace, how he limited the damage to his championship lead, a sense of frustration for reigning champion Joan Mir at Suzuki, plus Maverick Vinales' Aprilia debut and what's going on with the plans for Valentino Rossi's VR46 team in 2022.

Is the 2021 MotoGP title race now over? Toby Moody, Simon Patterson and Valentin Khorounzhiy reflect on a commanding victory for Fabio Quartararo and discuss all the other major talking points from the Silverstone weekend, including Aprilia's first podium, whether Pol Espargaro's pole position was a sign of a genuine turnaround, and what his Honda team-mate Marc Marquez was doing when he clumsily took Jorge Martin out of the race on the opening lap.

The Austrian Grand Prix was decided in a tense and at times terrifying final couple of laps, as riders who had switched to wet-weather tyres hunted down those who stayed out on slicks - and could barely keep their bikes upright - when the rain hit.Toby Moody, Simon Patterson and Valentin Khorounzhiy discuss all the major talking points from the second weekend at the Red Bull Ring, including how Brad Binder made his tyre gamble pay off, what it means for KTM to win in Austria again, Fabio Quartararo's incredible aggression during the dry part of the race, Marc Marquez's fall after one of his better Sunday performances, and if 'flag to flag' racing really has a place in MotoGP.We also react to the latest news around Maverick Vinales' future, as his Aprilia deal was made official on Monday following his suspension by Yamaha for the Austrian GP weekend.

Why Yamaha has suspended Vinales

A major shock ran through the MotoGP paddock in Austria on Thursday when it was revealed Yamaha had suspended its rider Maverick Vinales due to “unexplained irregular operation of the motorcycle by the rider during last weekend” in the Styrian GP. Toby Moody, Simon Patterson and Valentin Khorounzhiy get together for a special episode of The Race MotoGP Podcast to discuss what's going on.

MotoGP returned from its summer break with the first of two back-to-back races at the Red Bull Ring. Toby Moody, Simon Patterson and Valentin Khorounzhiy discuss all the major talking points from a busy weekend on and off track, including the rise of Pramac from plucky underdog to race winner with the sensational Jorge Martin, if Suzuki's vital upgrade can get Joan Mir back into title contention, and why the Red Bull Ring always seems to feature scary incidents when MotoGP comes to town.

The day has finally come: Valentino Rossi announced ahead of the Styrian Grand Prix that he will call time on his MotoGP career at the end of the 2021 season. Toby Moody, Simon Patterson and Valentin Khorounzhiy discuss the Italian's decision, look back at some of the moments that defined his iconic career, and look ahead to what to expect from the remaining races of his career.

MotoGP is back! What to expect from the rest of 2021

MotoGP returns from its summer break with a double head in Austria. Toby Moody is joined by Simon Patterson and Valentin Khorounzhiy to look ahead to the rest of the season, working out if anyone can challenge Fabio Quartararo for the title, who we can expect to pick up race wins over the rest of the year, and if Marc Marquez will come back from a few weeks off having taken another step forward with his recovery from his 2020 injuries.

Suzuki won its first title at the top level in MotoGP for two decades last year, as Joan Mir was the man to capitalise on Marc Marquez's absence to take his first championship. This year Marquez is back and not at his dominant best, but another Suzuki title appears increasingly unlikely. Simon Patterson and Valentin Khorounzhiy join guest host Glenn Freeman to look at the factors behind what seems likely to be an unsuccessful title defence, as well as catching up on the news of racing comebacks for GP winners Cal Crutchlow and Dani Pedrosa.

Livio Suppo: How to win MotoGP titles with Ducati and Honda

Livio Suppo has the remarkable achievement on his CV as a MotoGP team boss of tasting championship glory with two manufacturers. The Italian was the man in charge of Ducati when it decided to enter grand prix racing for 2003, and he took the red bikes through a rollercoaster first few years until everything came good with Casey Stoner in 2007. In the years that followed he would switch to Honda, where he tasted championship success again with Stoner, and then the early years of Marc Marquez's dominance of the series. In this incredible interview, Suppo talks host Toby Moody through his career in great detail, all the way from his early experience in the paddock with Benetton in the 1990s, to the role he played in getting Ducati to make the leap into MotoGP, the gambles taken that led to that first title, what it was like working with Stoner, why he switched to Honda, the emergence of Marquez, what led to his departure from HRC and what he thinks of the Japanese firm's current situation in MotoGP.

Why Vinales is ditching Yamaha for Aprilia

Maverick Vinales' sensational exit from Yamaha and expected confirmation at Aprilia is the big topic of the post-Dutch TT edition of The Race MotoGP Podcast.While Fabio Quartararo's imperious, points lead-extending performance is touched upon, host Toby Moody along with Valentin Khorounzhiy and Simon Patterson dedicate most of the episode to the Vinales news.Listen to find out why the podcast crew are more or less unanimously excited about Vinales on an Aprilia, and why him ditching a title-calibre bike for one that is yet to grace a MotoGP podium makes more sense than it would seem initially.There's also a discussion of what Vinales can do for the various facets of Aprilia's MotoGP operation, and whether the Italian marque is right to be committing to the Spaniard instead of continuing to explore the option of filling the seat with Andrea Dovizioso.

MotoGP technology expert Neil Spalding returns to The Race MotoGP Podcast for an in-depth look into the latest tricks being used by Ducati in the Italian manufacturer's quest to improve the aerodynamic performance of its bike - and how it appears to be finally tackling the difficult challenge of creating downforce that can be useful in the corners when the bike is leaned over.

Magic from Marquez and misery for Vinales in German GP

Marc Marquez's sensational German GP victory is the main topic of conversation for Toby Moody, Simon Patterson and Valentin Khorounzhiy, while at the other end of the field, questions are asked about the disastrous turn Maverick Vinales' season has taken since he won at the start of the year in Qatar.

The big talking points from MotoGP's Catalunya Grand Prix are all covered in detail by Toby Moody, Simon Patterson and Valentin Khorounzhiy, from KTM's incredible turnaround after a terrible start to 2021, to Fabio Quartararo's unzipped leathers and why the Yamaha rider needed to be stopped by race control. We also look at Maverick Vinales' busy off-track weekend, which featured both news of a shock crew chief swap and a social media clarification. Plus, how bad have things got for Honda?Finally, there's a chat about the state of Joan Mir's title defence and an update on the state of play in the 2022 silly season, including whether Barcelona moved the needle on Valentino Rossi's retirement decision.

We look back on all the major talking points from a sombre weekend in the MotoGP paddock, and remember Moto3 rider Jason Dupasquier, who lost his life following an accident in qualifying.

Is it time for Valentino Rossi to retire from MotoGP?

Valentino Rossi heads to the Italian Grand Prix at Mugello in the worst form of his MotoGP career. Toby Moody, Simon Patterson and Valentin Khorounzhiy discuss what should be next for the sport's biggest star of the last two decades, and how the championship and Yamaha could possibly come to terms with him deciding to call it a day if that's the choice he makes later this year.Never miss a moment of the MotoGP action with the new BT Sport Monthly Pass with no recurring contract. Find out more here: https://www.awin1.com/cread.php?awinmid=3041&awinaffid=879859&ued=https%3A%2F%2Fwww.bt.com%2Fsport%2Fmonthly-pass

Joy for Miller, frustration for Marquez, despair for Suzuki

Jack Miller made it back to back MotoGP wins in the crazy conditions of Le Mans, so does that prove he's the real deal in 2021 after all the doubts from the early races? Glenn Freeman stands in for Toby Moody as host this week to look back on the French Grand Prix with Simon Patterson and Valentin Khorounzhiy. We also explain why Fabio Quartararo celebrated his third place like it was a victory, if Marc Marquez threw away a real victory shot when he crashed out of the lead, and why Suzuki's weekend was so terrible. ** Catch all the action from MotoGP, Moto2 and Moto3 with the new BT Sport Monthly Pass. Watch on two devices simultaneously and cancel any time - to find out more visit: https://www.awin1.com/cread.php?awinmid=3041&awinaffid=879859&ued=https%3A%2F%2Fwww.bt.com%2Fsport%2Fmonthly-pass

Toby Moody, Simon Patterson and Valentin Khorounzhiy look back on all the MotoGP action from the Spanish Grand Prix at Jerez. They explain how Ducati landed a 1-2 at a track where it has traditionally struggled, what Fabio Quartararo's arm pump problem could mean for his season, and if time is finally up for Valentino Rossi.

Toby Moody, Simon Patterson and Valentin Khorounzhiy discuss if Fabio Quartararo and Yamaha have found the magic formula for 2021 following another victory in the Portuguese GP. We also try to work out what's going wrong for Maverick Vinales on the other factory bike, and the man Quartararo swapped seats with - none other than Valentino Rossi.There's also our verdict on Marc Marquez's racing comeback and what to expect from the Honda rider over the rest of the year, as well as looking at the likelihood of his old rival Andrea Dovizioso making a comeback with Aprilia.

What to expect from Marc Marquez's MotoGP comeback

Following the news that Marc Marquez has finally been cleared to return to racing in MotoGP, Toby Moody is joined by Simon Patterson and Val Khorounzhiy to discuss how fast he can be on his return, and debate whether MotoGP - and his opposition - has changed in his absence.
See More
Comments (3)

This podcast a life saver during the current sporting drought - full of fascinating insight and great to hear the Eurosport commentary team again. Thoroughly enjoyed it!