DiscoverLeading in the Public Interest 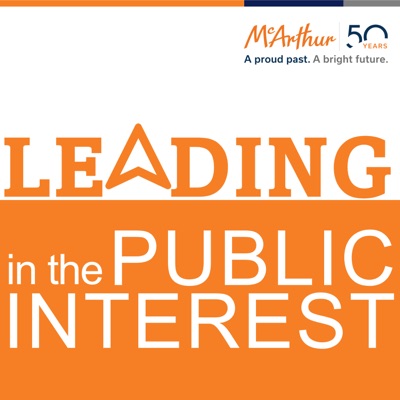 Leading in the Public Interest

Welcome to the McArthur podcast titled “Leading in the Public Interest”. Our podcast series will look at the people and issues involved in the public sector with a focus on local government in Australia."What are the unique challenges of working in the public sector? What does it mean to be a public servant?Each episode will either highlight the role, achievements and career path of senior leaders or will examine an issue of importance to the sector and examine how that affects the lives of Australians.Leading in the Public Interest is brought to you by McArthur’s HR Consulting Division, McArthur Talent Architects.
5 Episodes
Reverse

What does Youth Engagement entail and what can we learn from listening to young people in the community?

In this episode, we discuss Southern Downs Regional Council’s innovative approach to engaging with their younger community members. This episode features Michael Bell, the Manager of Community and Cultural Services, , who was the driver of establishing a youth council and Liam Gow, a previous member of the Youth Council in 2019 and a student at Stanthorpe High School. The podcast discusses how the Youth Council was established, how it functions and the impact it has had on the young people with whom the Youth Council engages. About our guest speakersMichael Bell is the Manager Community and Cultural Services at Southern Downs Regional Council.  Michael is an experienced manager in local government and has been at SDRC for 9 years.  In his role he is responsible for Community Development, Disaster Management and Libraries. He first became interested in the idea of a youth council 2018 and has taken a leading role in promoting the idea of a youth council at SDRC.Liam Gow is a 16-year-old student who is currently enrolled in Stanthorpe State High School. He is interested in pursuing a career in mechatronics (engineering) after completing his high school education. He was a member of the Southern Downs Youth Council in 2019 and is now an ex youth council member. On the youth council he is responsible for representing Stanthorpe State High School and voicing his and his peer’s opinions on what the council could do to better life in the Southern Downs.

In this episode, we talk with Steph Amir and Trent McCarthy, two councillors at Darebin City Council about council’s decision to be the first in Australia to declare a climate emergency on 5 December 2016, what was involved in doing so and the implications. About our guest speakersTrent McCarthy was first elected to Darebin Council in 200 on a climate action platform.  Since then Trent has led the development of Darebin’s climate policy including proposing the world's first government level climate emergency declaration on the 5th of December 2016. Trent is the founder of Climate Emergency Australia a network of 100 Australian councils calling for urgent action by all levels of government.  He is also the co-founder of Darebin’s Solar Saver Programme which is installing solar on 4000 homes and businesses and has a focus on low income households. Trent has championed the development of the Local Government Power Purchase Agreement switching 48 Victorian councils to renewable energy and accounting for 45% of all electricity used by local government. Trent is the proud parent of two primary school student strikers.Steph Amir was elected to the City of Darebin in 2016.  Originally a zoologist, Steph’s decision to run for council was driven by the need for evidence-based decision making at all levels of government.  She is a member of the Merri Creek Management Committee and Chair of the Sex, Sexuality and Gender Diversity Committee.  She has also previously chaired the Darebin Bicycle Advisory Committee and served as a member of the Darebin Nature Trust, Darebin Arts Ambassadors Committee and Melbourne Innovation Centre.On council she has been a strong advocate for improved cycling infrastructure, contributing to the creation of three new bridges, the implementation of the Octopus Schools Program and safety improvements for cyclists across Darebin.  She lives in Preston with her partner and daughter.Darebin City Council was the first Australian council to declare a climate emergency in 2016. The number has risen sharply since then to and over 100 local governments in Australia and New Zealand  have now declared a climate emergency according to the latest data from Cedamia. Globally, over 1,300 local governments have declared a climate emergency.

Leading through challenges to emerge into a new future

In this episode, we talk with Glenn Patterson about how he has led the council through this period of turmoil and how they are planning to emerge into a post COVID-19 future.  About our guest speakerGlenn Patterson is the CEO of Casey Council located in the south eat of Melbourne.  It is one of the fastest growing municipalities in Victoria.  Prior to joining Casey Glenn was the long-serving CEO at Yarra Ranges Council.  Casey Council has faced a number of significant challenges in the last 18 months including being the subject of a yet to be completed IBAC investigation into Council corruption, the sacking of the Council and appointment  of administrators and then the impact of COVID-19.

Reflections on learning, life and career in public service

In this episode, we interview Noelene Duff, an experienced senior leader in both State and Local government management, about her reflection on public service, her professional career and her advice to young public servants.About our guest speakerNoelene Duff retired in 2019 after a career spanning almost 40 years most of which were spent in local government.  Her professional life started in 1981 when she commenced work as a Community Outreach Worker with the City of Collingwood. Rising through the ranks of local government she was appointed to the role of CEO of Whitehorse City Council in August 2000 a position she held for 19 years.She was also appointed by different State Government ministers to a range of positions including being appointed an independent director to the Box Hill TAFE Institute, the Committee on Gender Equity and the Reference Group on Rate Capping. In the Australia Day Honors of 2020, Noelene was awarded a Public Service Medal for her work over a long period of time. Noelene is currently the Interim Administrator for the City of Casey after the council was sacked the Andrews Government in Victoria.

In this episode, we interview Amanda Stone, a Councillor at the City of Yarra Council, about deliberative democracy and how it can enhance the work of local government through engaging and connecting with community stakeholders. About our guest speakerAmanda Stone is a councillor at the City of Yarra. She was first voted on to the Council in 2008 and was immediately elected to the role of Mayor a position she again held in 2016-2017. Amanda began her professional life as a secondary school teacher specialising in the study of psychology in which she was also an assessor. She currently sits on the board of the Yarra Energy Foundation and is the independent chair of the Collingwood Headspace Consortium.   Her passion for finding ways to bring the community together to develop recommendations to councils that will get widespread public support led to her successful application for a McArthur Fellowship.
See More
Comments