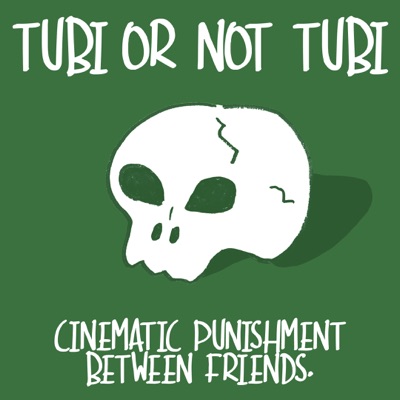 Tubi or Not Tubi

So you're sitting on your couch... Or in your bed... Or on the subway during a 3-hour commute to a generic ceremony that vaguely involves a series of bizarre acquaintances... And you need something to stream.

You stumble across the free film streaming app named Tubi. You marvel at the variety of quality films, many of which no one has encountered before.

You click a title that interests you based on the description.

A dog vomits within the first ten minutes... in live-action.

We made a podcast to experience that so you don't have to.

Join Ceci and Rafiq as they traverse the inner depths of Tubi's vast film library to view, analyze, and evaluate your next favorite (or least favorite) works of cinema.
41 Episodes
Reverse

In this hollow, dry episode of Tubi or Not Tubi, we survey the land in the 2007 film, The Empty Acre, written and directed by Patrick Rea. The labor necessary to cultivate the resources on a farm is a great amount, but what happens when the earth itself refuses to provide? This week, we explore Tubi's take on what needs tubi done in this situation!

In this sneaky, anonymously written episode of Tubi or Not Tubi, we spend our social capital as influencers on the 2021 film, Twisted House Sitter, directed by Courtney Miller. This episode right here is an occasion Tubi celebrated. Why? It's our first review of a Tubi Original Film! Will this be an algorithmic triumph? Or will it leave much Tubi desired? We must investigate!

In this jolly, anxious episode of Tubi or Not Tubi, we prepare for the pageantry of the 2015 film, Christmas Trade, written and directed by Joel Souza and starring Denise Richards and William Baldwin. In this festive holiday-filled month of August, we are tasked to revisit the eggnog. How does the mystical streaming app known as Tubi interpret the film Freaky Friday? Can they actively execute that one proverb about moccasins in a Christmas environment? We evaluate the attempt!

In this episode of Tubi or Not Tubi, we are stepping back into the Great Woods and picking out some exotic flora and fauna to compete in this fourth trial of wills!  Yes, the twofers are here again!

Episode 33: The Huntress: Rune of the Dead

In this mischievous, murderous episode of Tubi or Not Tubi, we endure the stepmother's scheme in the 2012 film, Snow White: A Deadly Summer, directed by David DeCotaeu. Tubi is the kind of app that is filled to the brim with playful adaptions of the world's most popular stories! This fact, while fascinating, leads one to question: Does this trend of constant adaptation need Tubi stopped?

In this magical, adolescent episode of Tubi or Not Tubi, it's a full-blown birthday extravaganza! In this episode, Cecilia, our resident birthday witch, is allotted the power of PICKING from a collection of 25 specially curated films... How lucky or unlucky was her ultimate birthday choice?! Stay tuned to find out!

Episode 30: The Company of Wolves

In this howling, fantastical episode of Tubi or Not Tubi, we traverse the dark woods of the 1984 film, The Company of Wolves, directed by Neil Jordan and starring Angela Lansbury. This is a movie that definitely causes one to wonder... What is Tubi done to those unfortunate souls who stray from The Path? Is it a result Tubi desired?

In this visually stunning Mother's Day follow-up episode of Tubi or Not Tubi, we unlock the secrets of the red rain in the 2016 film, Allegiance of Powers, directed by Michael Krum and written by Gerald Krum. In our recent bonus episode, we took a slight detour into the wondrous world of Sailor Moon anime fillers. This caused us to wonder... What would Tubi even think Sailor Moon if we searched for it? The result was quite exciting.

Mother's Day Special! The Beach, the Island and a Vacation: The Guardians' Break

In this super special minisode of Tubi or Not Tubi, we're honoring the concept of motherhood by delivering the gift of Sailor Moon! And Dinosaurs!

In this frantic, romantic episode of Tubi or Not Tubi, we take a historical journey through the 2017 film, Tulip Fever, directed by Justin Chadwick and starring Christoph Waltz, Judi Dench, and Zach Galifianakis. Tubi is an app that is well known for scraping off and using the kinds of films that get stuck to the bottom of the narrative shoe like a piece of bubble gum. This begs the question: what if the gum is old? Like, period piece old? What happens then?

In this spicy, scientific episode of Tubi or Not Tubi, we learn some harsh truths about global warming in the 2008 film, Heatstroke, directed by Andrew Prowse. Tubi contains an abundance of films in which the entire planet is in some sort of imminent peril. This danger often comes from unnatural disasters or alien invasion. But what happens when the answer is both? It's definitely quite a situation Tubi considered!

Episode 27: Hidden Treasure of the Mississippi

In this murderous, bicentennial episode of Tubi or Not Tubi, we go on a scary journey with Victoria Justice and the Sprouse Twins in the 2008 film, Hidden Treasure of the Mississippi, directed by Robert Moresco. If Tubi knows anything about Mississippi towns, it's that they hold many secrets. With this in mind, we must ask ourselves: Which mysteries will these former Disney Channel stars uncover? What mysteries will remain hidden along the way?

In this celebratory ritual of a Tubi or Not Tubi Episode, we're honoring a full year of cinematic trials and tribulations! In this special episode, we take on the challenging trivia of Quizmaster Pete! We also attempt the unthinkable: Ranking all 24 films we have viewed for this podcast.

In this invasive, hypercharged episode of Tubi or Not Tubi, we witness the extinction of humanity firsthand by viewing the 2012 or 2008 film, Vegas Skyline, directed by Michael Ricks.  Sometimes, Tubi Gives. Many Times, Tubi Takes. This time? Tubi Attacks.

Episode 25: Ghost in the Family

In this Beetlejuicy, paranormal episode of Tubi or Not Tubi, we navigate the purgatory of the 2018 film, Ghost in the Family, written and directed by William David Glenn IV. What happens after you accidentally die? More importantly, what happens if essentially nothing happens after you accidentally die? And MOST importantly, what happens when Tubi attempts to answer these questions? We may not have really wanted to know... But we definitely found out.

Episode 24: The Haunting at Woodland Hills

In this haunting, sprawling episode of Tubi or Not Tubi, we get spooked for the 2013 film, The Haunting at Woodland Hills, directed by Jeremy Casper. Tubi is an app well known to this podcast for its supernatural spellcasting. So if there is a haunting at woodland hills, you can bet Tubi has something to do with it. But one must question the reasoning for this particular haunting? Was it worth it Tubi? Was it worth it?

In this artistic, phantasmagoric episode of Tubi or Not Tubi, we are drilling into the 2015 film, Deep Dark, written and directed by Michael Medaglia. The land of Tubi is filled with numerous deep, dark, holes. So when one particular hole has the courtesy to announce itself, is venturing forth into it a justice? Or is it an omen?

In this conspiratorial, hangry episode of Tubi not Not Tubi, we enter a world-ending battle royale with the 2020 film, Savage Creatures, written and directed by Richard Lowry. If there's one thing Tubi movies have in common, it's that they have both nothing and everything in common. So when a film offers nuns, aliens, cannibals, and vampires, one must ask: What does Tubi even think these things have in common?!
See More
Comments