E075 - Talk with Teddy - Pokemon Go_ The amount of Adult Players is Amazing.

Pokémon Go shattered download and sales records when it was introduced in 2016, utilizing a unique mix of Niantic’s Augmented Reality (AR) technology and Nintendo’s monster-catching franchise. When the mobile video game first debuted, some critics wondered whether the game would be sustainable and attractive to users beyond its fad stage. Two years on, Pokémon Go is showing no signs of going away any time soon, with more than 800 million downloads.

The Tejon Street Corner Thieveshail from the Colorado Rockies. The outlaw blues and trash-grass pioneers forged their original brand of whiskey roots from the ground up. Honing their craft on the streets, they swiftly gained recognition from the music community with the 2015 Gazette “Best of the Springs” award, 2017 Pikes Peak Art Council “Best In Show”, and 2018 Colorado Springs Independent “Best Original Band”. As a nationally touring act, the band has become notorious for their shenanigans and over the top live performance. TSCT’s consistent show schedule and heart filled showmanship has captured the hearts of show goers everywhere. These guys are wild.

E071 -Talk with Teddy - Gay Monogamous Relationship, do they exists_

Rarely do i take on a topic of something too serious and bring it to my show However, I just did! We will be talking with some gentleman about the issues and fear of Monogamy in the gay world of men.Does this exist?Why is it so hard to find?Has gay society gotten so full of themselves they cant see LOVE? With One person?Why cant so many Gay Men find a relationship with just one Partner?What is left for us that want a monogamous Relationship?Special Guests CoHostsKevin & T-RoyJoin me and my 4 guests as we chat about real issues of LOVE in the gay community. ( This topic is not for everyone. Rated R .) If your a guy with old fashion ideas of a house, white fence, a husband to kiss every morning and then at home after work wanting the love of one man? This show may just be one to watch. Issues in all relationship happens but what if your boyfriend or husband says he wants to bring in a third person?

Paranormal Investigator Dave Askew joins Ted & Skeptic Kenny Biddle. They talk about everything about the paranormal

E066 Talk with Teddy - Hillbillies in the Holler - Biggins & Shirley

Biggins and T-Roy his best freidn join us for some out of this world fun. Yeah its hillbilly and its not what yawl would expect but we laughed. and hard..

Singer songwriter Jeff Anderson, joins us for a 90 min conversation about being an up and coming touring recording Artist. Great Guy. I enjoyed chatting with him.

We sit down with a young man from Nashville, TN and discuss his love of music and even hear a few songs. Sunshine James is amazing folks. Country Music Fans will love him. Expect to see him on the big stage in the near future.

https://www.ericvanhoutenmusic.com/*Note there is at least one song missing due to Facebook blocking it though the artist and his music was the focus. Country music singer/songwriter from Nashville by way of Buffalo NY, Eric VanHouten is not your typical country artist. He brings his high energy and new age songwriting styles to life through his music. Sporting an edgy, organic, and authentic sound, Van Houten transforms you to another place when you listen to his music. With a mixture of country/rock that bled into all of his sound, Eric easily sets himself apart from your typical artist. With his rock and roll background, the show he puts on stage is exhilarating, captivating, and entertaining."Our live show is where I really get to connect with the crowd and create an experience for them to never forget. I have always worked hard to make that connection.

https://www.brianayersmusic.com/Brian Ayers is a singer and songwriter performing original and cover material with influences of country, folk, and rock. Based in the Finger Lakes and greater Rochester region of western New York, he's currently working as a solo act, with Chad Ayers as the Ayers Brothers, and in a slightly larger format as the Ayers Brothers Acoustic Band.The Two Feet Between Me And You debuted in 1998 and featured the popular single Road Trip. From 2000-2013, Brian helped write and record 3 albums of original material with Pop/Americana band Blue Jimmy, as well as a most-recent release, Blue Jimmy Live. He's recently enjoyed stints with local acts including Goodness and Steel Rails. Notable past performances have included support roles with Travis Tritt, the Beach Boys, Howie Mandell, Michael Bolton, Shooter Jennings, Roger Clyne, and Steve Holy, among others!

Raised on gospel and radio, as a singer/songwriter/guitarist, David Michael Miller blends the angst of blues, attitude of rock, sexy of soul and storytelling of country into a blend he calls “southern soul” and presents it with his band, Miller and The Other Sinners. Imagine Chris Stapleton hanging with ZZ Top and Tower of Power and you’ve got his sound. Since 2014.Miller has been playing solo, solo/duo and up to 10 piece band shows across 21 states, 2 countries, 250,000+ miles of road and over 1000 shows. With and without his “Sinners”, have opened for such talent as The Steve Miller Band, Joe Bonamassa, Tedeschi Trucks Band, Gary Clark Jr and Eric Gales, and shared festival stages with Gov’t Mule, Mavis Staples, Jon Oates, The Revivalists, The Campbell Brothers and Anders Osborne. Miller and The Other Sinners has lit up festival stages such as Borderland, Muzikfest, Telluride Blues and Brews, Fairport, Lilac, Blues in the Bay, Silver City Blues and many more. Along the way Miller has released two self produced albums, “Poisons Sipped”, and “Same Soil” under his own name, reaching as high as #3 on the Roots Music Report. Miller and The Other Sinners also released a live EP, “3 Nights at the Strand” in 2017 and in June of 2020, their first studio EP, “Rise.”Recently sponsored by Three Chord Bourbon, founded in part by famed producer, guitarist and songwriter, Neil Giraldo, Miller is reaching new markets and festivals while collaborating with Neil musically and in representing the brand. Neil will be producing Miller and The Other Sinners on future projects.

https://www.youtube.com/channel/UC9olGWXYLEqaE0ezSB3xl-Qcheck out Ryan Bauer on YouTube. Ryan Bauer is a 20 year old singer/producer/and engineer born in Upstate NY. Since the age of 1, Ryan has been influenced by music. His father being a avid local musician, and his mother being a great singer, he had no choice but to be around music. Growing up Ryan’s favorite genre of music were rock n roll. But throughout middle school and high school, his music taste shifted to more modern music. Ryan strives to mix all of his favorite genres into one song and loves the challenge. He says “nothing beats making music you love AND your fans love!” His single “Liquor” is a perfect example of how he blended rock with hip-hop seamlessly! This was his second biggest song release independently. Very positive feedback came from the release of that song which gives Ryan room to now create his own lane creating the music he LOVES ❤️

Shane from the Queer Ghost Hunters, Q-Files and an Attorney joins me here on Talk with Teddy. We discuss everything from Ghosts to Gay Rights. Shane is a very intelligent individual with a great sense of humor. Take a second and join us. 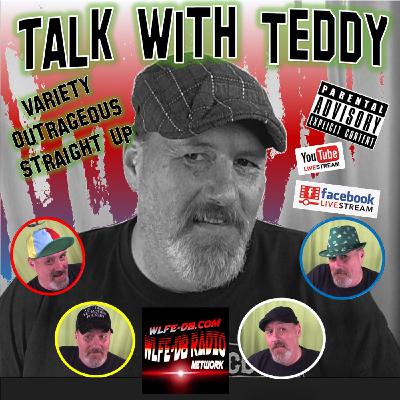 Trent Nielsen Joins us ton chat about his latest involvement with Naked & Afraid and His girl friend Sheri Joy joins him. We cover a wide range of topics as we just sit and chat! We hope you will join us!

Alyssa Trahan is able to blur genre lines with her modern pop production mixed with traditional country instrumentation, winning fans over of all genres. A jill-of-all-trades, singer, songwriter, multi-instrumentalist and audio engineer, Alyssa began making waves in Nashville as soon as she moved from her hometown of East Rochester, N.Y. in 2016. Just two years later, in January 2018, she signed her first publishing deal with Dan Hodges Music. Playing over 100 shows a year, Alyssa is captivating audiences with her energetic live shows opening for like likes of Charlie Daniels, Jana Kramer, Josh Turner, Lee Greenwood, Lee Ann Womack, Midland and many more. Whether it’s solo or with a full band, Alyssa steals the show. Bringing a fresh new sound to country music, Alyssa Trahan is a fresh face force to be reckoned with, follow her at https://www.alyssatrahan.com/.

River Barry has been immersed in the entertainment world for over twenty years. One of the most original and in-demand acts out there, River's style of entertainment emphasizes moving beyond the present moment to help find an equal balance between self and nature, allowing the individual’s movement to be inspired by the moment.A bubble magician and rock balancing artist, He has appeared as himself on A&E Biography's Halloween Show.River has studied with master magicians Jeff Mcbride and Eugene Burger.As a performing artist of bubbles, magic and dance, he is committed to the expansion of personal development and finding the power within. His love for people and uncanny ability to understand their behavior has resulted in the most unbelievable magic act and the ONLY one of its kind in the world.

E042 - Talk with Teddy - Open Floor Topics - Bring on your Questions and Topics.mp3

Paul Cummings is a Firefighter, EMT, Singer/Songwriter, Entrepreneur, husband, and father of 3. From 2008 - 2017, he found a way to combine two passions in life, music and firefighting, to lead a nationwide tour and movement called the “American Firehouse Tour”, honoring his fellow firefighters in times of need. The American Firehouse Tour provided free entertainment to fire departments around the country teaming up with several Nashville icons along the way. The song at the center of the movement was a song he wrote called “The Firefighter Song.” He also spent a lot of time playing across Western New York with his band, Crossroads, making lifelong friends with many members of the music scene along the way.Paul loves the Rochester region. After a decade of traveling back and forth, his love for our region grew stronger which is why he concluded his tour and went into business here in the Rochester area. He most recently opened a business called the Charred Flag Factory and builds approx 750 custom oak flags per year (www.charredflags.com).In his spare time, Paul spends it with his family, studying history, chasing the paranormal, and working on various projects for the future, which include (but aren’t limited to) music, products, and new ideas. In 2020, Paul had plans to form another band and get back to playing around the Rochester region, but those plans have been postponed until 2021 due to COVID-19.Since the pandemic started, Paul opened up his entire catalog for download free of charge at www.pauljcummings.com.
See More
Comments