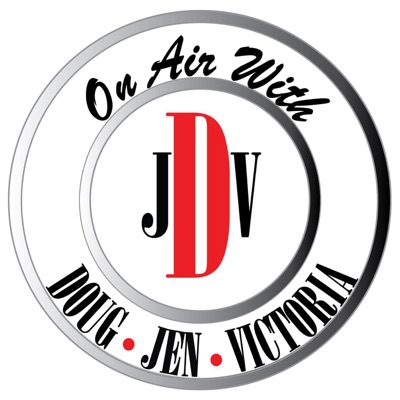 Doug, Jen and Victoria share fun and thoughtful stories from the worlds of pop culture, sports, tech, music and tons more - there's something for everyone on the DJV Show!
870 Episodes
Reverse

Trending today, this year's Met Gala requires everyone to be jabbed and to wear masks indoors. Bo Derek and John Corbett secretly married, after being together over 20-years. Sydney McLaughlin beats Dalilah Muhammad and sets world record to win 400-meter hurdles. Britney says she accidentally locked herself in the bathroom. Also trending, a look at the most hated contestant on "Jeopardy."

Trending today, is Britney married, or isn't she? Actor Megan Fox gave up the drink. The term "Shark Attack" is being replaced by "Shark Interaction." Gwen Stefani express her joy at being married to Blake. Giant horse goes viral with over 11-million views. Also trending, special guest author Michael Levine offers a list of the 10 worst business in America from his new book: "Broken Windows, Broken Business."

Trending today, Binx the cat was rescued alive from the Surfside condo collapse and reunited with his family. Britney's dad spent millions of her money to maintain power over her. Italy is victorious over England in Soccer at Wembley. Alec Baldwin's wife Hilaria is back in the spotlight. Also trending, Mel B talks about 25th reunion of Spice Girls. You can hear this podcast at DJV Show.com, or wherever you get your podcasts.

Trending today, Britney's mother speaks out in support of ending the conservatorship. Cher, Miley and other celebs jump in. People reacting unfavorably to POTUS door-to-door vaccination plans. Learn why Sha'Carri Richardson not selected to compete in the Tokyo Olympics. Also trending, Angelina and Brad battling in court over sale of French wine business.

Trending today, Britney's lawyer and her manager resign. Next, results from a listener poll on China. Scarlett Johansson rumored to be close to delivery of her 1st child with Colin Jost. "The Voice" host Carson Daly officiated at Gwen and Blake's wedding. Also trending, comedian Pete Davidson plans to have all of his tattoos removed by the age of 30.

Trending today, name three couples that tied the knot over The 4h Of July. All about Blake and Gwen's big weekend wedding. New Yorker reporter Ronan Farrow says that Britney's father has made a zombie out of her. Also trending, Mathew McConaughey sounding very much like a gubernatorial candidate in his Independence Day message.

Trending today, Bill Cosby is released from prison, after a Grand Jury tosses his conviction on a technicality. Actor James Franco loses a court battle and has to pony-up $2.2 million. "Smallville" cast member Allison Mack will do some jail time for recruiting young actresses into a sex cult. Also trending, the Britney judge refuses to give her freedom, for the time being.