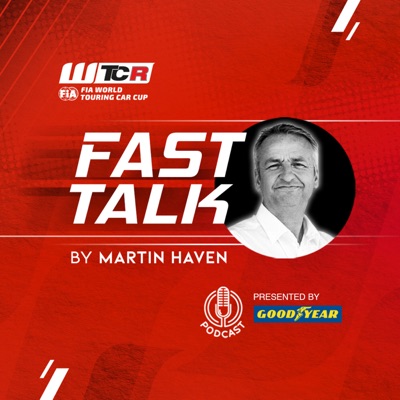 WTCR Fast Talk presented by Goodyear, the official podcast series of the WTCR − FIA World Touring Car Cup from promoter Eurosport Events, is back to preview the hotly anticipated 2021 season.Hosted by Martin Haven, the voice of WTCR and the Eurosport’s lead commentator on the series, the season preview podcast hears from six people for whom delivering results either on or off-track is what gets them up in the morning.

Recently revealed to the world as Cyan Performance Lynk & Co’s exciting new recruit for on-track glory in 2020, 23-year-old young gun Santiago Urrutia tells his story on WTCR Fast Talk presented by Goodyear, the podcast series from Eurosport Events.In his first major English-language interview since being chosen to fill some mighty big World Touring Car shoes as category legend Andy Priaulx’s replacement, Urrutia catches up with Martin Haven, the voice of WTCR, to give fans an insight into his life, how his road to the WTCR − FIA World Touring Car Cup began back in his native Uruguay and why he got “super-mad” with Max Verstappen.“My Grandad give to us a little motorcycle,” Urrutia tells WTCR Fast Talk presented by Goodyear. “At the time I was only three years old, like a baby, but I started just riding the bike around the [family] farm. At one point my Dad said, ‘do you want to race?’ and I start racing when I was three years old. If you think about it they were a little bit crazy, but I started racing motocross until I had a big crash and my Mum said, ‘Santi, this is enough, if you want to keep racing I want to give you a go-kart’. So she took a credit from the bank because it was a really bad year in Uruguay and my Mum is just a school teacher. But she give me the go-kart and I start racing when I was five.”

#15 Gilles Magnus - From indoors to the big outdoors - Part 2

#15 Gilles Magnus - From indoors to the big outdoors - Part 1

Gilles Magnus, the 20-year-old Belgian, is stepping up to the WTCR − FIA World Touring Car Cup this season as a contender for the new Rookie Driver Award.With the support of the RACB National Team, the talent search and development programme from Belgium’s national ASN, Magnus had been set for a second season in TCR Europe. But with WTCR switching to a six-event, Europe-only format for this season in response to the coronavirus pandemic, the opportunity arose for Magnus to graduate to the TCR category’s top tier.

In 2005 Zengő Motorsport gave Norbert Michelisz, then an accomplished online racer, a test at the Hungaroring, his first of many big breaks. Fifteen years later, Bence Boldizs is preparing to follow in the wheel tracks of his illustrious compatriot with a season in the WTCR − FIA World Touring Car Cup.But while Michelisz came to Zengő’s attention through his virtual exploits, Boldizs has impressed in real life, winning in the Zengő-conceived Hankook Racer Cup for Suzuki Swifts via success in various scholarships, before producing a “quite promising by the way” performance when he tested a CUPRA TCR for the Hungarian outfit, an achievement that has effectively earned him a WTCR ride in 2020.

Back in March, Luca Engstler took the TCR Malaysia title for the second year running, a result that should provide a boost, albeit delayed, for when he steps up to the touring car category’s top tier full time with Engstler Hyundai N Liqui Moly Racing Team later this year.As well as spending lockdown with a fifth outright TCR title in the bag, Engstler has used the last four months to train and prepare extensively, focusing on fitness and diet as he builds up to his maiden WTCR campaign in 2020.It will follow one wildcard appearance in 2019, plus one outing as replacement for Augusto Farfus in Macau, where the Brazilian was already committed to defending his FIA GT World Cup title and wasn’t allowed to race in WTCR as well.

Still only 20 and already a multiple title winner in touring car racing, Luca Engstler is one of the many exciting additions to the WTCR ranks for 2020.A contender for the inaugural Rookie Driver Award, Engstler will fly the Hyundai flag in the WTCR − FIA World Touring Car Cup for the team owned by his father Franz, a race winner in the FIA World Touring Car Championship in the past.But as well as being the inspiration for his son’s career behind the wheel, Engstler Sr was also the man who kept it on track when the younger Engstler was contemplating a life away from the sport he was effectively born into.After a torrid second season of ADAC Formula 4 in 2016, Engstler Jr couldn’t see a light at the end of the tunnel. His conclusion, as he tells Martin Haven in part one of this WTCR Fast Talk podcast presented by Goodyear, was to stop.“I never told the story but after those two seasons in Formula 4 I actually wanted to stop because the two years were really frustrating for me,” the former Hyundai Junior Driver says. “I was in school, working hard and preparing as hard as I could [for racing] but we didn’t have the right capacity or the right budget and [we] were always in the back of the grid.“After the last race we went back home, my engineer, my Dad and me in the motorhome. I told them that like this it makes no sense [to carry on]. You try to manage everything as good as you can. But by the end of the weekend you never have the chance to compete against the big teams.“I asked what is the plan, what can we do? My Dad said, ‘there are some tests on Wednesday in the TCR car. Let’s go and try and if we feel like it’s the right way to do it, then we throw everything in and we try it’.”Engstler did “throw everything in” at that Hockenheim test and the rest, as is often said, is history. “That test was really good, I was very fast,” he recalls. “I said, ‘let’s forget those two years and we focus and start from zero again’. I was quite lucky at this time to have this test. Since then the focus is only on touring cars.”That focus carried Engstler to the TCR Germany Rookie of the Year title in 2017, the runner-up spot in the overall standings the following season, plus the TCR Asia, TCR Middle East and TCR Malaysia (twice) titles. He’s also been a race winner in TCR Europe and scored WTCR points when he stood in for Augusto Farfus in Macau last November. Combined, those performances have earned him a full WTCR campaign in a Hyundai i30 N TCR in 2020 when he’s been tipped to shine.

Andy Priaulx is the ultimate example of a racing driver who made the most out of an opportunity, going from relative rags to considerable on-track riches, courtesy of three FIA World Touring Car titles and a whole lot more.Having recently announced his “heart-wrenching” decision to end his WTCR − FIA World Touring Car Cup adventure with Cyan Performance Lynk & Co to focus on helping his son Sebastian’s promising career, Priaulx’s WTCR Fast Talk podcast presented by Goodyear is perfectly timed.What started out as a hobby on his native Guernsey, where everything with an engine appealed − karts, motorbikes, even powerboats were sampled − turned more serious when Priaulx and father Graham took their interest in hillclimbing to another level by contesting the prestigious British championship.

Sweden had celebrated two world champions in rallying but never in circuit racing. Then Thed Björk triumphed in the battle to win the 2017 FIA World Touring Car Championship and promptly joined Björn Waldegård and Stig Blomqvist on his country’s list of motorsport greats as a world title winner.Of a career packed with achievement, the WTCC crown topped them all and will also go down in history for the fact that Björk won the last WTCC title to be awarded before the advent of the WTCR − FIA World Touring Car Cup era for 2018.In part two of his WTCR Fast Talk podcast presented by Goodyear, the 39-year-old explains to host Martin Haven just how he got to be in the WTCC title fight in Qatar in the first place, and the key moments that made the difference during his championship-winning campaign with Volvo Polestar.

When Thed Björk won his first FIA title in 2001, celebrations at the governing body’s gala in Monaco were somewhat low key.After receiving a trophy for his FIA Sportscar Championship SR2 category triumph, identical in shape and size to the one Michael Schumacher was handed for becoming Formula One world champion, Björk couldn’t afford the price of a Coca-Cola, such were his early struggles.It was a different story in 2017. Part of the factory Volvo Polestar line-up, Björk had beaten Nobert Michelisz to the FIA World Touring Car Championship in a tense finale in Qatar. He was in Paris a few weeks later to pick up his trophy at the FIA Prize Giving Ceremony.

We resume our chat with Attila Tassi.

Attila Tassi was never destined to be a racing driver. There was no previous family involvement, while ice hockey satisfied his competitive instincts from the age of five. But two events triggered a change of direction for the boy from Budapest, as he tells host Martin Haven in part one of his WTCR Fast Talk podcast presented by Goodyear.A “very big crash” on his BMX bike left him with a fractured skull and parents hoping he’d consider an alternative pursuit. Around the same time, a family holiday − to the Abu Dhabi Grand Prix of all things − gave him the opportunity to try a go-kart for size. It was the start of his motorsport adventure that will continue in 2020 when he joins Honda-powered ALL-INKL.DE Münnich Motorsport for a second season in the WTCR − FIA World Touring Car Cup as team-mate to Tiago Monteiro.

We resume our chat with Nicky Catsburg. The Dutchman continues his recollections of a career that began as a reward for not smoking and has included winning an FIA world championship motor race in addition to a host of other successes in endurance racing.

Essentially, Nicky Catsburg started out on his motorsport adventure because he didn’t smoke. And, as he also tells Martin Haven during the latest episode of the WTCR Fast Tallk podcast series presented by Goodyear, he followed quite an unconventional path to the WTCR − FIA World Touring Car Cup, where he’ll race with Hyundai power for a second season in 2020.

We resume our chat with Néstor 'Bebu' Girolami.

Néstor Girolami got his first go-kart aged three but cried when the engine was fired up. Aged four, in 1994, he was leading a race when he stopped to take a pee on the final lap. But fast-forward to 2020, and the man they call ‘Bebu’* will be among the elite pack of FIA World Touring Car racers vying for the WTCR title when the brakes come off the eagerly anticipated third season in September.

We resume our chat with Yann Ehrlacher.In part two of his WTCR Fast Talk podcast presented by Goodyear, Yann Ehrlacher tells host Martin Haven how a phone call led to a first WTCR test at a snow-hit Oschersleben, a drive with ALL-INKL.COM Münnich Motorsport in the inaugural 2018 season, two wins before a move to Lynk & Co power for 2019 where he became a team player in more ways than one.Ahead of the delayed 2020 season getting underway, Ehrlacher also talks about the tough times he’s experienced racing in WTCR, how simracing is helping with the “pressure” and why ice racing is much more difficult than it might look.
See More
Comments