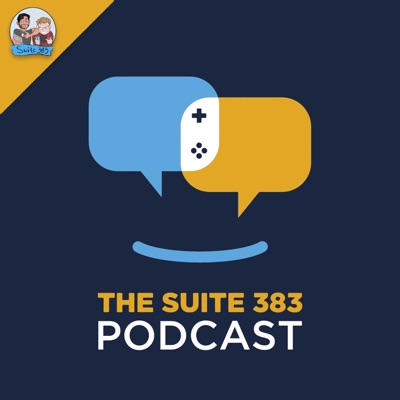 Welcome to the Suite 383 Podcast, a weekly podcast by best friends and former roommates Shaunak and Eric. Named after the dorm where they met, this podcast is a peek into the duo’s thoughts. Every week, Shaunak and Eric talk about what has caught their attention in the wonderful world of Tech, gaming, and pop culture.
49 Episodes
Reverse

Back after an impromptu break, the guys talk about Ghosts of Tsushima, the Apple betas, and the latest Avengers War Table

Episode 54: The PS5 Has Been Revealed.

The Sony PS5 games showcase did not dissapoint. Shaunak and Eric go through all the games that were revealed, and give their first impressions. Sony decided to show us what the console looks like, and both Shaunak and Eric are digging it.

Episode 53: #BlackLivesMatter First and foremost, we - and I am going to speak for the both of us here - unequivocally support the Black Lives Matter movement. Over the past couple weeks, we have seen an unprecedented coming together of people from all states and backgrounds to support this singular idea, “Black Lives Matter”. The unfair targeting of black people by police in this country is a disease, and it needs to be cut out as soon as possible. We did not release an episode last week because it simply felt wrong to chat about superficial things like Apple rumors, or video game news when there were much more important conversations being had online. The show notes contain links to a whole lot of resources to learn, and also places where you can help the movement. Apple’s moving to ARM, Shaunak wants a creative mode in Animal Crossing, and there's now a fantastic official Last of Us Podcast. Black Lives Matter Ways To Help (https://blacklivesmatters.carrd.co/) 10 Books About Race To Read Instead Of Asking A POC To Explain It To You (https://www.bustle.com/p/10-books-about-race-to-read-instead-of-asking-a-person-of-color-to-explain-things-to-you-8548796) 24 Podcasts That Confront Racism in America (https://bellocollective.com/16-podcasts-that-confront-racism-in-america-f8f69baf529d) George Floyd, Minneapolis Protests, Ahmaud Arbery & Amy Cooper | The Daily Social Distancing Show (https://www.youtube.com/watch?v=v4amCfVbA_c) Anguish and Action - Obama Foundation (https://www.obama.org/anguish-and-action) Apple’s Cook Says ‘Painful Past Is Still Present Today’ in Memo (https://www.bloomberg.com/news/articles/2020-05-31/apple-s-cook-says-painful-past-is-still-present-today-in-memo) Fantastic Patriot Act Episode (https://youtu.be/i_FE78X-qdY) EA and the NFL extend exclusive partnership for Madden games until 2026 (https://www.theverge.com/2020/5/28/21273960/ea-nfl-madden-games-extend-renew-license-2026) Apple will announce move to ARM-based Macs later this month, says report (https://www.theverge.com/2020/6/9/21284960/apple-arm-based-macs-wwdc-2020-report-intel-laptops-desktops-power-efficiency) Steve Jobs Video: https://www.youtube.com/watch?time_continue=483&v=ghdTqnYnFyg&feature=emb_logo (https://www.youtube.com/watch?time_continue=483&v=ghdTqnYnFyg&feature=emb_logo) Introducing “The Official The Last of Us” Podcast Series (http://play.st/2zim7gN) Rumour: Animal Crossing: New Horizons Has Reportedly Been Downloaded More Than 10 Million Times (https://www.nintendolife.com/news/2020/06/animal_crossing_new_horizons_has_been_downloaded_more_than_10_million_times) Join the Discord! (https://discord.gg/9kBXV9x) Website (https://suite383podcast.com) Show Twitter (https://twitter.com/Suite383Podcast) Shaunak’s Twitter (https://twitter.com/ShaunakKulkarn1) Eric’s Twitter (https://twitter.com/EricBromund) Instagram (https://www.instagram.com/suite383podcast/)

Episode 52: Through the Apple Glass

The Sequels: The Skywalker Saga EndsThe end of the Skywalker Saga is upon us! Shaunak and Eric are joined by fan of the show (and Shaunak’s brother’s friend) Ben (Kenobi) to go over what fans call the Sequels or the “Disney Trilogy”. The trio go over what they liked, didn't like, and what parts just did not make sense to them. They unanimously decide that these three aren’t bad, but they are just a little bit disappointing. As usual, they rank the the movies within the trilogy, and the results might surprise. Next up - the Anthology films (Rogue One, Solo) and their final individual rankings. Interact With Us!Join the Discord!WebsiteShow TwitterShaunak’s TwitterEric’s TwitterInstagram

Episode 51: No One Cares About Abstergo

Shaunak is back from his coronacation in the warmth of Houston, Texas. Playstation released an 18 minute video on Ghosts of Tsushima, and both Shaunak and Eric are extremely hyped for this game. The game news doesn't stop there - Ubisoft announced the new Assassin's Creed: Valhalla which has the guys intrigued. Who doesn't like Norse mythology? Links: Ghosts of Tsushima State of Play Assassin’s Creed Valhalla Assassin’s Creed Valhalla Trailer Join the Discord! Website Show Twitter Shaunak’s Twitter Eric’s Twitter Instagram

The Prequels: We’ve Got a Bad Feeling About ThisThe time has come for Shaunak and Eric to go through and rank the much maligned and wholly meme-tastic prequel trilogy. The duo go over what they liked, didn't like, and what did not make sense. They spend some time wondering how munch better these movies would have been if anyone but George Lucas wrote and directed them. Also, Eric notices that nothing about Padme’s pregnancy in Episode 3 makes any sense. Does prenatal care not exist in the Star Wars universe? Interact With Us!Join the Discord!WebsiteShow TwitterShaunak’s TwitterEric’s TwitterInstagram

Episode 46: The Unofficial WWDC PresentationShaunak and Eric finally played enough of Jedi Fallen Order to give their thoughts on it. Spoiler- both liked the game. The duo then go on to talk about some unexpected, but also completely expected Apple announcements. The two talk about the spec "war" between the PS5 and the Series X, and what the numbers might actually mean when in game. The guys round out talking about what the future of in person conferences will be. Links: Apple announces new iPad Pro with trackpad support and a wild keyboard cover Apple announces new MacBook Air with improved keyboard, faster performance, and more storage Apple updates Mac mini with double the storage https://www.ign.com/articles/ps5-xbox-series-x-teraflops-arent-the-only-measure-of-power Interact With Us!Join the Discord!WebsiteShow TwitterShaunak’s TwitterEric’s TwitterInstagram

Episode 43: What Even is a Teraflop?In a fairly chilled out episode, the duo start by talking about some slang that they have aged out of and do not understand. Microsoft released some official specs for the Series X, and Shaunak and Eric have some thoughts on what that means for the PS5. The two nerd out over the tech used to film The Mandalorian, and speculate on what the future of video game cutscenes is going to be. Links: Xbox Series X SpecsXbox Smart Delivery Details ARM Mac in 2021?Awesome Article on how The Mandalorian was filmedInteract With Us!Join the Discord!WebsiteShow TwitterShaunak’s TwitterEric’s TwitterInstagram

Episode 42: This is Tom Nook's World and We're Just Living in ItIn a departure from their regular recording day due to Shaunak falling ill, the duo return for another news filled week. First things first, Shaunak is super hyped about getting Carplay installed in his car. The guys talk about how extremely hyped they are for the new Animal Crossing game for Switch. They wrap up discussing some new developments in the world of Apple. Links: New Batman CostumeRumored March event Apple leaked products in Target inventoryiOS 14 Default AppsInteract With Us!Join the Discord!WebsiteShow TwitterShaunak’s TwitterEric’s TwitterInstagramFind out more at https://the-suite-383-podcast.pinecast.co

Episode 40: Adolescent Yoda or Bust! Shaunak is deep into RSS feeds and mass unfollowing accounts on Twitter. The guys react to the report of Playstation waiting on Xbox to price the PS5, while maintaining that there's no chance the PS5 will be less than $500. Both of them are in awe at the rumored pricing for the new Galaxy phones, but also fawn over leaked videos of the Galaxy Flip. We finally got a trailer for some of the Marvel Disney+ shows, and Shaunak and Eric are super hyped. And as always, Nintendo has done something dumb and neither Shaunak nor Eric are going to let them slide. Links: Galaxy Flip VideoPS5 Launch Pricing speculationGeForce Now is out of betaMarvel release dates for Disney+Wandavision, Loki, Falcon and the Winter Soldier Teaser Interact With Us!Join the Discord!WebsiteShow TwitterShaunak’s TwitterEric’s TwitterInstagramFind out more at https://the-suite-383-podcast.pinecast.co

Episode 38: We’re All TemTem TamersThe guys talk about a new game that is making some waves in the Pokemon community, TemTem. It's also potentially Eric's Ideal Game. They talk about some Playstation Exclusives coming to PC, and how that may translate to the Next Gen. Shaunak's goes through the iCloud encryption scandal, and declares that he's on the hunt for PSN Platinums. Links: Eric’s ideal game: TemTemTemTem TrailerInteract With Us!Join the Discord!WebsiteShow TwitterShaunak’s TwitterEric’s TwitterInstagramFind out more at https://the-suite-383-podcast.pinecast.co

Episode 37: Sorry for the DelayJust a quick PSA- Shaunak and Eric have made the difficult decision to postpone this episode because they felt it needs more polish .... jk, but they do talk about all the delays that are hitting some of the years most anticipated games. They also react to the report that the new Xbox won't have any exclusives. The guys predict when we might lay eyes on the PS5. Of course, there is discussion about Nintendo, and the 2 Directs that occurred in the last few weeks. The customary Switch feature wish-casting is also present. Also- This episode has Spoilers for the Crisis on Infinite Earths crossover on the CW, if you care about that show. Links: Sony Skips E3No Xbox Series X Exclusives???Games are getting delayedCyberpunk DelayedNew Assassins Creed?Morbius TrailerInteract With Us!Join the Discord!WebsiteShow TwitterShaunak’s TwitterEric’s TwitterInstagram

Episode 36: Completing the CircleHello! Welcome back to the Suite 383 Podcast. The guys are back from an impromptu holiday break to discuss many things. They talk about the Rise of Skywalker and The Mandalorian, so Spoiler warning in advance. They also discuss some of the early standouts at CES, and talk about the most innovative logo reveal of all time; the official PS5 logo.Links:https://www.theverge.com/2020/1/5/21050725/ces-2020-news-announcements-products-tech-gadgetsInteract With Us!Join the Discord!WebsiteShow TwitterShaunak’s TwitterEric’s TwitterInstagram

Episode 34: Highs and LowsWelcome to Episode 34! Eric gives his first official review of Pokemon Sword/Shield. Spoiler- he likes it. Shaunak talks about how disappointed he is at how Google Stadia has turned out and that he doesn’t have a compelling reason to get the controller. He is then cheered up by Dualshock 5 leaks. The duo discusses the new iPhone battery case with camera button and how it’s a niche case, but they both want one. They end on discussing the nominees for The Game Awards, and try making some very unqualified predictions.Links about things discussed:https://www.theverge.com/2019/11/19/20973139/google-stadia-launch-codes-founder-unique-name-cloud-gaminghttps://www.theverge.com/2019/11/18/20970297/google-stadia-review-gaming-streaming-cloud-price-specs-features-chrome-pixelhttps://www.ign.com/articles/2019/11/20/ps5-controllers-possible-design-details-beyond-episode-618https://www.theverge.com/2019/11/20/20974475/apple-iphone-11-pro-max-camera-smart-battery-case-shortcut-buttonhttps://thegameawards.com/nomineesSocial Links:Join the Discord!WebsiteShow TwitterShaunak’s TwitterEric’s TwitterInstagram
See More
Comments (1)

As both a geek and someone who has recently graduated college, the conversations here are very personable and, well, even comforting in a lot of ways. A nice casual listen about tech and entertainment during your downtime--with some laughs sprinkled in between. My new go-to when I'm feeling the need to just listen to something both chill and stimulating.