A look at the Southern migration of workers from the rural south to Akron, Ohio in search of jobs and new opportunity.

Find out more about Roots of American Music: www.rootsofamericanmusic.org

Join Calvin Reborn from the Akron Sound Museum and host Clint Holley as they explore the birthplace of the punk scene in Akron from the 1970’s to the present. Our musical guest is Roid Rage.

Sojourner Truth gave her famous "Ain't I A Woman Speech" in Akron, Ohio in 1851. Join host Clint Holley as he discovers how that speech still resonates today through the craft of quilt making.

A chance encounter between two alcoholics in Akron, Ohio led to the founding of Alcoholics Anonymous. Explore these connections and enjoy songs from musical guests The Bogtrotters.

Host Clint Holley compares interviews with Joe Mosbrook and Theron Brown in order to tell the story of the rich Jazz history found in Akron , Ohio. Hear stories about historic Howard Street, The Hotel Matthews as well as what is happening in Akron now with events such as The Rubber City Jazz and Blues Festival.

The G.A.R. Hall is is a building block of the Northeast Ohio music scene. In this episode we find out how this historic building came to become a hub for live music as we interview Karen James Walters. Musical guest is gutsy roots singer and G.A.R. regular Rachel Brown.

ROAM teaching artist and activator of spaces, Kyle Kidd talks about the challenges artists are facing as the corona virus pandemic lingers on but shares and upbeat outlook as artists overcome challenges in order to continue creating.

Join Roots of American Music's Artistic Director Kevin T. Richards as he discusses the struggles of leading a nonprofit arts organization during the COVID-19 pandemic, and the new ways that ROAM is bringing music to its audiences. Kevin shares his perspective on the pandemic’s impact on musicians, as well as how programming is being reimagined to bring music to the community from a distance.

Jason Meyers, another popular local musician and ROAM teaching artist, talks about how his life has changed: cancelled gigs, his day job as a hospital therapy program coordinator and father to a newborn. He also shares what inspired some new songs he performs for this episode.

Juliana Tabor, a ROAM teaching artist and kindergarten teacher, talks about how technology is giving her a new perspective as she navigates the pandemic. Forming new, present-day relationships with her students has brought an unexpected closeness and intimacy.

In March of 2020 the Coronavirus upended the entire globe and the live music was brought to a halt. The Pandemic Tapes explores this crisis through interviews with musicians and by sharing songs they have written and recorded during "stay at home" orders. Cleveland folk musician Charlie Mosbrook is the featured artist in episode 1.

Hotz Cafe is a Cleveland landmark. Hotz is a small neighborhood tavern in the Tremont area of Cleveland, Ohio. First opened in 1919, Hotz recently celebrated 100 years of family ownership. Join Clint Holley and musical guest The Luckey Ones as we interview members of the Hotz family and record the band while the bar is open for business.

Johnny Kilbane was a world champion featherweight boxer from Cleveland Ohio and held his title longer than did any other fighter in any weight class in history.  Born into poverty in Cleveland’s Irish Immigrant ‘Angle’ neighborhood, Kilbane eventually leveraged his celebrity, determination, and smarts into a successful political career – holding public office in Columbus and then in Cleveland, Ohio.    Kilbane’s early life and career teach us great lessons about the immigrant experience – specifically concerning the Irish, but also lessons that apply generally to all those who have left their homes behind and journeyed to America in search of a better life.  No doubt, a ‘fighting spirit’ served Johnny Kilbane well during his well-lived life and a similar spirit has buoyed the prospects of  many of those who came before us from every corner of the globe.     Roots Music Revue: “A Fighting Heart” is part of ROAM’s program called The Ohio Heritage Music Project, whose mission is to re-imagine music production in order to document, preserve and build awareness of regional music. Roots Music Revue is funded, in part, by the Ohio Arts Council.

Robert Crumb is an American cartoonist and musician. His work displays a nostalgia for American folk culture of the late 19th and early 20th centuries, and satire of contemporary American culture. His band Robert Crumb and the Cheap Suit Serenades released 3 albums on the Blue Goose record label, featuring pre-war acoustic blues, rags and old time classics. Crumb is a prolific artist and contributed to the publication, Zap Comix. Inspired by psychedelics and cartoons from the 1920s and 1930s, he introduced a wide variety of characters that became extremely popular, including cultural icons Fritz the Cat and Mr. Natural, and the images from his Keep on Truckin' strip. In this episode, we explore Crumb's time working for American Greetings in Cleveland, Ohio at the now iconic 78th Street Studios building. Special musical guest: Tim Easton.

Recorded at the Frank Lloyd Wright-designed Louis Penfield House on River Road in Willoughby, Ohio. Listen to the history behind this home, the families who live in it, and the rare, final blueprints Frank Lloyd Wright created for an additional house that was never built. Music performed by David Childers, North Carolina’s most prolific living songwriter. This is ROAM’s first podcast in the Ohio Heritage Music Project Series. Stay tuned for more to be released soon! Roots Rearview and the Ohio Heritage Music Project is generously supported by The Ohio Arts Council and Cuyahoga Arts and Culture. 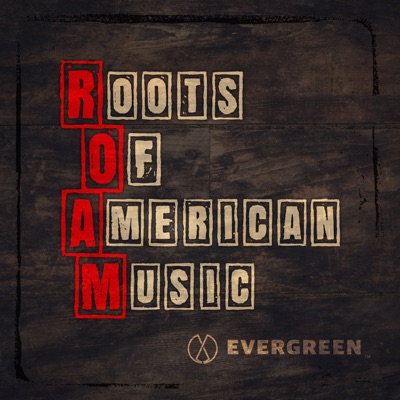 Since recording this episode Morgan Mecaskey has been named Creative Director for ROAM. At the time of recording this hadn't happened yet, so you won't hear anything about it. What you will hear is Morgan along with host Craig Lyndall and Jason Myers discussing the unsung guitar makers, dubbed the "Gals of Kalamazoo," who crafted guitars during the war in the 1940s. Their story is now, finally, being told.

The Roots of American Music is proud to welcome Dr. William Woods and Reggie Bowens to the new Lift Their Voices series. "Lift Their Voices” - LTV for short - is a community program to highlight voices from marginalized communities and expand awareness. LTV is funded by The Ohio Arts Council and Cuyahoga Arts and Culture in partnership with Roots of American music.  Our series runs parallel to the monthly Roots of American Music concert series at the Music Settlement Bop Stop. Today, we are interviewing a student and his teacher. The Reggie Bowens Quartet will play at the Bop Stop on Sunday, March 13, from 2 pm until 4:30 pm.  Today's episode talks about music and teaching it across generations.

The Roots of American Music is proud to welcome Charlie Mosbrook and Mark Freeman to the new Lift Their Voices series. "Lift Their Voices” - LTV for short - is a community program to highlight voices from marginalized communities and expand awareness. LTV is funded by The Ohio Arts Council and Cuyahoga Arts and Culture in partnership with Roots of American music.  Our series runs parallel to the monthly Roots of American Music concert series at the Music Settlement Bop Stop. Today, we are interviewing the musicians who recently performed their original songs.  Today's episode tackles the topic of Adults with Disabilities and the passing of the Americans With Disabilities Act. These artists who give their unique voices to this issue are Mark Freeman and Charlie Mosbrook. They have written songs and put together an inspiring story about the "Gang of 19”.
See More
Comments